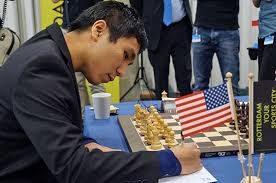 Wesley So wins US Chess Championship

Philippine-born Grandmaster Wesley So captured the 2020 US Chess Championship in an epic performance on Friday (Manila Time) and brought home the $40,000-prize money (P1.9 million).

So earned the distinction of tying Robert James “Bobby” Fisher’s feat in1966, finishing 9 points in 11 rounds. Fisher (1943-2008) was the eleventh world champion.

“It feels great. I am very happy. This is a very prestigious tournament. Hopefully, next year we will play on board. I don’t think I can be compared with Fisher,” So said.

So first won the tournament in 2017, defeating in a tie break GM Alexander Onischuk.

Wesley So seeks second US Title

Grandmaster Wesley So shoots for his second title as he competes in the 2020 United States Chess Championships set to unwrap on Tuesday.

The 26-year-old So, born in Cavite but is now based in Minnesota, has won the annual event three years ago where he edged Alexander Onischuk in a rapid playoff showdown and will be all out to repeat this year.

“Looking forward to playing against some of America’s best players in the US Chess Championships,” said So on his Facebook page Sunday.

A former professional chess player criticizes the ABC for contacting him to discuss whether the board game is racist.

Mr. Adams told Ben Fordham the argument has been circulating in chess circles for years.

“All of this stuff is completely ridiculous.

“We’ve got bigger issues that are facing Australia, and I don’t want the ABC talking about this sort of nonsense.”

Mendoza and Cuizon capped the country’s strong effort in blitz where it outperformed Vietnam with a better gold count, 17-12, in the event organized by Chess Events International, sanctioned by the NCFP under Butch Pichay, bankrolled by the Philippine SportsCommission and backed by Davao City Mayor Sara Duterte. Ruelle Canino (girls U10), Rhenzi Kyle Sevillano (U20), Darry Bernardo (U18), FMAlekhine Nouri (U16), Francois Marie Magpily (girls U16), and WFM Allaney Jia Doroy(girls U18) provided the other individual victories for the country.

The last day assault enabled the country to salvage some measure of pride after Vietnamlorded over the standard and rapid sections with a gold haul of 18 and 20 against the former’s 10 and eight, respectively.

Cebuano woodpushers are losing grip in their stints in the standard division of the 19th ASEAN+ Age Groups Chess in Davao City.

Among the Cebuano bets in the meet, only Vic Glysen Derotas, the 14th seed in the girls’ under-18 division, improved her rank, climbing from the ninth spot to the fifth spot after the seven rounds of the competition following an upset win over fourth seed and Women’s Fide Master (WFM) Vo Mai Truc of Vietnam yesterday.

However, it seems that the Vietnamese are still in full control of the standard division as two of its Chessers, Kieu Bich Thuy and WFM Tran Phan-Bao Khanh, still lead the under-18 girls with 6.5 and 4.5 points, respectively.

WFM Allaney Jia Doroy of the Philippines is at third with 4.5 points.

Velarde is now placed at sixth with just two rounds remaining. Vietnamese players occupy the top three spots in the under-12 division. CM Vu Hoang Gia Bao is at second with 5.5 points while Bui Dang Loc is at third with 5.0 points.

Rhenzi Kyle Sevillano has 3.5 points as he currently holds on to the eighth spot in the under-20 division after settling for a draw versus Fide Master (FM) Catur Adi Sagita of Indonesia in the seventh round. At the same time, Alpaca Gonzales dropped to 11th in the current rankings with 4.0 points in the girls’ under-16 division after losing to fellow Filipino Chesser Francois Marie Magpili.

In the girls’ under-20 category, Laila Camel Nadera is stuck at 11th place with 2.5 points after losing to WFM Vu Thi Dieu Ai of Vietnam.

In the boy-under 14 division, Jave Merrick Peteros was dislodged from his eighth-place position. And is now placed 12th after losing to CM Lam Tung Nguyen of Vietnam. Regina Catherine Quiñanola also lost her sixth-place position in the girl’s under-14 division. And dropped to ninth after she got defeated by Jerlyn Mae San Diego in the seventh round. She has 4.0 points.

Chess Philippines Wesley So and other treasures

The roller-coaster ride that sports have taken recently seems to best capture the dilapidated condition of the Chess Philippines’ athletic program.

In doing so, Wesley So ruled the US chess championship and stretched his unbeaten run to 67 games. Before then, he triumphed in the Tata Steel chess tournament, in which the world’s best grand-masters participate. The Cavite-born wonder is now No. 2 in the world rankings.

Just over the weekend, Marlon Tapales surrendered his WBO bantamweight crown without even stepping into the ring after failing to make the 118-pound limit for the division. His opponent, the Japanese Shohei Omori, branded Tapales—and rightly so—“unprofessional.”

Tapales managed to salvage a measure of pride by eventually beating Omori in their bout via an 11th-round TKO. Still, he flew home a king without a crown.

Somewhere in the middle of all these, the Palarong Pambansa opened under a cloud of troubling urgency.

These are three different stories. However, if one were to write a work of fiction based on these stories, one would come up with a predictable conclusion neatly tied to a never-ending lament. In conclusion, the country badly needs a reinvigorated sports leadership, and that need will never be met given a Philippine Olympic Committee that continues to practice patronage politics.

Wesley So was once the pride of Philippine chess. His development and nurture would have cost the Philippine Olympic Committee a fraction of what it spent hosting festivals for Asian Olympic officials. Thus, his eyes firmly on the prize of becoming the best in the world, So seek out a stronger program were and would not neglect his talent. He is now part of Team USA.

The young man’s current assault on the world chess rankings indicates that he will reach the summit in the not-too-distant future. And while he has always acknowledged his Philippine roots—he never fails to remind everyone that he has dual citizenship, that he is Filipino-American—there will be only one flag attached to his name when he becomes No. 1. And it won’t be the one with three stars and a sun.

How did we lose such a national treasure? Simple: neglect and indifference. Once upon a time, sports officials almost managed to push weightlifter Hidilyn Diaz into quitting her sport. Had it not been for her coach’s constant prodding, we would have lost a silver medalist in the Rio Olympics. You’d think Philippine officials would have learned from that, but no: They came so close to running—pun intended—top marathoner Mary Joy Tabal off the national team.

On a smaller scale

Above all, on a smaller scale, consider how Team Tapales handled the boxer’s title defense. Above all, amid concern over excess pounds leading up to the weigh-in, his handlers kept insisting there was no problem. When they finally admitted that their ward was in danger of missing the grade. They subjected him to an intense crash diet. That led observers to ask if he would have enough in the tank even if he made weight.

In a physically demanding and risky sport like boxing. Making the weight should have been the easiest task on Team Tapales’ checklist. All his handlers needed to do was draw up a sound program for the boxer to follow. It took a burst of pride and the summoning of inner strength for Tapales to win the bout. But having failed at the scale, he was already stripped of the title—and the chance to keep it—before fight night.

In addition, so here we are, with the Palarong Pambansa opening in the shadow of a worrying statistic. Fewer students are getting into sports. Who can blame them? While other countries nurture their national athletes the way they should be, ours are turned into pawns for personal ends. How will that encourage the young and talented to dream of representing the flag and country in international competitions?

Above all, we may yet uncover other gems in the Palarong Pambansa: prodigious youngsters, athletes with a hunger that aa can sate only by success on the world stage. However, all that talent and capability will go to waste if we let uninspiring, overstaying leaders continue to control the national sports program.