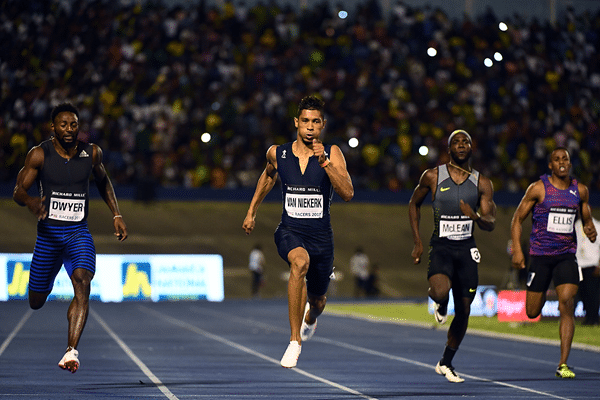 Celebrated athletics coach Tannie Ans Botha has opened up about her high-profile parting of ways with long-time protégée Wayde van Niekerk a few days ago and insisted there is no bad blood between them.

Two male track athletes have a shot at the 400m record:

Being the current record holder, Wayde is only 26 years old and will probably 27 by the start of the 2020 Olympics. He is basically still in his prime. He is the only problem he is coming off a serious knee injury he suffered in a rugby match in 2017.

My money is personally on Micheal Norman to break the record.

Usain Bolt chose to succeed him as the athletics king has wrecked his knee playing rugby. Wayde van Niekirk, the Olympic and world 400 meters champion and the world record holder, will be sidelined for the next 6 months.

“I was looking forward to competing in the 100m and 200m events in Gold Coast and participating at the national championships in March, so this is unfortunate timing,” said Wayde Van Niekerk, who will undergo surgery in America.

Wayde Van Niekirk had opted to compete in the 100 and 200 and rest from the 400 at the Commonwealth Games.

It means South Africa’s newly married track sensation, who has torn his anterior cruciate ligament, misses the Commonwealth Games in Australia next April.  The 25-year old also sustained medial and lateral tears of the meniscus whilst playing in a celebrity touch rugby match in Cape Town.

World 400 Record Holder and Olympic Champion 24-year-old Wayde Van Niekirk of South Africa broke his 100 PB with a 9.94 (+0.9) run. And did this at the International Meet at Velenje, Slovenia, on June 20. This time Wayde Van Niekirk shaved 0.04 off his PB.

He had previously lowered his 200m best to 19.84 ten days ago in Kingston.

Its my best time and I’m glad the competition ended the way I wanted it to. This also bodes well for my main two distances. He said.

Emile Erasmus and Heinrich Bruinjies finished 2nd and 3rd, both also from South Africa. Van Niekerk has the best time of 43.03 in the 400. And will contend the 200 and 400 events at the world champs in London in August.

It was good to see smaller nations such as Kosovo and Macedonia participating and setting new national marks. 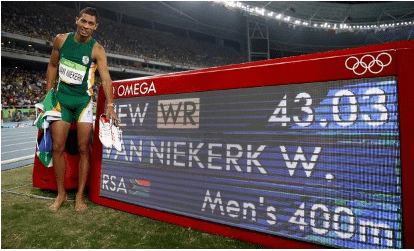 Wayde Van Niekirk had moved up from being a 100,200 runner as a junior to the 400. In the Olympic final. He pulled away from former Olympic and World champions Kirani James (Grenada)  and La Shawn Merritt (USA) 43.76 and 43.85, who strained together next to each other for silver and bronze.

Former sprinter Ato Boldon and now sports analyst predicted the 400 meters would be the high-performance event these games and the world record would go. Van Niekirk truly is looking at succeeding Bolt as the face of men’s sprints bringing back excitement to the quarter-mile.

Even Johnson thought so. In comments for the BBC – he’s a track and field TV analyst for them – Johnson said: “Oh my God! From lane eight, a world record.

He took it out so quick. I have never seen anything from 200 to 400 like that. “That was a massacre from Wayde van Niekerk. He just put those guys away.”