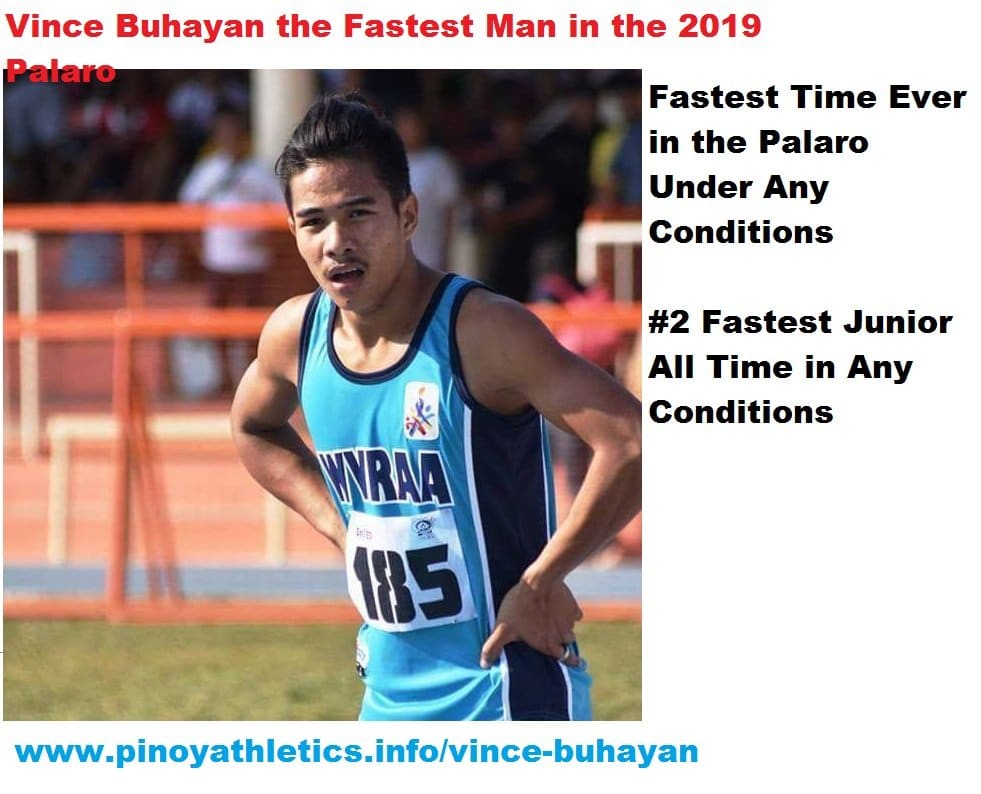 Buhayan easily won the eight-man 100 Meter event at the Iloilo City Sports Complex by .2 seconds from second place. With the Philippines National in September, Buhayan has a lot of work ahead. He had traveled 5 hours from Carles to Iloilo to join the race.

After missing out on the 100 Palaro and National Junior record due to too much wind and then claiming sole ownership of the 200m Palaro record.

Vince Buhayan and his three buddies from Western Visayas helped themselves to the National Junior Record in the 4×100.

This report falls late as I had to verify all the dates of birth for record-keeping. Vince Buhayan, Angelo Getilga, Ralph Anthony Lego, and Tristan Plotria are all verified to be born in 2001.

Making the requirements for a junior record.

The winning time of the Western Visayas high school quartet at the Palaro of 42.66. Eclipsed the RP Youth Team’s mark of 42.76 of Jason Jabol, Buhayan, Jovian Calixto, and Veruel Verdadero (3 of the 4 runners from STCAA) at the 2018 ASG.

While it broke the National Junior Record, it tied the two hand-timed records in place at the Palaro. 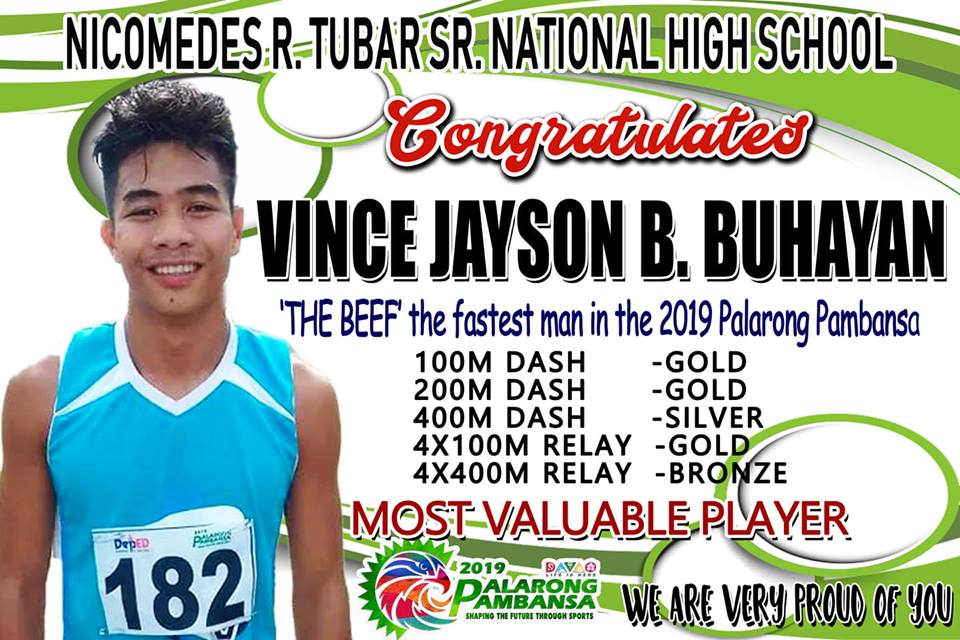 The Palaro records are summarized here and contain fixes as to what has been reported on the DEPED website.

Undoubtedly this second write-up is probably going to crash my server. We had 500 visits to our first write-up on Algin Gomez’s amazing performance in the Long Jump so far today.

Nearly 2000 visits today. It is the vibe of the Palaro that attracts large swarms to our site.

2019 Palarong Pambansa Davao City – Our next Write-up is on Vince Buhayan’s’ The Beef’, who has had a meteoric rise this year in the boy’s sprints.

Vince Buhayan, who was runner-up in the Secondary Boys 100m last year, showed he did not want to be the bridesmaid anymore.

Taking the scalp of 2x Palaro Champion Veruel Verdadero of NCR. And taking the National High school title and mantle of the fastest high schooler in the country, stopping the clock at an impressive 10.62.

Had it not been for a +2.3 m/s tailwind, it would have been well under the National Junior Record of former national athlete Daniel Noval of 10.74 set in the 2012 Thailand Open.

However, the mark is the #2 fastest time ever by a Filipino Junior in any condition only Ralph Waldy Soguilon has ever run faster as a junior with a 10.56 (no wind gauge) at the 2002 UAAP.

Due to wind assistance, the 10.75 meet record of Kasi Feberoy (CRAA) set in Legazpi City in 2016 still stands.

However, Pinoyathletics.info will still note the 10.62 on the record sheet for future reference. Although this is Vince’s last year in the Palarong Pambansa, he still has until the end of 2020 to break the National Junior Record.

The Rest of the Field

Quite an impressive Field with Veruel Verdadero, who won two Palaro titles for STCAA and then shifted to JRU. Doing his absolute best with 10.81 for a silver (PB 10.89,2017) and Alhryan Labita (PB 10.99 in heats).

Allen Delos Reyes, who took bronze at the national open, was 4th in 11.00 (PB 11.13 heats), one to watch out for, is the youngest man in the final Kian Dale Joner, who is born in 2003, Jason Jabol, the Batang Pinoy National Champion, took 6th place.

Veruel and Labita took the fastest times in Heat 4, both dead heating at 10.99. But Vince was toying with the rest of the field, running a cruisy 11.05 in the heats.

Buhayan has already represented the country at the 2018 ASEAN School Games in Malaysia.

Doing Trebles is what Vince does, and he also aims to win the 200 and 400 this Palaro.

Nicasio Valenzuela coaches Vince in Iloilo; in fact, Vince even lives with his coach. Vince has a spot reserved at Mapua University.

Although his time is wind-aided, Vince sits behind the 2015 SEA Games Champion and National Record Holder Eric Cray (10.56) and National Champion (10.61) Anfernee Lopena this year in terms of rankings.

With two slots for SEA Games, Vince would need to move into the top 2 to ensure SEA Games selection in the individual event, although he can most probably look towards a 4×100 slot.

According to the 2018 Standards for World Juniors, Vince needs to go a bit faster with a legit 10.55 to qualify for the 2020 World Juniors in Nairobi, Kenya.

Exhausted from his 100m run. Vince’s chances of a sprint treble at Palaro were ruined when he finished behind Alhryan Labita. It also surpassed his winning time at the National Open, in which he took the Gold in 22.23 in Ilagan last month.

Vince Buhayan has represented the Philippines once in 200, finishing 7th in the last ASEAN School Games. As he is in Grade 11, he will line up again for the ASG.

Vince got the better of 2x Palaro Champion Veruel Verdadero (NCR). Who were some four meters back and relinquished their title. NCAA High school Champion Tracy Soriano (STCAA) took Bronze.