Just announcing that the UAAP Board has decided rightfully, Joida Gagnao was the UAAP MVP in Women’s for her wins in the 3K Steeples, 5k, and 10k.

Pinoyathletics would like to commend Louielyn Cabuga Pamatian, who handed back the trophy to Joida for her good sportsmanship and understanding of the decision’s reversal. 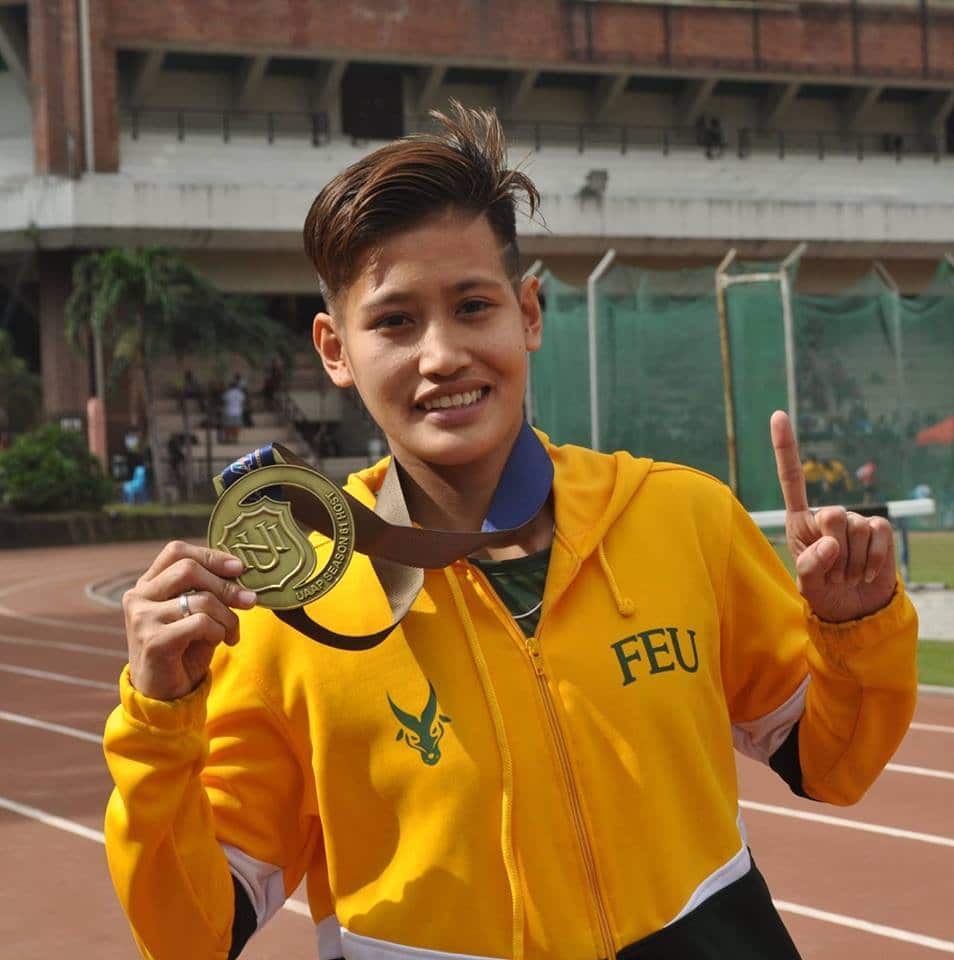 Under UAAP rules, the MVP is awarded to the athlete with the most number of individual golds, relay golds as they are considered 1/4 of a gold medal are not considered in the final tally.

Quite the performance of Day 1. Came in the throws from Aira Teodosio.

The UST student hails from Silay City, in Negros. Hurled the Hammer to a new UAAP Record of 46.12m; this absolutely demolished her previous UAAP Record of 43.23m. Adding nearly 3 meters onto her old mark.

Pinoyathletics caught up with Aira Teodosio on what is rather busy UAAP coverage.

I had selected Aira when I managed the 2014 ASEAN School Games when she was 17 years old; it was her first international meet in Marikina.

Then Aira only finished 7th in the Discus, but the experience proved worthwhile.

A Big Breakthrough thanks to Joey Ming Lao

Today was a milestone in itself, with Aira adding over 2 meters onto her best PB.

Aira mark of 46.12m ranks her around 11th or 12th in South East Asia, with Thailand’s Mingkamol Kumphol, who trains in the Czech Republic, dominating this event with 62.49m.

Kumphol was silver last SEA Games but since going to the Czech Republic improved to a consistent 60m+ thrower.

The SEA Landscape in Women’s Hammer is tough. It’s no joke. But we are happy to see Aira improve in a challenging event.

Aira follows in the footsteps of one of her role models. Loralie Amahit-Sermona.

The now-retired Sermona who best place finish was Bronze in the very tough SEA Games Women’s Hammer throw, has held the national record since 2013.

Sermona is very supportive of Aira and happy for her improvements in understanding it’s a tough event. Only Loralie is ahead of Aira on the all-time lists.

Aira’s goal now is to go over 50 meters and hopefully break the Philippine Record of 50.55m.

This is her goal by the national open in March, even though it won’t be enough to hit the Bronze at SEA Games.

It’s one small step at a time for Aira.

Please take into account Loralie was 32 when she reached her prime and broke the Philippine Record.

Part of a Legacy

Throwing is definitely seeing a bit of a resurgence.

I was thrilled also to see due to persistent nagging to the PSC on my part, our greatest ever Female Track and Field athlete Josephine Dela Vina who holds the two oldest records in the women’s and girls Discus, finally get the recognition she deserves as she was inducted into the Philippine Sports Hall of Fame recently.

It is performances like Aira’s that make the legacy started by Dela Vina proud. 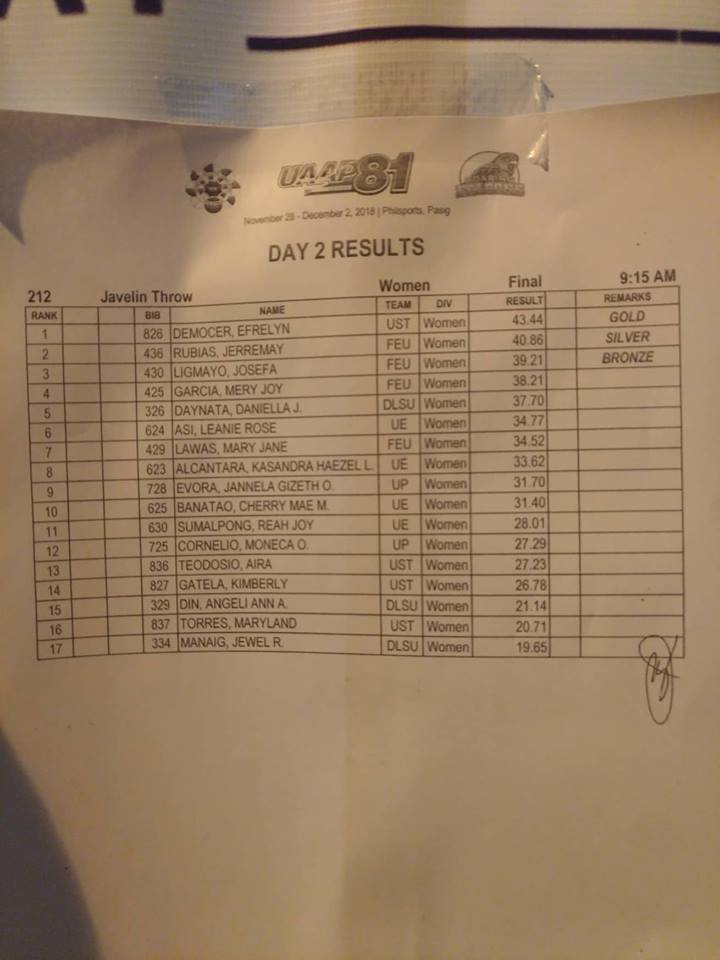 Efrelyn Democer wins national athlete Dayanaata winds up 5thPlease note no performance at this meet in the first 2 days makes the Top 10 in the SEA Rankings for any event for the year 2018.

What this indicates is the other SEA Nation countries are getting stronger. UAAP now caters to athletes up to 26 years of age.

In some cases, younger athletes are moving ahead of our college athletes.

He broke the mark of Bryan Oxales, also of UST.

It was a thrilling race with Marion Santos of UE, who crossed the line first disqualified. 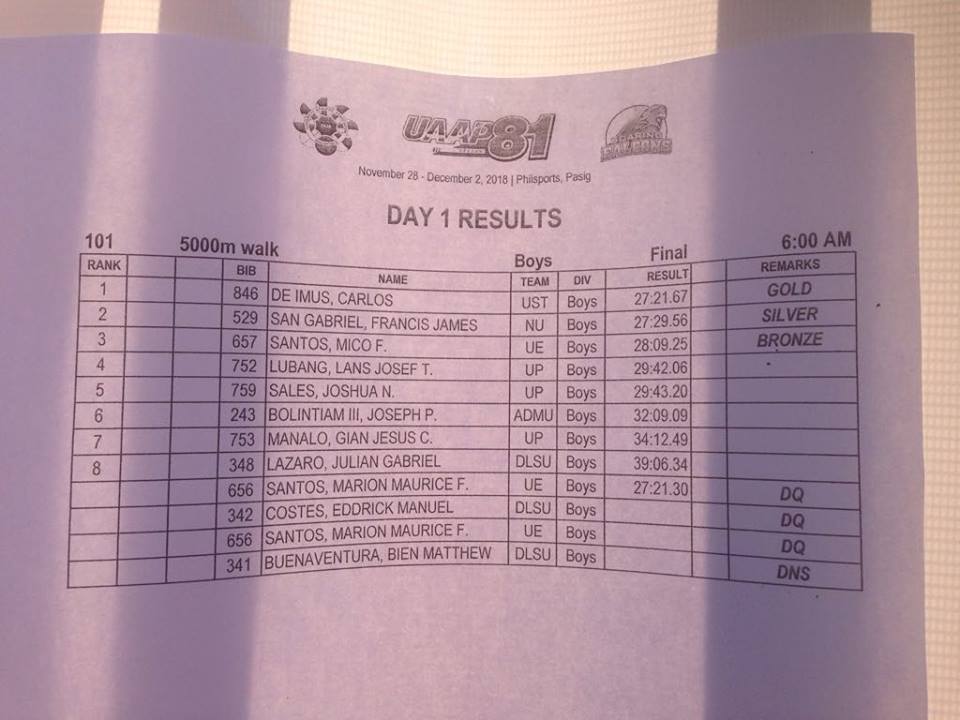 UAAP Records here *to be updated

Louielyn Pamatian (UST) wins in 2:14.86 its a season-best but still not her PB of 2:13.97  set a few years ago. It was her final year, and despite the strong challenge, she defended her title.

This performance would have only made 8th place in the ongoing Vietnam Conference Games in Hanoi, which is now.

Ideally, Lotlot should get some races in Vietnam to improve her performance in the future. 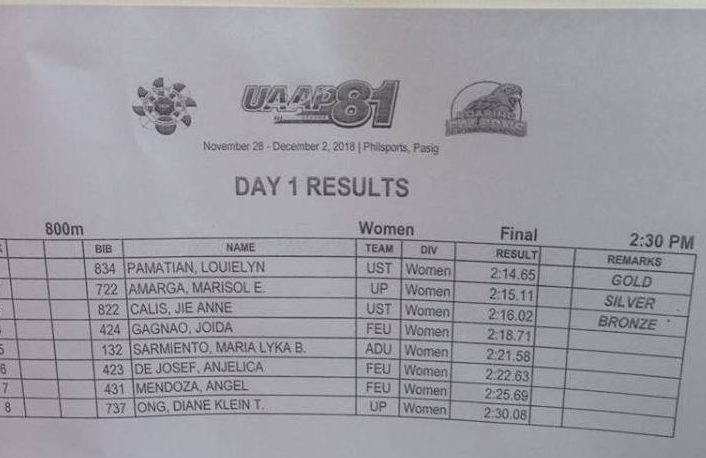 Who beat her at the National Open and Weekly Relays in their last two encounters.

Ligmayo, the UAAP Record Holder with 1.71m last season, had to fight her way out of the hospital to defend her title with a 1.70m effort.

Sefa later broke her UAAP HJ Record in the Heptathlon with a 1.72m effort.