This article is continued on the effects of the DEPED K TO 12 Implemented Program.

Furthermore, we have gathered information from various sources. Yet as we are not the official representatives of the UAAP. Pinoyathletics.info will not be held accountable and can update this information at any time.

We welcome any corrections or updates on these UAAP Residency Rules. Originally Published in 2017.

UAAP stands for University Athletics Association of the Philippines. It is a collection of 8 Colleges in the Manila Region that all participate in Sports Competitions. 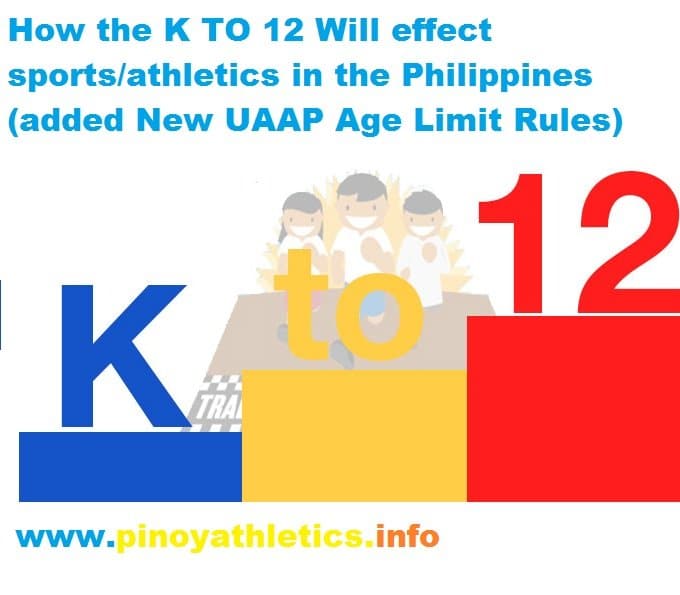 Now let’s look at how this will affect the UAAP and NCAA Philippines etc. This will have a good effect as it will mean athletes will be older in college than they have been older in high school. Which could lead to furthermore improved meet records? A lot of athletes tend to peak at 25.

And most of the time, under the older system, they were already out of college by then. And quite often struggling to find a job. Very few actually make it to the national level due to the limitation of support.

Please note that many UAAP meet records improved for Juniors, but now it’s no longer considered youth or high school level as some of the athletes were nearly 20.

For instance, this means five playing years, which will go until 23 or 24, within the maximum playing age of 24.

Furthermore, the rules also state an athlete can play until 7 years after finishing high school in different leagues.

Let’s say if an athlete doesn’t consume all playing years and has timed out of school, that would mean the maximum age would have to be adjusted from 24 to 27. 27 right? Actually wrong.

What are the current uaap residency rules from Pinoyathletics.info?

Also, if a player graduated High School from a UAAP member school and then transferred to another.

Sen. Pia Cayetano, the bill’s main proponent, said the “UAAP residency issue will now be put to rest” after the President signed the bill Wednesday.

The UAAP remains with the 1-year residency rule for college student transference from Non-UAAP e..g PRISAA to UAAP. Also, an athlete who transfers during Season 80 of UAAP will need to wait until Season 82 before they are eligible for participation in their new UAAP School.

Only first-year college students can win the Rookie of the Year Award.

Suppose Fil-Foreigner finished High School abroad because his parents are OFWs. They can play in their first year/freshman year (no residency required).

Below are Old articles of which most are no longer relevant. While the government didn’t push through laws on locals, they did change laws on Fil-Foreigners in UAAP.

We welcome any Feedback to [email protected]

Another prime example of the butchering of the country’s sports program.

The recent senates’ interference in the matters of the UAAP is not just negatively impacting the lives of individual collegiate athletes but also our sports program as a whole.

The Senate recently wanted to change the rule for UAAP athletes to a two-year residency, meaning athletes transferring schools would not be able to participate in their new school and would have two years to not eligible for UAAP competition.

Such a prolonged period away from the sport is more than likely to discourage athletes from continuing with sport or affect their future academic choices if the school they choose does not have a suitable course for a future career.

However, if a better established and prestigious league finds one year adequate, why can the UAAP? Also, I am ruling in favour of a no residency rule, which will give more rights to the athletes. However, the disadvantage of this is it could lead to rampant poaching of athletes by other schools.

Also, Senator Pia Cayetano, in an open letter, called the change in the rule against

Cayetano explained that the one-year rule of the US-NCAA is aimed at helping students acclimatize to new schools and academics.