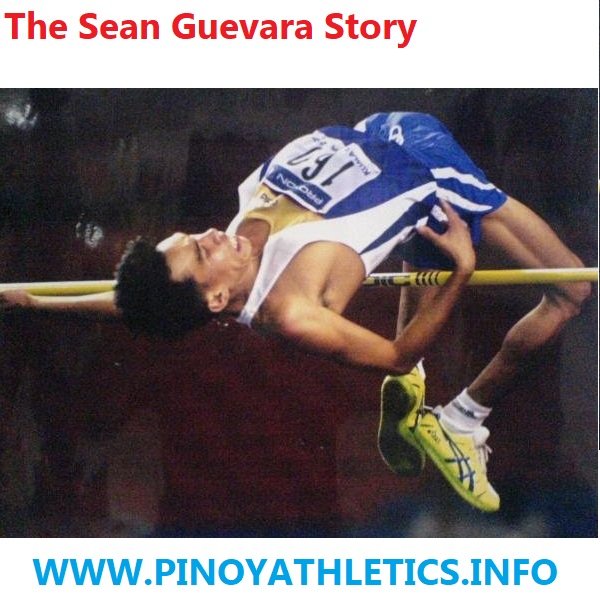 Our latest induction to the Legends of Track and Field is current national Coach Sean Guevara who hails from Iloilo in Western Visayas. Consequently discovered by veteran coach Noel Diel one of the foremost coaches of the Western Visayas.

Sean Guevara despite being already 29 years of age. And standing only 1.71m. A decade of hard work paid off for Sean.  When he broke the long-standing mark of Fil-Heritage athlete Luis Juico (2.16m). Juico had set the mark as a teenager. Juico still holds the National Junior Record which has stood 27 years since 1987.

Hip problems caused Sean Guevara to end his career as an athlete the following year. But he made the transition into a national coach. As a new coach Sean over the years matured into the responsibilities that were given and the pressures that came with it.

Sean  Guevara coached Joebert ‘Grover’ Delicano in 2007 SEA Games to bronze in the triple jump. Delicano leaped 16.06m. Hence breaking the national record and becoming the first Filipino to jump over 16m. Two years later Delicano would retain the bronze medal and then reset the national record again with a 16.12m leap.

Leading Benigno Marayag to a Bronze in 2011 SEA Games. Combined with his good friend, former SEA Games teammate, and Illongo neighbor Ernie Candelario he helped coach the Mapua Boys team to a Junior 4x400m Relay record at the 2013 PNG.

Sean then took on the very tough task of guiding Jesson ‘The Panda’ Ramil Cid who had trained under Veteran Coaches Rosito Andaya, Jojo Posadas, and Dario De Rosas. Sean accepted the challenge despite the amount of pressure placed upon him. He was able to improve the 22-year-old Cid to 7038 points a Philippine Record. More importantly, they retain the SEA Games gold medal in decathlon which was the last won in 2001. Cid would get the Silver medal in 2015 in Singapore relinquishing his Decathlon title.

Sean then worked with Aries ‘Rondo’ Toledo who was an SCUAA champion in several events. Sean converted Toledo into a Pole Vaulter. Toledo first broke Cid’s Decathlon record with 7129 points at the Thailand Open. At the SEA Games Toledo shattered this mark with 7433 points and was the surprise winner defeating the Asian Champion Sutthisak Singkon of Thailand.

Until now the SEA Games have never won a High Jump gold in Track and Field in the history of the event in Men’s or Women’s. Perhaps one day

Coach Sean hopes to help guide the one who ends this drought. Below is an interview conducted with Coach Sean.

Sean Guevara What first got you into the high jump, did you play any other sports or events before?

I started my track and field quest when I was in 2nd year high. I was discovered by my high school coach Mr. Noel Diel as a long-distance runner reaching only until the provincial meet. On my 3rd year high I won the 3,000 meters steeplechase that made me qualified to play the regional meet. Until on my 4th year high that I explore other events from hurdles, Javelin throw, triple jump, long jump, High Jump, and Pole Vault.

I won the pole vault and got second place at a high jump during the regional meet. Selected to compete at the Palarong Pambansa 1993 at Ilagan, Isabela. My event quest continues during my college time. I also tried to compete at decathlon once at the CHED regional meet. I did not continue to train for the event because of my ectomorph body type.

Which individuals do you attribute to your success as a high jumper?

My success will never be possible w/o the following individuals. First, to coach Noel Diel my high school coach who discover me. Then my college coach Mr. Ceceron Ceballos who enhance my skills. Also to the coaches of the national team that shares their knowledge namely Coach Alex Ligtas, Coach Dario De Rosas and likewise Coach Joseph Sy, Most of all to our Athletic Director Mam Mencie Pador of my beloved Western Institute of Technology Iloilo City who taught me the wisdom of life. Thank you so much. Opportunity made me decide and my performance endorse me to the National Team.

My most memorable moment was when a broke the National High Jump record in 2005 national open. It was my major goal during my time as a national athlete.  I believe that being one of those will take part in the history of Philippine Track and Field.

Yes, I am. It’s maybe because I am never going to rigid training during my college time. My priority was to finish first my Engineering course and take the board examination.

Maybe yes. But if I have the power to rewind the time. I will still take the road where I been.

In the year 2006, a year after I broke the national record in high jump I got injured on my right hips. That limited my explosive drive knee when I jump. That was the time that I have no choice but to stop jumping. That was also the year that some of the national coaches depart the country for coaching abroad. Maybe it is my destiny or God’s will for a sudden transfer of my career from an athlete to coaching.

Well, I usually focus on my athlete’s development through the achievement of their athletic potential. Decathlon is one of the events that I was challenged with and I want to develop more including the heptathlon but I will never set aside the jumping events.