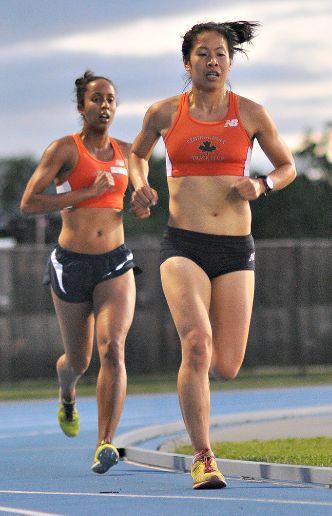 In Women’s 4×100, the only southeast Asian Team to take part was Thailand. Thailand ran 44.24, slower than their 43.99 5th place finish they secured at Asian Champs. Thai women finished 12th in the world of 24 teams.

Thailand was the silver medaLlist at the 2017 SEA Games with  44.62. SEA Games Champion Vietnam (43.88) failed to put a team together. Thailand has come along way since hiring American coach Loren Seagrave, who previously was responsible for Vietnam’s rapid progress. The quartet was composed of Tasaporn Wanakit, Chattha, Pakdee, and Thipat and finished 3rd in Heat 1.

2017 SEA Games Bronze medalist Philippines (44.81) also failed to qualify with not enough outings together. The team of Zion Corrales-Nelson, Kristina Knott, Kayla Richardson, and Kyla Richardson clocked 45.72, which wasn’t quite enough to make the standard for the world relays in Yokohama.

Japan finished behind  Thailand with 44.95 at Asian Champs. Clocked the same time here as Thai’s with 44.24. Meanwhile, China, who won the Asian Champs, was disqualified. Kazakhstan, who took silver at Asian Champs with 43.37, clocked 43.71.  Bahrain, the bronze medalList at Asian Champs, did not participate.

The USA took the world lead with a 42.51 clocking to win the first heat. Recently crowned Asian Champions Thailand Men’s 4×100 finished 13th in the world of 24 teams with a time of 38.82. The mark was outside the Thai’s southeast Asian record and gold medal time at Doha, Qatar last month 38.72.

In a depleted Asian Championships, the final were Japan, India, Sri Lanka, Bahrain. Malaysia didn’t join. Thailand was given the win after finishing behind China, which was disqualified.

China, however, on this occasion, progressed to the final with a 38.51 timing. Thailand finished 6th in heat 1.  Japan was disqualified here. Indonesia clocked a season’s best of 39.29, improving on their time of 39.94 at Asian Champs.

But still yet to yield a full-strength team despite adding Zohri this time around but resting there next best 3 runners. They came 7th in Heat 1. Indonesia finished 17th, but 5 teams it beat were disqualified.

Olympic Marathoner. Jane Vongvorochoti of Thailand clocked 2:48.36 in the Seville Marathon on 17th February in Spain. Tabby Jane is the training partner of Mary Joy Tabal.

Meenapra 21.08 was in the semifinals, he ran 21.20 to win narrowly over his teammate 19-year-old Siriphol Punpa who timed 21.25 (PB 21.18), well back in third was Nattaphong Weerawattanaratiri in 21.62. Meenapra was the silver medalist at the SEA Games last year behind Trenten Beram of the Philippines.

Meenapra didn’t race in the 100, but there were good results included SEA Games bronze medallist Kritsada Namsuwan who won in a hairline finish of 10.46, ahead of Punpa 10.47 and Nattaphong 10.49.

Jirayu Pleenram won the 400 in 47.37, narrowly holding off Kongkraphan, who had timed 46.74 to win the Thai National Games near the end of last year. Suthonthuam, the SEA Games silver medallist, took bronze here.

In the Hurdles, Anousane Xaysa, who studies in Thailand, won 14.26, over Apisit 14.34, and Jamrat Rittidet 14.38, a former 3x SEA Games champion. Kittipong Boonmawan opened his season with 63.13m in the Hammer.

Thailand Levels up its Athletics Program It has been reported that American Coach Loren Seagrave is now the Coaching Consultant for Thailand. On his Instagram, Seagrave was pictured enjoying a Durian in Thammasat University, the Athletic center of Thailand. Seagrave is best known for his stint upgrading the coaches in Vietnam. He was directly or indirectly responsible for Vietnam’s rise from 6 golds to 17 golds in athletics between the 2013 and 2017 SEA Games. With 13 golds from Women’s athletics. He transformed the program of Vietnam into not just a Southeast Asian but an Asian powerhouse. With his wards going on win Asian titles.

Seagrave, who was with IMG, had huge success with several Olympic champions, having worked with Gwen Torrence, Dwight Philips, and Justin Gatlin, among many others.

Unlike in Vietnam, he flew in and flew out to teach coaches or have athletes train with him at IMG. Its rumored Seagrave will be staying and coaching athletes and coaches in leveling up Thailand’s program for the 2019 SEA Games. Thailand, which has traditionally always been a strong contender at SEA Level with Seagraves’s vast knowledge, will surely be a force for the SEA Games in December.

Southeast Asian Nations have been leveling up their programs. Malaysia sending 2 sprinters Husniah Zulkifili (PB 11.58) and Jonathan Nyepa (PB 10.28), to Dwight Philips in Atlanta to qualify for the Olympic games, and Indonesia tapping the services of Harry Mara. And consequently, they produced a world junior champion and several medals at Asian Games, including an 8.09m SEA Record jump by Sapaturrahman.

Meanwhile, Thailand seems to have sent all its sprinters to train in Miami, Florida. For preparation for the Asian Champs in Doha, Qatar, April 23-28.

Siripol Punpa takes gold at the Balkan Cup and, in the process, takes the SEA lead in the 200m. Erzurum, Tukey

Thai Sprinter Siripol Punpa has taken the 2019  Lead for South East Asia in the Men’s 200 Meters. The exciting young star from Surat Thani is still 19 years old, born in September 1999.

The Mark of Punpa pushes him ahead of Malaysian-Australian Russel Taib (20.77), who held the Season Lead since 23 March 2019.

Punpa mark also puts him under the 2017 Gold Medal Medal Winning Time (20.84) of Trenten Beram of the Philippines.

“don’t let go of the discouragement that ever comes to steal the dream from the heart” ????

“a thousand” Siri raft, the Thai star from surat thani continues to develop the most recent self-development. The old record is 200 meters. In your life, you can get down with 20.76 seconds of training in Poland, and this is a better record than those who took the 200 m gold medal. The latest game from the Philippines that made 20.84 seconds.

As well as competing in the 100m, the Men’s Team also clocked 38.92 to win the Men’s 4×100. Featuring Ruttanapon, Bandit, Meenapra, and Siripol Punpa.