ZHAOQING, China — Su Bingtian continued his impressive run of form this season after clocking a superb 9.98 seconds to win the men’s 100 meters at a district meeting Zhaoqing on Saturday. It was the first time Su was breaking 10-seconds since the fruit 2018 season in which he won a silver medal in the 60m at the World Indoor Championships.

To see a list of athletes qualified for the Olympics.

Bingtian of China reacts after winning second place in the men’s 100m final during the IAAF Diamond League Shanghai 2018 in Shanghai, China, 12 May 2018. [Photo: IC]

Bingtian is the fastest Chinese Man of All Time in the 100m Dash; he holds the National Record at 9.91.
;

It is important to note that Randy found that White and Asian sprinters have less natural muscle tension, which is evident in Black Sprinters. So focussed on starting with that. 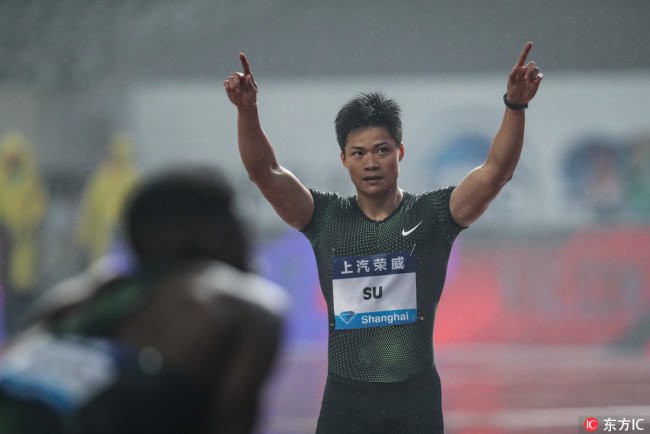 Bingtian Su has tied the Asian Record of 9.91, set twice by Femi Ogunode of Qatar.

Bingtian Su holds the Asian record for 60m and 100 yards. And reset the national record of Xie Zhenye set in France 3 days ago at Meeting De Montreiul, where he ran 9.97.

However, the 28-Year-old Bingtian Su took .08 off his personal best at the IAAF World Challenge in Madrid last Friday.

Therefore this means now two Chinese sprinters have breached the 10-second barrier. While Ogunode runs for Qatar, he is from Nigeria.

Italy’s Filippo Tortu bagged the silver with 9.99 seconds, while the third place went to South African sprinter Akani Simbine at 10.01. Tortu also set an Italian National Record; his time breaks the 1979 mark of the late great Pietro Mennea, the 1972 Olympic Champion and former world record holder in the 200 Meter Dash. 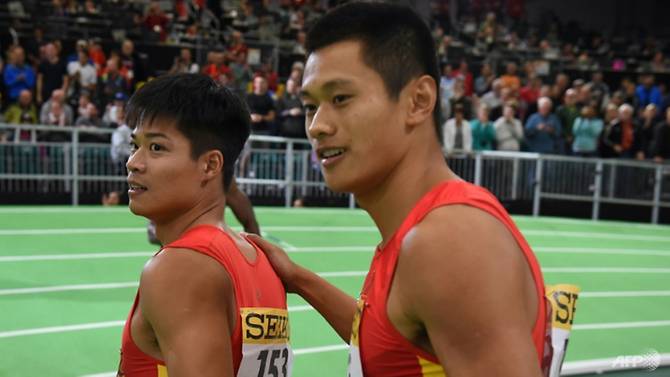 China’s Su Bingtian, the Co-Record Holder of Asia, leads the Men’s 100m at the Asian Games in Jakarta. Bingtian has a personal best of 9.91.

The 28-year-old is a medalist at the World Indoor level and holds the Asian record in the 60m.

Bingtian Su shares the Asian Record with Femi Ogunode, a Nigerian who represents Qatar. Su is within range of the Ogunode Asian Games Record of 9.93 sets in 2014.

Femi will not be competing here, but his younger Tosin will be Tosin. However, he is not ranked in the Top 10 in Asia this year but has a PB of 10.18 from 2016.

And as a testament to how China has taken over Qatar and Japan as the Men’s sprint power in Asia in the short sprints.

Another Chinese sprinter Xie Zhenye heads the 200m Rankings and is second in the 100 with a sharp 9.97.

“Our progress lets more people know that we Chinese can do it in sprinting and lets many athletes in China feel confident and get strength,”

Hot on their tail is veteran sprinter Barakat Al-Harthi, 30, who has been within the fringe of top sprinters in Asia for over a decade.

Barakat of Oman recently went under the 10-second barrier and is tied with Xie at 9.97.

Al-Harthi was the bronze medalist at the 2013 Asian Champs.

21-Year-old Abdullah of Saudi Arabia recently won a Diamond League meet in 10.02, at the expense of Hassan Taftian of Iran 10.03, both men clocking National Records.

Taftian a big scalp as he was the Asian Champion in India in 2017.

While the Japanese Duo of Ryota Yamagata one of the fastest Japanese men ever with 10.00 last year; he is the 2013 World University Games silver medalist.

Kiryu the World Junior bronze medalist in 2014 at Eugene, Oregon.

And he is ranked 9th surely. With these more experienced athletes in the field, he will be out of the medals.

But maybe age is on his side vs. the experience to land a place in the final 8.

Another Underdog won the 2nd circuit of the Diamond League Shanghai. Bingtian Su took a win in front of his home crowd.

Su blasted out and left everyone behind at the start. Rodgers had to work extra hard but ran out of track to catch Bingtian Su.

While the 27-year-old  Bingtian Su is the first Asian of Asian origin to clock below 10 seconds, which he achieved at Hayward Field 2 years ago with a 9.99 (+1.5) run.

Also, the ageless Kim Collins was here and ran 10.30 for 6th place.

How Tall is Su Bingtian?