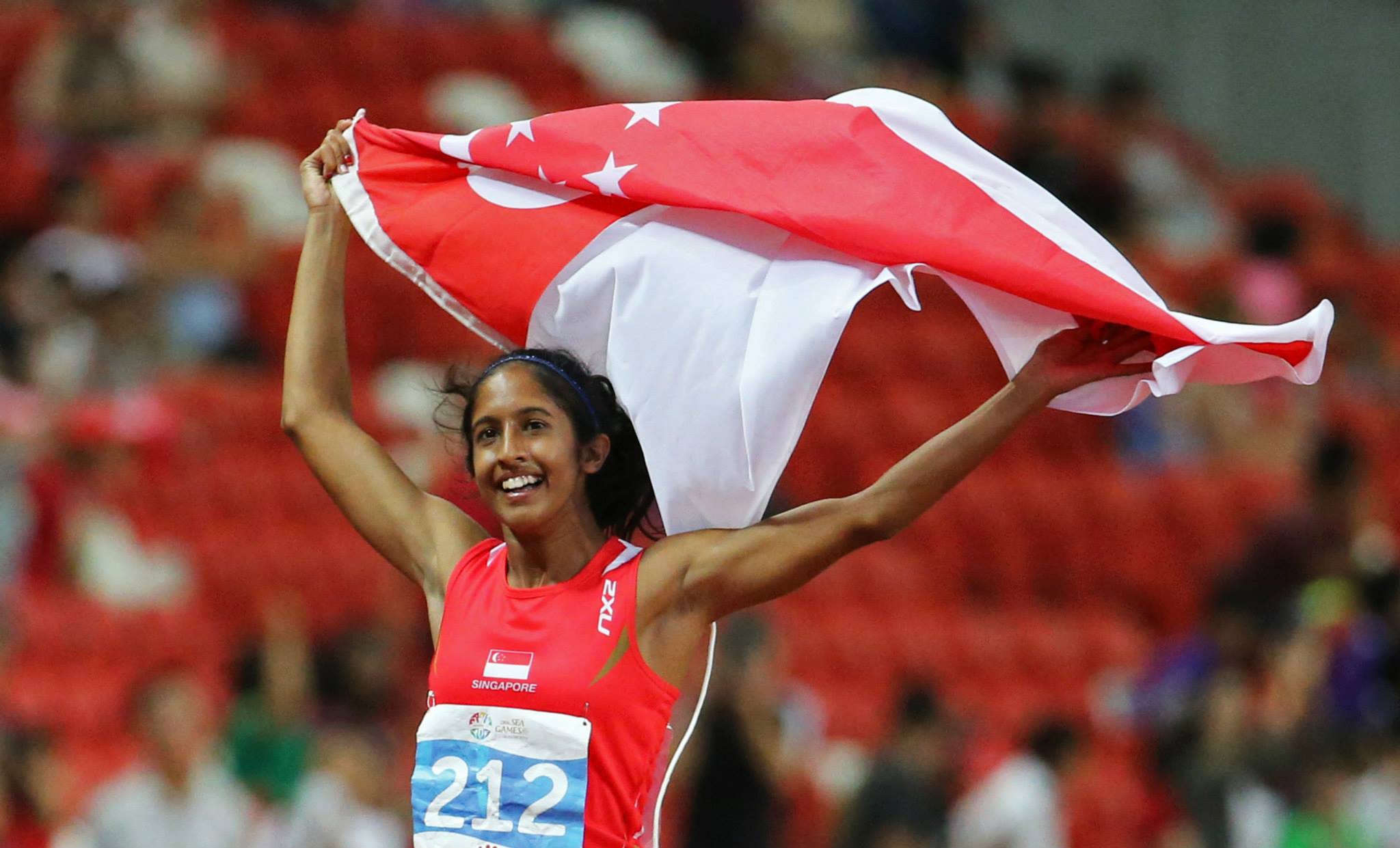 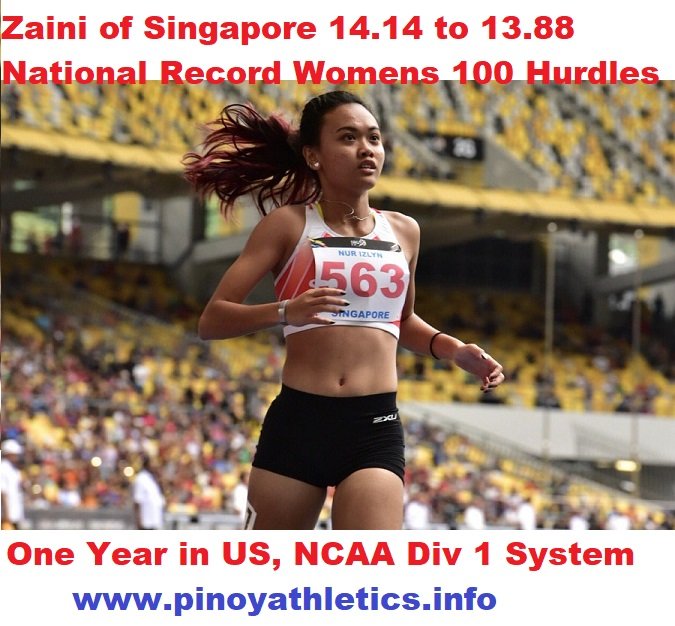 Singaporean Sprinter Nur Izlyn Zaini, 21. Claimed sole ownership of the National Record in the women’s 100 Hurdles. With a time of 13.88  (+1.7) at the 2019 Sun Belt Outdoor Champs in Jonesbro, Arkansas, on the weekend.

The Performance catapults Zaini from 5th to 2nd in the SEA Rankings for 2019, only behind Emilia Nova of Indonesia 13.70. Nova has run a 13.59 with no wind reading as well. Zaini took bronze at the 2017 SEA Games with a then-national record of 14.14. Nova took silver in the Heptathlon but now is focusing more on the 100 Hurdles individual event.

Improvement in the US NCAA Div 1 System

The Bottom line is the other SEA Nations like Singapore are sending their athletes to US Colleges. And the results are very evident, as presented in the case of Zaini, who has been at Georgia Southern for one year.

Such opportunities to study and compete in the US Div 1 system seem to improve the athletes rather than just staying and training at home. Another athlete who benefited a lot was Soh Rui Yong of Singapore, who became a 2x SEA Games Champion in the Men’s Marathon after schooling in Oregon.

A prerequisite for athletes accepted into US Colleges on scholarships is the SAT Test. In the Philippines, it can be taken at the 13 following locations.

The Opportunity of studying in the United States provides a level of coaching, facilities, and competitions. That Filipino athletes will get nowhere near in the UAAP leagues. Therefore, with its partnership with the US Sports Academy, the PSC should really be pushing for athletes in all sports to study in America. Like what many other countries are already doing.

Serena Teoh set a New Singapore Half Marathon record in Spain with 1h22.07, breaking the national mark of Mok Ying Rong 1h23.14 set in 2016. Teoh works as a risk analyst in Basil, Switzerland. The qualifying time for the SEA Games women’s marathon in December is 2:58:17, pegged to the previous edition’s bronze-medal time. Teoh hopes to clock around 2:55 in Tokyo in a few months.

Due to time constraints, I ran out of time to post a full analysis of Day 2. Due to a lot of competitions coming up and other commitments. Later on, we will post a summary of Philippine Results in a table.

The article on Jomar Udtohan 46.95 is here

Francis Medina ran a Season’s Best of 51.52, improving his 53, and 52-second clockings at the Hong Kong Summer meet and Philippine Nationals. For a well-deserved silver. But in good company behind Keisuke Nozawa, an Olympic Semi-Finalist in this event at the 2016 Rio Olympics alongside Eric Cray.

Kristina Knott of the Philippines was a Finalist at the Asian Games in the 200. Narrowly held onto a win over 2015 SEA Games Champion Shanti Veronica Pereira of Singapore 23.79 to 23.85.

Rayzam Shah Sofian, the SEA Games Champion, improved his season’s best from 14.12 at Ilagan to 13.89 in heats and then again to 13.82 in finals. To place 3rd behind two Hong Kong athletes that both broke the meet record.

SEA Games bronze medalist, Clinton Bautista of the Philippines, finished 5th in a season-best of 14.18 #2 SEA athlete. Clintons PB is 14.14 from last year in Taipei. He ran 14.22 at the national open in Ilagan. A good run from Alvin Vergel broke his PB 14.64 in heats to 14.56 and then repeated that in the finals.

Joining Carter Lily, who ran it at the Phi Nationals on the SEA Games squad. Presumably, this means as two have now qualified, the qualification mark moves from 1.51.70 to 1.51.63. With Carter already having timed 1.49.17 this year.

Evalyn Palabrica broke her Personal best set 5 years ago in 48.25m at the 2014 UAAP Palabrica threw the Javelin 48.34m and finished 5th. But Evalyn showed she is well on track for SEA Games, sitting in 4th SEA Rankings. But behind 3 Thai’s of only 2 will get to compete at SEA Games. Palabrica took the bronze medal last SEA Games. Nachan of Thailand, the SEA Games Champion in her first competition of 2019, took the gold.

Albert Mantua of the Philippiwho threw his PB of 46.94m at the National Open who was the season lea until today in the Men’s Discus. I finished with a bronze.  Binh improved his PB from 47.31m at the National Games last year in Vietnam.  Mantua safely made it over the 44.80m qualifier for SEA Games yet again.

Philippines Entries in order of Appearance 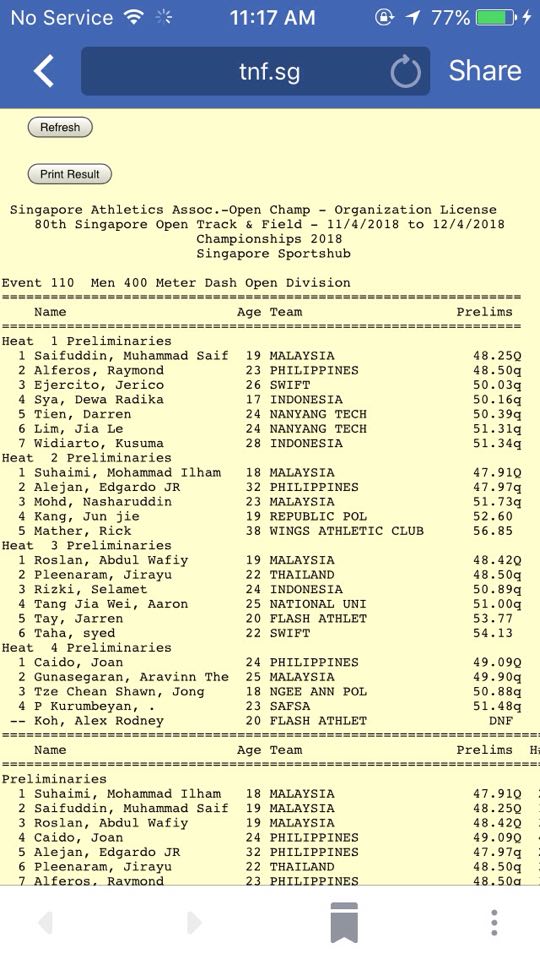 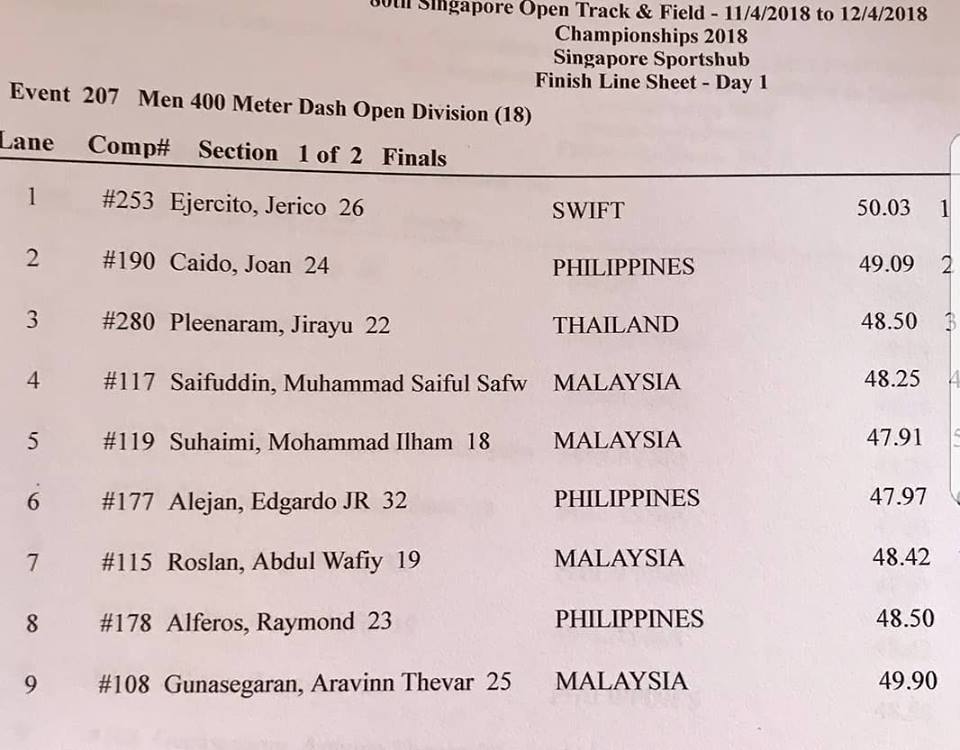 A Final. 4 Filipinos, 4 Malaysians, and a Thai.

4 Months into 2018. Philippine Track and Field send 23 athletes to the Singapore Open.

Among the entries include the 2011 SEA Games Champion Heru Astriyanto of Indonesia. While the Philippines has only one entry, Malaysia has entered six athletes in the 3 Heats of the 400. Indonesia has enteredWithouthout its fastest, Singapore is man Percy Zubin Muncherji, who is on a college scholarship in Indiana, United States.

Alejan will join with Bagsit, Del Prado, and Alferos. With Alferos and Alejan replacing Mico and Bigyan from the last outing. In the Pre-Asian Games, the Philippines clocked 3:13.84 in the 4×400. The Philippines will be up against Malaysia and Indonesia.

EverGreen Marestella Torres, the SEA Games Bronze Medalist who is now 37 years old, will mainly be challenged by Parinya of Thailand, a 6.30 jumper.

Zulueta and Janario will compete for the Philippines in a straight final. With 2015 SEA Games Champion Shanti Pereira (24.61 this year). Janario is the 2016 SEA Youth Champion.

Luzon, Malonzo, Zulueta, and Janario will team up in the 4×100. Looking to improve on the 47.91 they posted at the Time Trial in March. Singapore, Indonesia, and Japan will also participate.

Again, many Malaysian men will be competing in the 100m, although most of them are at the Commonwealth Games in the 4×100. Malaysia sends their best juniors. Ismail, 19, heads Heat 1 with 10.46. Hanafi, 19 Heat 2 with 10.47. Saadon leads Heat 3 with 10.53, while National Champion Lopena of the Philippines 10.60 will also start. Lopena finished 2nd at the Singapore Open last year.

Heat 4 features Jomar Udtohan, who recently ran a PB of 10.56 at the Pre-Asian Games. Heat 5 has Calvin Kang 4th in the 2015 SEA Games from Singapore. While Dipna Lim clocked 59.55 and met the 59.78 qualifying standard for Singapore to go to the Asian Games.

Dipna, who is the SEA Games silver medalist in this event, the last 2 SEA Games. Clocked her time in Perth, Australia, at the Strive C Meet.

The relays both missed out on Commonwealth Games qualification. Meanwhile, at Gladstein studying at Indiana University,

Any Other Results of Filipino athletes Local or International, please email

[email protected], we would love to hear from you. 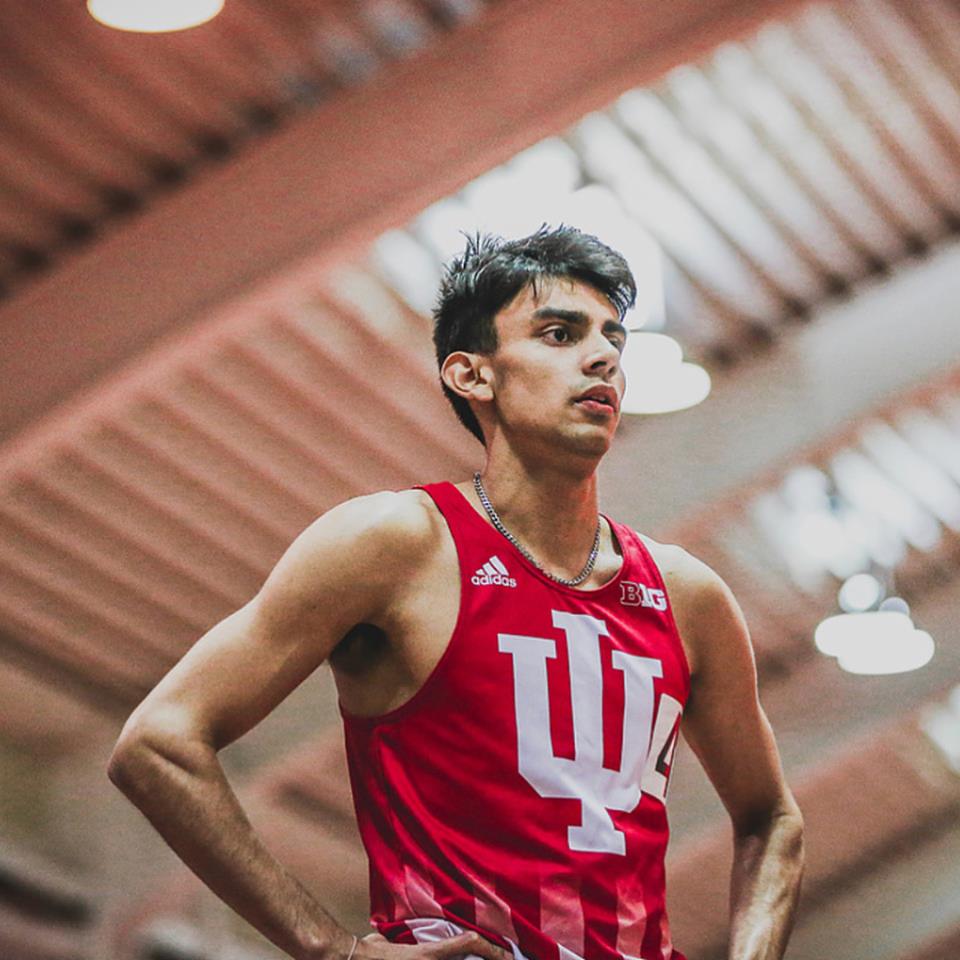 Singapore’s 400m Record Holder Percy Zubin Muncherji is now studying at Indiana University. At the same time, opening up his seasons with quite a few impressive runs. And Mukherji, who ran indoors for the first time, shattered the National Indoor Records.

All runs were recorded at Bloomington, Indiana. 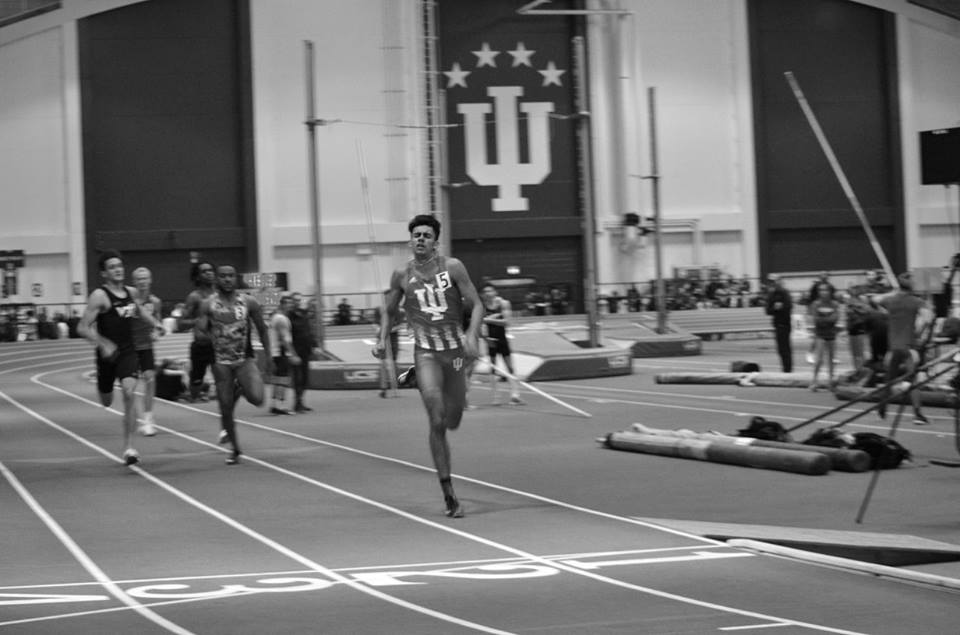 He did not participate in the 2017 SEA Games due to military service. But was 5th at 2014 Asian Juniors.

Rankings will be published at the end of the month.