One of only Two Bronze Olympic Medals ever won in Athletics for the Philippine Islands was by Simeon Toribio in the Men’s High Jump.

Pinoyathletics has decided to expand on the original article by Joboy Quintos.

A New Life for the Toribio Family in Bohol

Simeon  Toribio was born August 6, 1905, in Loboc, Bohol. He was frail and spare-framed. His playmates call him tukon (stick to local dialect) because he was a beanpole, tall for his age.

He was a newcomer in town, his parents having come from Zamboanga. His father, Luis Toribio, a leader of the Revolutionary Forces, who later became a court clerk, moved the family to Bohol after losing a bitter election protest.

Sports are better than cutting the Grass.

Simeon Toribio wasn’t particularly interested in sports as a youngster until one day. Then, while assigned to cut the Grass in the schoolyard, the school coach announced that those who train in athletics would be exempted from trimming the lawn.

And since manicuring the lawn was, in those days, a form of punishment for errant acts of school pupils.

Upon graduation from high school, Simeon Toribio enrolled at Siliman University in Dumaguete, Negros Oriental, for a bachelor’s degree in science while working at the University’s furniture shop to earn his board, lodging, and pocket money.

Simeon Toribio also found time to improve on his expertise in the high jump under expert coaching.

By 1926 he was the best High Jumper in the country with a leap of 1.85m breaking the national record of Eliseo Razo 1.83m. Simeon Toribio had set to win the 1925 edition of the Far East Asian Games in Manila. 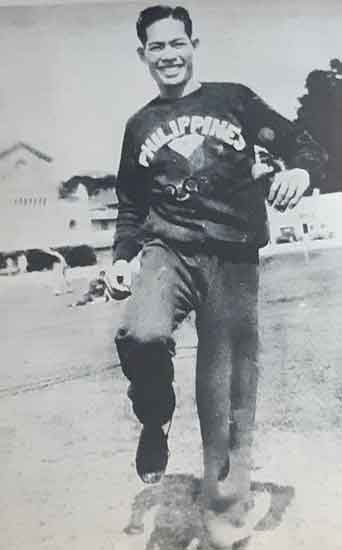 At age 22, Simeon Toribio made the national team to the 8th Far Eastern Games (now Asian Games) held in 1927 in Shanghai, which started the long domination of his favorite event that earned him a berth in the 9th Olympic Games in Amsterdam.
He won the Asian High Jump title there with a leap of 1.93m setting a games record.

In his first Olympic appearance, his teammates were great swimmer Teofilo Yldefonso, who won the country’s first medal in the quadrennial conclave, a bronze, another pool shark Tuburan Tamse and sprinter Anselmo Gonzaga.

Simeon Toribio made it to the finals and ended up fourth, having the distinction and satisfaction of beating the world and Olympic champion Harold Osborne. He missed the bronze on a jump-off where 2nd to 5th all equaled 1.91m.

Simeon Toribio leaped 1.91m at the Olympic Games. At another meeting earlier in the year, he improved his National Record with a 1.95m leap. 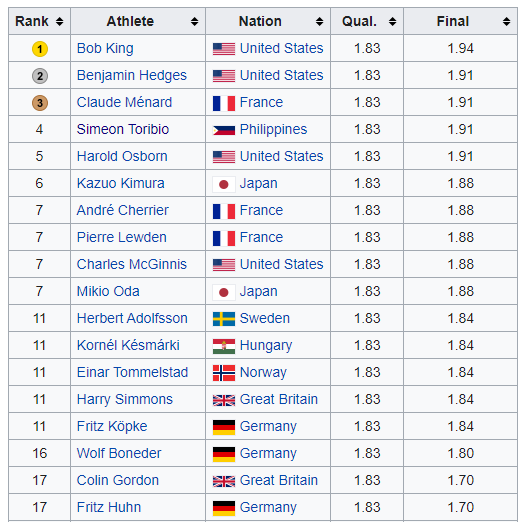 He again reigned supreme in the high jump in the 9th FEG in 1930 and the 10th and final edition in 1934 when he set an all-time Asian record of 1.931-meter. For annexing his third FEG victory, he was awarded permanent possession of the Games high jump trophy.

1932 His Greatest Ever Moment and Olympic Bronze

In 1932, before carrying the country’s flag anew in the Xth Olympiad’s Los Angeles Games, he married a comely lass named Maximiana Escobar.
He reached the pinnacle of his career in Los Angeles, where he sailed over 1.97m to win bronze. The 1932 Summer Olympics was the Philippines’ most successful foray into the World’s Greatest Show, with three bronze medals.
Teofilo Yldefonso snared his second Olympic third-place finish in as many attempts, while boxer Jose Villanueva grabbed the bronze medal in the bantamweight division.

According to Afable, the high jump competition in Los Angeles was a long-drawn battle, taking four hours. With the top four jumpers all tied with clearances of 1.97m, the organizers held another jump-off to determine the placings.[7]

The organizers awarded the gold to Canada’s Daniel McNaughton, who had a first-time clearance over 1.97m, [9] while Bob Van Osdel of the United States took the silver.

According to author Jorge Afable

Toribio could have won the gold medal if not only for the “call of nature.” It was a grueling four-hour competition to jump over the bar raised at six feet and six inches high.

Toribio, who once made the jump, failed to overcome it the second time because he was distressed by a call of nature.

Perhaps because of discomfort, the then 26-year-old Toribio took three attempts[11] to negotiate 1.94m and 1.97m – heights well within his capabilities.

A helpful Japanese coach lent a blanket for Toribio to cover himself in as he relieved his bladder!

He improved his fourth-place wind-up four years back to bring home this time the bronze along with Teofilo Yldefonso’s and fighter Jose Villanueva.

That’s spelled out for the country’s most satisfactory showing in the quadrennial aggrupation that has never been matched since.

After the LA Games, Toribio strayed behind and enrolled at the University of Southern California, where he earned his degree in Bachelor of Science in Civil Engineering.
.

Loboc’s pride made it again to the 1936 Berlin Olympics, his third, becoming the only Filipino athlete to serve the country in three Olympics and as many times in the FEG that earned for him the coveted Helms World Trophy for being Asia’s most outstanding athlete in 1930.

Unfortunately, he could not mimic his bronze medal effort in 1932 and wound up 12th in the 1936 Olympics. 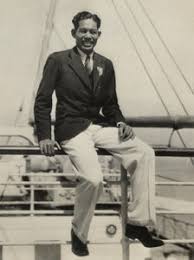 Toribio’s name is engraved on the Olympic Tableau de Honneur. He was, too, included in the 1928 World Biography, published in New York.

In 1930, he was accorded the Zizi Shimpo Medal of Honor and voted unanimously as the Filipino Field Athlete of Half Century by the Philippine Sportswriters Association.

Following his retirement from active competitions, Toribio served actively in several positions at the Philippine Amateur Athletic Federation, its sports ruling body, including its vice president from 1955 to 1959.

During the Japanese occupation, he was active in an underground movement as First Lieutenant in Lieutenant Colonel Edwin Price Ramsey’s guerrillas operating in Bulacan and Central Luzon.

Reason for him and his brother Narciso to be arrested and sent to the garrison where they were saved by a Japanese soldier, who saw a framed scroll of him presented by the Japanese Emperor during the 1930 FEG Tokyo.

Toribio was not only an outstanding athlete; he was also a top-notch lawmaker and civil engineer. He served as congressman of Bohol’s Second Congressional district from 1946 to 1953. Consistently voted one of the ten outstanding congressmen by men and women covering the Lower House during his term.

Toribio, likewise, received numerous awards from the engineering world. He was elected to the CHI Epsilon (US National Civil engineers) and was a member of the Philippine and American Society of Civil Engineers.