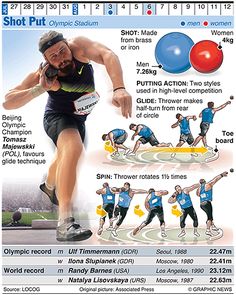 How can I become very good at shot put?

. After the shot is placed in the crook of the neck, the thrower rotates the upper body and feet back while bending at the knees and then rotating back while exploding upwards. Olympic lifting styles can help with speed and strength, especially the snatch.