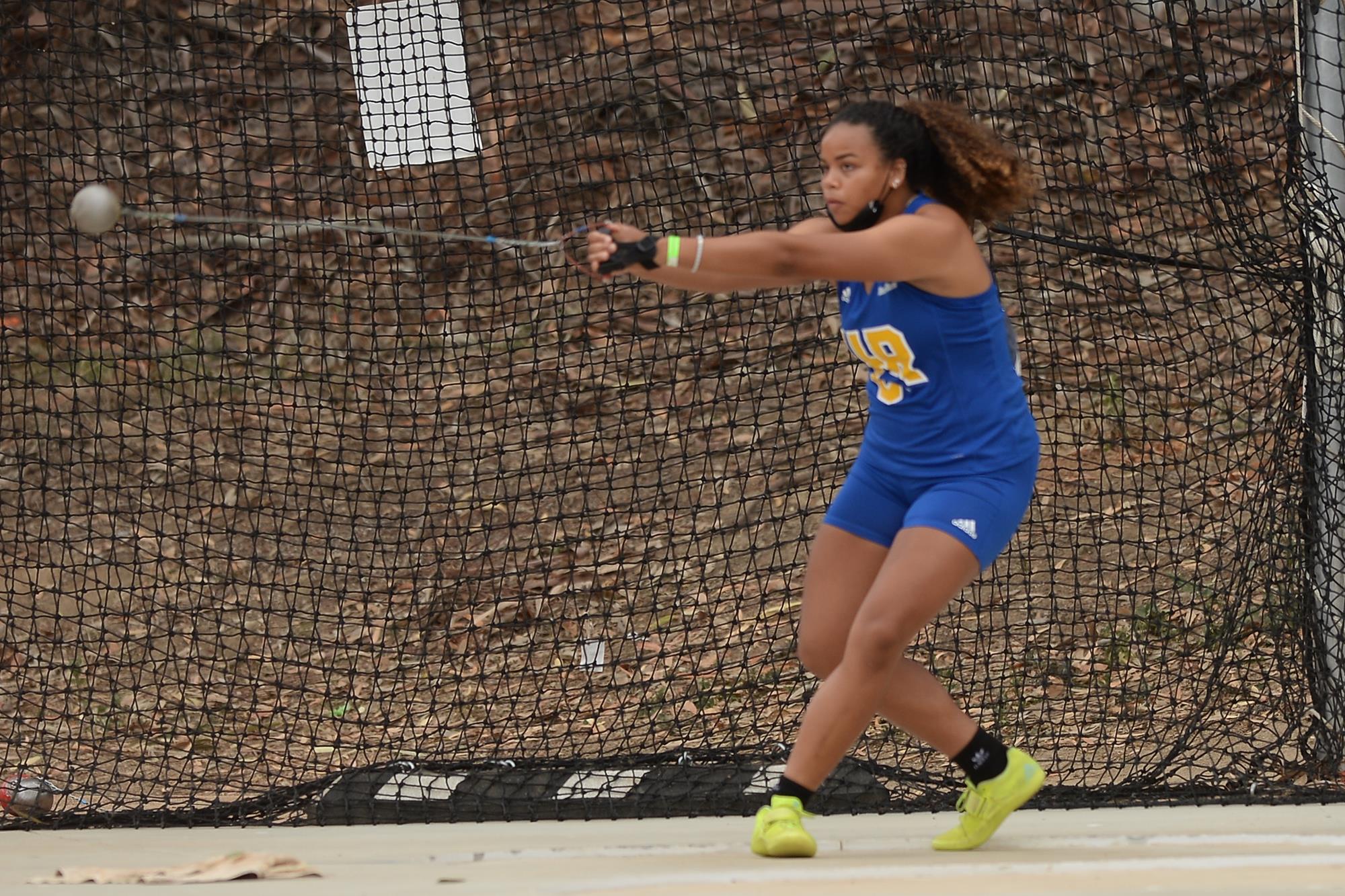 One of the oldest records in Philippines Athletics came tumbling down. Shiloh Corrales-Nelson holds the Philippine Record in the Womens Hammer Throw. She hurled the Shotput a staggering 13.97m at the Ronn Mann Classic on Feb 3 at Flagstaff Arizona.

The 5’9 21-year-old Shiloh is the younger sister of Zion Corrales-Nelson the former national record holder in the 200m and 400m.

Shiloh is at the University of Riverside, the same college that SEA Games Hammer Throw record holder Caleb ‘The Man Mountain’ Stuart hailed from in California. Her performance of 13.97m was 4th on the school’s all-time indoor list.

Shiloh’s previous best in the Shotput was 13.45m on 30 May 2021, which had already met the low SEA Games bronze medal standard of 12.51m.In the 2022 SEA Games, Ekawati 15.20m and Intadis 15.02m from Indonesia and Thailand secured the bronze. Neither girls are likely available for SEA Games due to NCAA school competitions. However, Shiloh and her sister Zion have not ruled out the possibility of representing the Philippines at the 2023 FISU World University Games in Chengdu, China July 28-August 2. 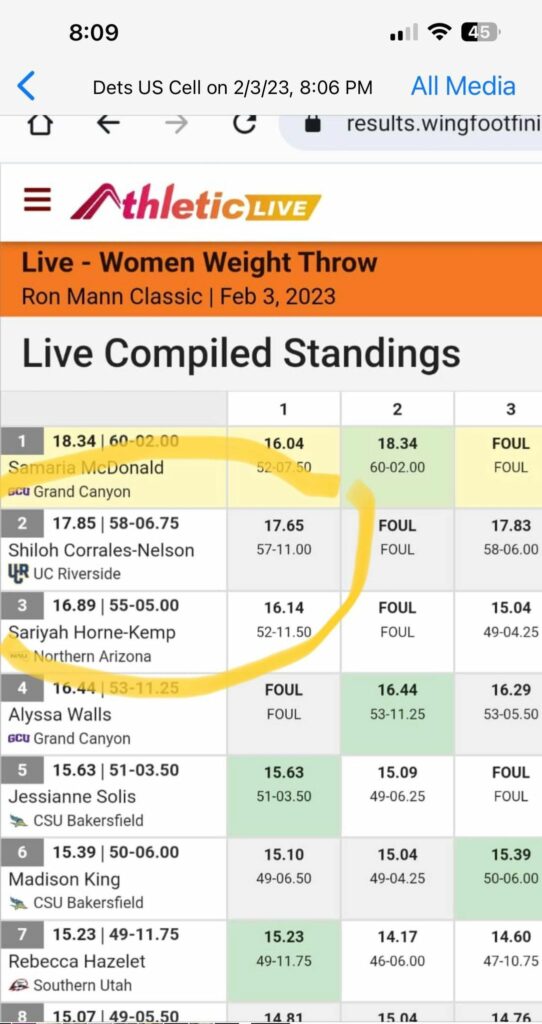 In the contrast, the SEA Games in Hanoi was won at 57.31m by Grace Wong Xiu Mei of Malaysia.

The performance of 56.30m would have seen Shiloh land silver at SEA Games had she joined in Hanoi.

Shiloh Corrales-Nelson made a ‘legitimate’ qualification for the 2021 SEA Games in Hanoi. In her secondary event, the Shotput.

Shiloh heaved multiple Personal bests of 13.20, 13.35, and 13.45m at the High-Performance #4 meet in Chula Vista. Her best throw of 13.45m was above the SEA Games bronze qualification mark set by the PSC/POC Taskforce of 13.36m. Chula Vista is where the US and several other National teams have their training facility.

Shiloh’s Performance is the best in Women’s Shotput in 46 years.

All three of the women mentioned above have already passed away.

The PATAFA had requested a maximum of 25 women in its entry by numbers list for the PSC/POC Taskforce on March 13, 2021.

So far, the following athletes have hit the bronze medal’s PSC/POC Taskforce criteria in the last SEA Games.

Not including relay athletes, Shiloh becomes #22 to qualify for SEA Games. Apart from previous medalists from 2019, Kyla Richardson (100), Yacine Guermali (1500, 3000), Kayla Richardson (100) are the only other new athletes to surpass the SEA Games Bronze mark in individual events.

Shiloh Corrales-Nelson showed consistency, securing her 2nd ever best Performance in the Hammer with 53.63m, just  15cm away from her National Record set just over two weeks ago. Shiloh’s Performance landed her 4th in the Big West. Emily Hallett of Cal Poly won in 58.82m.

Shiloh Corrales Nelson (UC Riverside) smashed her Filipino National Record with throws of 52.36m and 53.78m. These were Shiloh’s 2nd and 3rd of 6 throws (the other 4 were all fouls). This was at the Long Beach Throws Jump Festival in California.

The 19-year-old closed in on the challenging SEA Games 55.96m Bronze Medal standard.

Every Time she see’s the performance of someone like the Malaysian Girl nearly breaking the SEA Record. It motivates her to be better. She wants to be the best in the SEA Games one day. Said her Uncle Brett.

A Freshman at UC Riverside Shiloh Finished second to Senior Brianna Villanueva (UC Irvine), who hurled the Hammer 56.08m (note to Philippines Media they do not award medals at these meets). Villanueva made her PB on April 22 at 57.22m. Sina Fatafehi (California Fullerton) was third in 53.08m.

Shiloh will also contest the Shotput and Discus in this meet.  She is very close in the Shotput to becoming the first athlete that did not win a medal in 2019 to make the bronze medal standard for the 2021 SEA Games as per the PSC-POC Taskforce criteria.

Also, the 20lbs Weighted Throw record (an event only held indoors) for Junior and Senior has been added to Shiloh Corrales Nelson’s list of documents she threw 15.74m in 2020. This brings Shiloh’s list of National and National Indoor Records to a total of 7.

Shiloh Corrales Nelson broke the Philippine National Record of Loralie Amahit-Sermona (50.55m), a 2x Bronze medalist. Shiloh registered a new record of 50.63m at the Triton Invitational in San Diego. This improved on her 50.50m mark from two weeks ago.

The mark Ranks Shiloh #2 in South East Asia for the year behind Grace Wong Xiu Mei, the 2017 SEA Games Champion, threw a 62.48m just 1cm off the SEA Record Saturday at the Malaysian Grand Prix in Kuala Lumpur.

Shiloh, who is turning 20 later this year, still has a lot of improvement ahead of her considering that throwers prime in their late 20s earlier 30s. Loralie was 29 when she set the Philippine Record.

It was an incredible weekend for Shiloh, throwing a 13.03m season’s best placing second at the same meet in the Shotput, improving her 12.75m from the other week. Thus, heading closer towards the SEA Games qualification for 13.36m.

*any information used from here by Media must cite Pinoyathletics.info

Corrales Nelson came 5 centimeters away from breaking the Philippines National Record in the Women’s Hammer. Shiloh won the Chris Rinne Twilight meet on April 2 with a heave of 50.50m.

The Philippine National of 50.55m is held by Loralie Sermona who took the bronze medal at the 2005 and 2011 SEA Games. The last and only time a Filipino woman has taken a SEA Games medal in the Hammer.

Shiloh marks in the Discus, Hammer and Shotput are SEA Leading Ranks for southeast Asia in 2021. However, so far, only results have come in from Singapore in women’s throws.

The SEA Games Qualifying for Team Philippines as indicated by the POC/PSC Taskforce as the Bronze medal (anything less is self-funded). The marks are 13.36m Shotput, 45.28m Discus, and 55.64m Hammer.

Shiloh’s best performances rank her #2 in Hammer #4 in Discus and #5 in Shotput on the Philippine Women’s All-Time Lists.

50.50m was an improvement on Shiloh Corrales Nelson’s personal best from 2019.

As the Corrales family has now submitted her Filipino Passport to Pinoyathletics.

The 50.35m mark from 2019 is being ratified as a new Philippine Junior Women’s Hammer Record.  And it surpasses the previous mark of 43.39m by Aira Teodosio set on November 6, 2016, at the Weekly Relay Finals in Pasig.

The IAAF has already listed the Performance above.

Performances also being backdated include Shiloh 13.07m Indoor meet from 2020

The IAAF has recognized this Performance.