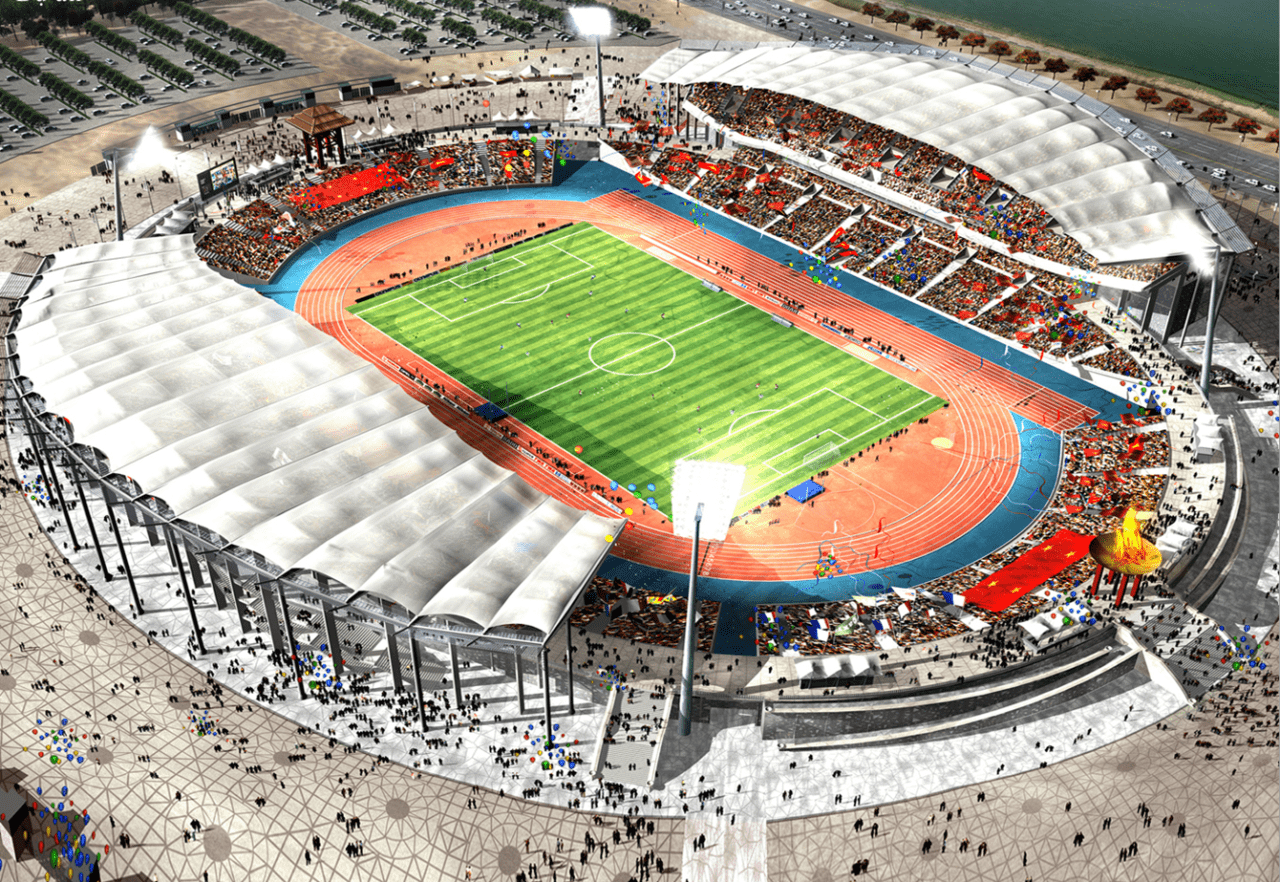 I have been advised from my sources that the SEA Games will be held in April 2022. No exact date has been announced, but the SEA Committee will decide that soon. 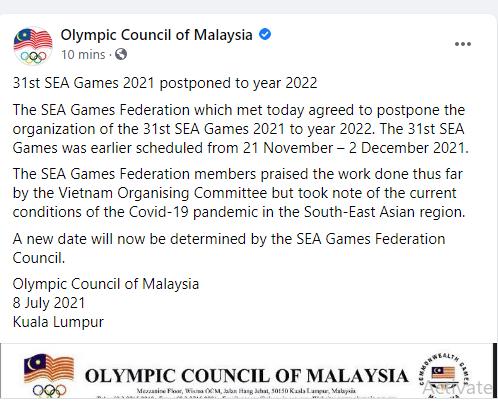 “The SEAG Federation will be meeting on the 24th,” Fernandez said during the Banana Kick podcast.

The coronavirus disease 2019 (Covid-19) situation in Vietnam has put the holding of the SEA Games in jeopardy, with cases rising at a record pace, although not as dreaded as in some other countries.

As of June 21, Vietnam’s seven-day average of new Covid-19 cases was at 378 after confirming 272 more infections.

One of the top models for handling the pandemic during its early days last year, Vietnam’s recovery rate plummeted to 40.3 percent (5,453 out of 13,530 total cases) mainly due to the ongoing spike and its interestingly slow vaccination drive.

Fernandez, currently a commissioner in the Philippine Sports Commission, said everything is bleak at the moment.

“We’ll never know yet. We really just have to wait (for) the decision (of the) SEAG Federation on the 24th,” he added.

Earlier this month, the Vietnam Olympic Committee (VOC) proposed to the SEAG Federation to postpone the SEA Games to July next year.

However, eight other national Olympic committees, including the Philippines, rejected the proposal mainly due to the athletes’ preparation.

The VOC might again propose the postponement during Thursday’s meeting. (PNA)

SEA Games 2021 is Postponed Till Next Year

The 31st SEA Games in Vietnam is scheduled from November 21 to December 2 in Hanoi and 11 neighboring localities. However, due to the increased risk of the epidemic, the Vietnam Olympic Committee sent a postponement letter to 10 other Southeast Asian countries.

Of the 12 venues for the 31st SEA Games, there are three places where the disease is currently complicated, namely Bac Ninh, Bac Giang, and Hanoi. In addition, there are other localities such as Ha Nam, Nam Dinh, and Phu Tho. , Quang Ninh, Hoa Binh, Hai Duong, Vinh Phuc, Ninh Binh, Hai Phong all have high potential risks.

A few days ago, Singapore’s senior sports leader, Mr. Lim Teck Yin, made a point of postponing the 31st SEA Games to next year or Vietnam sharing the hosting rights with neighboring countries, of which Singapore is willing to share. Shall.

In 1963, Cambodia also canceled the SEAP Games because of political instability. The canceled SEA Games are for everyone’s safety, not the organization at all costs.

Will the 2021 SEA Games be utterly canceled due to COVID??

In 2020 there was no southeast Asian meet inviting international athletes.

So the logistics and safety risks of a SEA Games could make matters complicated.

At the very least, we could see some events which are more of a COVID risk being excluded from the 2021 SEA Games. 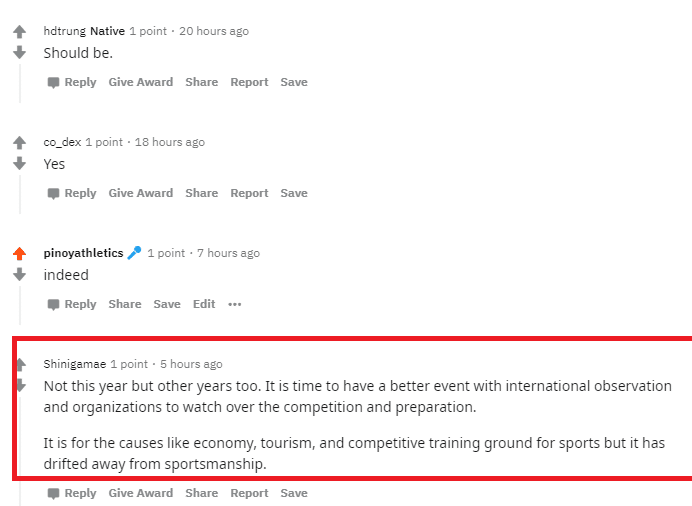 Will there be Rugby Sevens at the  SEA Games 2021?

The latest news from the SEA Games 2021, which will host in Hanoi, Vietnam, does not appear to include rugby sevens in the list of sports set to be featured. Although the Games in Cambodia are quite far off, much work will need to be done to include the sport in 2023.

It will be a significant blow for the SEA rugby nations if rugby is not included in the upcoming SEA Games.

This is the second time Vietnam will hold the SEA Games since 2003. Despite the postponement of the 2020 Summer Olympics to 2021 in Tokyo, the SEA games will still be held from late November to early December 2021 – only three months after the rescheduled Olympics.

The SEA Games usually include sports and events at the Olympic Games, but the host nation also has a big say and will include events.

On October 20th, 2020, Vietnam added 4 more sports to the roster to bring the total tally to 40 marks. Unfortunately, Rugby 7s was not one of them. Triathlon, bowling, jiu-jitsu, and esports were the latest additions, and you can view the full list of sports here.

Other SEA countries have asked the following sports to be included:

Vietnam currently does not have a national rugby union or federation. Still, social rugby clubs such as Saigon Geckos and Hanoi Dragons are rugby clubs based in the country for a long time. In addition, the ChildFund Pass It Back program has accelerated the sport with Vietnamese coaches players, particularly in the north of the country.

In December 2019, the new Asia Rugby President visited Vietnam and met with the Vietnam National Olympic Committee Secretary-General Mr. Manh Van Tran to discuss Rugby’s future in Vietnam. At the time, they agreed to “the concept to develop the sport in Vietnam with the support and help from Asian Rugby Federation and to support to establish National Federation in the coming time.

Asia Rugby President, Mr. Qais Al Dhalai, said in 2019, “I believe that today’s meeting with Mr. Tran was a huge success and big step into unlocking various doors which will help flourish rugby in Asia… the establishing of Vietnam Rugby Federation and collate every effort for the inclusion of Rugby in multi-sport event across Asia and in particular SEA Games 2021 and 2023.”

The final list of sports for SEA Games 2021  is officially announced 12 months before starting the SEA Games, which kick off on November 21, 2021, so time is running out.

KUALA LUMPUR: Shuttlecock kicking and vovinam – a Vietnamese martial art – are likely to be among the sports contested next year’s SEA Games in Hanoi.

However, these will not be the only sports in which hosts Vietnam hope to excel. The bulk of the events will probably be Olympics sports.

Vietnam has already emerged as the new sports powerhouse in the region, and they were the runners-up in the Philippines Games last year, sweeping 98 golds.

More impressive is that two-thirds of their gold medal haul was won from Olympic sports, including 16 and 10 from blue riband sports, athletics, and swimming, respectively.

Vietnam was also overall champions when they last hosted in 2003, bagging a whopping 158 golds.

The preliminary list of sports for the Hanoi Games is expected to be unveiled after a SEA Games Federation (SEAGF) Council meeting, which and will conduct virtually from July 22-23.

Vietnam’s government has picked Hanoi as the host city for the back-to-back 31st 2021 SEA Games and the 11th ASEAN Para Games in 2021. Hence rejecting a US$675 million bid by Ho Chi Minh City to organize the Games.

While at a meeting in Hanoi on Monday. Prime Minister Nguyen Xuan Phuc said the government agreed to a proposal by the country’s sports ministry. To let Hanoi host the regional events instead of Ho Chi Minh City.

Its experience of successfully hosting the 22nd SEA Games in 2003, the 2009 Asian Indoor Games, and many other major international sporting events. Hanoi was a more qualified candidate city, the government said.

The 31st edition of the SEA Games. It competed biennially among 11 countries in Southeast Asia and was scheduled in Cambodia before Phnom Penh asked to postpone the hosting until the subsequent Games in 2023.

The SEA Games Federation (SEAGF) therefore asked Vietnam. The designated host for the 2023 SEA Games, to swap places with Cambodia.

No To Ho Chi Minh City Hosting the SEA Games 2021

After Vietnam took over the baton, the Ministry of Culture, Sports, and Tourism proposed selecting Hanoi as the host city. Which is the most economical choice given the capital city’s already developed sports infrastructure.

While the money would go into constructing new sporting venues. Including a brand new 180-hectare sports complex in District 2. And they are covering the logistics of running the multi-sport event, according to the proposal.

Yet hosting the 2021 SEA Games would be an excellent opportunity for the southern metropolis to improve its international status. And open new doors for investment and tourism. The city’s deputy chairwoman Nguyen Thi Thu told Tuoi Tre (Youth) newspaper in January.

Nevertheless, Ho Chi Minh City has failed to convince the government to bid as Vietnamese leaders organize the sports competition at the lowest possible cost.

At Monday’s meeting. PM Phuc regarded the hosting as both Vietnam’s responsibility and honor as a constructive member of the Southeast Asian Nations (ASEAN).

“Hanoi must make the most use out of existing infrastructure. And refrain from building new venues or making new purchases,” he stressed.

So around 16,000 athletes and delegates from 11 countries in Southeast Asia are expected to attend the 2021 SEA Games and ASEAN Para Games and held from November to December 2021.

While Vietnam once organized the regional competition in 2003, events were held in Hanoi and Ho Chi Minh City.