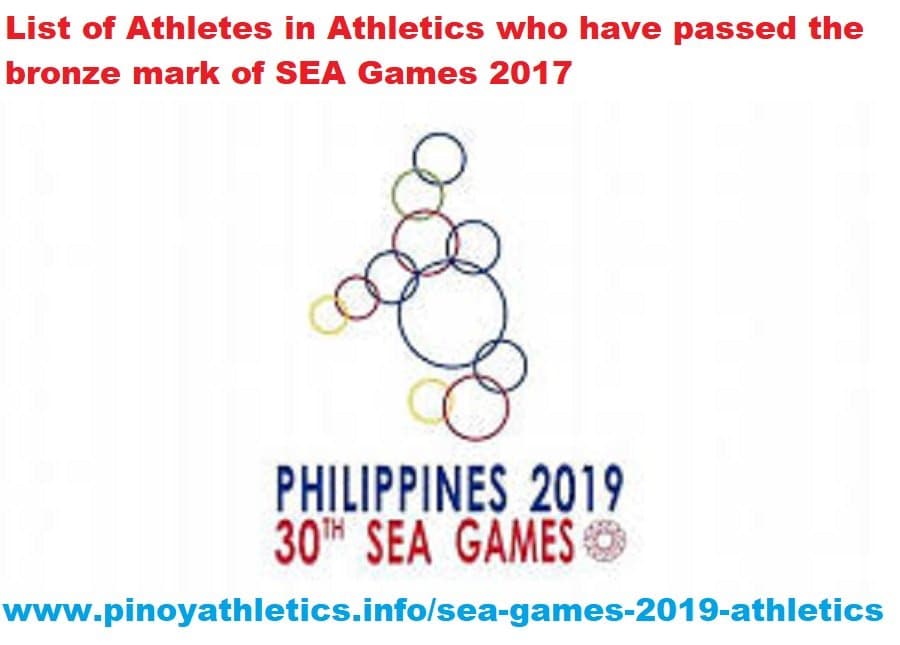 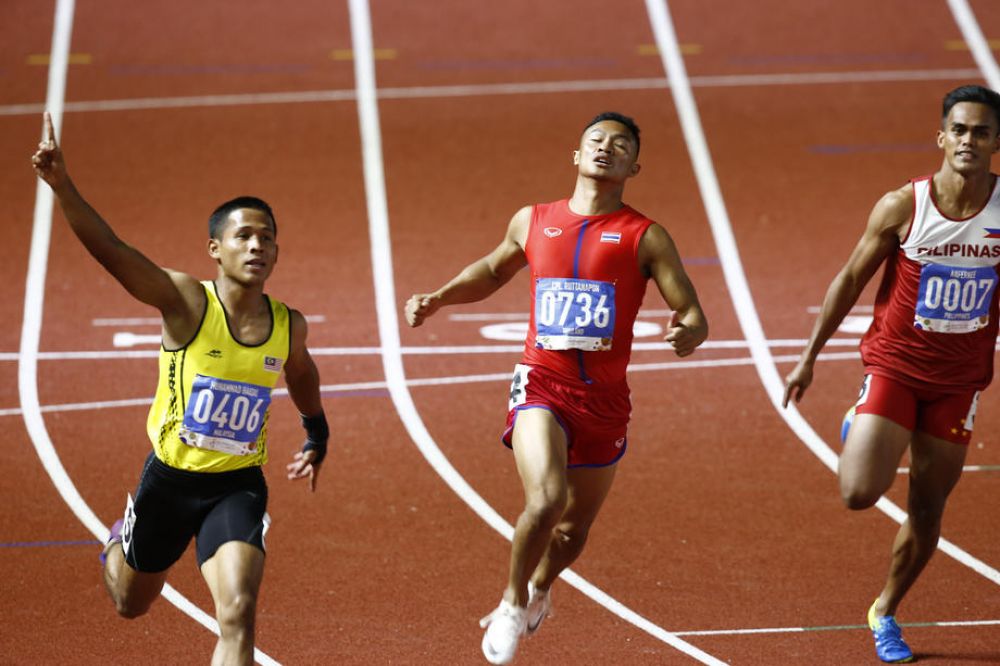 With the absence of defending champion Trenten Beram. It was 19 years old Tran Nhat Hoang who led a 1-2 sweep for Vietnam with his compatriot Dinh Son. Hoang a newcomer had narrowly beaten Son at the SEA Games trials 2 months ago with both clocking 46.48. Such was the strength of Vietnam’s 400m Men’s Depth that Quach Cong Lich and Luong Van who were 3rd and 4th at the 2017 SEA Games. Ended up 4th and 3rd at the trials and not qualifying into the individual 400m. Sunthonthuam who took silver in 2017, was relegated to bronze. 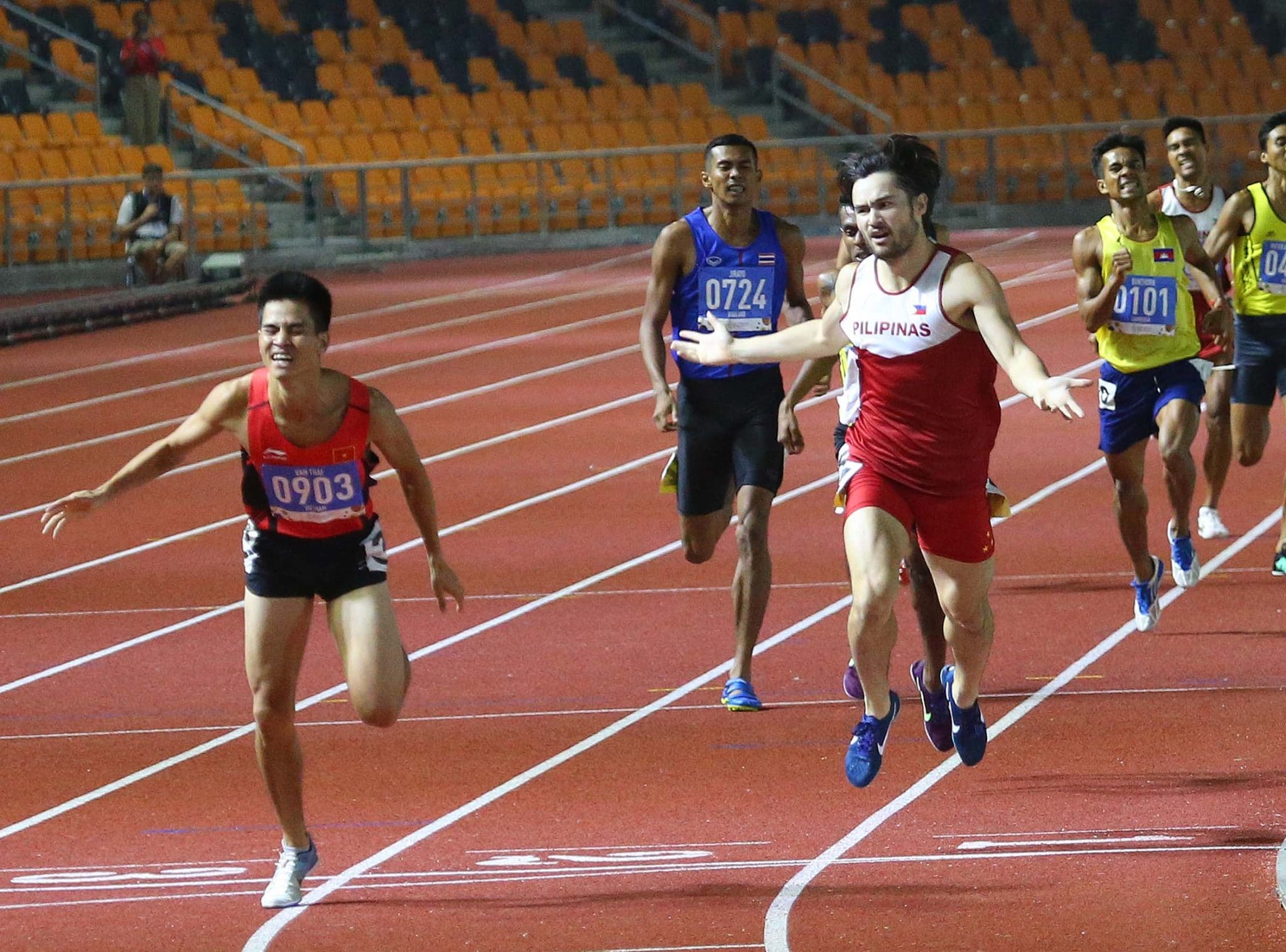 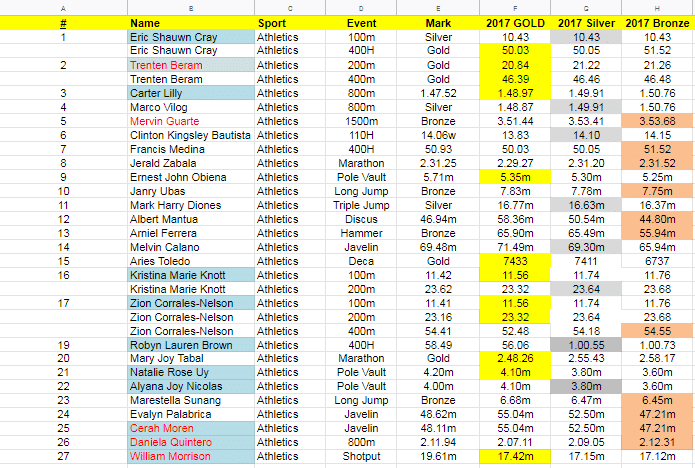 As of now, 24 athletes have made it past the Bronze medal standard. 9 of the 24 are Fil-Heritage athletes. All of them except Kristina Knott are training outside the Philippines. Ernest Obiena and Mary Joy Tabal are training in Italy and Japan.

It was announced before the 5th place was the qualifying. However, as per the  28th May Update SPECIAL BULLETIN!!! For the information and reference of “all aspiring Filipino athletes” to represent the Philippines in the 2019 South East Asian Games, here’s the list of events .

Please also note this is a disclaimer.

This is just a list of athletes who have passed the bronze.

Ultimately the final team will be selected by the PATAFA. And accredited by the POC. 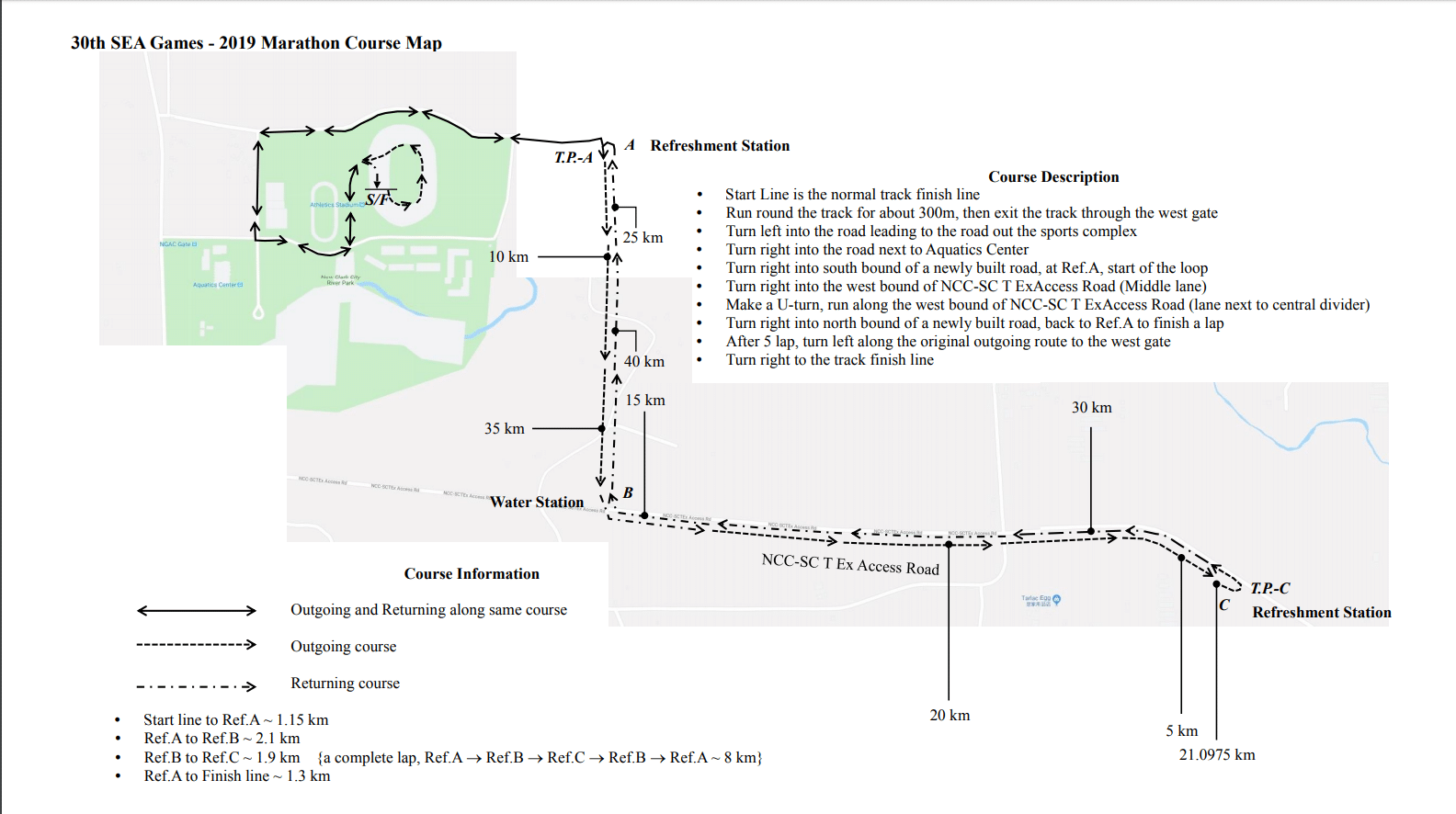 How on Earth did the NSAs come up with 220 Golds for the SEA Games that is disneyland movie material right there?

Think about it there is 54 sports in SEA Games, so that means each sport will have to get 220/ 54 = 4.07 golds so 4-5 golds each. Take into account some sports also only have 2 golds max available.

Then going through the list I can say about 20 of these sports will not get any golds at all. Not naming any yet as some NSA Leaders might get clucky with their hunches and instincts.

That is just looking at the basic logistics. I will try and come up with some sort of breakdown it seems the 220 gold count didn’t come with any form of break down by sport which would be interesting to micro analyze.

Badminton 0 Golds, based on the current world ranking lists, 2017 SEA Games, and Asian Badminton Website. Breakdown in below link

Based on the World Rankings.

4 Teams in Women Basketball after Singapore withdraws.
Thailand, Vietnam, Indonesia, and Philippines.
Thailand to win followed by Vietnam + Indonesia and then the Philippines. 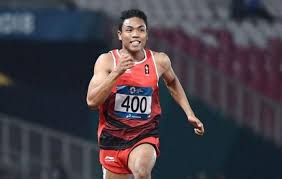 Lalu Muhammad Zohri of Indonesia Athletics Federation/PB PASI goes in as the overwhelming favorite for the Crown of the fastest man in South East Asia. Zohri has broken the SEA Record 3 times this year with times of 10.15 and 10.13 (silver in asian champs behind Kiryu of Japan. He then brushed up an impressive 10.03 at the Seiko Golden Grand Prix in Japan (behind former Olympic Champion Justin Gatlin 10.01 and Kiryu 10.02.

Another one to watch is Malaysia’s Jonathan Nyepa who has a PB of 10.28 from 2017 and has been training in Florida.

2015 SEA Games Champion Eric Cray of the Philippines, Kritsada Namsuwan of Thailand the 2017 SEA Games bronze medalist will also be in the mix. It’s unclear at this point whether Malaysia will field Khairul Hafiz Jantan the defending 2017 SEA Games champion at this stage.

Pinoyathletics Forecast for SEA Games
Gold – Zohri INA -times are a lot better than anyone else is really world-class with some very impressive runs against the world’s best, and 3 times has broken sea record. 10.20 is really like a jog for him.

Silver – Nyepa training in the united states PB of 10.28, has been consistently running int he 10.3-10.4 range of Malaysia

Bronze – Punpa of Thailand young guy just 20 very good 200 runners with 20.77. Currently mentored by Loren Seagrave one of the best coaches in the history of track and field. has been consistent at 10.4-10.5

Anticipating a Golden Double for Muhammad Lalu Zohri of Indonesia. Undoubtedly the best sprinter SEA has ever produced. With the top 3 in SEA all running faster than the PB and gold medal-winning time and the now-vacant sprint throne left by Trenten Beram of the Philippines (20.84). Zohri although ranked 3rd in South East Asia doesn’t run 200m very much and still junior has run 20.81. With a 100m PB of 10.03 and frequent 10.1-10.3 runs. It is expected he has a lot more in reserve as he ran the 20.81 rather unchallenged at the Junior Nationals in Indonesia.

Also on the move are two more youngsters Punpa of Thailand who has improved his PB from 21.18 to 20.76 (the 4th fastest ever time by a Thai sprinter). And Malaysian/Australia Russel Taib who broke the Malaysian National record and improved his PB this year from 21.30 to 20.77.

Such is the steep level of competition that SEA Games silver medalist Jirapong Meenpra is only ranked 5th in the rankings in 2019.

Philippine Entries – unsure but nobody is ranked top 10.

Vietnam has great depth in the 400. At the very top of the list
is Tran Nhat Hoang who took a new Vietnam record of 46.46 and improving his PB from 47.68 to 46.46 this year. At the final trials for SEA Games on Sept 16. Narrowly beating Tran Dinh Son in a blanket finish.

Dinh Son had got the better of SEA Games Champion Trenten Beram at the Asian Games drawing the same semi-final. He was also impressed in the Asian Grand Prix taking bronze twice.

With Beram no longer running the 400 titles is vacant. None of the top 3 have shown fine form and new athletes have emerged Suthonthuam the SEA Games silver is only ranked 8th and Cong Lich who was sea games bronze is not even qualified in the individual 400 ranked 9th.

The Philippines will be represented by Joyme Sequita who has run 47.41 this year and has a PB last year of 47.26 and Michael Carlo Del Prado who has been the big improver this year taking his PB from 48.29 to 47.49. The two getting the nod over the injured Udtohan.

Predicts – While the two Filipinos may improve on there bests they are quite far off medal contention.

Carter representing the Philippines is also within range of breaking the SEA Record of Batumulai Rajakumar of Malaysia which has stood since 1985 and the SEA Games record of 1:48.29 set by another Malaysian Samson Vallabouy in 1989.

2015 & 2017 SEA Games Champion Duong Van Thai of Vietnam dominates the field this year already nearly 3 seconds faster than the next placed athlete in 2019. Van Thai has a PB of 3:47.04 from the Singapore SEA Games.

While reported by a Vietnam newspaper but hopefully not true.  Most noteworthy is that other SEA Countries will have until Feb 28 to appeal for the inclusion of said events.

While Women’s High Jump, and Mens and Womens 10k or Walks are not big blows as we have no serious medal contenders based on SEA Rankings. Yet the exclusion of the Women’s Long Jump and Women’s Marathon bares a huge impact. In the Women’s Long Jump Marestella Sunang who is a medal chance having won bronze at the last 2 editions, was planning to retire after 2019 SEA Games but could be forced into early retirement if the cancellation of the event pushes through.

While its baffling as to why the Women’s Marathon would even be canceled. As Mary Joy Tabal is probably the strongest gold medal candidate in Philippine Athletics in Women. And she too may be forced into early retirement with the exclusion of the event.

While the Philippines has the prerogative as the host. Should it actually remove any events in Athletics? As these are all Olympic events. And it may tarnish the value of the event itself to the Athletic Community of not just the Philippines. But also South East Asia as a whole. If any event should be removed it should be ‘The Mixed Relays’.

Article from Vietnam News below. 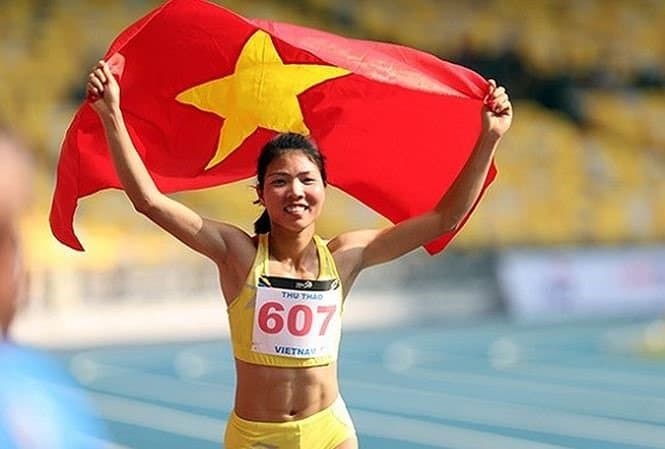 Viet Nam News HÀ NỘI — The Philippines will not hold several key track-and-field events at the 30th Southeast Asian (SEA) Games next year, a decision that will likely affect Việt Nam’s achievement level in the games as one of the leading athletics teams in the region.

At the previous SEA Games in Malaysia, Việt Nam topped the athletics ranking with 17 gold medals – a record for the biennial competition.

The organizers revealed a list of 41 events that did not include women’s long jump, high jump, heptathlon, the marathon, the 10,000m race or the men’s and women’s walk.

Việt Nam is defending champions in women’s long jump and high jump and silver medallists in the 10,000m and women’s walk. The marathon has been a basic event of every SEA Games as it has been held at the Olympics since the first edition in 1896.

According to Nguyễn Mạnh Hùng, Deputy General Secretary of the Việt Nam Athletics Federation. The removal of these traditional events is unreasonable. Việt Nam and other countries will have a chance to submit their opinions on the list before the final version is announced on February 28.

The 30th SEA Games will be held from November 30 to December 11 in the cities of Manila, Clark, and Subic. It will be the biggest ever edition with a record of 56 sports. — VNS