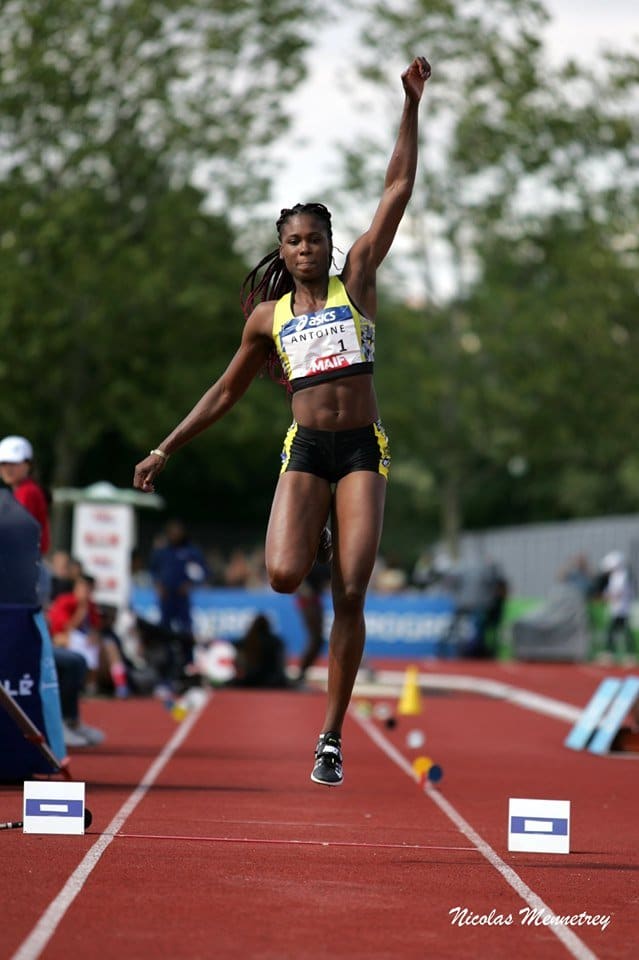 Sandisha Antoine St Lucia Athletics is celebrating her 28th birthday in a very unfamiliar place. She is uncertain, perhaps a little bit scared.

And indubitably very excited about what lays ahead for one of Saint Lucia’s genuine champions.

Her mark of 12.11 meters was enough to win her silver in the under-17 girl’s triple jump at the 36th CARIFTA Games on Providenciales, Turks, and Caicos Islands. Chantel Malone of the British Virgin Islands, the gold medalist that day, would win long jump gold at the 2019 Pan American Games in Lima, Peru.

St Lucia Athletics Sandisha Antonine Up and Down Year

Sandisha Antonine finished 12th in the triple jump in Lima. However, 2019 has been an odd year for her. Born in Belle Vue, Vieux Fort.

Sandisha Antonine has spent most of her life in Martinique.

One of the leading horizontal jumpers from the English-speaking Caribbean since she was a teenager.

However, even though she has declared her intention to break Michelle Baptiste’s 22-year-old national record of 6.47m.

It is a triple jump that is her pet event.

Barely having competed in 2017.

The pattern of improvement and drop-off goes back to her early twenties.

Even after winning that CARIFTA silver medal in 2007.

Few Saint Lucians knew much about the teenager who spoke as much French as she did English, or maybe even more French than English.

This, although she went on to compete at the Commonwealth Youth Championships and traveled to China to represent Saint Lucia at the 2008 Beijing Olympics as a youth ambassador.

A stone’s throw from her birthplace, with her family cheering her on.

That meet was the most successful ever for Saint Lucia and the most memorable for many of the participants outside of Saint Lucia.

A year later, she repeated as CARIFTA champion in the Cayman Islands.

Then came an injury-riddled 2011, through which Sandisha focused on accountancy and management studies at DCG Lycée Joseph Gaillard in Fort-De-France.

A comeback year followed in 2012 when she set three new career-best marks.

At the French Under-23 National Championships in Reims, her 13.16m national record was second in the triple jump, and she won an OECS long jump title.

Another personal-best, another national record in 2015, only to come full circle in 2017, and almost starting all over.

This time around, Sandisha Antonine is truly starting over.

“I couldn’t accomplish everything I was hoping for.

It’s been a roller-coaster, not only physically, but above all mentally, with big periods of doubt and questioning.

I still got to learn a lot about myself, and especially I know I haven’t reached my limits yet!”

And so, with an Olympic year in 2020, with support from the Saint Lucia Olympic Committee and her sponsors LS Trade (a range of natural products for muscle recovery and everyday use for body, hair, and diet), the French-Saint Lucian jumper – ranked as high as 112th in the world for one week – has moved to Jamaica. There, she will train with world number 2.

She is also Sandisha’s new training partner. Just three months separate the two, but a world of experience and attainment.

That gap can close quickly, as Ricketts has shown the past few years. Formerly a relatively unknown jumper, she is now one of the world’s best.

That’s thanks in part to the tutelage of her husband/coach, Kerry-Lee Ricketts.

The jumps and strength and conditioning coach at The University of the West Indies, Mona, is Sandisha’s new coach.

“I needed to come out of my comfort zone, experience a new program, and most of all have some more focus on my first event – triple jump,” explains Sandisha, whose statuesque figure and stunning looks have also gained her some acclaim as a model. “I needed to be in an environment where I can only focus on track.”

And so far, so good.

The early returns, she says, have been promising. “It’s been good for a start; we’ve not gotten to the heart of the program yet.

But I can see that the training methods are different from what I knew.

Aiming for the Olympics, Tokyo 2020, is the plan. I know I can be way better than what I am now and have not exploited my full potential.

And having the world silver medalist in my training group is an extra boost.”

If this Vieux Fort native can make it to Japan by way of Kingston 7, she will surely have taken inspiration from her former training mate at Asco Inter Atlas, Albert Reynolds.

The javelin thrower from Babonneau won his first Pan Am medal and made his first World Championships field this year at 31.

Next year similarly, Sandisha Antonine is hoping to introduce herself to the world as well.