A reticent man. Who struggled with health issues in his last years. Romeo Gido passed away at the relatively young age of 57 on Saturday, March 9, 2019. However, he may have been overshadowed by the Gintong Alay’s superstars, most notably his long-time rival and teammate Isidro Del Prado.

Born August 29, 1961. Gido was part of the very famous Bicol Express. An essential part of Filipino Sports culture. As Bicolanos Gido, Del Prado, and Larce – all from Sorsogon – formed the team, sportswriters christened the Bicol Express’s relay, a play on the region’s famous coconut-based dish. Bicol Express was also the name of the old PNR train line from Manila to the Bicol region.

He was part of a very long lineage of successful 400m milers. He was coached by a duo of very experienced coaches Santos Magno Jr. and Magno mentor Arsenio Jazmin; both had been very good 400m runners in their time, with Jazmin making 4th place at Asian Games one year. 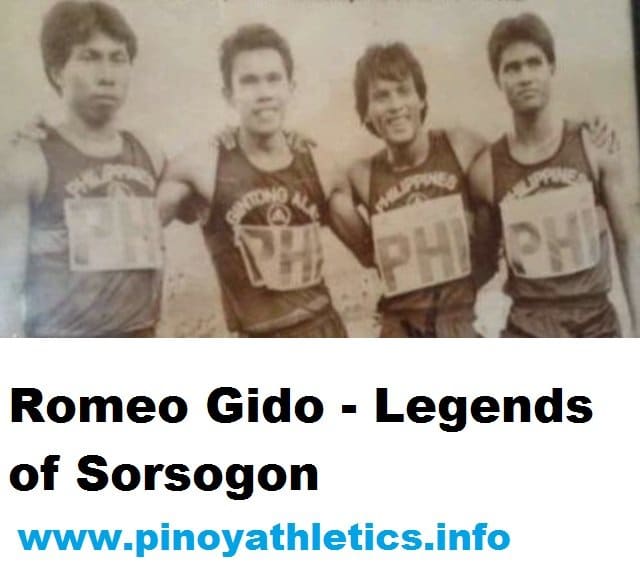 Gido stood out in 1983 national open when he finished 2nd in the 800m, but coaches noted his fine run for Navy’s 4x400m relay team, and instantly, he was taken into the national team.

Along the Trail at the Merdeka Games in Malaysia. Gido beat the top man in South East Asia for the last 3 years and SEA Games Champion Batumalai Rajkumar  of Malaysia 1:51.2 to 1:51.4. The Filipino pulled of the biggest upset of the day when h e pipped Rajkumar who had lead all the way. While the Thai Coaches protested unsuccessfully that Gido had committed lane cutting.

The 24-year-old Romeo Gido went to his first SEA Games in 1985. In the shadow of several other stronger runners. But surprised when he qualified fastest from the heats in 48.05. In the finals, Romeo Gido finished silver to Malaysia’s Mohamed Nordin Jardi 47.18, 47.50. Isidro Del Prado was shockingly unable to finish the race. It was at these same games Gido teamed with Del Prado, Larce, and Pagaliluan. And set a still-standing Philippine Record of 3:06.58.

A late bloomer Gido ran his 400 PB 47.2ht at the age of 27 in Pasig in April of 1989. A sewing machine round the bend, Gido set a National Indoor record of 47.63 at the World Indoor Athletics Champs in Budapest. This mark stood as the national indoor record for 29 years until Trenten Beram broke it.

Gido finished 2nd in the 1988 ASEAN Cup, Clocking 47.57 behind Watebossy of Indonesia.

After his career, Romeo Gido was a national coach. Among his many awards included National 800m Record Holder and SEA Games Middle Distance Champion John Lozada and SEA Games 800m silver medalist Model Dique. I fondly recall Gido carefully and meticulously timing rest interval and pace for John leading up to the National Record at the 2002 Asian Grand Prix. In which Lozada ran a still standing 1.47.77 National Record.