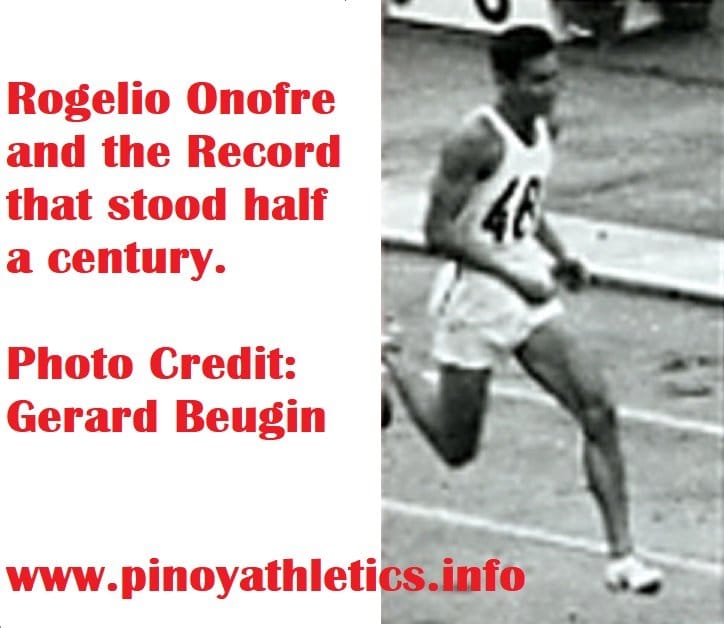 Rogelio Onofre and a record that stood nearly half a century

He was the last Filipino 100m-200m sprinter to be heralded Asia’s fastest man.

His career as a sprinter spanned three decades from the late 1950s to the early 1970s.

Onofre began off as a high jumper in 1957 at the Regional PRISAA, qualifying for the Asian Games in that event.

He attended the 1958 ASIAN Games but failed to feature in the final of the top six.

After a disappointing Asian Games, Onofre switched his focus to the 100m in 1959.

Onofre is undefeated over the 100 Meter Dash among the Filipinos, but he did concede a defeat to the late Arnulfo Valles at the national open over the 200-meter dash.

The following year he would join a relay team to the 1960 Rome Olympics with Claro Pellosis, Isaac Gomez, and Remigio Vista; the team registered 41.4/41.55a but finished fourth in heat 2, failing to qualify for the next round.

This would, however, prepare them well for the Asian Games.

This performance made him the favorite for the Asian Games title later that year.

Accrediting as 10.57A standing as the national record and not broken until 2007.

At the 1962 Asian Games (26 August) in Jakarta with 4 heats, in the first heat Md. Sangat of Indonesia set a new Games Record of 10.5, which Onofre and Hideo Iijima of Japan equaled in heat 2 and 3.

Sarengat then improving this record to 10.4 in the first semi-final in which Khaliq, the winner in 1954, was eliminated.

In the final, Onofre, expecting a recall, was the slowest away, and Jegathesan showed ahead after 10 meters. Still, the Filipino brilliantly made a recovery and was a fraction ahead of the field after 50 meters.

Sarengat closed strongly in the final stages to become the first Indonesian to win an Asian title, and Jegathesan snatched second place in the last few meters.

(Jegathesan, according to newspapers, clocked at 10.6, but according to reports, was much closer to Sarengat than the timers ended up with). Despite missing out on the gold after having it on-site after 50 meters. Onofre set about helping the Philippines defend its 4x100m relay title they had won in 1958.

Vista,  Gomez, Pellosis, and Onofre as anchors set a new Games record in the heat in 41.1. Indonesia won the second heat in 41.6.

In the final, the Indonesian broke the tape first, but he was disqualified for passing out of the zone earlier in the race in an odd twist.

Onofre and his countrymen had defended the Asian Relay title.

It would be the last time the Philippines would win a gold medal in this event.

At a 1963 meeting of US Servicemen vs. Filipino athletes at the Rizal Memorial Stadium, Onofre finished third in 10.9, behind Americans Norman Jackson (10.4) and Clarence Riley (10.8).

Onofre would take part in his second Olympic Games in Tokyo in 1964, qualifying for the individual 100m.

In 1964 he finished 5th in heat 8 and failed to qualify for the next round.

Onofre was the victim of a lightning strike this year in which a bolt struck his house. And left him critically injured.

Electrocution Onofre was eliminated in the first semi-final at the Asian Games in fifth in 10.8.

He had the eighth fastest time, but only the top four from each semi went through to the finals.

The Philippines were without a finalist for the first time since the series began in 1913.

Onofre, however, would go on and help a relay team of William Mordeno, Remigio Vista, and Arnulfo Valles win the bronze medal in the 4x100m Relay. He recorded the best time of 21.7 in 1967 for the 200m.

The high altitude in Mexico may have helped a little.

However, by this stage, the fact he was nearly 30 and the world’s best sprinters had dramatically improved.

Jimmy Hines of the United States won the final, being in 9.95, who became the first man to break the 10-second barrier. Thus he drew near the twilight of a long career for a sprinter.

Interestingly he also participated in the 110 Hurdles clocking 15.01, finishing 6th in heat 4, and failing to advance.

Onofre was forced to withdraw from the 1971 Singapore Open due to recovery from an appendicitis operation.

At this stage, he still held the Asian Games joint record at 10.4.

Onofre finished fourth at the 1971 Malaysia Open behind the next generation of stars Yeo Kian Chye of Singapore, Tokal Mokalam of the Philippines, and Malaysian Thamboo Krishnan, all registered 10.6, with Onofre running 10.8 for fourth.

At 80 years of age, Onofre is still alive and living in the United States with relatives. His cousin, Editha Corrales’s granddaughter, is Zion Corrales-Nelson, the National 200m Record Holder.