Big PB! for Robyn Brown as she closes in on the National Record in 400 Hurdles

Robyn also closed in on the National Record just .08 seconds away from the Great Elma Muros Posadas of 57.57 which was set 30 years ago.

The Olympic Qualifying standard is 55.40 for 400 Hurdles for Womens.

Meanwhile In Sweden at the Folksam Grand Prix on June 13.
Kristina Knott clocked 11.54 to place 2nd in her 100m womens event behind A Race behind Anna Bongiomi of Italy 11.42.
While Eric Cray clocked 51.05 to place 5th in the Mens 400 Hurdles, won by Thomas Barr of Ireland in 49.25.
Their next meet will be on June 22. While Knott can look at qualifying on the universality rule as the best performing female track athlete from the Philippines.
Cray would need to qualify on Rankings by points or hit the standard of 48.90 by June 29. He clocked 49.68 on June 5 at Miramar his best performance since 2018.
And NO PHILIPPINE MEDIA they did not award Gold, Silver, and Bronze medals here.

Brown opted to run the 400 meters this weekend at the Franson Classic in Azusa (April 10) and treated herself to a personal best of 55.55.

Brown lopped off nearly a whole second off her previous personal best of 56.47 set at Fullerton almost 2 years ago on May 3, 2019.

Brown finished 4th in the 400m A Race. She was behind three members of the Brazilian national team. The event was won by Tiffany Silva Marinho of Brazil, who clocked 51.88, about 1/2 a second off the 51.35 Olympic Qualifying standard.

The Performance also ranks Brown #8 on the All-Time List of Filipino Women 400m runners. She was not previously in the Top 10 with her previous personal best.

Brown was also the anchor runner for the Philippines Women’s 4x400m at the SEA Games, taking her team from 4th to Bronze on the final place of the leg. 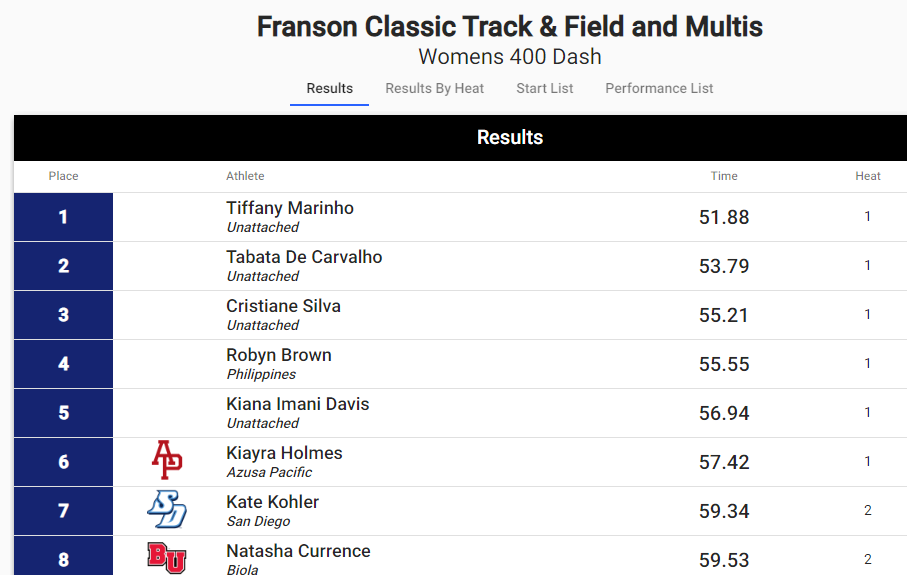 *Please note any material use from Pinoyathletics by media must be cited.

2019 SEA Games 400 Hurdles women’s Bronze Medalist Robyn Lauren Brown clocked 59.26 in 400 Hurdles to finish 4th in the Texas Relays at Austin, Texas.
Brown, whose PB is 58.49. Had her opening race for 2021 took the season lead for Southeast Asia.

UPDATE: Robyn Brown took Bronze at the 2019 SEA Games behind Huyen and Quach of Vietnam.

Robyn Lauren  Brown stunned the athletic community. With a 4 sec win over UAAP Champion Marilyn ‘Daffy’ Avila at the national open. Robyn has now secured her Philippine Passport.  A delighted Brown posted this on Facebook. 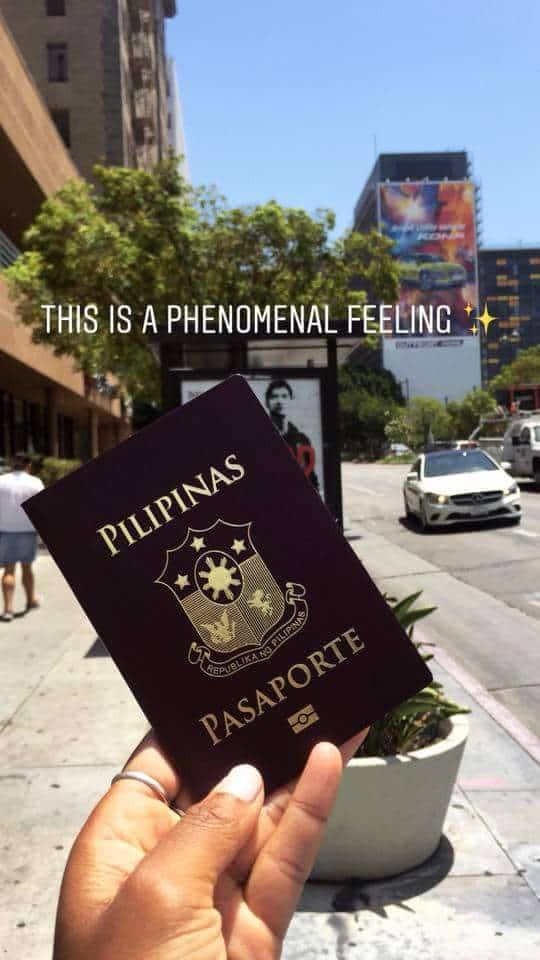 Leading up to the National Open win in June. In contrast, Brown has a Personal Best of 59.51 set in Torrance at the prestigious Mt. Sac Relays. However, she timed 1:01.80 at the Philippine Nationals, which is somewhat far from her PB. Due to the traveling (some 11 hours Manila to Ilagan), long season, and lack of a quality opponent.

How does this change the local landscape?

Robyn Brown already made a huge impression by beating a former national athlete (3 years in the training pool, in 2 separate streaks), Marilyn ‘Daffy’ Avila. Avila herself on the local scene was the #1 Hurdler and the UAAP Champion. So a 4-second dominating win really sent shock waves.

Now that Brown has secured her Passport, she is ranked #1 with her 59.31 in the Philippine Rankings. As performances dated back to January 1 of the year, the passport is obtained (this year) are eligible for rankings. Still, no new records are eligible only from the passport’s issue date onwards (July 2018).

Brown is now the #1 Ranked for Selection for SEA Games in the Philippines next year. She is followed by Palaro Recor Holder Riza Jane Valiente, from Bohol but now at Senior High school at JRU. Valiente has a hand-timed 1.01.5, and she was the most qualified athlete for the World Juniors but despite this. The PATAFA still went ahead and sent Edwin Giron Jr. (800 8th in Asian Juniors), who could not secure a Visa for the meet in Finland. So and sent no entry.

However, another Fil-Heritage athlete is looking at getting a passport in the Women’s 400 Hurdles who has a PB of 58.77. If that were to happen, these two would be the top 2 contenders to represent the Philippines at the 2019 SEA Games.

Meanwhile, the Top 2 Juniors Valiente and Bernalyn Bejoy, both 17 (1:01.9), will be competing at the ASEAN School Games in Kuala Lumpur, Malaysia.

How she would fare at SEA and Asian Level 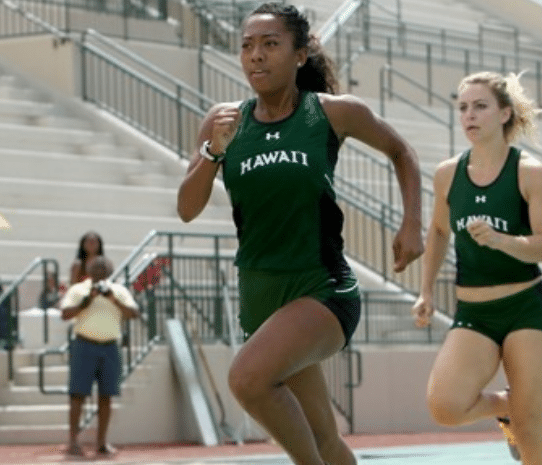 With the retirement of SEA Games, Champion Nguyen Thi Huyen of Vietnam, who has decided to start a family, leaves the crown vacant. However, Vietnam has prepared for this with Quach Thi Lan, who took the silver two years ago in Singapore 2015 SEA Games, clocking 57.03 so far this year. Quach has a PB of 52.06, so she has room to go 55 if she has to. Currently, Robyn Brown is seeded a distant second to Quach. With SEA Games silver medalist in 2017, Dipna Lim Prasad is sitting in third with 59.55 but has a PB of 59.24 from 2015.

With this in mind, we think that Robyn Brown will be challenging Dipna Lim Prasad for Silver. Vietnam holds onto Gold with its new 400 Hurdler as Quach has too much 400 speed for the other two to deal with. Nobody else this year has broken 1 minute.

So at Asian Level then?

In conclusion, Quach ranked #5 in Asia. Brown is ranked around 25-30. But take into account some countries have more than 2 runners ranked ahead. However, due to a low turnout in 2014 of just 9 runners, 59.93 made finals at Asian Games. So we look at the 2017 Asian Champs, which also had 12 athletes with 1.01.60 last in the final. Off both these results with her PB, Brown can place about 6th at Asian Level.