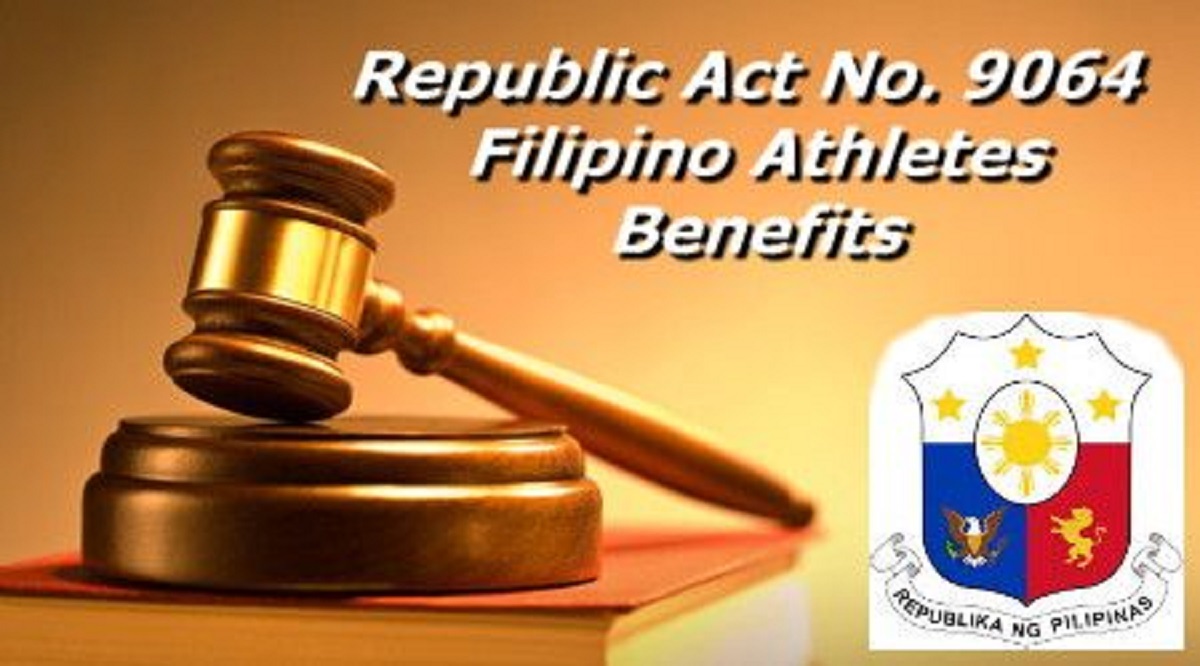 Republic Act 9064 – AN ACT GRANTING CASH AND OTHER NON-MONETARY BENEFlTS AND INCENTIVES TO NATIONAL ATHLETES, COACHES AND TRAINERS, APPROPRIATING FUNDS THEREFOR AND FOR OTHER PURPOSES

Congress of the Philippines
Eleventh Congress

AN ACT GRANTING CASH AND OTHER NON-MONETARY BENEFlTS AND

APPROPRIATING FUNDS THEREFOR AND FOR OTHER PURPOSES

Section I. Short Title. – This Act shall be known as the “National Athletes, Coaches and

Section 2. Statement of Policy. – The State shall promote excellence in sports and through

sports by providing for the welfare of national athletes, coaches, and trainers competing for

recognition to the country by winning in international competitions.

(a) National Athletes – shall refer to athletes who are Filipino citizens, members of the

citizens, members of the national coaches and trainers pool, recognized and accredited by the

may qualify for the Olympics or World Championships.

Section 4. Benefits and Privileges for National Athletes, Coaches and Trainers. – Any

national athlete, coach and trainer who is currently registered as such before the PSC shall be

entitled to the following:

utilization of transportation services, hotels, and other lodging establishments, restaurants

(b) minimum of twenty percent (20%) discount on admission fees charged by theaters,

cinema houses and concert halls, circuses, carnivals, and other similar places of culture,

within one hundred eighty (180) days from the approval of this Act;

subject to the guidelines and qualifications by the implementing body; and

extended to the athletes.

The Bureau of Internal Revenue (BIR) shall, as soon as possible, provide for the rules and

regulations for the implementation of this Act.

Section 5. Scholarships. – a national athlete who wins in an international competition or

colleges and universities in order to complete a college or university degree. The winning

Likewise, the Commission on Higher Education (CHED) and the Technical Education Skills

their institutions for winning national athletes.

Section 6. Retirement Benefits. – Any national athlete, coach and trainer who wins in an

competition or training as certified by the PSC. Such lump sum amount shall be extended

sixty (60) days after the filing of the retirement papers.

Section 7. Death Benefits. – Upon the death of any national athlete, coach and trainer, his/her

For purposes of this Act, primary beneficiaries shall refer to the legitimate spouse, legitimate

or illegitimate children. Secondary beneficiaries shall refer to the parents, and in their

absence, to the brothers or sisters of such athlete, coach and trainer.

(a) For gold medalists:

(b) For silver medalists:

For competitions with less than five (5) participants per team, the team shall receive the same

cash awards for individuals medal winners as herein provided, to be divided equally among

the team members actually present during the competition.

For competitions with five (5) or more participants per team, the team shall receive twice the

cash awards for individual winners, to be divided equally among the team members actually

present during the competition:

Provided, That for demonstration and exhibition sports events in the Olympic Games,

the existing game records or the previous placings in non-measurable events.

Section 9. Benefits, Privileges and Incentives for Past Achievers. – Any national athlete who,

prior to the enactment of this Act, had won gold, silver or bronze medals in international

competitions except SEA Games, shall be entitled to the benefits and privileges provided

this Act. Such incentives shall be the difference between the cash award received under

Administrative Order No. 352 and the cash award provided under this Act.

Section 10. Incentives for Coaches and Trainers. – coaches and trainers shall also be entitled

least one (1) year prior to the international competition. Certification to this effect by the

individual athlete or team captain shall be in writing.

that shall accredit and recognize coaches and trainers. It shall be composed, among others, of

representatives from the PSC, POC and the academic community, preferably a professor in

Section 11. Adjustment of Cash Incentives. – The PSC is hereby authorized to adjust the

schedule of incentives in Section 8 hereof, based on studies, consultations and public

hearings with relevant agencies to reflect the economic needs of the athletes. No

memorandum, order, or issuance shall diminish the prescribed schedule of incentives.

Donations and gifts from individuals, institutions or groups shall be construed as distinct and

Section 12. Funding. – The amount necessary for the implementation of the cash incentives

Philippine Amusement and Gaming Corporation (PAGCOR), to be remitted directly as a

special account to the National Sports Development Fund (NSDF) of the PSC. This is in

addition to the regular income share of the PSC pursuant to Republic Act No. 6847.

athletes at the elementary and high school levels in track and field, swimming, badminton,

class competitors. Said fund shall be administered by the Department of Education, Culture

Section 13. Implementing Rules and Regulations. – The PSC, in coordination with the POC,

DECS, CHED, TESDA, among others, and other concerned agencies shall promulgate and

Section 14. Separability Clause. – If any provision or part of this Act, or the application

thereof to any person or circumstances, is held invalid or unconstitutional, the remaining

circumstance shall remain in full force and effect.

parts thereof inconsistent with the provisions of this Act are hereby repealed, amended or

Section 16. Effectivity. – This Act shall take effect fifteen (15) days after its approval and

publication in the Official Gazette and/or in two (2) newspapers of general circulation,

FELICIANO BELMONTE JR.
Speaker of the House of Representatives

LUTGARDO B. BARBO
Secretary of the Senate

GLORIA MACAPAGAL-ARROYO
President of the Philippines