Olympian, 5x SEA Games Champion in the Steeple Chase, Former President of the National Training Pool in athletics, and an all-around nice guy.

Pinoyathletics proudly welcome Rene Herrera into the Legends of Track and Field.

Herrera was born and raised in Jordan, Guimaras. He is the son of Rodrigo Herrera, an establishment janitor, and Nenita, a former housekeeper.

Herrera started running in high school[7] although, for a time, he was primarily an amateur boxer, competing in that event until the age of 17. However, he stopped boxing with a record of 20 fights and 5 losses. Subsequently, Herrera entered the annual Milo marathon that he won, enabling him to qualify for national competitions.

At the 1999 National Open, Herrera was in his first senior national open. Finished with the bronze behind Daud Mama and 6x SEA Games Champion Hector Begeo, the national record holder in the event Begeo at this stage was 36 years old and approaching the end of his long career with the Philippines that had begun in 1981.

He also took 3rd in the 10k Behind Eduardo Buenavista.

However, Herrera did not qualify for the 2001 SEA Games in Malaysia. Consequently, two athletes better at the time, Buenavista and Daud Mama took gold and silver for the Philippines in that 3K Steeple Chase men.

When he was accepted into the national team, Herrera trained in Baguio under the master coach ‘Super’ Mario Castro.

Castro, a well-established coach already and a former SEA Games 10,000m champion from the Gintong Alay era, molded Herrera into a multiple SEA Games Champion in the years to come. 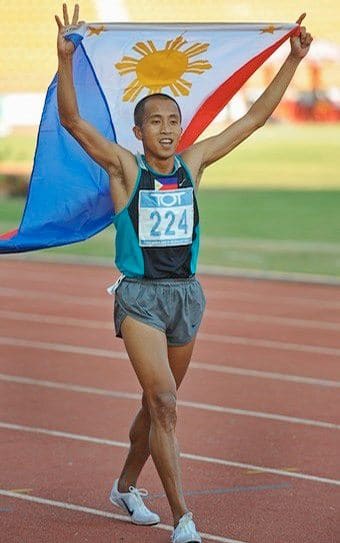 By 2013 in Myanmar, a new kid was on the rise Christopher Ulboc Jr of the Philippines. Unfortunately, Herrera had been suffering calve problems most of the year.

Which had manifested at the national championships, where he was unable to finish. Herrera led the first half of the 2013 SEA Games, setting the pace for Ulboc, then faded to 4th with Calf muscle pains.

By then, 36 years of age, Herrera was given a final chance to redeem himself at the 2015 SEA Games in Singapore. Ulboc went on to defend his title.

With Herrera fading to 10th of 11 runners in 9:52.38. And shortly after that, he retired. And then had a short stint as a national coach.

After that focusing on his military career with the Navy.

One athlete Herrera trained while still an athlete was Jessa Mangat, who at one stage held the national record for the Women’s 3K Steeples before Fil-Heritage Athlete Jessica Lyn Barnard broke it. 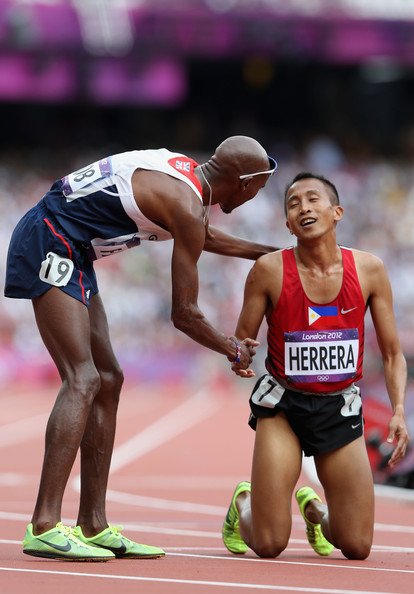 Herrera is a Philippine Navy seaman, 2nd class, and has competed in Southeast Asian, Asian, and Olympic Games.

One of his memorable moments was when Olympic Champion Mo Farah of England helped him after Herrera famously finished last in the 2012 London Olympics.

Five-Time SEA Games champion Rene Herrera won the Steeple Chase event in a time of just below 9m20 (official time still to come), albeit far from his personal best of 8:47, Seasons best of 9:14, and SEA Games standard of 9:04.

The 35-year-old battled it alone the last lap in the hot sticky weather to win the race.

NCAA Champion Mervin Guarte did not finish the race after having won a heat of the 800m.

Herrera will next feature in the finals on November 15-16, qualifying with the weekly relays’ fastest time. The meet organizers looking to put the event first at 7:00 to allow Herrera a better chance to qualify for finals.

When I was young it was my dream to run with Rene Herrera and be able to train with Kuya Bertek (Buenavista) now I go to live it so I’m so happy.

Said the 24-year-old Ulboc in regard to the men who inspired him to become SEA Games Champion.