There is not just one but two Filipina sprinters at the 2021 Tokyo Olympic Games also qualifying with the universality rule along with Kristina Knott of the Philippines is Regine Tugade-Watson who represents Guam (2 Filipino parents). Will lineup in the 100m while Kristina Knott is in the 200m.
This will be Tugade’s 3rd Olympics she ran in 2012 and 2016.
The 25-year-old Tugade has PBs of 11.92 and 24.31 also the Guam National Records. She is a graduate of the US Naval Academy Annapolis.

This week’s Track Beauty of the week is Regine Tugade of Guam. The Filipina athlete runs for the US dependency island nation.

Tugade has already represented her country in the World Juniors, Worlds, and Olympic Games.

Regine won the Micronesian Games, setting a new Games Record of 12.38 in June. Also winning the Long Jump and 400m.

Jan 14, 2020
Well Done to Regine Tugade for breaking the Guam National Record in the 60m Dash; she clocked a time of 7.62 at the Navy vs. Princeton dual meet in Annapolis on January 11 to break the 7.65 marks she set last year.
She won the 60 and 200 clockings 24.72, just outside her 24.46 national indoor marks.
Tugade has Filipino parents who migrated to Guam but ran for Guam, where she grew up. She is currently doing college at the United States Naval Academy.
She is an Olympian, having represented GUAM TRACK AND FIELD ASSOCIATION in the 100m at the Rio 2016 Olympic Games
a

Not only do I want to keep chipping away at Guam records, but I want to make my mark in my school and in our conference league as well.”

Always looking to excel and shave precious seconds off of her times, Tugade has set big goals.

“This upcoming season will be my second year running for Navy and my ninth year overall running in track,” said Tugade. “When I was first accepted into the Academy it was more of a shock and awe type of situation. Now I can say I’m so much more focused and extra driven to succeed as well as continue representing our island of Guam.”

Season opener over the holidays

Generally, Tugade can be seen back under the sun and perhaps on the beaches over the holidays. However, that wasn’t the case this past Christmas. Instead, Tugade and her Navy teammates took part in their team’s season opener. Tugade participated in the 60m, 200m, and long jump.

In the 60m sprint, Tugade ran in a field of more than 40 competitors and recorded an official 7.79 seconds in the final heat. Her time of under eight seconds secured her a top ten ranking.

“I want to continuously improve on my times as the season goes on,” said the Guam native. “I can’t say I’m not satisfied with the 60m performance, but I still have to remain hungry and keep working hard.”

Understanding that only one meeting has passed in the young season, Tugade knows the dedication, hard work, and discipline it will take to achieve her goals. One part of her path to success is improving her workouts and diets.

“I’ve been a lot more consistent in workouts, lifts, and diet,” said Tugade. “Last year, I was way over the weight and body fat I should have been at. Currently, I’ve gone down a good 14 pounds and a lot of that had to do with making healthier food choices and adding more variety.”

Making good choices and sound decisions are steering Guam’s former Olympian in the right direction and put her well on her way to accomplishing greater goals. “This upcoming season, I plan to break records, and I’m aiming to lower my current outdoor records by a substantial amount,” said Tugade.

Tugade also added that she would like to get some official indoor times and marks while setting records. “Not only do I want to keep chipping away at Guam records, but I want to make my mark in my school and our conference league as well,” said Tugade. “I’m aiming to make it to the all-time top performance lists for my school.” 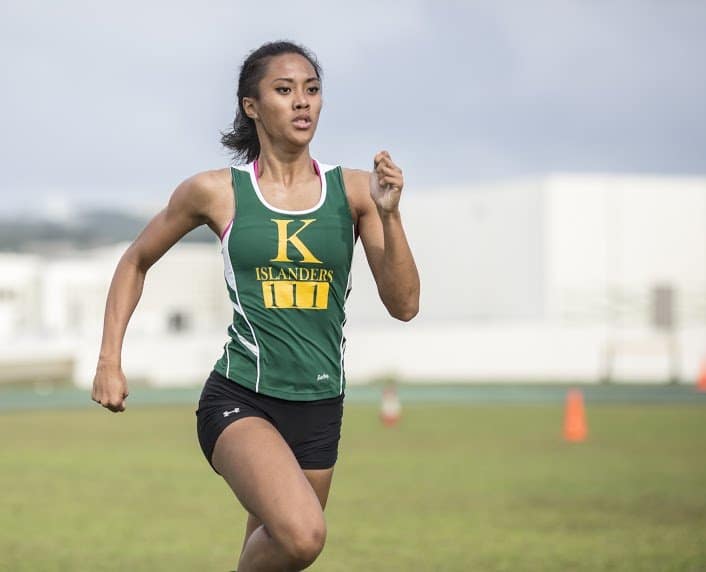 While the Philippines is settling for Eric Cray (400 Hurdles) and most probably Mary Joy Tabal (Marathon) for the 2016 Rio Olympics as their genuine qualifiers.

Its small neighbor Guam, a US Dependency with a large Filipino population, will field two wild cards.

Lustre recently won a gold medal in the 1,500-meter open at the Micronesian Championships.

He also won silver at the 2012 Oceania Championships in Australia in the men’s 1,600-meter relay, under-20 division, with teammates Nicolas Raval, Jordan Tingson, and Rey John Flores.

He remembered his trip in 2012 to Australia for the Oceania Championships with the national team and seeing teammates Amy Atkinson and Derek Mandell, who represented Guam at the London Olympics. It really inspired him to work hard and try for Rio.

“That goal has finally come into fruition,” Ilustre said.