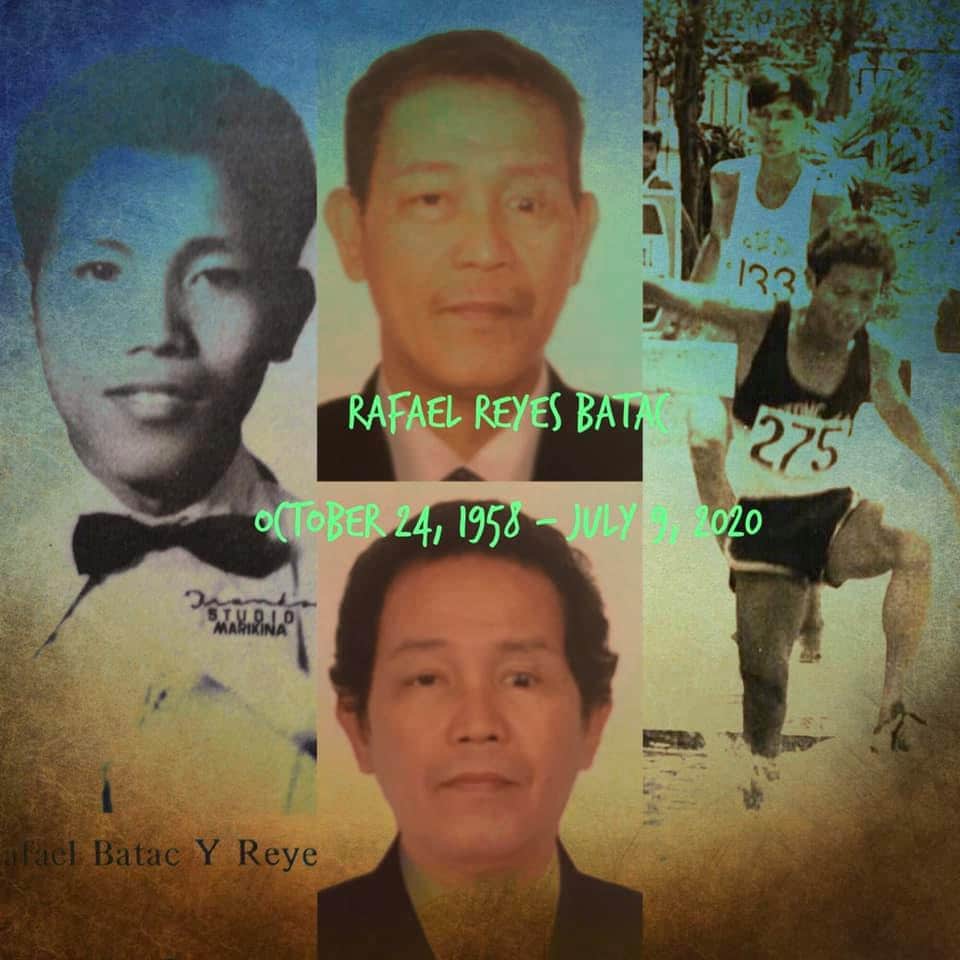 “He had been undergoing 6 years of dialysis,” Batac’s wife, Ruby, said in a Facebook private message.

Rachel, his daughter, said Rafael started complaining of abdominal pains and would vomit. After dialysis on Monday, Rafael was all right, but on Tuesday, he was bought to the emergency room, where his condition weakened despite dialysis on Wednesday.

A wake will be at St Peter’s Antipolo, and burial is set at Heaven’s Gate in Cogeo.

Batac, born in Lanao del Norte, was a strong pacer and worked hard during practice at the Gintong Alay training camp at Teacher’s Camp in Baguio.

He was one of the first athletes under the Gintong Alay Program to show how effective training was at high altitudes under former Olympian Tony Benson.

His ascent to the senior ranks was difficult as he faced the veterans led by Nestor Trampe and Justo Tabunda Jr, the Milo marathon champion.

“Competition was tough,” said Benson in a Facebook message.

Trampe remembers sticking close to Batac and waiting when he would unleash his kick.

“He was a pacer and a good one,” Trampe, who held the 3,000m steeplechase record before Hector Begeo came in 1981, said in a phone interview.

Tabunda recalls Batac as conscientious during practice and tenacious in competition.

“The long-distance pool was deep in talent. You had to go through a lot of opponents,” he said in a phone interview.

(NB. Irving Gallardo and Alberto Caoili are not in my records as having ever been SEA Games Champions).

Batac continued competing until the mid-1980s when he bowed out of the competition. At that time, another group of long-distance stars led by Begeo, Mario Castro, Wilfredo Ballester, and Primo Ramos was in the ascendant. –

(I have not heard of Ballester and Ramos neither won medals at SEA Games Level).

Ruben Daniel set the National record in 1980 when he beat Batac. So Batac must have held the record prior?

The National record was later bettered for Nestor Trampe in 1981 with 9:14.4 and eventually bulldozed down to 8:35.09 by Hector Begeo when he made the semi-finals at the 1988 Olympic Games in Seoul. Hector’s record has stood now for 32 years.