The Pole Vault has been an Olympic event for Men since 1896 and women since 2000. This article will examine the development and evolution of the Pole Vault.

Pole Jumping competitions were known to the ancient Greeks, Cretans, and Celts. And used it in warfare sieges to overcome obstacles such as enemy walls or vault onto animals such as bulls and horses. In contrast, poles were used as a practical means of passing over natural obstacles in marshy places. For instance, provinces of Friesland in the Netherlands, along with the North Sea, and the great level of the Fens across Cambridgeshire, Huntingdonshire, Lincolnshire, and Norfolk.

Besides, the artificial draining of these marshes created a network of open drains or canals intersecting each other. To cross these without getting wet, while avoiding tedious roundabout journeys over bridges, a stack of jumping poles was kept at every house and used for vaulting over the canals. Venetian gondoliers have traditionally used punting poles for moving to the shore from their boats.

In 1775 Poles were introduced into gymnastic competitions in Germany for a vertical event. One of the earliest pole vaulting competitions where and measured height took place at the Ulverston Football and Cricket Club, Lancashire, north of the sands (now Cumbria) in 1843.[2] The modern competition began around 1850 in Germany when pole vaulting was added to the Turner gymnastic clubs’ exercises by Johann C. F. GutsMuths and Friedrich L. Jahn.

And developed the modern pole vaulting technique in the United States at the end of the nineteenth century. In Great Britain, and first practiced it at the Caledonian Games.

Initially, vaulting poles were made from stiff materials such as bamboo or aluminum. The introduction of flexible vaulting poles made from composites such as fiberglass or carbon fiber allowed vaulters to achieve greater height.

Physical attributes such as speed, agility, and strength are essential to pole vaulting effectively. However, technical skill is an equally if not more important element. The pole vaulting object is to clear a bar or crossbar supported upon two uprights (standards) without knocking it down.

Evolution of the Poles

The athlete would climb the pole after he planted and jumped. And throughout the jump, the pole remained rigid and had essentially no bend.

In 1889 American vaulters banned the pole-climbing technique. And implemented the swing-up technique—an early version of the modern method, which added height to the vault.

Despite the advancement in technique, the hardwood poles were limited as they had no bend. As a result, the poles could not transfer horizontal motion into upward motion efficiently. As and lost a large amount of energy in the plant and vaulters were constrained to lower heights.

Around the same time that the swing-up method was introduced as the definitive technique in the vault. Bamboo poles began to replace the hardwood ones.

The swing-up necessitated a new type of pole that had some bend, and bamboo fulfilled that need. Also, the box was introduced into the plant stage. Previously vaulters had stuck the pole in the ground, which required the pole to have some bend as well.

And can see the swing-up technique in Fig. 6, where a vaulter uses one of these new poles to clear a height.

Bamboo poles were much lighter than the solid ash or hickory poles because bamboo is naturally hollow, which allowed for a faster approach. Additionally, these poles had a lesser degree of stiffness. And thus had a minor ability to bend when stressed. For these reasons, vaulters could carry more energy into the vault and convert more energy into an upward motion.

By 1942, the world record, set on a bamboo pole, was recorded at 4.77 meters [2]. However, the bamboo pole still presented limitations to achieving higher heights. The pole still did not bend enough to increase the efficiency of the vault significantly. And a large portion of energy was wasted once again on the plant. Additionally, bamboo is weaker (can take less stress/bending before breaking) than the hardwood poles used before and fiberglass poles. So vaulters could not put as much force into the poles, limiting the heights they could achieve.

As the heights increased, Bamboo poles gave way to Aluminum, which was tapered at each end.

While steel and aluminum poles made a brief appearance in the world of pole vaulting in the 1950s and 60s, the next major advancement in pole technology came in the form of fiberglass and carbon-fiber poles.

And can see Cross-sectioning these poles’ design in Fig. 7 shows the different layers that allow the fiberglass pole to be so versatile and effective. The poles were first introduced in the U.S. in 1956 and immediately impacted achievable heights, evidenced by the new world record set in 1961 at 4.83 meters [2].

With minor adjustments to the structure of the new poles and the addition of carbon-fiber layers, these poles have become significantly more efficient at transferring and converting the vaulter’s energy. Refinement of the swing-up technique has also augmented the fiberglass pole’s effectiveness, and vaulters can go higher with the same amount of energy put in.

Substantially stronger poles, lighter, more flexible, and more responsive than any other pole used before, have allowed pole vaulters to launch themselves to even greater heights.

Mats are growing larger in the area as well to minimize the risk of injury.

The proper landing technique is on the back or shoulders.

Landing on the feet should be avoided, eliminating the risk of injury to the lower extremities, particularly ankle sprains. Rule changes have resulted in larger landing areas and additional padding of all hard and unyielding surfaces over the years. 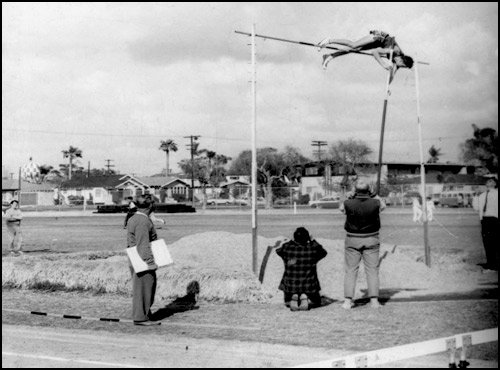 Who was the most influential figure in the history of Pole Vaulting?

It has to be Sergey Bubka from Ukraine

Despite the above, he is a classic example of the “Olympic curse” and won only one gold at the 1988 Olympics.