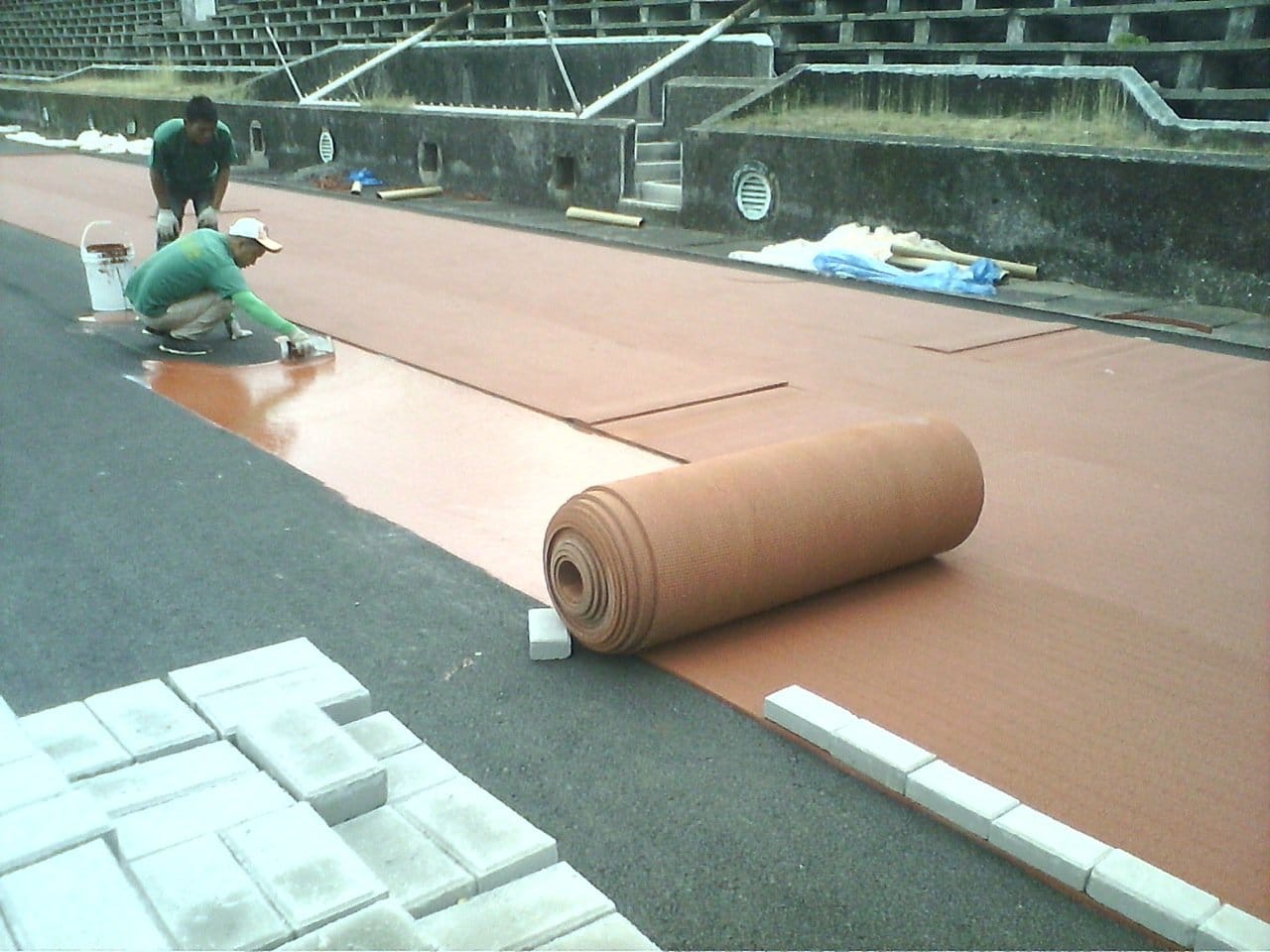 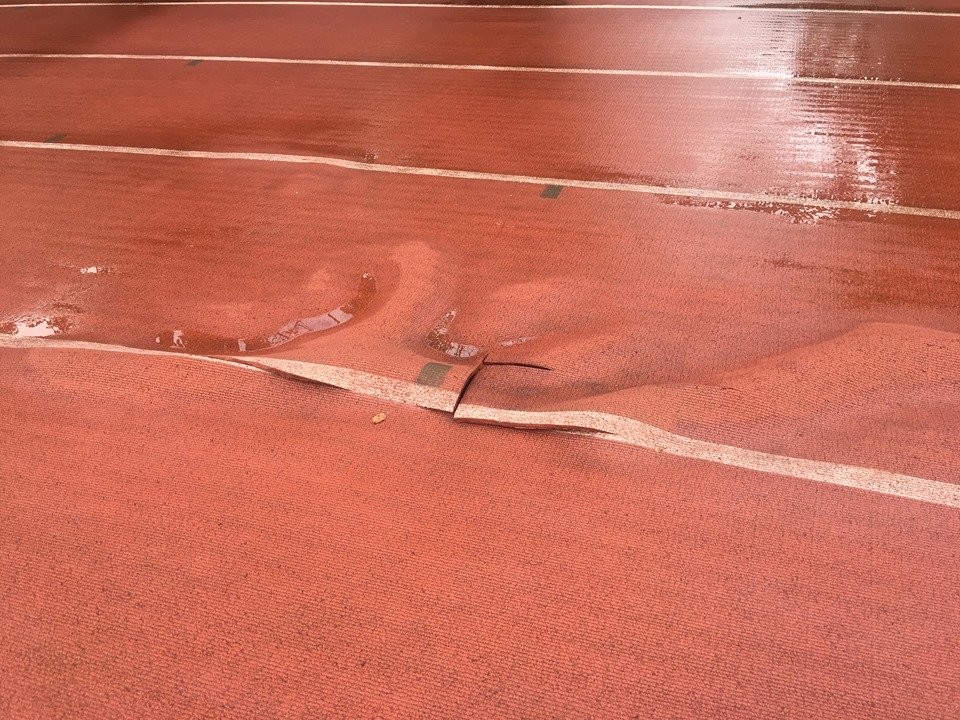 Having just been relaid in 2014-2015, PhilSports complex in Pasig outside Manila is quickly wearing out.

Due to the excessive foot traffic, it experiences countless joggers flooding the track from the busy working-class surrounding cities.

Ultra also accommodates nearly all sports in the national team. It also has around 100+ schools using the track oval.

The heavy usage of the track has led to the track wearing out very quickly. A friend sent these photos.

With concerns as it looks like Air Bubbles are appearing, the track is wearing out and eroding, and the track is coming unstuck to the track.

This presents a new set of challenges—especially safety hazards to athletes, including national athletes preparing for the 2017 SEA Games.

In the 2005 national walkathon, Melinda Manahan tripped over an air bubble near the 200m start on the track and broke her leg ending her SEA Games campaign.

We can observe a few things to preserve the track one is the correct use of Spike Nails.

Things like bicycles going over the track, cars, football studs should absolutely not be allowed as they really destroy the track oval quickly.

Alternatively, to alleviate the track’s use, other nearby tracks such as Rizal High School and the University of Makati must be utilized. A full list of Track Ovals in the Philippines can be found here.

With Renovation of Phil Sports well underway with the relaying of the new track surface. I want to revive this old article for the public’s information regarding incoming guidelines.

While the PSC has invested a lot into the construction and relaying of the well needed new surface at Phil Sports.

We want to preserve it. So it does not wear out quickly. And athletes will continue to have a good venue surface to train on.

This would also be implemented at the National Games.

Please read below. We would also appreciate feedback and comments on this article for further suggestions to help preserve and protect the track oval.

PhilSports is open to the public from 5.30 am to 9.00 pm Monday to Sunday (sometimes they have events there, and in which case it will be closed to the public and closed on public holidays).

The public can purchase tickets to use the oval. Pinoyathletics.info has also compiled a viral Full list of Track Ovals in the Philippines.

Advised sized spikes, so the Track oval is not damaged and wears out quickly:

PRIORITY FOR TRACK USE AT PHIL SPORTS

Common sense needs to be applied, and national coaches will need to instruct and direct the use of oval emphasizing track etiquette.

While on Saturday night, I had a very near run-in with a jogger. At the same time, I was doing 150s at the PhilippinesSports Complex (Ultra) at 16s/11s 100m pace.

Everyone hopped out of the lane. When we rounded the curve and came halfway down the strait, I notice one jogger who had earlier been told to clear the track by my friend had made his way back to lane 1 and 2 despite being told earlier to clear the lanes.

My friend had to ease down in the rep as the jogger was halfway between our lanes, I yelled track and lane 1 3 times, and my friend waved to him as he was wearing headphones.

He acted like he didn’t hear me when he was wearing his headphones. In fact, to my horror, he moved from the outside to the right in my lane.

I had to slam the breaks down at top speed and was very lucky I didn’t rip my hamstring.

Even though he claimed he didn’t hear me, “I didn’t know, I didn’t know,” he clearly could hear me when I started screaming and cursing bad language at him because I’m lucky I didn’t get injured.

After this, I filed an incident report to security.

The management at the track had not placed the fast lanes 1-4 and joggers stay in lane 5-8 lanes sign for some time. This has put the safety of the athletes highly at risk and Saturdays incident was a pure of example of what could happen as a result if instructions are not being followed.

Philsports Board with the Rules on it

Also, the board with the rules on it at Ultra tells the joggers, “stay in your designated lanes.” How are they supposed to know which lanes these are when management does not specify this?

I definitely expect the sign to be up there today when I head ultra; I will be really annoyed if it isn’t.

I have nothing against joggers using the oval they have as much a right to work out like everyone else.

However, safety must come first.

Furthermore, this is not only for the safety of the fast runners but also for the joggers’ safety.

Joggers, too, are trying to stay fit, but everybody safety should not be compromised because of this.

So when the signage goes back up, there is no excuse not to follow the rules. So I thought about why the joggers are assigned the outside lanes before, and this is why.

If the fast runners are assigned outside lanes, that means the joggers will have to walk past sprinters to get to their respective lanes because it’s much safer for faster runners to pass by joggers to get to the inside lanes.

Updates the Track Oval at Ultra is nearly complete and should be ready in time for the Philippine National Games May 17 to 22.

Furthermore provided are some more recent photos from our track friends.

While despite the delays caused by weather, Yolanda, etc., which forced work to stop as rain would cause damage if the track was worked on when the Track at Ultra is nearing completion.

The laying of the brand new rubber surface at Ultra has started. The rubber is not mondo, but it’s a better grade than the rubber used at other ovals in the Philippines.

The project is estimated to be completed in around 30-40 days.

Last year the PNG 2013 was held at Ultra, and the oval was so worn out and melting that it was not uncommon for shoes to become damaged and sink into the track rather than bounce off.

The PSC decided it was high time to give Ultra a well-needed makeover and then went about renovating the oval, which closed to the public near the middle of last year.

The difficult task of scraping the old excess rubber from the concrete to prevent the new surface’s rapid deterioration. It looks like a good surface in what will be a wonderful year for Athletics at the 2014 PNG. 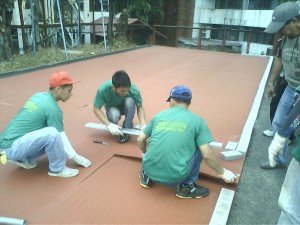 The renovation has begun on the Phil Sports Complex, popularly better known as (The Ultra) in Pasig.

The well-needed makeover started straight after the PNG overseen by the PSC began in June and will hopefully be finished near the end of the year in time for the UAAP Championships in Track and Field.

Ultra will be the first mondo track in the Philippines.

Advised sized spikes, so the Track oval is not damaged and wears out quickly: