ADDITIONS OR CORRECTIONS TO THESE RANKINGS. ANY ADDITIONS MUST BE ACCOMPANIED BY OFFICIAL RESULTS.

The Asian Cup and Interclub Championships 2017 in Weight Lifting was held at Yanggu, Korea. It was held from October 28 to November 2, 2017. I was only able to retrieve the results today they can be viewed here. 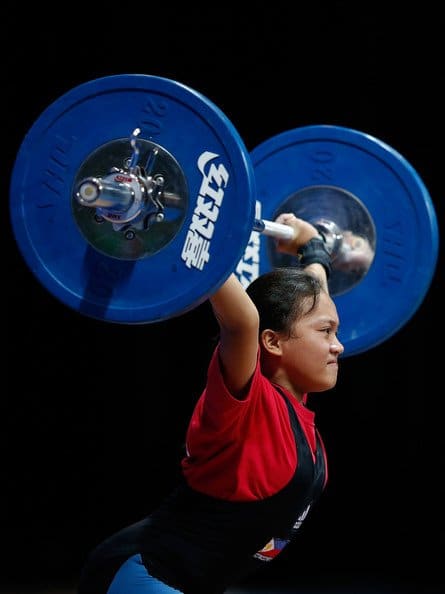 The 18-year-old athlete from Tagbilaran City topped the women’s 53kg category with a total lift of 158kg (71kg snatch and 87kg in clean and jerk) in the competition held at the Yongha Weightlifting Gymnasium.

“I’m so blessed and thankful because the Lord gave me the opportunity to compete in this tournament,” said Perez in an online interview on Monday.

Perez is one of five Filipinos carrying the national colors in the tournament sanctioned by the Asian Weightlifting Federation. The others are Mary Flor Diaz, Dessa Delos Santos, Elreen Ando and Margaret Colonia. The athletes are accompanied by coaches Ramon Solis and Allen Diaz.

Before the South Korea tournament, Perez has competed and won three bronze medals in the Senior, Youth, and Junior Asian Championship in Kathmandu, Nepal last July. 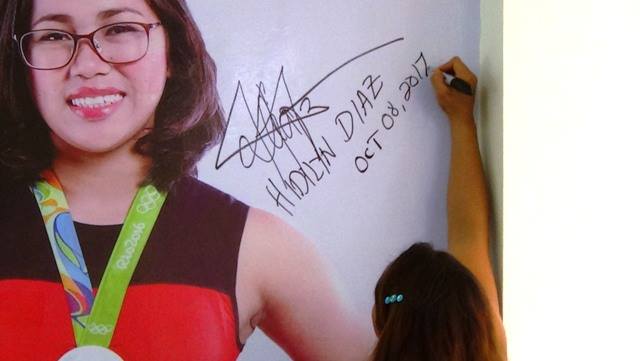 The equipment was donated by BPI, mat by MVP Foundation and solar power by Ruth Owen. Thank you Hidilyn for your generosity y Vaya con Dios! Diaz said the gym, where she used the bulk of the P5 million she received as incentives for her Olympic silver medal win, was inaugurated on Sunday.

While the gym can be used by fitness enthusiasts, Diaz said she will also use the 100 square-meter property to train kids who are aspiring weightlifters.

“May mga equipment na ‘yung gym for functional movement,” said Diaz, who also got support from the private sector in the construction of the gym.

Last weekend was my first time in Mampang where Hidilyn began her career in weightlifting. It was also the inaguaration of her weightlifting gym. Thank you for inviting me to speak and share my knowledge to the aspiring olympic coaches and weightlifters from Zamboanga. Mabuhay ka! – Jay Futalan Strength and Conditioning Coach

Summary by Go For Gold Philippines

The research results found that the factors leading to the success of the Thai weightlifters in the World Weightlifting Championships. And the Olympic Games consists of five factors.

Second, athlete management and preparation which includes empowering the association in order to increase the number of clubs, members, and athletes, athlete recruitment, training, practising, consideration of sending athletes to competitions, planning for competitions, and the welfare of athletes.

However, all these factors need cooperation and teamwork under the supervision of the board of the association via proper management.

In a country crazy with Basketball. Could we perhaps be overlooking one of our greatest assets? Filipino’s are built perfectly for the sport of weightlifting. Not only can we dominate at SEA Games, but we have also had success at Asian Level and higher international meets.

Olympic Silver Medalist Hidilyn Diaz came agonizingly close to the Fairy Tale Olympic Gold First medal for the Philippines. Pinoyathletics even predicted in 2015 she would win an Olympic medal despite the skepticism from some so-called armchair experts.

Well for Diaz this drove the girl from Zamboanga City to strive harder to do so. Consequently, Diaz story was dramatized in MMK. Working with several coaches, when she met up with PSC Strength and conditioning coach Jay Futalan her luck turned around. Hence Futalan fixed up several mechanical issues overlooked in her posture and she quickly leveled up to Asian Gold, World Bronze, and Olympic Silver within a year.

Furthermore, Diaz took  Silver in the Asian Indoors in the Women’s -53kg Category. 2013 World Champion Li Yajun of China who bombed out of the 2016 Olympic Games took the Gold. Yajun lift was 93kg in Snatch and 115kg in the Clean and Jerk for a combined total of 208kg. Diaz had 90 and 114kg total of 204kg for Silver. And home crowd athlete Kristina

Dessa Delos Santos is due to line up in the Women’s -58kg Category along with Kristel Macrohon -69kg Category.

The Philippines could have entered more athletes. Most noteworthy It had no entries in the Men’s. The 24-year-old pride of Zamboanga City recently captured the overall medal at the International Weightlifting World Championships held in Houston, Texas. Hidilyn took three bronzes in the Snatch, Clean and Jerk and overall.

Diaz lifted 96kg int he snatch and 117kg a total of 213kg in the clean and jerk in the women’s 53kg division behind Hsu Shu Ching of Taipei and Chen Xiaoting of China. Chen is the Olympic Champion and HSU the Olympic silver medalist in London 2012.

She was just 1 kilo off her 214kg total when she won the Asian Championships in Phuket.

Hidilyn teammate Colonia took bronze in the clean and jerk 158, but was fourth in the snatch with 124a total of 282kg and finished fourth overall.

=
According to the IWF Website guidelines, Qualification cannot be determined till June 16 when the rankings of the top 16 are available. The qualification rules are rather complex.

Unlike in athletics where they seem easy to follow only Eric Cray has qualified for Rio in the 2016 in any sport for the Philippines so far.

Cebu – Several meet records fell in Weightlifting at the 2015 Batang Pinoy. The interesting thing to note is that Bohol, Dasmarinas, and Cebu took away some records in a sport traditionally dominated by Zamboanga. Showing the good spread of grassroots Weightlifting into the province. Several records were not only surpassed but completely obliterated.

The most impressive record was done by Zamboanga/Mampang Rosegie Amis in the Girls 36kg category who added an amazing 40kg onto the existing record set last year by Paula Lanit of Manila. Her lift was 108kg above the 68kg record. Her Clean and Jerk itself was a 25kg improvement from 35 to 60kg. This has made the record almost untouchable.

Cebu’s Leonida Cambarijan (Cebu City A) improved the girls 40kg category record by 32kg, from 65kg to 97kg breaking the existing record of Geraldine Climaco of Zamboanga from last year.

Kateleen Diaz of Mampang took the third record in the girls 32kg, with a 77kg total, improving on the 68kg of Vanessa Sarno of Bohol set last year.

An emotional Colonia breaks down in tears after winning a title which no filipino man in his weight category has won before.

Colonia, the current Philippine record holder, seized the silver in the snatch before pocketing the gold medal in the clean and jerk for a total lift of 274kg to rule the 56kg category in the continental-level meet held in Phuket, Thailand.

“Lord God, thank you for these medals. Thank you also to coach Aldanete Alfonsito and Elbert Atilano for helping me when I’m down,” posted the 22-year-old on his Facebook account.

Colonia failed to medal in the Incheon Asian Games last year and slid from 62kg to a more comfortable weight category.

He more than made up this time with two golds and one silver after lifting 121kg in the snatch and 153kg in the clean and jerk to defeat his Thai and Vietnamese foes.

“This is history, the first gold medal in the Asian Seniors for the Philippines,” said Two-time Olympian Hidilyn Diaz, who is set to compete in the women’s -53kg of the 26th Women’s Asian Championships late Monday afternoon.

Though still off the 280kg Olympic qualifying standard, Colonia’s 274 total strengthened his bid for the 2016 Olympics in Rio de Janeiro.

According to coach Aldanete Alfonsito, his ward has been improving steadily since lifting a personal best 270 a few months back and setting the national record of 263 in the Philippine National Games two years ago in Dumaguete City.

For me, this must be the performance of the PNG. Nestor Colonia equalling the 2010 Asian Games mark in weight lifting. While this performance is a credible reward for all the hours of sacrifice put in by the hardest working man in Philippine Sports today.

Nestor Colonia qualifies for the Asian Games by matching the bronze performance of the last Asian Games.

Furthermore, Colonia would have won at least a silver at the last SEA Games. However, he was a few pounds overweight during the weigh-in for the 56kg category last year.

Results from the National Games