The situation of Philippine Sports

I believe in the idea of investing in long-term spo31rts planning and vision. Building grassroots and programs in provinces and decentralizing the system is of utmost priority. For example, hosting the 2019 SEA Games, which we are not ready for and may end up as a ‘Half Baked’ ‘Cockup.’

Besides, what happens to Philippine Sports after that. Small plans that lead to bigger plans later (grassroots and decentralization, and even dare I say it, Mequi and Juico PE in schools program) are better than quick fix gratification (hosting the 2019 SEA Games) not ready for.

Honestly, Tourism is the War on Drugs, and the Philippines’ conflict will increase tourism. Just from hosting a low-key international sports festival like the SEA Games???

Philippines Sports Commission 2019 15 Focus Sports!
October 17, 2019
PSC commissioner Ramon Fernandez is a staunch advocate of focus sports, disciplines where the Filipino athlete isn’t hamstrung by physical limitations like height and heft and can flourish on talent and hard work.
Upon his appointment in 2016, Fernandez crafted a blueprint called “Change the Game,” which seeks to resuscitate Philippine sports.
Among his plans was to focus on less popular sports where he believes the country has the potential to succeed, such as open water swimming — for the Olympic event, known as marathon swimming —
given the country’s vast water bodies.
https://opinion.inquirer.net/124625/two-golds-in-one-day?fbclid=IwAR1_efyj6CtcRktVVHQZrknZA2yOfw1-I2bRV2wqkzxLPghB7xGVHLfq9KU

After we got 24 golds, we are just brushing it off, and what have we learned moving to the 2018 ASIAN Games ???

We even appointed the same Chef De Mission Camacho. He predicted we would get 50 golds in the 2015 SEA Games, ending up with 29.

What’s happening, we are ending up struggling to keep the status quo. Rather than doing anything drastic or necessary reforms to stop us from falling even further behind are southeast Asian Rivals. In fact, in some sports, it’s now out of the question in the short term. And 2019 is the short term.

However, when are NSA leaders or sports leaders get bad results. They seem to think they deserve 2nd,3rd,4th,5th, 6th, and more chances than a Cat has lived. There needs to be accountability.

What’s more, with POC recruiting, Consultants and Expert coaches end up spending a lot of money on this and getting very little return on investment in most cases.

Meanwhile, buddy Jay Futalan a graduate of UP in Human Movement was outstanding; he was instrumental in leveling up Ms. Hidilyn Diaz to an Olympic silver through long-term planning and various fixes in her Biomechanics.

But does not get brought to SEA Games to help assist the athletes. But, at the same time, we bring all kinds of entourage people who have a paid holiday by the government.

Back to my point again, I will tie this all into planning for real change, reforms, and progress to happen.

And must first cleanse the system of those who are not getting results.

Should The Philippines Sports Commission take Control of the NSAs?

The proposed bill would place the NSAs under the control of the Philippines Sports Commission.

Under the present setup, NSAs are independent although subject to the supervisory and visitorial powers of the Philippines Sports Commission.

So what’s your insight? Do you think it would be better for NSAs to be under the Philippines Sports Commission’s control?

After an embarrassing 24 Golds at the 2017 SEA Games, the lowest % and the second-lowest number equal we have won in the countries 40-year participation in SEA Games. So what have we got to lose?

A gold medalist in the Indonesia Asian Games stands to receive a whopping P5 million after the Siklab Atleta Pilipinas Sports Foundation dangled P1 million to go with the P2-million incentive the government and another P2 million from the Philippine Olympic Committee (POC).

Philippine Sports Commission (PSC) chairman William “Butch,” Ramirez said that Davao tycoon Dennis Uy, the Presidential Adviser on Sports, has pledged P1 million for a gold medal in the Asian Games formally gets going today in Jakarta-Palembang. Under Uy’s scheme, the silver medalist gets P500,000 and the bronze medalist P250,000.

“We want to help fuel the country’s dream of global recognition in sports,” said Uy in a statement.

Obtained from SEC Last Week PATAFA Bylaws as of February 2015 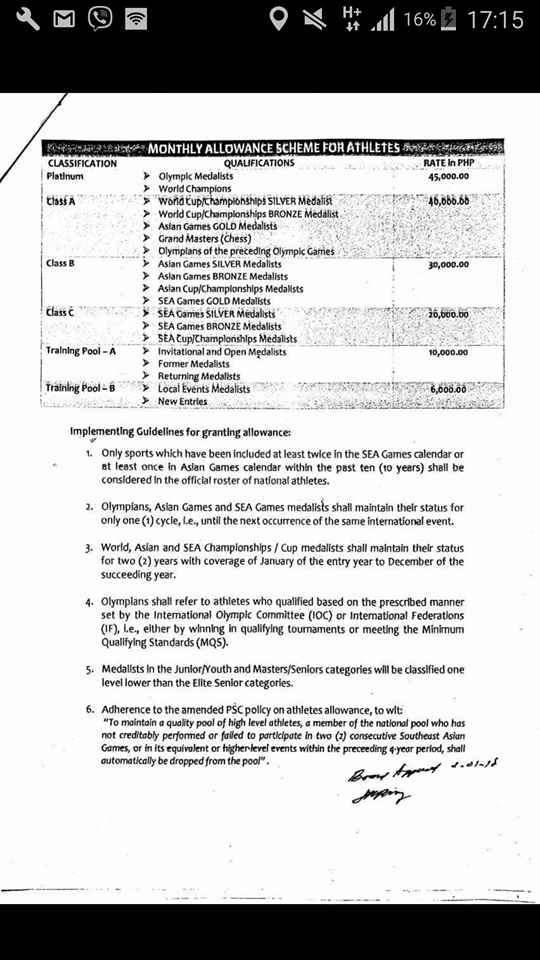 “We’re considering that (increase of allowance) but first we have to review,” he said.

“We only had 24 gold medals from the SEA Games, why maintain more than 900 (athletes)? We found out that of almost 1,000 athletes, those under the ‘priority athlete’ classification are only less than a hundred.

Then out of 600 coaches, there are only 60 ‘priority’. So we’re trying to review. Maybe the reason we’re not winning is we only have a few Top A athletes, a few Top A coaches. So why retain so many in the training pool?” he said.

Ramirez reiterated that reviewing the list and making a clear policy on which athletes and coaches deserve allowances from the Philippines Sports Commission will rid the influence-peddling system.

“We found out that some athletes are there because they’re related to this individual. By crafting policies, we can avoid that,” he said.

A source advised the qualification in measurable sports for Asian Games, held in August 2018. Is either GOLD or SILVER MEDALIST in the 2017 SEA Games

Winds of Change Blow Hard in POC as Court of Appeals back POC Elections, Hontiveros Resigns as PBF Leader.

It is only natural that people’s wishes and aspirations should be realised by the leaders of the region. As this wind of change blows, it is up to the leaders to seize this opportunity to look for the better future for their own people through bold reforms before it is too late, before the people are forced to take action.

In light of 6 Karatedo athletes coming forward and missing allowances being investigated. The Philippines Sports Commission has made further calls for complete transparency, advising athletes not to be afraid to report any anomalies regarding their respective NSAs.  This is very good for the country.

TO: ATHLETES AND COACHES

RE: FEAR NO MORE

Above all, tell them President Duterte, thru the Philippines Sports Commission, will be at their side if they are on the right side, that Congress created PSC to provide their needs: dormitory, meal allowances, monthly allowances, local and foreign training, uniforms, cash incentives and Security of safety And harassment.

Athletes, don’t be afraid of the People of the Philippines thru the Office of the President via

PSC will Fight for your rights.

Chairman Butch Ramirez and the Philippines Sports Commission BOARD.

Philippines Sports Commission shall protect the athletes at all times and all costs. We will sustain this investigation and stop corruption in Philippine sports.

Would you please submit our documents and information of athletes with no fear of losing their slot to the RP Team? We will use government power to correct this abuse of power by individuals against our athletes.