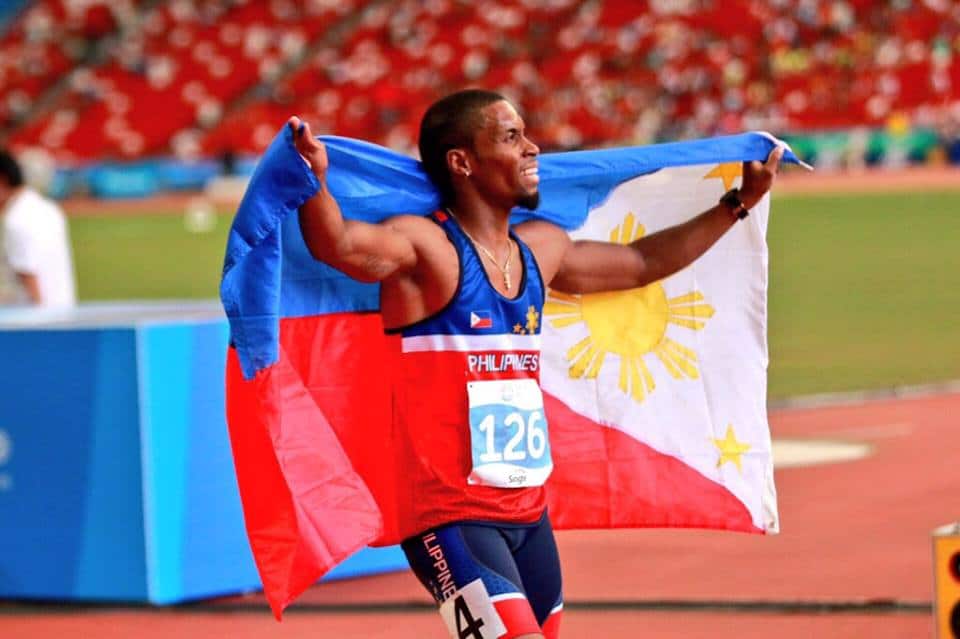 I will particularly focus on the South East Asian athletes participating. As this is part of theanalysis towards the 2017 SEA Games in Singapore next month. I have done an article on EJ Obiena Bronze and the 2 other Filipino athletes on day 1.

Muhammad Irfan grabbed the silver for Malaysia with a 60.96m heave, although not his best it was a good result for the Big Malaysian who should easily defend his SEA Games title next month. Ehsan Hadidi of Iran won his 5th Asian title in the Discus in 64.54m.

In the Women’s 100m 5 SEA women advanced to the Semis. With the absence of The Philippines, Indonesia, and Vietnam in this event. Zulkifili and Mohammad of Malaysia (11.79 & 11.88), Wanakit and Chattha of Thailand (12.07) and a big PB by Wendy Enn of Singapore (11.98) to advance to the Semis. Former Asian Junior Champion Duttee Chand of India had the fastest time in the heats in 11.40.

I continue with my pre-games prediction Jantan will time 10.20, in the semis or finals. And he may even get on the podium. While Femi will probably win here. A lot of top sprinters from China (9.99 guys) , Japan (10.0 men), and the Korean who ran 10.07 who have qualified for worlds 10.12. I have chosen to give this meet a miss. While those still trying to qualify are participating.

Its unclear if there will be 2 semi-finals or 3 semi-finals. Due to the number of heats maybe 3, but due to fewer entries maybe 2 the same as the women’s. 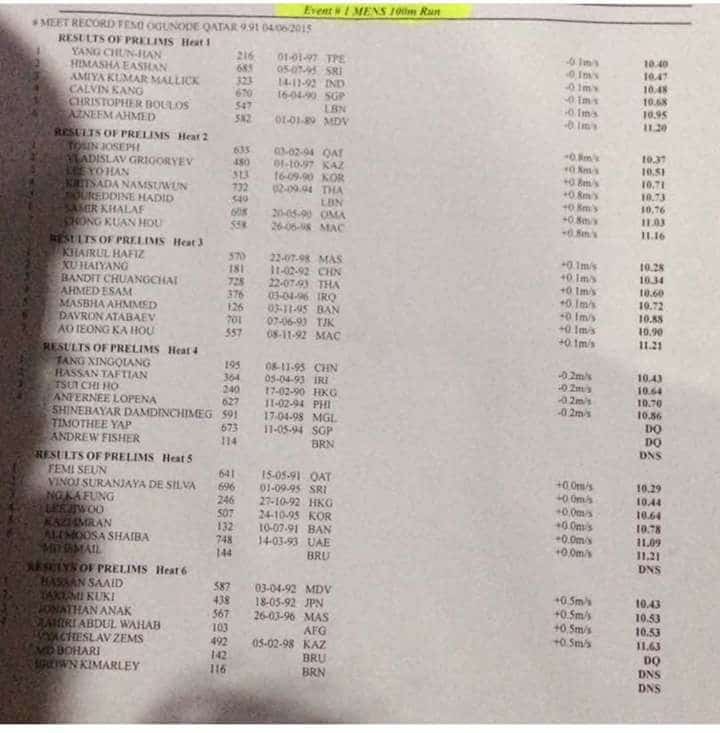 Quach Cong Lich the Vietnamese Arnold Schwarzenegger who is mentored by one of the world’s greatest ever coaches Loren Seagrave ran sensibly to get third in his 400 heat in 46.79. All Three South East Asian athletes entered advanced to the Semi-Finals including Badrul Hisyam Manap (Mas) who is better known as a 100m runner (10.29 best time) but improved his 400 PB from 47.60 to 47.46. Azam (Mas) also moved through in 49.04.

There was drama in the Semi-Finals with Semi Heat 1 kicking off at 9.35 pm on July 6. The timer had malfunctioned leaving the winner and several other participants with a 44.00 time well below the Asian Record. However, the officials scheduled a re-run at 9.10 am the following morning on July 7 as the performances weren’t allowed as it made it difficult to know for sure who had qualified for finals.

This decision makes it easier for someone from Semi 2 from these four to pounce on the win as the first Semi is disadvantaged having to run an extra race before finals. Why backup hand times were not used is a good question? but the decision of the officials is final and must be respected.

Cong sister Quach Thi Lan (Vie) qualified for the 400m Women’s Final in 53.16, behind 3 Indian women. The SEA Games silver medalist who ran 52.96 at the Asian Grand Prix. The Two Thai athletes were well under their best times with 56 and 57 runs and both failed to advance to the next round.

The second report, following from Day 1. Again the Focus is more on SEA Athletes in preparation for SEA Games 2017.

Singkhon is the Iron Man of Asia

Thailand’s Suttisak Singkhon won the Gold in the Decathlon with a New PB and extended his 2017 SEA lead further with 7732pts. His previous was 7587 points at the Thai Open last month. His meteoric rise continues as he was only fifth with around 6600 points 2 years ago at the 2015 SEA Games in Singapore. The mark eclipsed his own National Record.

Singkhon will focus on the SEA Games as he failed to make the 8100 points required for the World Championships in August at the same time as SEA Games almost.

It was Hassan Taftian of Iran who caused the major upset at the 2017 Asian Champs. The 2016 60m Indoor Asian Champion clocked 10.25. He pipped defending Champion Femi Ogunode of Qatar. Ogunode the Nigerian born Asian record holder clocked 10.26 for Silver. The surprise was Yang Chun-Han of Taipei who took third in 10.31. 19-year-old Malaysian Khairul Jantan who had clocked the fastest time in the semis with 10.24. Was disqualified for movement in the blocks. Jantan performances see him as a strong candidate in the Men’s 100m next month at the SEA Games.

Silver Medalist Tassaporn Wanakit bombed out of the semis with a 12.47 run.

Quach Thi Lan of Vietnam 2015 SEA Games silver medalist, took silver in the 400 in 52.78. A 2017 leading time for southeast Asia. Nirmla of India won in 52.01 following a great tradition of Indian quarter milers in this event.

Indian Muhammad Anas took the gold in 45.77. Due to a re-run demanded of Semi Heat 1 due to alleged timing problems. Anas actually ended up running 4 times in the 400, whereas a lot of the other finalists only had run 3 times. Anas win was the first gold for India at the Championships since 1975.

Thailand’s line up was Kritsada Namsuwan, Jirapong Meenapra, Bandit Chuangchai, and Jaran Sathoengram. With some of their stronger athletes being rested, they have a while to cut their time down for SEA Games. Thailand won the 2015 SEA Games in 38.24.

In the 110 Hurdles, none of the SEA Athletes made it through to the Finals. Ryzan Shah Sofian clocked 14.03 well below his 13.67 National Record set earlier this year. It was Rio Maholtra who clocked 14.08 closely behind to set a New Indonesian National Record. Patrick Unso of the Philippines was down as DNS.

This year Malaysia, The Philippines, Indonesia, Laos, and Singapore have all broken their country’s national records in 110 Hurdles.

Many times SEA Games Champion Lee Hup Wei of Malaysia settled for fourth in the high jump in 2.20m. While in the  Women’s Triple Jump his teammate Nadia Noor placed last in 12.39m.

Thailand 4×400 came in third in 3:06.48, with Phosri and 3 back up runners. There are other members Kunanon (46.00 SEA Games Champion), Chimdee and Pleenram where rested. Still, Thailand took bronze behind India (expected as 3 of the 4 top placers) and Sri Lanka. Thailand with a full-strength team narrowly won the SEA Games in 3:06.81. They had run 3.11.14 in the morning. This gives Thailand the two fastest times in SEA this year in this event.