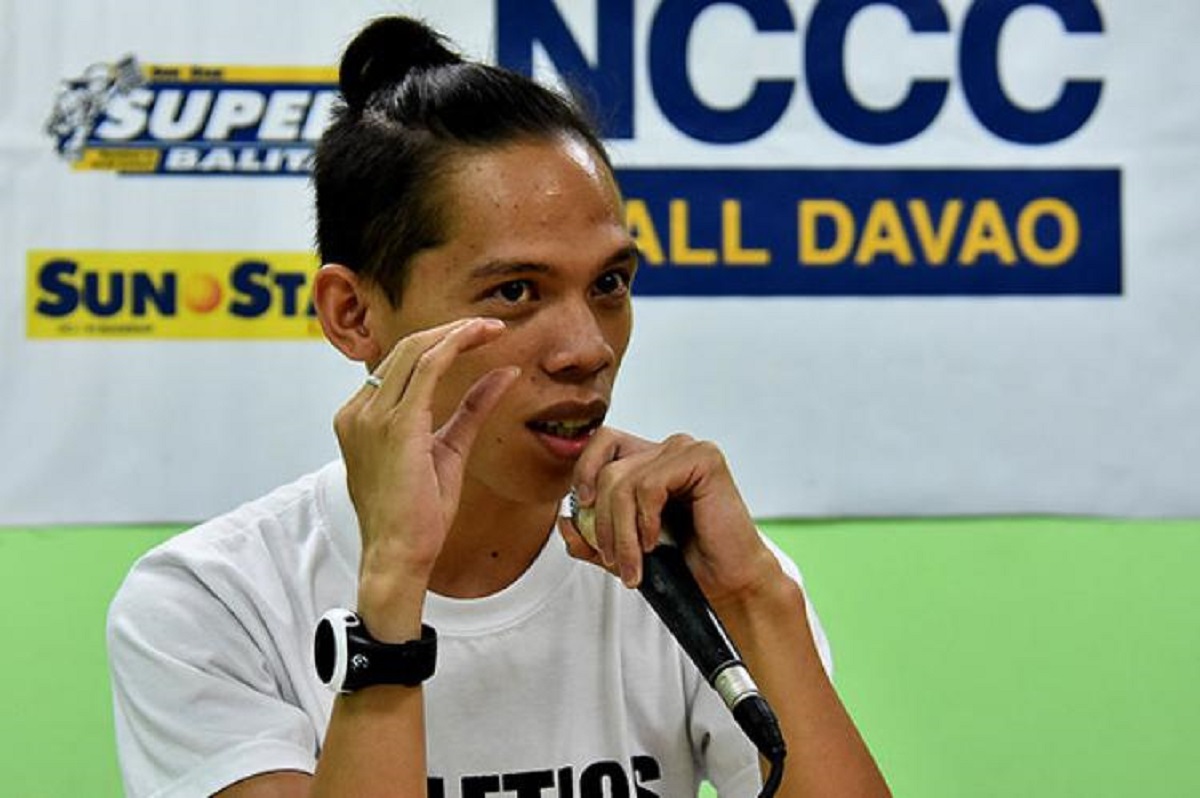 The 2021 Philippines National 3000m Championships, a Virtual event,  came to a dramatic close on Sunday, February 21. Organized by Jason Operio and the Iloilo Athletic Community and assisted by Enzo Williams of Pinoy athletics. The 3000m Virtual Competition, which had 76 competitors, ran from February 19 to 21.

Braza Helps himself to his first national senior title.

Alfrence Braza of Iloilo, the Palarong Pambansa 1500m Record Holder at just 19 years of age, won his first Senior Philippines National title. Braza clocked 8:51- a personal best for the 3000-meter event on the road, to beat a field of 46 competitors from all over the Philippines. On Friday, Braza had clocked 8:59.68 at the Iloilo Sports Complex Track Oval in a four-person race.

Braza, the rising star of  Philippine Men’s Long Distance running this year, had won the 10,000m BBGHPH and 5000m Pinoyathletics / Talking Chinoy virtual event and was runner up in the 1000m Pinoyathletics / Fantasia event a few weeks ago. Braza is a WIT student in Iloilo, part of the PRISAA, coached by Ellie Navarro and Noel Diel. He declined offers from UAAP and NCAA Colleges because he wanted to stay home to support the family business.

Equally amazing in the Women’s was Lany Cardona-Adaog of Team Titus, the champion and most improved athlete at the Pinoyathletics / Talking Chinoy 5000m event.  It may have seemed like a lifetime ago. Still, Lany Cardona, 12 years ago at the Philippines Athletics National Championships in 2009 in Lingayen, won the Junior 3000m title in 11:19​.32 (her PB up until today). At the time, beating future Philippine Steeplechase record holder Jessa Mangsat in that race.

Not your conventional runner and not blessed with substantial speed reserves, the well-developed endurance honed by her coach Saturnino Salazar (coach Titus) and well-judged race pace distribution paid off, overcoming her much younger, faster rivals.

The Runners up in the Mens Division. 2019 Philippines NCAA 800 and 1500 Champion Ed Carlou Sabellon took 2nd place in 8:57. Initially, from Misamis Oriental, he is studying at JRU.

The event also saw some talent emerge in rising juniors. Third place went to MG Malaguena, just 18 years of age from Bago City. He clocked 9:03 on a dirt track.  The National Junior Record is held by Hector Begeo, who ran 8:44.1 to win the 1983 ASEAN School Games 1983. Maldeguia mark is the fastest time by a Junior Athlete since 1983 and 4th on the all-time list.

His teammate, just 16 years of age, John Mark Matrir, clocked 9:17 for fourth. Both Matrir and Malaguena are coached by Reginald, a native of Bago City who currently lives and works in Singapore.  He is coaching three athletes from Bago City over the internet with a specific periodized program.

It is important to note that UAAP 800 and 1500 Record Holder Elbren Neri, a former national team member, clocked 8:53 on Saturday at Tangub City Oval in a solo run effort. Unfortunately, as he is the only one authorized to use the oval, so had no way to provide any video. As a full video must accompany the competition, Neri opted to run again on Sunday on the road. But by this point, he was already tired and clocked 9:34, finishing 7th overall in the event. As 3000m is not Neri’s primary specialty, it shows he has decent endurance based on the 800m and 1500m performances. 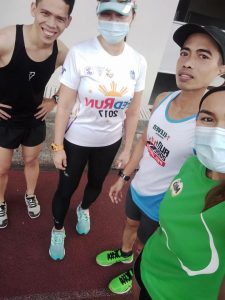 Showing why he is a People’s Champion and not just competing for himself was SEA Games 2019 5000m Bronze Medalist Sony Wagdos. Unfortunately, due to Air Force duties and lack of training because of COVID. Wagdos finished 10th overall in this event, winning his first race back in 9:42.

More importantly, he showed a strong sense of community, helping pull three junior athletes through new personal bests at Binan Track Oval. As a result, Sony and his coach have pledged to join more virtual races to sharpen up performances leading to SEA Games 2021.

Finishing 2nd behind Lany as she did during the 5000M PA/Talking Chinoy event was 39-year-old Nhea Ann Barcena. A four-time Milo Half Marathon Champion, who still holds the 1500m Record at the UAAP. Barcena clocked at 11:04.

and set, all in all, a lot of personal bests at what was a very successful event.  73 of the 76 entries completed the event. Smiles all around as several athletes broke their personal bests. Iloilo Athletic Community and Pinoyathletics would like to thank all participants and supporters for supporting the event and their intense love for keeping the sport of athletics alive despite the pandemic.

Organized by the Athletic Community of Iloilo.

While the Philippine National Championships in Athletics has been moved to the 3rd Quarter of 2021, Probably September.

46 Men and 30 Women will be competing

Who will Crown themselves the Philippines National Champions of 2021 in the 3000m?

Another question is, will any of the runners at this meet get close to ‘tickling’? The National Record in the Men’s is 8:17.4, held by the Great Eduardo ‘Bertek’ Buenavista.

Leading the entries in the Men’s is SEA Games Bronze Medalist in the 5000m Sony Wagdos. Wagdos improved from a virtual nobody to SEA Games Champion and his PB from 15:15 to 14:34 to claim a surprise medal at the SEA Games in New Clark. Is coming back into training with the Philippine Airforce. He is the only current national athlete to join this event. And it’s his way of giving back to the Athletic Community by mingling with the provincial athletes and respecting his roots as a grass-root athlete that came through the PRISAA, having been a graduate of the University of Mindanao in Davao City. This is why Sony Wagdos, the protege of the late great Master Endurance ‘Rafael Poliquit,’ is a ‘Peoples Champion.

The 26-year-old will face a challenge from one of the rising stars of the Philippines Mens Long Distance Running, Alfrence Braza, a student at WIT. Braza, still 19 years old, is the Palarong Pambansa 1500 and 5000m Champion from 2019 (the last time the Palaro was held due to the COVID). But that did not mean the Ilongo Teenager has not made the most of the Virtual Circuit. On the contrary, he had a busy January winning the BBGPH Run 10,000m title and then the 5000m Pinoyathletics / Talking Chinoy title. Then, he finished runner up in the Pinoyathletics Fantasia 1000m.

And helping A. Braza out will be his fellow Ilongo Edgar Carado, another younger at 20 years of age. Carado, who studies at Adamson University, is the UAAP Junior MVP from 2018. He also is the 2019 National Junior Champion in 800 and 1500. Carado, fresh off a fast dry run test a few days ago, will travel 1 and a half hours to Iloilo to race against Braza at the Iloilo Sports Complex with some other athletes. The event will be live-streamed via Pinoyathletics. Carado is also a handy runner and one of only two runners who has a 400 PB under 50 seconds.

While in the women’s, it’s a wide-open affair aswell. At the same time, there doesn’t seem to be anyone with speed to get close to the long-standing national record of Marietta T. Magno (9:48.5) in the 3000m, which has stood for 31 years.

UAAP Multiple Medalist Maria Lyka Sarmiento with a PB of 10:45 is the next fastest.  With her training partner, Analyn Monoy of Earist College, the Adamson graduate will be racing on Sunday in Aklan.

The lineup is Lany Cardona Adaog (Team Titus), the PA/Talking Chinoy 5000M Champion and most improved athlete. While Lany fares better at the longer events, she is a strategic runner who could pull a surprise.

The youngster, Janice Nemi from the CANTAFA, finished 2nd in the 1000m PA Fantasia virtual meet.

*NB Philippines 3000 Meter National Virtual Championships is in no way, shape, or form associated with PATAFA or the PSC

Breaking News -‘ The You Just Run’ event of Jason Operio and The Iloilo Running Community has been rebranded as the
‘Philippines 3000 meter National Virtual Championships’
Pinoyathletics will bestow this event’s winners the title of 3000m national champions of the Philippines in all its future writeups.
22 Men and 19 Women have entered the event so far, vying for the national men’s and women’s titles. With entries closing on February 16.
Entry is 150 PHP with Prizes for 1st, 2nd, and 3rd up for grabs.

3rd P1,000.00
The top 3 winners will receive a cash prize and E-certificate on 21 February 2021 after verifying winners.
Stay safe and enjoy. Observe the proper health and safety protocols.
For more wonderful Running events on the Pinoyathletics Calendar of Events for 2021.
PLEASE SHARE THIS ARTICLE
LIKE OUR NEW FACEBOOK PAGE
Alex Pastor