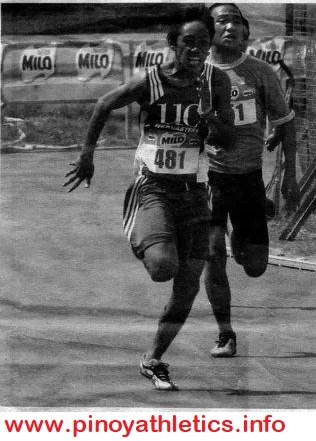 I will first be dealing with the Tertiary level Men’s Records.  It is important to note a few things here.

The BPISAA (Bureau of Public Interscholastic Athletics Association) a previous incarnation of the Department of Education started there Games in 1948 and this became the Palarong Pambansa in 1974.

Due to the even scarce availability of data for these early meets I only have a snippet from a secondary source for the 1960 Games and due to the different nature of the games (was mainly an open and collegiate meet even at times serving as a National Championship meet).

I will exclude the BPISAA results and begin with the Palaro Records in 1974. Although when I am next in the Philippines I would like to pursue a compilation of BPISAA results which may prove to be a bit of a treasure hunt.

While this was due to the fact that the DepEd board changed the rules, the last games in 1983 and prior allowed National level athletes to participate (such as Elma Muros and Lydia De Vega) who made the national team at the age of 14 and 15 for the SEA Games which meant they were also young enough to play High School level at Palaro.

And from 1988 onwards athletes of this caliber where no longer allowed to participate at the Palaro. While for my listing purposes, all Palaro results from 1974 onwards will be included in these lists.

Also to note is that some records were tied and reported as broken with only one holder. While considering ties for co-record holders in the events listed.

Due to somewhat limited data, these lists may be due for amendment

While the first list is going to deal with Tertiary Men. Please note that CHED is also running by DEPED so this is considered the Tertiary portion of the Palaro, sometimes they are combined. Considering any open age athletes when they had an open age division for these Tertiary records. As date of Birth is not important for open age due to it being ‘open age’ I have not been so particular on dates of Birth.