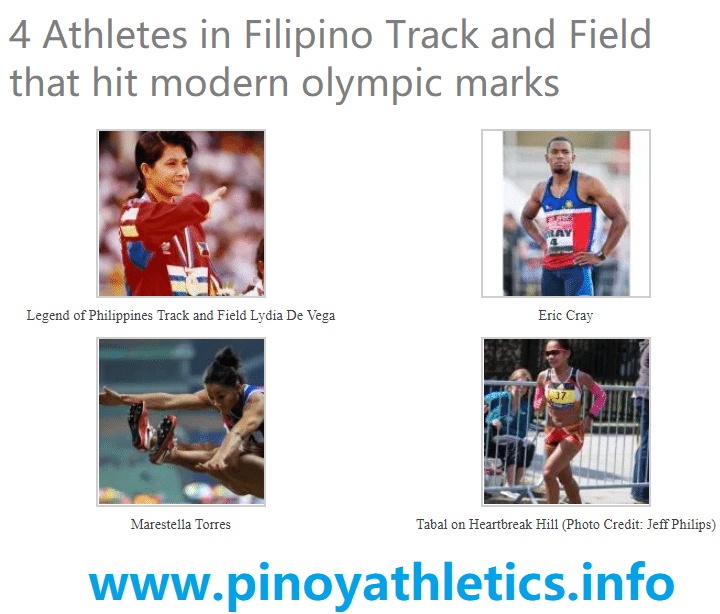 NB. This article is now out of date as Ernest Obiena has qualified and Olympic standards have increased. The marks are of the 2016 Olympic Games Standards.

As they have now done away with the B-Standard. This list has to be thoroughly revised.

4 Filipino Track and Field athletes on this list. In 2016 Eric Cray and Mary Joy Tabal hit the Olympic standards. Marestella Torres also qualified again. Isidro Del Prado, whose time of 45.57 won him Asian Titles, is now off the list with the new standard of 45.40. His time was good enough until 2012 to still qualify for the Olympic Games. It’s no secret that the Philippines has fallen greatly behind other countries on the international stage, particularly the Olympics. As time goes on, this trend continues to unfold, with our best athletes falling further and further behind the elusive Olympic Gold Medal.

The Philippines has won 2 medals in track and field. But the last medal was outside present memory almost 80 years ago. They came in 1932 from High Jumper Simeon Toribio and 1936 from 400 Hurdler Miguel White.

The number of Olympians in Athletics has been declining to the point where we now rely on token entries, apart from Marestella recently, who qualified.

The First time the Philippines played in the Olympics was in 1924. As we were new to the Olympic movement, the only Olympian was sprinter David Nepomuceno in the 100m and 200m dash. This increased to two in 1928 with Toribeo and Sprinter Anselmo Gonzaga.

Below are the Olympic standards from the 2016 Rio Olympics.

Only four athletes in Filipino Track and Field have made the current Olympic games’ current standards.

She is the only athlete to achieve a modern A Standard with her best time and still a national record of 11.28; this was achieved in 1987, some 27 years ago, and is still good to make it to semi-finals in the current day and age.

On the other hand, he has achieved the qualifying standard for the 2016 Olympics in the 400 Hurdles three times. In 2012 we can say, De Vega, Del Prado, and Torres would have qualified. In 2016 it was De Vega, Torres, and Cray. As the standards are increasing faster than our level of performance, we even have to scour the history of athletics in the Philippines books to draw up an interesting article.

When the Olympic standard was lowered from 2h42 to 2h45 for the Women’s Marathon, Mary Joy Tabal got the target running 2h43 at the Scotia Bank, which saw her make it to the Olympics despite having just been the SEA Games silver medalist leading up to this.

Let me start by asking, scroll down, and look at these standards? Of the Philippines’s current track athletes, who are most likely to qualify for the 2020 Tokyo Olympics? Perhaps www.pinoyathletcs.info will cover this next time.

Feel free to comment and share our article, and of course, bookmark our site for future reference.

How Many Filipinos qualify for Rio 2016?

How many athletes are going to qualify for the 2016 Rio Olympics from the Philippines?

The Question comes in light of the headlines in the Manila Bulletin, Tribune, and Inquirer. And other leading newspapers. So I will tease the media people with my insight here.

As the Philippines has very few qualifiers which are surprising as it’s a country of 101 million (as of 2015). I will also cover other sports.

As of now, only SEA Games 400 Hurdle Record Holder Cray is definitely qualified. In Swimming, Chloe Kennedy Isleta has surpassed the Olympic B Standard in the 400 Individual Medley; however, the meet may not have been an Olympic qualifying meet. Weightlifting 2013

Important to note Cray and Isleta are both Fil-Heritage athletes and Hidilyn Diaz comes via local programs. However, Cray has participated in the 2013 and 2014 Philippine National Games held in Pasig.

Other Athletes in Athletics

According to the news, PATAFA has had plans to include 8 athletes in total (presumably Cray). In their hopes for Olympic Qualification with the deadlines listed at the bottom of an article.

In the Men’s SEA Games, Silver medalist 20-year-old Ernest Obiena. Who will need to bring his PB from 5.30 to 5.70 and is currently undergoing training in Italy?

Athletics will run from August 12 to 21 in Rio.

Olympic Standards change and updates for the Philippines

 NOCs with no male or female qualified athlete or relay team will be allowed to enter their best male athlete and their best female athlete in one athletic event each, except the Combined Events, 10,000m and 3000m Steeplechase.

 This applies equally to unqualified female entries from a NOC with qualified males,
and vice versa.

 Acceptance of unqualified entries in Field Events and Road Events will be at the discretion of the IAAF Technical Delegates, based on the technical standard of the athlete and the numbers of qualified athletes in the respective event. To allow the IAAF Technical Delegates to assess the technical level of such athletes, and must submit a specific application form indicating the event in which the entry is requested and the proof of the technical level and international participation of the nominated athlete to the IAAF. The IAAF shall subsequently confirm, in writing to NOCs, with a copy to the Rio 2016 Sports Entries Department, the approval or otherwise of the entry of the specified athlete(s).

 The application forms of all unqualified athletes must be submitted by NOCs to the IAAF no later than 4 July 2016.

What this all means 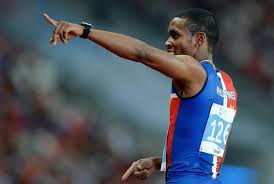 In Men’s, the next most likely candidate is Ernest John Obiena in Pole Vault; he improved from 5.00m to 5.45m in 2015 and, having just turned 20, is a relatively young vaulter who doesn’t reach their prime until they hit their 30s. EJ’s success was greatly due to his and his father/coach Emerson’s trip to train with Coach Vitaly in Italy, the former coach of Sergey Bubkha. He is currently training in Poland to hit the required 5.70m to qualify for the Olympic games.

One Woman is allowed for Filipino Track and Field. 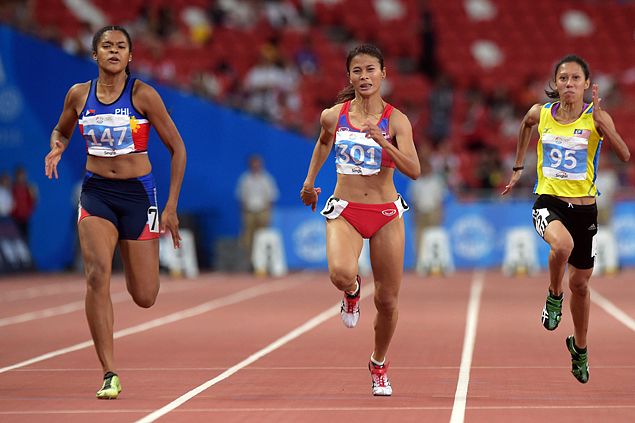 As per the IAAF highlighted in red. We are allowed one wild card woman if no women qualify.

In the Women’s, the strongest candidate is Kayla Anise Richardson in the 200m Dash 23.67s in the SEA Games heats, with the standard at 23.20. The following reasons put Kayla ahead.

The next strongest candidate is Mary Joy Tabal, who benefits from the Olympic Standard being dropped from 2h43 to 2h45. Tabal clocked 2h48.16 at the Milo Marathon, and she will have one more race in March to prepare for qualification.

Jumpers Marestella Torres (PB 6.71 2011) and Katherine Khay Santos (who is training in the United States) are chasing the 6.70m mark. At the SEA Games, Torres, who returned to the sport after giving birth, leaped 6.41m, and Santos tied her personal best with 6.40m for third and fourth.

As the cut-off for the Olympics is July 11, it is still possible that any of the above women listed or even some who are outside chances, such as Jessica Lyn Barnard (Steeples), could move beyond or closest to the standard.

Who has hit IAAF Standards for Philippines Athletics in the Olympic Games since 2000?

In conclusion, in the last 6 Olympic Games, the Philippines has had 4 athletes who made it past the IAAF qualifying standards, not as wildcards in Athletics. Gabito, Torres, Cray, and Tabal. Data wasn’t available pre-2000. IAAF Standards for Philippines Athletics. In the History of sports in the Philippines since 2000, these are some examples. 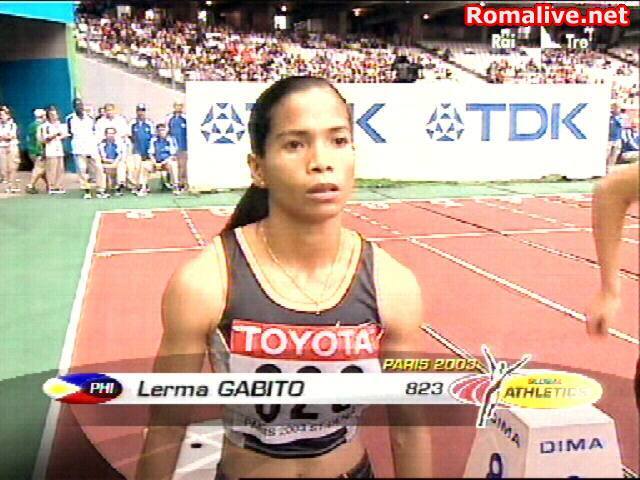 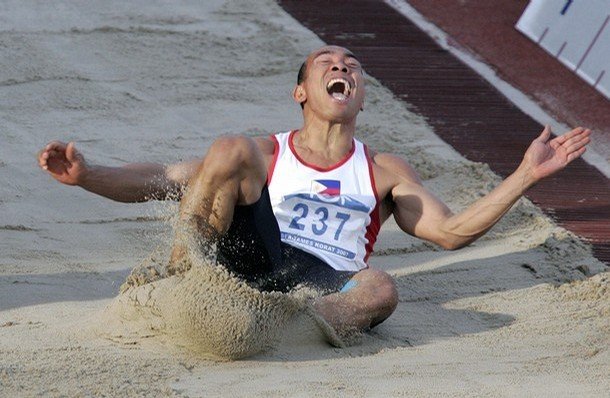 Henry Dagmil of the Philippines reacts during the Men’s Long Jump final at the SEA Games in Nakhon Ratchasima on December 10, 2007. Dagmil won the gold medal. REUTERS/Zainal Abd Halim (THAILAND) 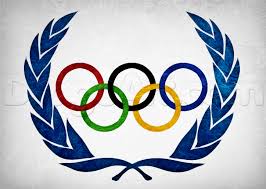