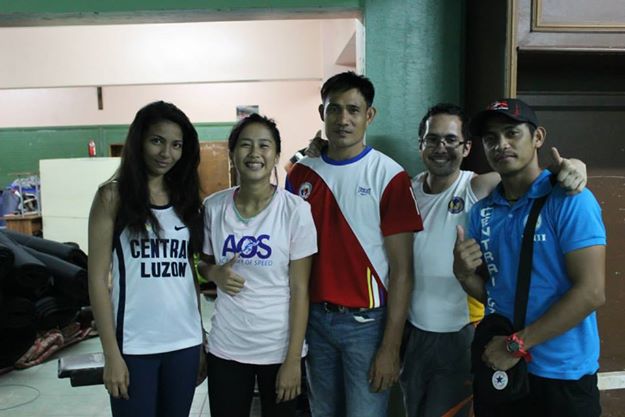 Accompanied by PATAFA National Sprint Coach Ernie Candelario. We took what ended up as more than a scenic tour on the way to Olongapo to conduct The Olongopo Athletics Clinic.

We eventually arrived at Olongapo City and were greeted by our hosts, who I used to run against at the National Games. And Miss Olongapo turned sprinter Karissa ‘Anne Aliarte’ Lopez aka. El Negra.

It was a scorching hot day, and we ended up at a track that I later realized I had been to before on a summer outing with the Obiena family, which was on the way to Subic. (I told you, Karissa, I have been there before :P).

The six-lane track looked in much better condition than the decrepit Rizal memorial coliseum oval.

We were introduced to Coach Mike’s athletes, around 20-30 kids, mainly in high school. But also featured Karissa and her bestie Angel Redira who were constantly running around and laughing at photos of each other taken on the camera.

Coach Ernie got to work teaching them drills as the kids had already done an earlier workout.

He went through the sprint drills with them; some picked up on them quickly, although it took a few attempts, while others needed more training.

We then gave them several tips on diet, core activation, etc. I was armed with the stopwatch as coach Ernie instructed the 800m runners-up to do 2 x 2 200m with 30-second rest in between, around 6 mins between the set. One boy at San Sebastian who happens to live up there finished first on all the reps.

After a workout and some picture-taking with the athletes, it was time to head to the gym. At last, I saw the world-famous ‘TETANUS Leg Press.’ Anyway, we have to improvise as the gym lacked crucial equipment and was under renovation.

It was surprising how quickly Karissa, Angel, and one thrower learned the Power Clean and the Deadlift. On the first attempt, they were leaning forward and using their back to lift. But once I had advised them to put their feet under the bar and look straight under the mirror, they had a near-perfect technique.

Besides, the thrower boy just needed to learn how to shrug and pull at the same time rather than a shrug, pause, and pull. I think these kids could learn faster as they never really did the lifts and did not pick up any bad habits to unlearn.

Coach Ernie also taught them step-ups and other mobility exercises in the gym.

After that, Coach Mike, Coach Ernie, Myself, Karissa, and Angel went to have lunch; we brought Pizza ‘Garden Special’. As coach Ernie can’t eat meat cause of his gout, it was time for the long trip home. I also got quite badly sunburnt being up there the whole day.

So in hindsight, what can we sum up from this trip me and Coach Ernie had made it at our own expense to assist Olongapo athletes and their coach Mike. So in conclusion, well, here are some collected thoughts.

However, the need to hold maybe perhaps a dual meeting with Bulacan State. Or another school or bring in a rotational series of Regional Weekly  Weekly Relays they can share with Nueva Ecija, Bulacan, and other tracks in the area.

We also plan to visit more regions when we have time. And return at some stage to Olongapo to see how the athletes are going. We left them with some knowledge and a program and will check up on them from time to time. But the trip was more about a technology transfer to Coach Mike to help him better train his athletes, not a trip in which we are trying to take over the athletes.

We also agreed to allow Karissa Lopez, who we felt was the more promising PNG 200m Silver medalist athlete, to join the Philippine Airforce Squad for the National Champs.