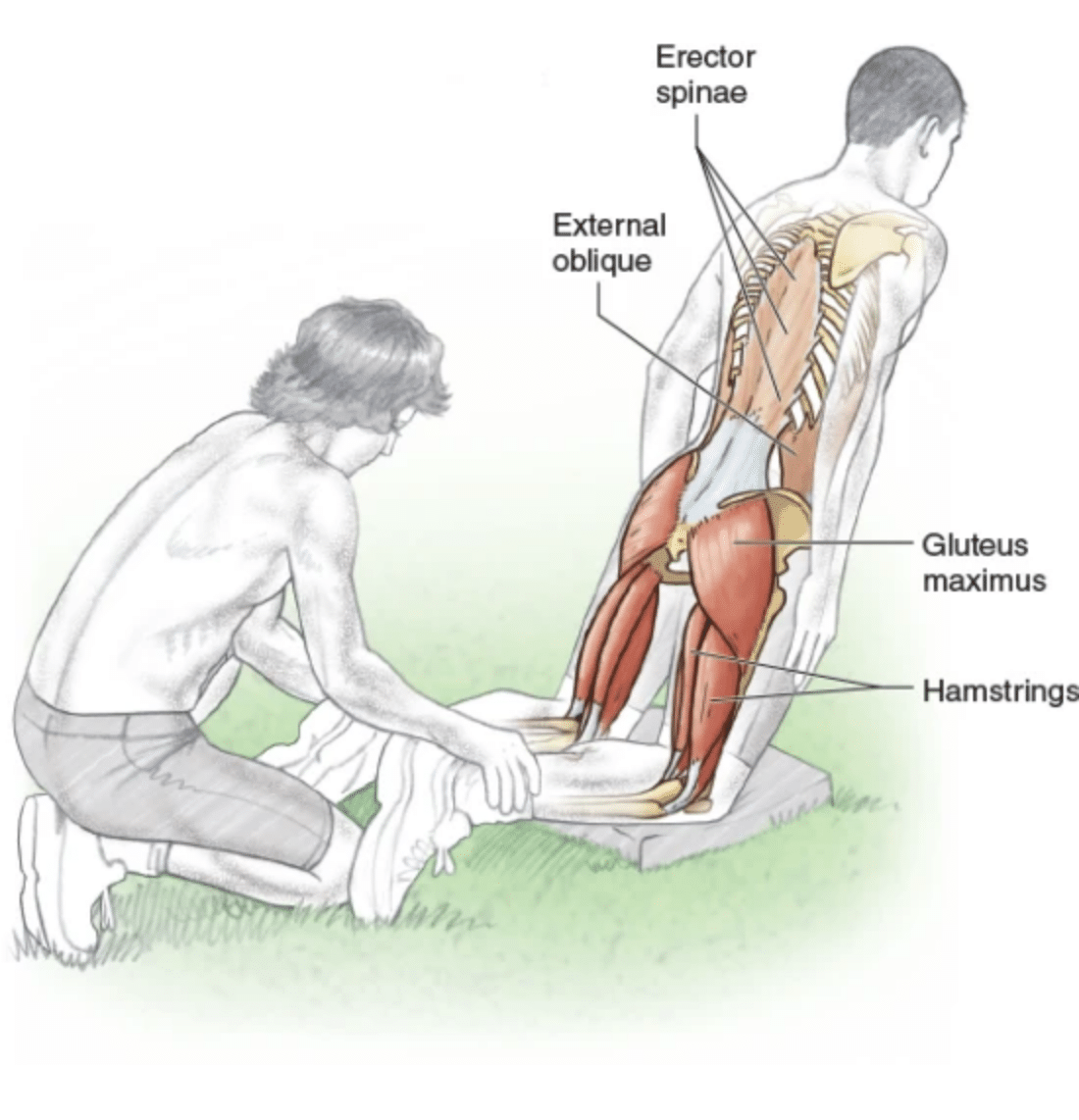 How to do the Nordic Hamstring Curl?

The Nordic hamstring curl involves kneeling on a pad (for knee comfort) and lowering under control. Simultaneously, the ankles are held in place by a partner, a loaded barbell, or any other immovable object.

The movement should be slow and controlled.

It would help if you came as forward or low to the floor as you can without using your hands/arms. Only put your hands out in front of you on the floor when you can no longer rely on your legs. Then push yourself back up to the starting position and repeat.

If you are not ready to perform the full Nordic Hamstring Curl, you can use a resistance band to execute this exercise variation. This will allow you to build strength and progress to the full movement. Attach a resistance band to the immovable machine behind you, above your head. Put the other end of the band over your head and hold it near your shoulders. The band will allow you to descend slowly toward the ground.

Are Nordic hamstring curls bad for your knees?

No exercise is ‘bad for your knees’; it’s just a matter of loading and volume.

If you want to do Nordic hamstring curls, build them up by starting with heavy assistance from a resistance band (low load) and doing a few reps and a few sets (low volume). See how you feel, increase either the volume or the load, and repeat the process over time.

You can put cushioning under your knees if that position is painful for you.

Not really, unless you have some existing knee condition.

I advise you to work your way into them the same way as you would do with a pull-up:

1: Inclines nordic curls by using a fitness ball to limit the range of motion,
2: full negatives (push yourself back up explosively with your arms, but lower as far as you can.)

As you get stronger, you will be able to control a larger ROM and a slower speed.

Why is the nordic hamstring curl considered an injury prevention exercise, but the leg extension is not?

I think you may mean ‘reverse nordic curl’ as opposed to the nordic hamstring curl?

Given that the reverse nordic curl trains the same muscles that the leg extension would?

The nordic hamstring curl trains an entirely different muscle group, so it’s really not that comparable to the leg extension.

The nordic (hamstring is implied) curl is an eccentrically focused training exercise for the hamstrings. Some research suggests that its periodic use in strength & conditioning reduces the incidence of a hamstring injury. Hamstring injury is a widespread injury in most mixed sports.

It’s not a far reach to assume that the periodic use of the reverse nordic curl, and by extension, the leg extension (you can create decent eccentric stress with 2 up 1 down) would have at least a similar injury-lowering effect on the rectus femoris.

That being said, we probably see far few rectus femoris injuries on the whole. The hamstrings are a fusiform, fast-twitch, high activation muscle group that gets used more at top speeds than rec fem.

I see no reason why the leg extension couldn’t use a similar capacity to either nordic curl variation. Assuming the loading was realistic.

I think the leg extension got demonized in the early-to-mid 2000s for knee stress, and since then, people have gotten more and more anti-machine. I think, if anything, it was abused.

It’s also an expensive machine with limited utility (it does one thing) that takes up considerable gym space. If I can get a similar training effect with the reverse nordic, with minimal equipment, that’s more cost and space-effective.

The Effect of Nordic Hamstring Exercise Intervention Volume on Eccentric Strength and Muscle Architecture Adaptations: A Systematic Review and Meta-analyses

Although the Nordic hamstring exercise (NHE) performance has been shown to elicit adaptations that may reduce hamstring strain injury (HSI) risk and occurrence, compliance in NHE interventions in professional soccer teams is low despite a high occurrence of HSI in soccer.

A possible reason for low compliance is the high dosages prescribed within the recommended interventions. This review aimed to investigate the effect of NHE-training volume on eccentric hamstring strength and biceps femoris fascicle length adaptations.

A literature search was conducted using the SPORTDiscus, Ovid, and PubMed databases.

A total of 293 studies were identified before the application of the following inclusion criteria:

(1) a minimum of 4 weeks of NHE training was completed;

(2) mean ± standard deviation (SD) pre-and post-intervention were provided for the measured variables to allow for secondary analysis; and

(3) biceps femoris muscle architecture was measured, which resulted in 13 studies identified for further analysis. The TESTEX criteria were used to assess the quality of studies with the risk of bias assessment assessed using a fail-safe N (Rosenthal method). The consistency of studies was analyzed using I2 as a test of heterogeneity. Secondary analysis of studies included Hedges’ g effect sizes for strength and muscle architecture variables to provide comparison within studies; between-study differences were estimated using a random-effects model.

A range of scores (3–11 out of 15) from the TESTEX criteria was reported, showing variation in study quality. A ‘low risk of bias’ was observed in the randomized controlled trials included, with no study bias shown for both strength or architecture (N = 250 and 663, respectively; p < 0.001). Study consistency was moderate to high for strength (I2 = 62.49%) and muscle architecture (I2 = 88.03%). Within-study differences showed that following interventions of ≥ 6 weeks, huge positive effect sizes were seen in eccentric strength following both high volume (g = 2.12) and low volume (g = 2.28) NHE interventions.

These findings suggest that lower volumes of NHE may be more appropriate for athletes to increase intervention compliance, potentially reducing the risk of HSI.