Life was no easy feat for this humble gardener turned national athlete and now coach and CEO. Benigno ‘Ninoy’ B. Marayag used to run five kilometers to-and-from school and hide from the rest of the school kids to catch his breath.

Coach Ninoy did not start as a jumper. He first tried his luck in athletics as a long-distance running and 400-meter hurdles in high school until he made it to the 2002 Palarong Pambansa in Naga City. UP Athletics Head Coach Pedro Subido spotted him with his participation in such an athletic event.

It was the first time that this Tuguegarao-born dreamer had his eyes on what Manila could offer to his future. Since the 2003 Palarong Pambansa was canceled due to Lanao del Norte’s unfortunate circumstances, Ninoy reached out to Coach Subido but was advised to postpone his collegiate life a vacancy in the Athletics team opens. 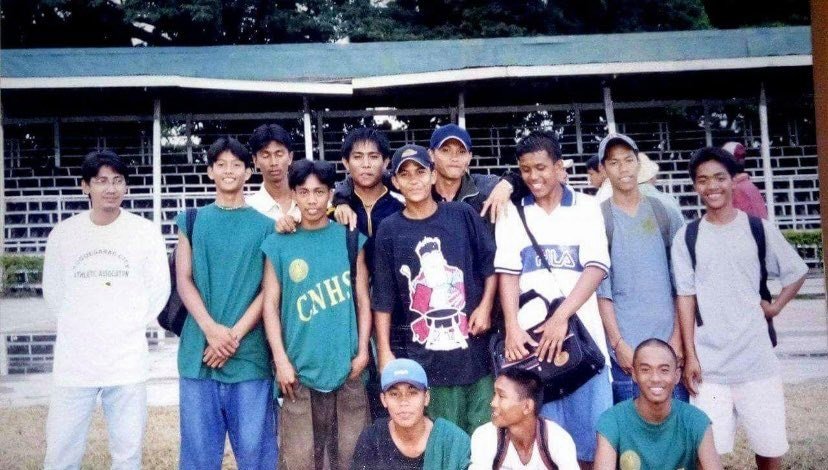 Ninoy is thankful to his teammate and friend Dario Santos, a bronze medalist in the 2002 Palarong Pambansa, for introducing him to jumping events. This coach considers himself a late bloomer as his career as a jumper barely began at the end of his senior year in high school and just months before he started college.

While offers from various UAAP schools came to Ninoy, he chose to be part of the University of Santo Tomas Track and Field team when he saw a tarpaulin outside the University while bannering its championship win. To his mind, belonging to the UAAP will present him with more opportunities and a much higher level of competition, which was more than at par with the Palaro.

He was then granted an interview with Track and Field coach Francis Oliveros. In the interview, he took a risk telling Oliveros he was a jumper and not a hurdler. He advised Oliveros that he jumped 13.93m at the Regional CAVRAA meet when in reality, his jump was only at 12.93m. Nonetheless, this tactic worked as he persevered, and in a short time, exceeded his imaginary 13.93m as within a month, he leaped 14.21m.

“I already told Coach that I was a meter than I already was because I didn’t want to embarrass myself by not jumping what I had claimed totally. I went back to the province and trained thrice a day. Plyometrics, jumping stairs, and hurdle hops were my training back home in the province while I waited for UST answer.”

Besides this, he also watched many YouTube videos of world-class athletes, including that of Jonathan Edwards’, a world record holder from England.

UST really answered prayer as he hit two birds in one stone — finishing school while also being an athlete. As he focused and improved on being a triple jumper, he balanced it. He enrolled in the program Bachelor of Secondary Education major in Music, Arts, Physical Education, and Health.

UAAP Rookie of the Year and First International Exposure

The following year, he won in the UAAP with his 14.57m leaps in the Triple Jump, and then National Jumps Coach, Joseph Sy, recommended him to the National Team. He declined the offer as he wanted to focus on his studies. For his efforts, Ninoy was the recipient of the prestigious UAAP Rookie of the Year Award in 2004.

That year, Ninoy went to the ASEAN School Games in Thammasat, Thailand, with UST Coach Edna Punelas and finished with bronze in the Boys Triple Jump. 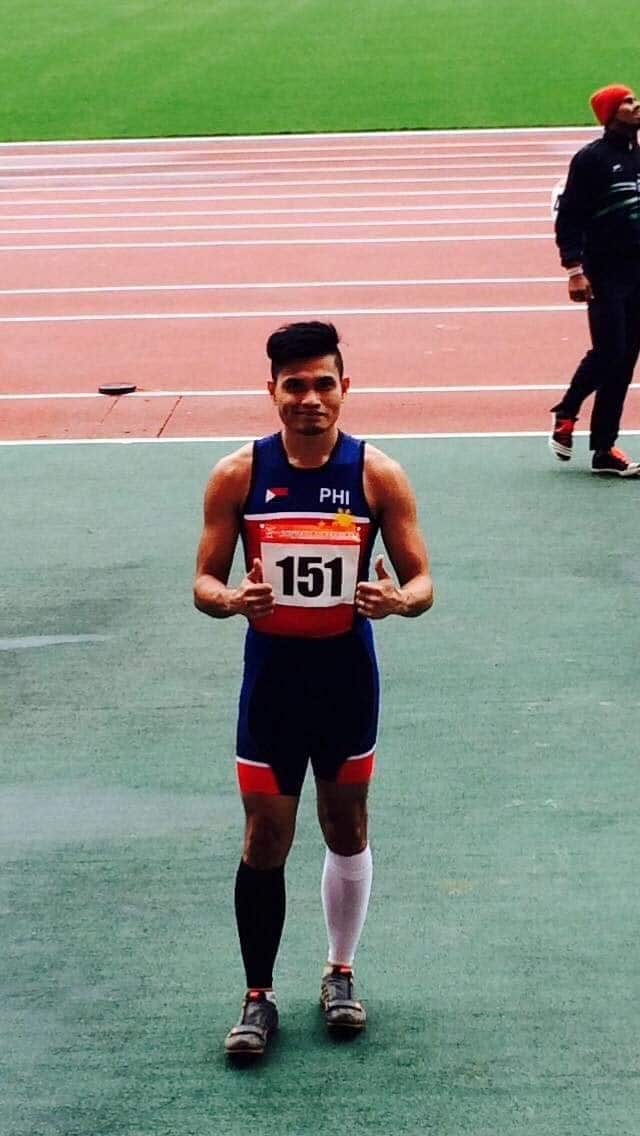 In 2005, Ninoy was offered another chance to join the National Training Pool by veteran coach Noel George ‘Jojo’ Posadas. Again, Ninoy advised Coach Jojo that his concern was his studies. Jojo convinced Ninoy that he can still focus on his studies and be on the team. Ninoy signed the contract in May of that year and joined the training pool. Marayag continued his winning form leaping 14.90m to win the Junior Division at the Philippines National Open.

That same year, the SEA Games was hosted by the Philippines and was held in Manila. We selected a maximum of two athletes for the SEA Games in each event. Joebert Delicano, the Philippine record holder and national champion who had taken silver at the last SEA Games, was automatically given one spot. So, the coaches now decided between Marayag and Esmeraldo Pachecho, the NCAA Record holder. The coaches chose Pachecho.

As lucky as he is, Marayag won his first national title in the 2006 National Games in Nueva Ecija, beating both Delicano and Pachecho with a 15.31m jump. 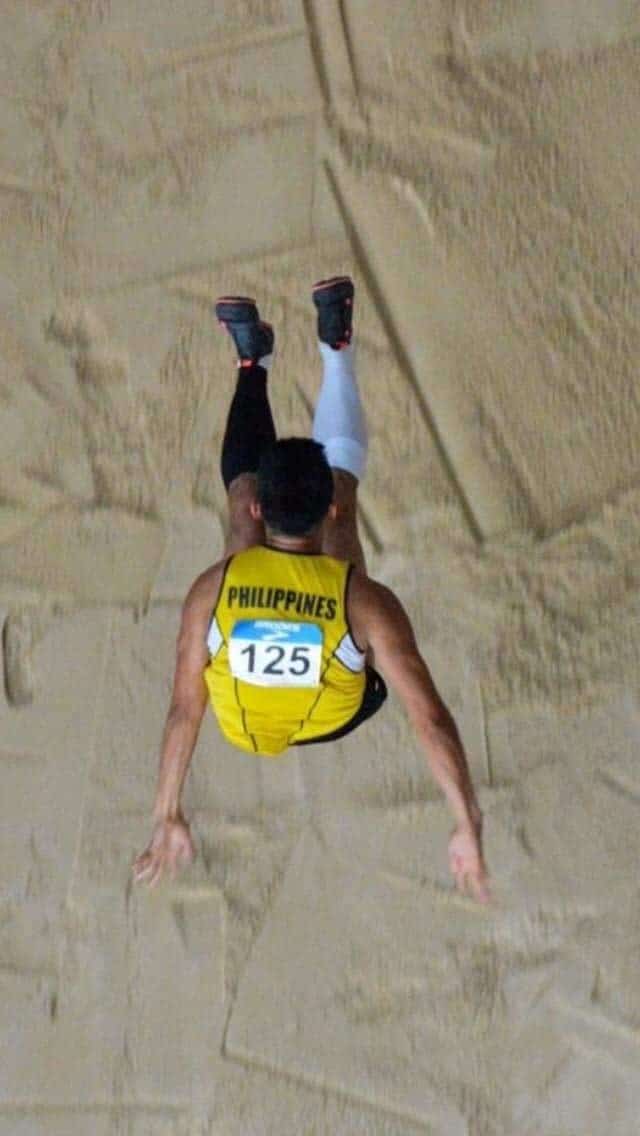 The following year, 2007, he leaped to a new national record of 15.96m at the National Team Trials in Baguio City. This record broke Joebert Delicano’s 15.92m mark.

He also joined his first-ever SEA Games in 2007 but was unsuccessful with all his jumps registering as fouls.

Unfortunately, Ninoy had a Peroneal Tendinitis injury at the Sri Lankan National Open. He was then advised that he needed to rest for about three years. This, surely, came as a shock to the thriving athlete. His attending physician, Dr. Molo, then said that he was at high risk of tearing his Achilles tendon if he didn’t rest and would need surgery if that happened. Ninoy took that as a sign he needed to focus on his studies.

Only then did he realize that an athletic career could be over in a blink of an eye from an injury, so he needed something to fall back on. He followed his doctor’s advice wisely. With his condition, he also skipped the next SEA Games in 2009.

After finishing his studies, he focused on being an assistant coach. Ninoy considered that he was somewhat semi-retired from the sport during that time. He had his first coaching stint at the age of 23 with the University of the Philippines under Coach Jun Reyes’s supervision.

Concurrently, he also worked as a private PE Fitness Coach at Colegio de San Agustin (High School) from 2009-2011. After leaving both San Agustin and UP, Ninoy happily accepted an assistant coach role at his alma mater, UST, alongside his former coach, Francis Oliveros.

He had slowly been coming back as an athlete with training after his hiatus that he decided he would focus on the Long Jump rather than Triple Jump as it would have less impact on his Achilles issues. He trained the high school athletes, mainly beginners, including UAAP High School Shotput Champion Gary Santiago. 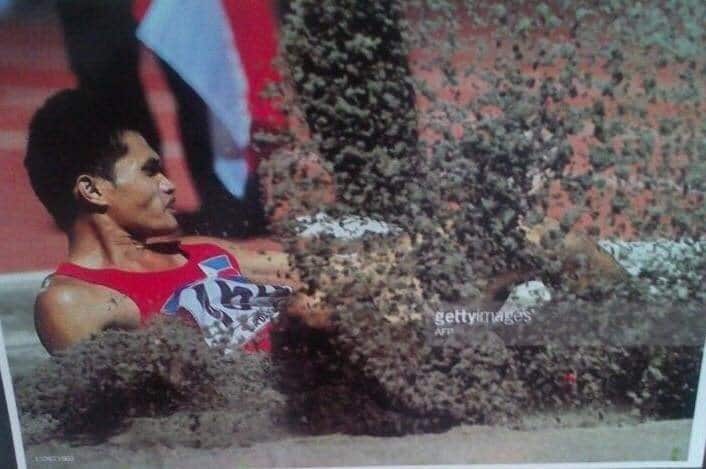 The following year marked his first competition out of semi-retirement after a couple of years. He joined the 2011 Philippines National Games in Bacolod. He took a very tight silver behind newcomer Nino Espinosa with them tying at 7.21m. Espinosa enthralled the win-on countback.

The top two jumpers in the country, Henry Dagmil, and Joebert Delicano did not join but could only manage 7.13m at the Asian Grand Prix shortly after the National Open.  Nino Espinosa leaped 7.43m in Vietnam and Marayag 7.42m in Singapore. In the next outing, Nino Espinosa failed to impress with a 7.26m leap, and at the Malaysia Grand Prix, Marayag won in 7.49m beating a Kazakh and a Malaysian athlete.

For the 2011 SEA Games, the coaches selected Dagmil, the 2005 and 2007 SEA Game Champion, and Marayag was selected over Delicano and Espinosa for the second spot. Shortly after that, Espinosa retired from the sport.

Ninoy took home a bronze medal at the 2011 SEA Games behind Supanara of Thailand and Dagmil.

Final Years as an Athlete 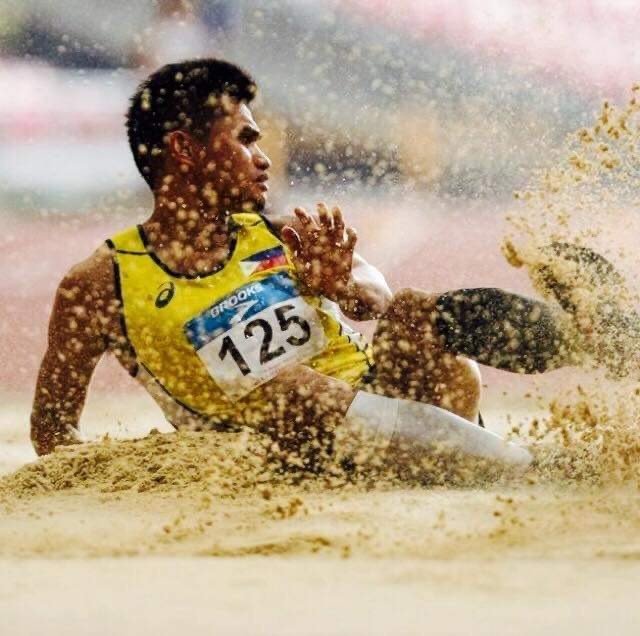 Marayag, in the 2013 SEA Games, took 4th place in the Mens Long Jump. He left the Philippines in 2014 to take up a coaching role with JS Athletics in Singapore, working for Jack Singh and Lydia De Vega. While coaching Singaporean athletes and competing in meets, he leaped 7.57m at a Swift All-Comers meet in Singapore. Ninoy was almost removed from the National Team by PATAFA until the PSC updated the PATAFA management with his recent Singapore performances.

While he failed to qualify for the 2015 SEA Games, he instead attended the Asian Championships.

Spectrum Fit PH and his advocacy

In 2013, he started a new Spectrum Athletics project, the Philippines’ first-ever program for people with special needs of all ages. Ninoy trained as an ABA Specialist under the mentorship of Dennis De Guzman. Spectrum Athletics later became Spectrum Fit PH.

Ninoy found the challenge of coaching special needs athletes taught him patience and made it a lot easier to coach non-special needs athletes. He said it was different as you need to really focus more on cognitive learning, motor skills, and functional movements. He said that the purpose of helping special needs people with a variety of disabilities such as down syndrome, ADD, ODD, ADHD, etc., was for them to become more functional in their day-to-day activities.

Later on, he also took up a coaching role at Emilio Aguinaldo College from 2015-2017.

Following his stint at Emilio Aguinaldo College, he is now an assistant coach at Mapua University. He works with Algin Gomez, Leonard Grospe, David, et al. He is also the jumps coach at Ateneo De Manila University, where he works with sprinters on strength and conditioning. Among his star athletes is Sheila Talja, a very promising Triple Jumper.

Ninoy is now the Head Coach of Hoka, a US shoe brand that has just been set up in the Philippines. He is now coaching live over Facebook and training athletes privately.

Ninoy would like to thank Coach Ronald Ramos of Tuguegarao. He’s like Ninoy’s second father. Even though Ninoy is already in Manila, he still gives him wisdom, advice, and motivation to excel in his athletic career and academics. 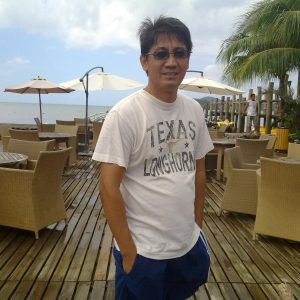 “Coach Francis. He’s not just a friend but a mentor and coach like a brother.”

Also, Ninoy would like to thank coaches Manny Calipes and Ming Lao! Whether you know it or not, you’ve become a powerful role model to us and have made a difference in the lives of many of us. I hope you know how much I appreciate you both. 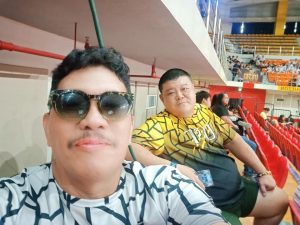 Above all, Ninoy would like to thank, first and foremost, his longtime coach and friend in the National Team, Sean Guevarra, who coached Ninoy for seven years – all of his time spent in the Team. 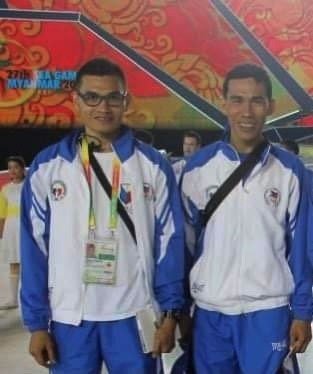 Ninoy’s favorite athletes to compete against are the two men who finished behind him at the 2011 SEA Games Long Jump. Supanara of Thailand, who he always felt comfortable and at ease with, considers him a good friend, and Henry Dagmil, whom Ninoy admires, his competitive spirit. 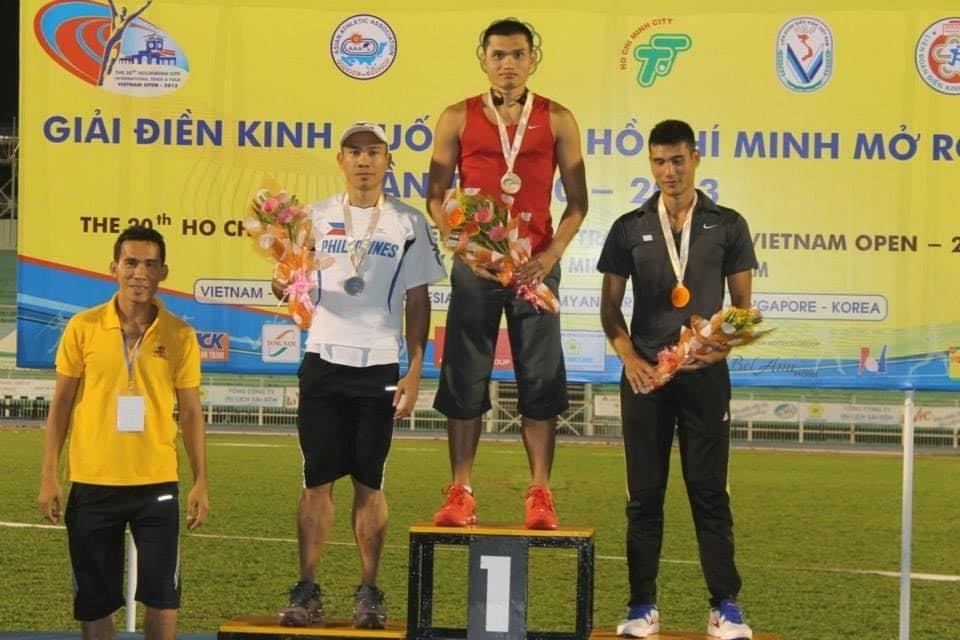 TIGER-BOAR Bites back with a 7.57m Long Jump! A delighted Marayag is in the best shape he has been in for a long time.

Former National Athlete Benigno Marayag dished out the second-best Long Jump of his athletic career. The 28-year-old, who had an emotional roller coaster of a week, finished the week on a high note with a performance of 7.57m +0.0 enough to surpass the bronze medal of the 2013 SEA Games, which is 7.53m. With Dagmil at 7.56m and Marayag at 7.57m, the benchmark becomes 7.57m+ for any other hopefuls for the SEA Games.

Marayag, known as ‘The Tiger-Boar’ as an Ex-UST student, is the 2011 SEA Games Bronze Medalist where he registered his career-best of 7.61m. Marayag hit the mark at the Singapore Allcomers today, where he leaped 7.49, 7.52, and 7.57m.