I really enjoy how well this young man is progressing. He has a lot of charisma and guts from this guy. And that’s what led him to a Vietnamese National Record beating the reigning SEA Games Champion. Like a Vietnamese Goku.

Definitely, one to watch out for in the future. Most importantly something which a lot of athletes don’t have this guy runs with a lot of passion and raw emotion.

This is something that coaches should really look for. While the spotlight was on Chinh and 400m and up. I think this guy is really breathing energy and life into the Vietnamese short sprints.

Ngần Ngọc Nghĩa mark put him ahead of 16-year-old SEA Youth Champion Malaysian Sensation Mohammed Azim Fahmi, who had run 21.04 at the Perak Allcomers on February 22.

With just the Thailand National Games left next month, it looks like Ngần Ngọc Nghĩa has a good chance of retaining 100/200 times in 2020.

Ngần Ngọc Nghĩa time came just .03 seconds away from breaking the 20.89 National Record of Lê Trọng Hinh, who ran that as a 19-year-old to win the 2015 SEA Games.

Le Trong Hinh bombed out of the heats finishing 6th in heat 2 in 22.59, well off his best time.

Trần Nhật Hoàng recording the fastest time in heat 3 with 21.58.

The final went to the advantage of the short sprinters, with Võ Minh Triều and Nguyễn Văn Châu crossing the line together for silver and bronze in 21.18 and 21.19.

So it was his 8th race in the tournament. Looking a bit tight coming off the bend, Nhia probably could have run more along the lines of 20.70 if he was fresher.

Vietnam is better known for its Sprint Queen’s Le Tu Chinh and before that Vu Thi Huong in the short sprints.

On Day 1 (November 10) of Vietnam’s National Trials for the SEA Games in Hanoi.

It was Ngần Ngọc Nghĩa who had the most outstanding performance clocking a personal best of 10.40 seconds.

The mark, of course, is awaiting the wind report reading before it can be officially ratified.

The 22-year-old got out even with the leaders, but around 70 meters to go pulled away from the rest of the pack in the race’s maintenance phase.

And in the process, Ngần Ngọc Nghĩa helped himself to the SEA Season lead for 2020, probably the first time a Vietnamese Male has led the 100 meters for a year.

With Thailand, Malaysia, and Indonesia historically dominating the century dash over the last half-century. 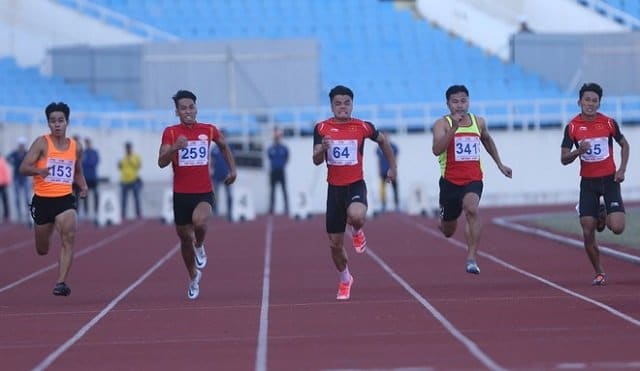 Despite having represented Vietnam as a youth since 2015, Ngần Ngọc Nghĩa has never participated in the South East Asian Games.

As the Vietnamese Athletics Association tends to focus more on 400 meters and up for men.

Nghia, who was pipped to the line in the 60, went onto win the 100/200 double in 10.62 and 21.63 at the Speedy Cup in Ho Chi Minh City back in June, the first meet for the second half of 2020 for Vietnamese who have chosen to train through and hold meets through COVID in preparation to hosting the 2021 SEA Games.

Ngần Ngọc Nghĩa will probably line up for the 200 Meters at the Trials.

I was in a motorcycle accident and wasn’t quite able to come back successfully. Although he finished 6th in the 100m in 10.87, he is expected to fare better in the 200m against Ngần Ngọc Nghĩa and the 400m guys.