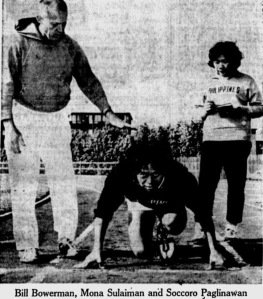 I would likely share with the athletic community another great tale of one of our countries legendary female sprinters Mona Sulaiman. Compiled by Pirie Enzo: but contributed by various sources including Mr. Ignacio Dee.


Long before Lydia De Vega captivated our nation. Even before she was born. There was a barefooted girl from Cotabato. Who would become Asia’s First double gold winner in the sprints? Her name was Mona Coco Sulaiman (sometimes spelled Solaiman).

Mona Sulaiman was also the first Filipina to win three golds in a single Asian Games. This took place in Jakarta in 1962. While Four years earlier Inocencia Solis had won the Philippines’ first gold medal in the Women’s 100m. Also, Mona Sulaiman would surpass and replace Solis as the dominant sprinter of the 1960s.

She competed in the 1960 (Rome) and 1964 (Tokyo) Olympics. Hence Mona Sulaiman was known as a fiery competitor. She once reportedly hurled a discus at rowdy onlookers during a local athletic meet. 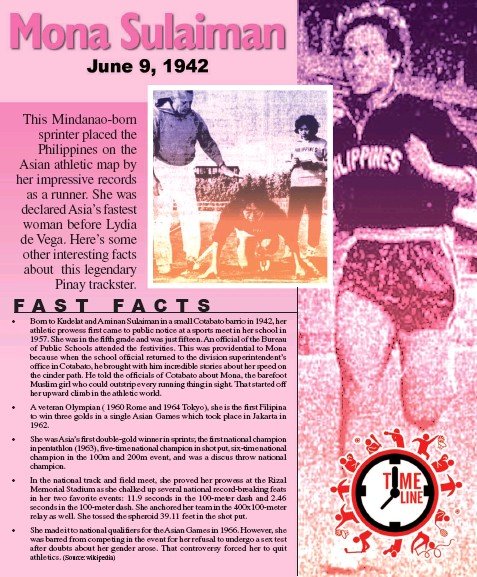 Mona Sulaiman was born to a Policeman Kudelat and Aminan Sulaiman on June 9th, 1942 in a small Barrio in Cotabato. She was the eldest of five children. While from the age of seven she represented Cotobato Elementary School.

Sulaiman was first spotted by an official of the Bureau of public schools. While at a sports meet in her school in 1957 playing softball she was in the 5th grade then and only 15.

While this was a turning point and beginning of her athletics career as when the school official returned to the division superintendent’s office in Cotabato. Furthermore, they sent for a local coach who would test out her skills on the athletic track.

The three were impressed and told Officials incredible stories about her speed on, the cinder. Also about this barefoot Muslim Girl. Hence it was the end of softball for Mona Sulaiman. At the National Scholastic meet in Lingayen, Pangasinan a coach from  Far Eastern University would recruit her.

Also, Mona Sulaiman would study a degree in Management. Mona recalls how Professor Ruperto Evangelista contributed a lot towards her coaching. Most noteworthy Evangelista was the mastermind behind several gold medals at the Asian games during the 1960s.

Three years later at the age of 18, she went to the 1960 Olympic Games in Rome. Sulaiman made the second round of the 100m and was eliminated in the heats of the 200m. Although Mona Sulaiman failed to land any honors in Rome. She came home, as she describes it, several times richer inexperience.

Most noteworthy From US champion Wilma Rudolph.  Sulaiman learned to improve her running techniques and discovered how to put her 58, 130-pound frame to the best advantage. Also, she also learned to combine her long strides with breathing and speed techniques. Yet while largely self-taught, she incorporated the techniques into her training regimen.

Such diligence earned her a double victory in the 1962 Asian Games in Indonesia and a slot in the country’s team to the 1964 Tokyo Olympics.

13 August 1961 Malacca Games, The women’s sprint was Mona Sulaiman’s all the way. A  powerful runner, she was well in the lead by the halfway mark and was clear at the tape.

“Inocencia Solis was the smoother sprinter but Mona was more powerful,” said Romeo Sotto, the ex-discus king who was in two Asian Games.

No competitors were eliminated in the heats. While the purpose of which appears to have been to assist in the seeding of the semi-finals.

Despite the fact that all starters in the heats qualified for the semi-finals there were was still some good running, Inokuchi equaled the Games record of 12.5 in the first trial and in the second heat Sulaiman shattered the record with an 11.9 clocking. The third heat went to Yoda in 12.3. Yet the winners of the semi-finals were Sulaiman (12.1) and Yoda (12.2).

Sulaiman always had the final well in hand and further improved the Games Record. Solis the defending champion, finished back in fifth place behind Ratnam who set a new National Record (from  Handbook of the Far East and Asian Games by Ian Buchanon ATFS, 1974).

To the glory of her country in the international events, she was a winner of two gold medals since she finished the 100-meter race in 11.93 seconds ahead of two Japanese runners.

Also, I’m not sure how Wikipedia got the electronic time? was electronics even invented back in 1962, I know by 1968 Tokyo Olympics electronics was in use this was the first fully auto system in place at an Olympic Games.

As in the 100 meters, the heats served only to assist in the seeding of the semi-finals and no runners were eliminated. While despite, the non-competitive nature of the first round Sulaiman set a new Games record when she won the second heat in 24.7. In the first semi-final, Sulaiman improved to 24.4 which equaled the Asian Recordset by Sim Keun Den of North Korea in 1960. Okudaira took the second semi-final in 26.1. As expected Sulaiman outclassed the field in the final and the surprise of the race was Dissanyaka who set a Ceylonese record.

The 200-meter sprint in 24.63 seconds according to Wikipedia. Also again as above I’m not sure of the electronic timing present? but the semi-final run was faster on hand times for Sulaiman.

She tossed the spheroid 39.11 feet in the shot put (11.97m) winning bronze an unprecedented fourth medal.

Her inclusion in the Tokyo event sent big sponsors such as Philippine Airlines on a race, too. Yet San Miguel Brewery pitched in for Sulaiman’s six-month training at the University of Oregon.

Also, She was accompanied by former Shotput Record Holder and coach Soccoro Baldomero Paglinawan who acted as a translator for Sulaiman who spoke little English.

While tapped as her official trainers were university track and field coach, Bill Bowerman, and Bro. Iking Gonzales. In addition, local shoe brands Elpo and Spartan helped her hurdle Portland’s inclined roads. After less than three weeks of training, Sulaiman clocked 10.6 for the 100m Yards just 3/10 off the world record.

Consequently, she returned to the Olympics in 1964 in Tokyo but failed to live up to her reputation as Asia’s sprint queen, again failing to qualify for the finals of the 100m and 200m events.

Furthermore, Sulaiman would throw the Shotput the following year in Tacloban to 13.60m which stood as the Filipino National Record until it was broken five years later by Fil-heritage athlete Josephine de la Vina at a meet in the United States. She would qualify for the 1966 Asian Games when she ran 25.1 secs at the national trials however she refused to take a gender test which barred her from participating at those games.

Sulaiman 100 and 200m National Records stood until the early 70’s when they were broken by Amelita Alanes.

Sulaiman for the record states

I was nursing a bad case of flu at that time and decided to forego the medical check-up because of my health condition.She was surprised that her refusal was blown-up as a gender issue, Sulaiman adds.

As I understood it, it became big news back home, shocking thousands of my fans.It might have made a few media careers, she says bitterly,but did they ever care  about the deep hurt it had created?

The gender flap nipped in the bud what could have been a glorious sports career and Sulaiman has kept her counsel since then, staying away from interviews and being wary of publicity.

Pag gusto ko ang tanong, sasagutin ko, (If I like the question, I’ll answer it), she tells this writer. Her world, she recounts, was turned upside down by the rumor. Not a day passed that people did not ask me about that gender issue.

The wife of a Visayan local official then once came up to me to ask about my true (sexual) identity, and I was so aghast that I dared her to allow her husband to sleep with me overnight.

The sense of intrusion became so overwhelming that Sulaiman felt forebodings of physical harm.

Also, she decided to pack a pair of .45 cal. guns on her waist to protect herself. While confused, she started doubting even her athletic prowess.

Did people seek her out because she had brought honor to the country, or were they only after her as an object of curiosity? Nothing seemed concrete, she recalls feeling then.

Plagued by self-doubts, Sulaiman eventually lost interest in sports competitions. And dropped out of the scene. Also, she took various jobs after college: a checker at the Manila Appliance Center for two years; a staff assistant in Guam for a local film producer, a bit player in 1978.

Yet she appeared in 18 movies under Junar Productions, taking second lead roles at the urging of actor-producer Jun Aristorenas and wife, Virginia Soliman.

Among her memorable movies, says Sulaiman, are Sta. Fe, The Panther, Akoy Lupa, and Interpol Malaysia. Another movie project, Asiang La Luma with Nida Blanca and Pepito Rodriguez, fizzled out. There were also offers to do TV commercials and a flight stewardess job for Philippine Airlines, says the former champ, but they didn’t work out.

She tried her hand in small ventures as a supplier of Mindanao goods, manager of three beer gardens in Pasay City, and a proprietor of a mini-grocery. Only the grocery remains in operation.

Shrugs Sulaiman: I easily get fed-up with running a business. I can’t stay long enough to see it grow. Perhaps my heart still hankers for sports, where I truly belong.

To indulge herself, she joins athletic events on her own. Bagging a gold each in the shot put and discus throw events at the Asian Veterans Championship Meet in Bangkok, Thailand, last year. Nothing short of what I could call my legacy, she confesses.

She’s also found time to travel. Spending her savings to visit pineapple magnate King Parker in Hawaii. Another friend in San Francisco, and a colleague in Malaysia.  Also Sulaiman relishes as well her closeness to the Marcoses, who once gifted her with a 30-cc Honda motorcycle.

Sulaiman during the 90s was a PSC Consultant according to her former colleagues her last known address was Pasay.

In October 2016, Sulaiman was reportedly confined to a wheelchair. She died in Manila on December 21 at the age of 75 after a lingering illness.