“The Flying Sikh” Milkha Singh dies at 91 due to post-COVID complications. After a month-long fight with post-COVID-19 problems, legendary Indian sprinter Milkha Singh passed away at the age of 91.

In the same hospital where the illustrious runner passed away on Friday, Milkha’s wife Nirmal Kaur, a former India volleyball captain, lost her battle with the illness five days prior.

After being abandoned and uprooted during India’s Partition, Milkha Singh went on to become a global sports legend. He is the first athlete to have captured gold in the 400-meter race at both the Asian and Commonwealth Games. He also took home gold at the Asian Games in 1958 and 1962.
He competed for India at the Melbourne Summer Olympics in 1956, the Rome Summer Olympics in 1960, and the Tokyo Summer Olympics in 1964. For his athletic accomplishments, he received the Padma Shri, India’s fourth-highest civilian accolade.

1. At the young age of 12, Milkha lost both of his parents during the racial unrest that followed the partition of India and Pakistan.
He subsequently fled for his life and traveled to India.

2. He used to commute 10 miles each way in bare feet from his Pakistani house to a local school.

3. He applied to the Indian Army but was turned down three times.
He persisted, and after enrolling himself in the engineering department, he was chosen after his fourth attempt.

4. In 1951, when he began working at the EME Center in Secunderabad.
He realized his athletic prowess at this place.

5. He regularly practiced by racing the meter gauge trains during his downtime, which was when the soldiers did odd duties.

6. During his practice sessions, he used to spit blood, urinating blood, and even pass out.
He was on his deathbed more than a few times, and there were instances when he needed oxygen support.

7. Milkha placed sixth out of 500 competitors in his first ever competitive competition, a cross-country race.

After his unmatched performance at the 1958 Asian Games in Tokyo, he transitioned from a Sepoy to a Junior Commissioned Officer in the Army.

12. During the 1960 Rome Olympics, he shot to fame.
It was his long hair and beard that made him so well-liked.
The Romans had never seen an athlete with such unusual headgear before Milkha.
In fact, because of his headgear, some in Rome believed he was a saint and questioned how a saint could run so quickly.

13. Pakistani General Ayub Kahn gave Milkha Singh the nickname “The Flying Sikh” in 1962 after he defeated Abdul Khaliq, the fastest runner in Pakistan.

14. In 1999, Milkha adopted the valiant Havildar Bikram Singh’s seven-year-old son, who had lost his life in action during the Kargil War battle of Tiger Hill.

15. For just Rs. 1, he offered his biography to Mehra, the director, and producer of “Bhaag Milkha Bhaag.”

16. According to Milkha, he hasn’t seen a movie since 1968.
He was moved to tears and relieved that Farhan Akhtar performed his character justice in “Bhaag Milkha Bhaag.”

17. Milkha Singh turned down the renowned “Arjuna Award” in 2001, claiming it was given 40 years too late.

18. He was once detained in Tihar Jail after being discovered on a train without a ticket.
He wasn’t free until his sister sold some of her valuables to pay his bail.

19. His final wish is for one Indian boy or girl to bring home an Olympic gold medal for the nation. 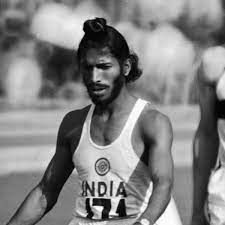 Indian Olympic running legend Milkha Singh — otherwise known as the Flying Sikh — gets the lavish biopic treatment in “Bhaag Milkha Bhaag,” a rousing and handsomely crafted sports drama that’s on sure footing when it sticks to the track.

The Milkha Singh Story is told in the film.

It attempts to use Singh’s life as a metaphor for the tumultuous Indo-Pakistani ties in the years following the 1947 Partition, but it falls short. Farhan Akhtar, a director-turned-actor, gives a strong lead performance.

Viacom 18, the film’s producer, could see strong sales from this global July 12 release. if somewhat less than what the film’s intense level of early buzz suggested.

Singh and his daughter, Sonia Sanwalka, co-wrote his autobiography, titled The Race of My Life.[12] The book inspired Bhaag Milkha Bhaag. Singh sold the film rights for one rupee and inserted a clause stating that he would share the profits with the Charitable Trust. The Trust was founded in 2003 to assist poor and needy sportspeople.

Bollywood Hungama‘s Taran Adarsh predicted that it would “win accolades, admiration, respect, and esteem, besides emerging as a champ.” Simultaneously, Sneha May Francis of Emirates 24/7 gave a thumbs up, saying that the film is “truly epic” and that “despite the prestigious Olympic glory eluding him.

Mehra deservedly honors the runner’s other victories and impeccable talent, allowing us to applaud the prodigy.”

Desimartini, with almost 5000 ratings by the end of the weekend, stated the following: “Superbly directed, Bhaag Milkha Bhaag is an outstanding film.

With an incredible performance by Farhan Akhtar. Though long, it keeps you hooked throughout. Don’t miss this patriotic tribute to Milkha Singh.”

How many medals have milkha Singh won?

Did Milkha Singh ever have an Australian girlfriend, as shown in the movie ‘Bhaag Milkha Bhaag’?

Because Milkha Singh had a say in how the plot was developed, one might conclude that the brief fling with the Australian girl during the 1956 Olympics did take place.

Instead, our voyeuristic nature may WANT it to be true. However, it will be difficult to determine how much of the story is true. It was a minor occurrence in an otherwise distinguished career.
In those days, paparazzi weren’t following every famous person around in search of a photo opportunity. Therefore, whatever had occurred might have occurred covertly, with just Milkha Singh and his girlfriend being aware of it. Additionally, nowhere does this minor aspect of his life get mentioned. even his autobiography was not.

According to every other account, his lack of international experience caused him to lose at the 1956 Games. Therefore, no one can be certain.

Read his interview, where he provided a somewhat civilized response to this.

How is Milkha Singh as a person?

I patiently waited until another person emerged from the gate. I asked him the same question and he replied that he was at the neighboring park and that I could go there. He also assured me that Sir will arrive at any moment. I decided that I would rather wait there than go to the park. (In the interim, a whiter-than-white BMW pulled up to his house; the driver unloaded a golf bag, and the car was parked by the front door. An attractive lady sitting in the back seat was watching me; she asked the driver, when he returned, who I was, and then drove away. (I was stupid enough not to identify her at the time; I later learned that she was his wife.) A gentleman even gave me a chair to sit on while I was still standing (Which must be his P.A).

Then I noticed (MILKHA SINGH JI) leaving his residence via a nearby road. As soon as I hurried over to him and touched his feet, he blessed me and began to question me about nearly everything.
He led me through the gate and inquired about my father’s job, showing a keen interest in my responses, and inquired about my town. He inquired about my schooling, the place I was staying, the cost of my accommodations, and the quality of the meals; asked whether I do any sports and if I enjoy running.

He is the most humble individual I have ever encountered. He called me son and himself uncle during the entire talk. He even remarked, “Thank you, son, for taking time out of your schedule to meet me; you are lucky that you have to see your uncle,” with great compassion. I am not available anyway. He repeatedly expressed gratitude for my time. The best thing he said was: “Have you ever seen God? I replied that I had not. Do you know whether or not God is present, he continued.
I objected once more. He then said something great. Your parents are your deity, he added, since they gave you life.

He claimed that the secret to anything I do is hard effort. He said that your uncle’s success now is the result of his labor. He questioned my viewing of his movie and my opinion of it. He questioned whether I had a camera, and I said that I did have a phone. Then, after asking his guard to take a picture of us, which I missed and retained in my pocket, he remarked, “Show me the photo, WOW, how is it?” He brought the phone closer so he could see the picture while keeping a palm on his forehead. He was so humble, it captivated me. I declined his request for tea or coffee, and he then blessed me before I said goodbye. This was my meeting with The Flying Sikh.