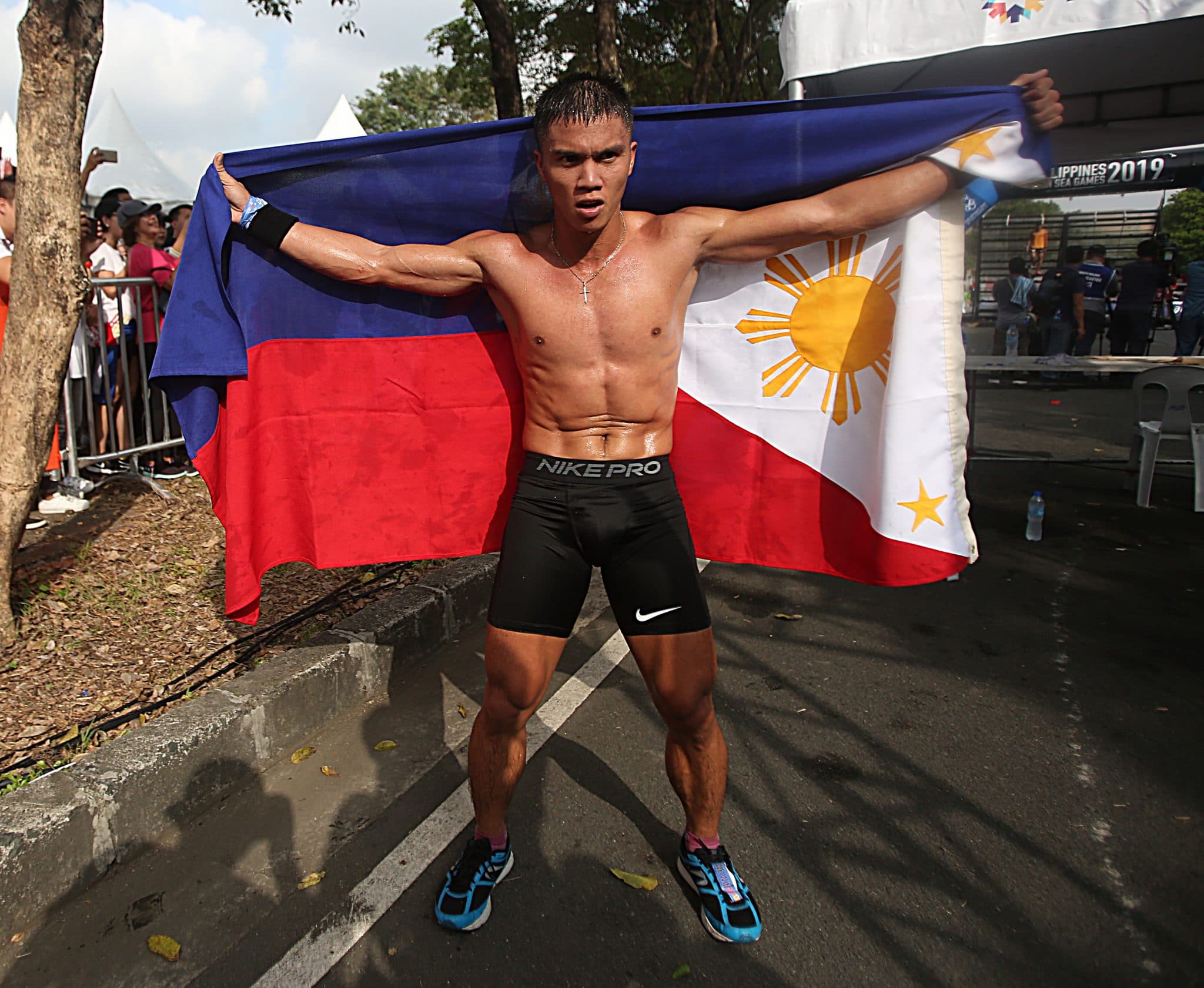 Mervin Guarte is the latest induction into Pinoyathletics Legends of Track and Field.

Having amassed a cabinet full of silverware in Athletics. With 5 Silvers in Middle Distance events in Athletics and a Bronze.

For 9 years he has held the Philippine Record and even more unbreakable Junior Record which both are united at 3:47.65 form the 2011 SEA Games.

He also is no longer active in Athlteics having made the move over to Obstacle Course Racing.

It wasnt until Grade 6 though he started showing considerable improvement.

Mervin would train with his older brother to prepare himself for future competitions. He also had to jog 5km to get to school. Which he would run barefoot back and forth on a daily basis to build his stamina.

In High school he trained with his first Coach. Coach Ilagan. Ilagan later went onto be the Coach at the University of Batangas.

It was at the Palarong Pambansa were Mervin after surpassing the Palaro 800m Record in the Heats duelled with Salvador Garin (IV-A). A very fierce brutal fight with elbows thrown with Garin winning 1:55.69 to 1:56.31. Mervin did win the 1500m in 4:07.94.

One of the Highlights of Mervin Junior Career was how he was able to place 4th at the Asian Juniors in the 1500m in 2010.

With his success at High School Level. The college recruiters came calling. It was a veteran coach by the name of Jec Gando from San Sebastian College that Mervin ended up being coached by. Under Gando Mervin broke and still  has the 800, 1500, 3000m Steeples and 5000m NCAA Records.

Mervin was then taken into the National team by Coach Ojon Artiaga. And he unified the Philippine Senior and Junior Record in the 1500m with a time of 3:47.65 which still stands to this day.

And demolishing the junior mark of Victor Idava 3:55.6 which had stood before the Gintong Alay era since 1974.

“Coach Pak (Ojon) was a very caring coach. Like a father and he cared alot about the wellbeing of his Athletes. Mervin fondly recalled. A lot of people don’t quite understand Coach Pak. But he was good to me.”

Guarte later went onto win a string of several more Silver Medals at the SEA Games. Having a fierce rivalry with Vietnamese athlete Duong Van Thai.

Van Thai undoubtedly the greatest Middle Distance runner in the History of the SEA Games.

On a number of occassions Mervin pushed Duong Van Thai to blanket finishes at the line running with utmost fury.

Van Thai who is the same age as Mervin is still active and looking at defending his SEA Games 800 and 1500 titles at home in 2021.

In 2017 Mervin was removed from the National team by PATAFA despite being the National Champion and SEA Games Bronze medalist. Reasons being cited as coaching issues. Despite numerous appeals and runs he decided to move on aftera  year. He then made the life changing move to Obstacle Course racing. 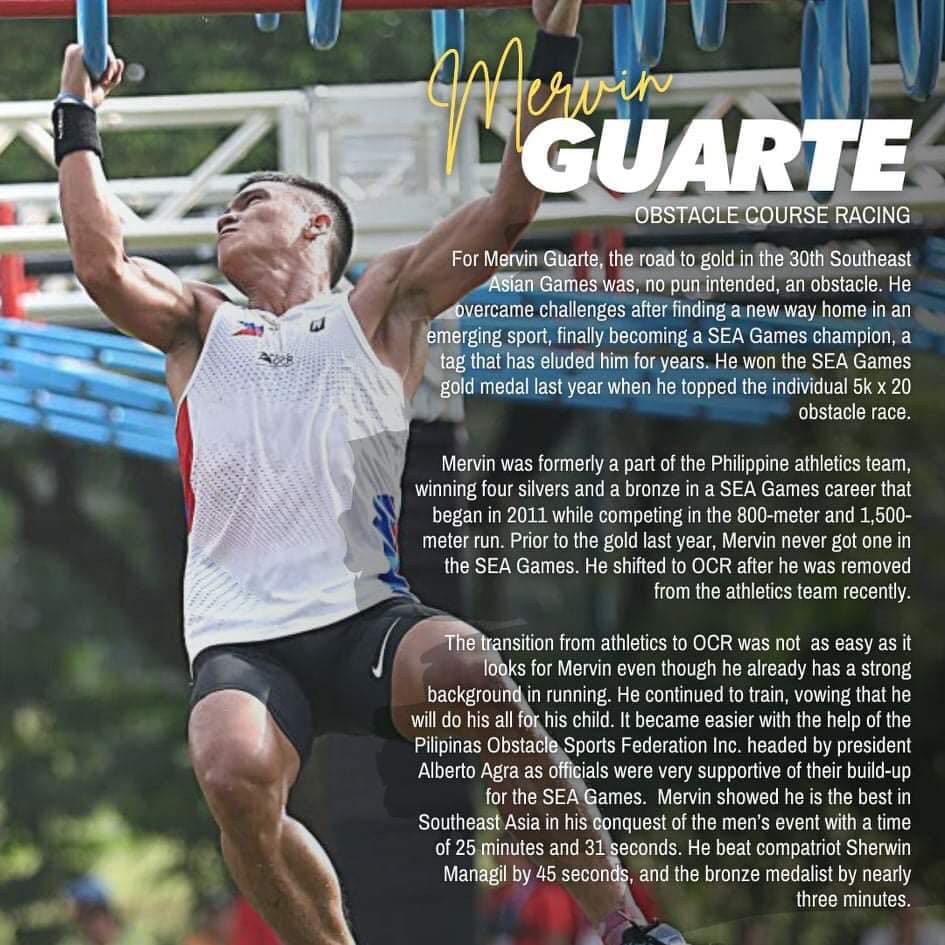 “Obstacle Course Racing Management has looked after me alot.

They are very supportive.

The President of the Association consults with the coaches regarding my program.”

It was a 1-2 finish for the Philippines with Milky Mae Tajares taking the surprise silver.

After being removed from the PSC Payroll by PATAFA despite being a SEA Games bronze medalist in 2017.

Mervin Guarte finally decided to walk away from the sport and try his luck at Obstacle Course Racing.

A change that allowed him to finally secure a hard earnt Gold.

Mervin who recently became a father has now netted 200,000 pesos for the gold achievement that will also go well towards his home in Occidental Mindoro.

Overall the Philippines swept 100% of the Gold medals in this events or 6 of 6 events.

All in All Obstacle Course Racing was very successful in the SEA Games with the Philippines taking 100% of the Golds in Alabang, Philippines 6 of 6 Gold Medals.

If asked if he would consider returning to Athletics as Obstacle Course Racing is not in the program for 2021 SEA Games?

Right now I’m happy with Obstacle Course Racing. Even if no SEA Games.

We still have the Spartan World Championship event in Abu Dhabi November or December 2020 depends on COVID.

Which is different to the 5km 20 obstacle event I did to win Gold at SEA Games.

If I do go back to Athletics it will not be in Middle Distance.

Maybe one day I want to be Milo Marathon Champion. But for now Im happy with OCR.

Right Now Mervin has the luxury of an Obstacle course for training which is set up at his Airforce Barracks at Lipa.

He trains at Philsports or UMak.

Guarte has a tough schedule as he is also entered in the 1500m on Day 2.

Francis Medina who wasn’t able to finish at SEA Games.

Along with 400 runner Michael Del Prado who will try his luck over 400 Hurdles, they are in a 4 man race.

Along with Medina another athlete who has already surpassed the bronze of last SEA Games John Albert Mantua will see action in the Discus.

But obviously won’t have it as easy with  4 athletes ahead based on PB.

SEA Games Long Jump Bronze medallist Janry Ubas who has leaped 7.26, 7.38 this year looks to improve on his seasons best.

In the field is Deokhyeon of South Korea who has leaped 8.11m.

Bautista is the strongest of the South East Asian athletes entered in 2 heats.

In the Javelin, Evalyn Palabrica SEA Games Bronze medalist in Javelin is up against the Top 2 in SEA Games Natta Nachan and Jiraya Wichaidit of Thailand. Palabrica PB of 48.25m dates back to 2014.

While Mens Bronze medalist Melvin Calano of the Philippines also competes, up against Peerachet Jantra the SEA Games Champion from Thailand. 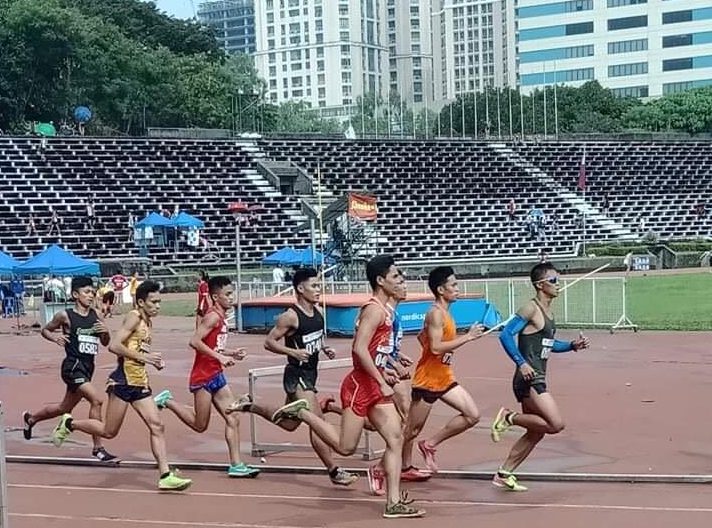 Guarte wonderful run continued with a splendid 9:25 in the 3000M Steeple Chase yesterday. Most noteworthy is that Guarte ran his PB way back in 2014 which was then the NCAA Record. In contrast, his time is the 2nd fastest this year behind National Champion Richard Salano (9:23.81).

Mervin Guarte, who has been under his new coach veteran Head Coach Dario De Rosas for 2 months. While he has made very good progress. Furthermore, Guarte started off last week with a time of 3:54/3:55 in 1500. Which is nearly as good as the 3:53.63 he timed at the SEA Games last year to get his Bronze Medal. Due to lack of quality opponents, Guarte was a lone wanderer winning the race with second place a far distant 4:06 in 1500. 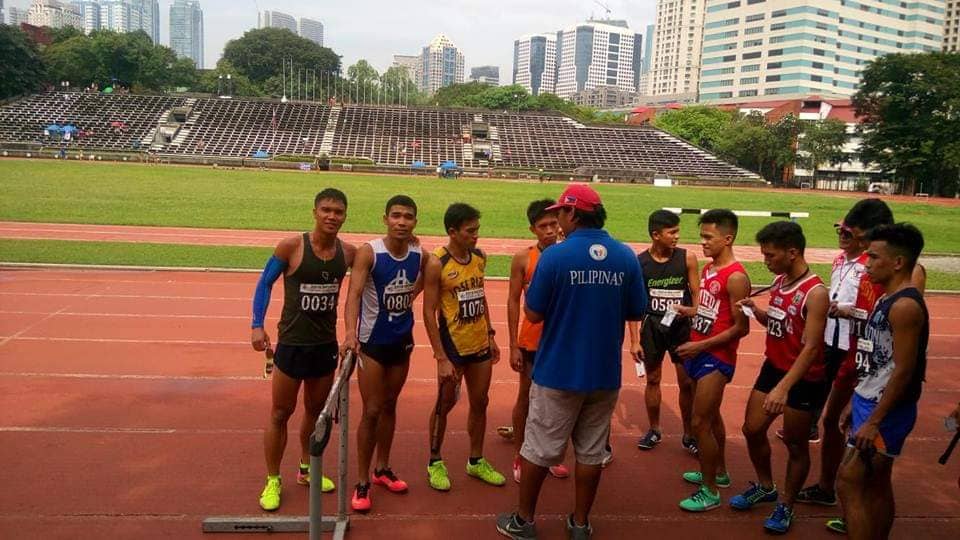