Mark Harry Diones is the favorite for the SEA Games, having beaten the reigning SEA Games Champion Hakimi of Ismail of Malaysia twice this season. Firstly at the Philippines National in April. He went one better by capturing a silver medal at the Asian Championships. Diones was only fourth place in his first SEA Games two years ago in Singapore.

Hailing from Bicol, Diones broke the Palarong Pambansa Record in 2010 with a 14.44m jump. From there, he was recruited by coach Jojo Posadas for JRU. There he studied Criminology. His breakthrough came with the NCAA Record, which saw him become a mainstay in the National Team.

Mark Harry Diones added a second gold and another gold in the Jumps for the small Philippine delegation to the Thailand Open.

It came after Janry Ubas won the Long Jump on Day 1 for the Philippines.

Silver went to Warunyu Kongnil, the 2015 SEA Games Gold medallist who improved his season-best from 15.99m to 16.09m.

The bronze went to Dione’s teammate Rone Malipay who improved his recent PB from 15.55 to 15.85.

However, Ismail gradually improved to 16.61m in Kuala Lumpur on May 14. Ismail did not participate in the Thailand National Open.

After EJ Obiena’s bronze medal at the Asian Championships in the Pole Vault on Day 1.

A second medal followed with Mark Harry Diones of the Philippines leaping 16.45m to claim the Silver in the Triple Jump.

Although it was not quite his best of 16.70m, he jumped at the Philippine National Open in Ilagan.

Diones must be pleased to come out with a medal in his first major international meet. The performance rates are among the best achievement in the coaching career of Noel George ‘Jojo’ Posadas, whose wife and star athlete Elma Muros had 2 silvers and 2 bronzes in her career at the Asian Championships.

It is certainly his best achievement in the last 10-15 years.

Diones leaped the 16.45m on his third jump and fouled three of his six attempts.

His last jump, 16.43m, secured him silver on the countback, With Xiaoling clearing all his jumps and ending up with 16.41m as his second-best on the last jump.

Harry’s key rival and defending SEA Games Champion Ismail Hakimi of Malaysia, who he had defeated at the Philippine National Open, was well off form, finishing 5th in 15.97m.

The win over Hakimi makes the Philippines certain of a third sure gold medal at SEA Games. Diones was fourth at the 2015 SEA Games in Singapore. 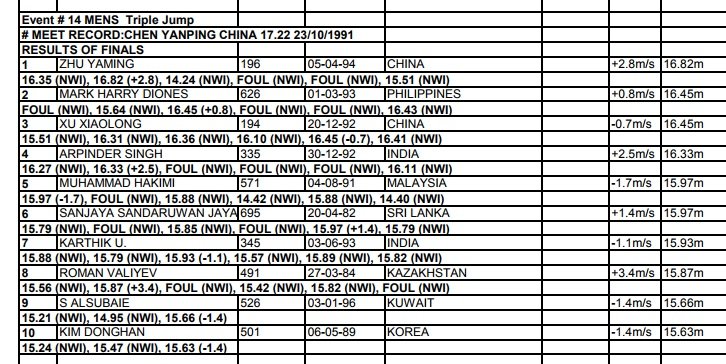 Diones shattered his existing national record of 16.29m set last year at the weekly relay finals. Diones is a graduate of Jose Rizal University in Manila.

From Malbogon, Can Marines Sur, in Bicol, He first came to prominence back in 2010 when he broke the Palarong Pambansa Record; then, Posadas recruited him to JRU.

What’s impressive is Harry’s jump is just 10cm off the world championship standard of 16.80m. In Rio, the Olympic standard was 16.90m.

Harry is an athlete who needs more support in private and government. However, more tune-ups can qualify for world champs, with the cut-off being sometime in July.

The last SEA Games was won in 16.76m by Muhammed Hakimi Ismail of Malaysia in a SEA Games Record.

Harry, who is well beyond the Silver standard of 16.20m, has secured a SEA Games spot.

But on this occasion, Ismail settled for silver behind Diones with 16.06m.

In this event, Rone Malipay, the other national jumper, wound up in fourth place, improving his PB from 15.39m to 15.55m. Malipay performance also places him #5 on the all-time list. But needs to hit SEA Bronze of 15.92m to make the trip to Kuala Lumpur. 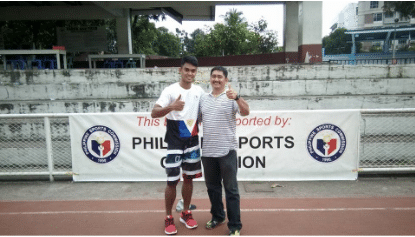 Mark Harry Diones registered a new personal best of 16.29m. This mark has surpassed the National Record of 16.12m set by Joebert Delicano in the 2009 SEA Games in Vietnane, Laos.

Pinoyathletics.info will wait for confirmation of the wind reading before updating our database.

Diones, who hails from Bicol and is a Criminology graduate from JRU, has been guided by the same coach Noel George (Jojo) Posadas since he started at JRU in 2010. Diones was in fourth place last SEA Games. 16.29m surpasses the silver medal standard of the 2015 SEA Games (16.20m). The last SEA Games was won in 16.76m.

Ronne Malipay was a very distant second at weekly relay finals with 15.31m.