Marisa Kwiatkowski is a Filipino Triple Jumper who currently holds all the Filipino National and National Junior Records in Triple Jump. Including the National Record of 12.92m.

Marisa Kwiatkowski extended her Filipino Indoor Triple Jump Record again. And extending her 12.55. Jumping a series of  12.57 and then  12.58 at the University Washington Indoor at Seattle. She also registered 5.56m in the Long Jump.

The second of two Philippine National Indoor records fell in the first month of 2018. Fil-Heritage Triple Jumper Marisa Kwiatkowski won the University of Washington Preview with a leap of 12.55m on January 13. The mark surpassed the old mark she had set at the Penn Relays last January of 12.45m. 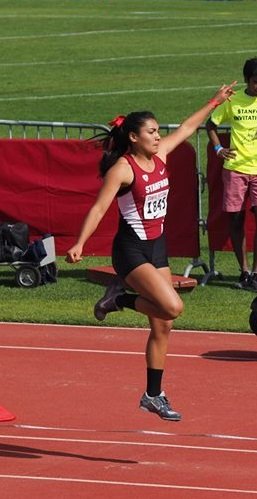 She was invited to join the Prestigious World University Games in Taipei last year, but she begged off due to a long season.

However, she is still like the last 2 SEA Games, a long way from the SEA Games Bronze medal mark of 13.32m.

The Philippines has never won the Women’s Triple Jump at SEA Games. I’m not even sure if they have even won a medal.

She also placed 5th at the same University Preview meet in 5.58m in the Long Jump, Well off her 5.89m PB set 3 years ago.

Playing in her first year of college. Kwiatkowski, who represents Stanford, leaped 12.68m (1.4) to place 26th in the NCAA Western Preliminary rounds.

However, she did not progress to the National Finals but, in the meantime, nabbed the Philippine National Record. In conclusion, the Top 12 qualified for the finals, with 13.08m being 12th place. Chaquein Cook of Oregon had the best leap of 13.51m to lead the qualifiers to the Finals.

The Record was held by Marestella Torres, who leaped 12.67m (-0.5) in 2004 by 1cm. Hopefully, a big improvement is just the beginning as 1cm is quite a small improvement in this event in 13 years.

It was only a matter of time for Kwiatkowski, who had leaped a wind-aided 12.68m (+3.3 m/s) in April. Felyn Dolloso of Dasmarinas had leaped 12.69m last PRISAA, but no wind gauge was present, and the meet was unsanctioned.

Marisa Kwiatkowski took the season lead from Angel Carino at 12.60m at the UAAP Championships. Kwiatkowski is looking at debuting in The Philippines at the World University Games in Taipei in August. In conclusion, she is a long way from the SEA Games bronze mark of 13.65m, the deadline for qualification for this event is July 1.

Another National Indoor Record Holder, Marisa Kwiatkowski, 18, leaped 12.11m also meet as Donovant and Eric Cray outside her Record of 12.26m set the other week.

This was set at the University of Washington Preview at Seattle, where she also ran 8.12 in the 60m. The half-Polish beauty obtained her passport nearer the end of last year, so she is now eligible for Philippine Records.

Kwiatkowski is from the same track club as Alyana.

While Kath was out in Los Angeles doing her bit for the Philippines. Another young jumping star continued her impressive season.

18-year-old Marisa Kwiatkowski out at the Arkansas razorback meets improved her Philippine Indoor and Junior Indoor record (11.99m set last week) with a leap of 12.26m.

Kwiatkowski, who is born in 1996, has one more year left as a junior; the next target would be the Junior Record of 12.55m set by Felyn Sausa Dolloso in the 2012 PNG in Dumaguete.

Marisa held a PB of 12.58m in this event and did this last year before obtaining her Philippine passport in December 2014.

Meanwhile, Marisa former club-mate Alyana Nicolas, on the other side of the country, improved her PB to 3.50m indoors at the Armory in New York. Alyana (now 21), whose previous best of 3.47m back in 2013, surpassed the Philippine Junior Record; however, she did not have a passport back then.