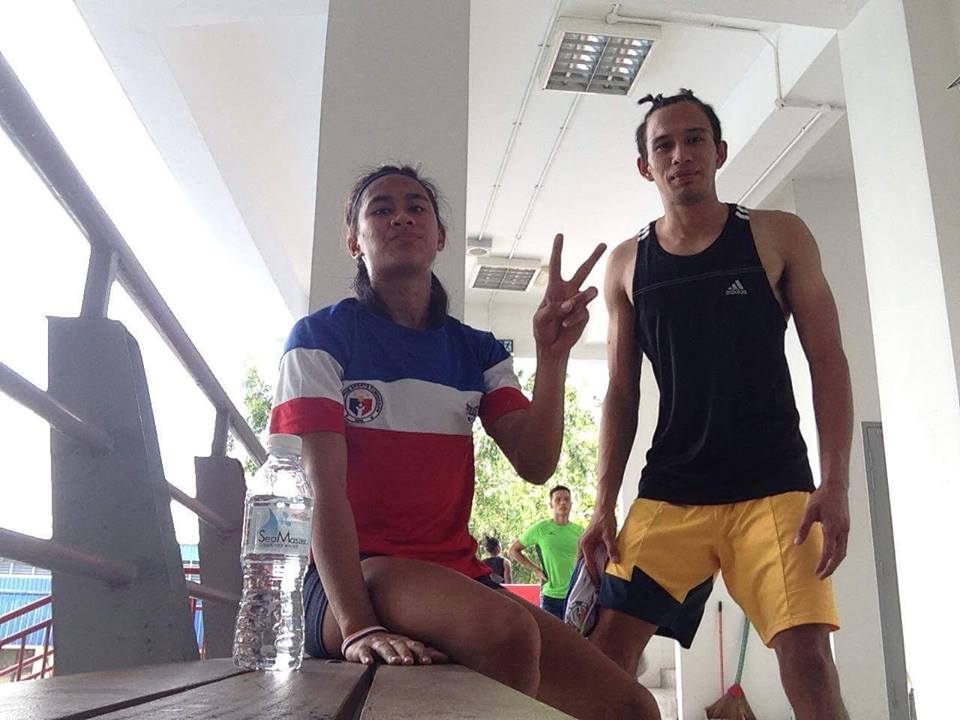 The Philippines gained three medals in the 2016 Malaysian National Open held in Kuala Lumpur from September 30 to October 2.

The highest honor went to Francis Medina. The 20-year-old playing his first year of senior competition clocked a new personal best of 52.82, improving his mark of 53.26 from the NCAA in February.  Medina placed second behind Saleem Hamid of Kuwait, who won in 51.70. The performance hurled Medina from 10th to 5th in the 2016 SEA Ranking List. It also put him within range of the top 10 of all time, #10 Domingo Manta 52.78.

His time was outside the SEA Games bronze standard of 51.36. But with another 12 months to go, he is making some good progress.

The other medals came from two old warhorses of the Philippine Team. 37-year-olds Rosie Villarito and Narcisca Atienza. Atienza delivered a silver with a score in the Heptathlon in 4369. However, she lost to Malaysia’s Norliyana Kamaruddin 4913 pts. On the other hand, Nars scored 4798 pts last SEA Games to get the bronze behind Thai’s Sunisa (5396 pts) and Kotchakorn (5280 pts).

In the Women’s Javelin, Rosie Villarito, who was suffering from hamstring issues, threw 41.30m. Jariya Bichaidt  (Thailand) took the Gold in 48.74m, and silver went to  Fatin Shahiera (Malaysia) 41.95m.

It’s very likely at their advanced age; it will be the last time to see Atienza and Villarito attempt to qualify for the SEA Games.

In the 400 Hurdles, Marilyn Avila was disqualified after finishing second place. And can find results at Adriansprints.com.

To those who are asking Kung Bakit Ako Na DQ

Our athlete Marilyn Avila finishes 2nd close behind the first place from Malaysia. But turned out to be disqualified from the announcement/posting of a result.

I immediately consult the referee to know what was happening; the track referee said that the lane umpire positioned on the first curved reported that the athlete from lane 6(Avila) deliberately hit the 2nd hurdle without the detailed action of our athlete on such hurdle to support the claim.

We saw the case, and Marilyn Avila also supported that she jumps over the 2nd hurdle but hit the hurdle in her downward motion due to her chopping action, which is clearly not her intention to hit the hurdle.

This claim supports the wound on her right Achilles(lead leg) resulting from her chopping action. Another thing is that it was the only hurdle out of ten that have been hit.

Then I told the referee that I would file a protest, and he said that I must see the meet manager.

Then the meet manager advised me to make a protest letter and pay 100 US dollars, so I immediately comply. However, a moment later, the awarding ceremony for women’s 400m hurdles took place even with my action. Avila was deeply distressed and crying while watching the ceremony…….

The jury composes of 5 invites Marilyn Avila and me to discuss the issue…one of the juries opened up the meeting by saying that the group decided to decline my protest when I try to explain and justify. to my surprise, they don’t even know the chopping of hurdles term on my letter; I demonstrate to them that chopping is the action of the lead leg from above the hurdle going down, then one of them ask “why it was hit if it was downward,”

I said that it was because she takes off early and ae nearly falls on the landing. Also speaking, the wound on Achilles was the proof of this action. But, then, one of them said, ” The wound might exist yesterday or the other day”…

I assess that none of them was a hurdler or knowledgeable about hurdles and don’t know much about hurdle rules.

It looks like I’m debating in front of 5 older men, but the end. They said that they would discuss

with themselves again and inform us of the results…………………..

We wait, and the final decision is very disappointing! DECLINED!

They said that ” please do not be disappointed by our decision. “I said to them my last word… ” we will accept your decision, but we are disappointed, asking how can I explain this to my athlete” …

Anyway, Narcisa Atienza in Heptathlon got a Silver, Francis Medina-Silver in 400 hurdles, and Rosie Villarito got a Bronze in the javelin.