Who Robbed the Rubber at the Marikina Sports Centre?

Apparently, the rubber is gone from the Marikina Sports Centre’s track oval.

Due to flood damage, the track oval’s rubberized surface has been removed.

Also known as Marikina Sports Park and previously known as the Rodriguez Centre.

It was built in 1969 by Rizal Governor Isidro Rodriguez Sr and was well known as state-of-the-art then, the first rubberized track in the country, at a time when track ovals were still known as “cinder paths.”  With rubber gradually replacing the dirt and cinders tracks, there was no longer any need to use the spiked athletic shoes, slowly fading into oblivion.

Marikina held the 1973 Asian Track and Field Championships and the 2014 ASEAN School Games. 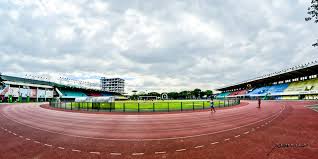 For a complete list of track ovals in the Philippines