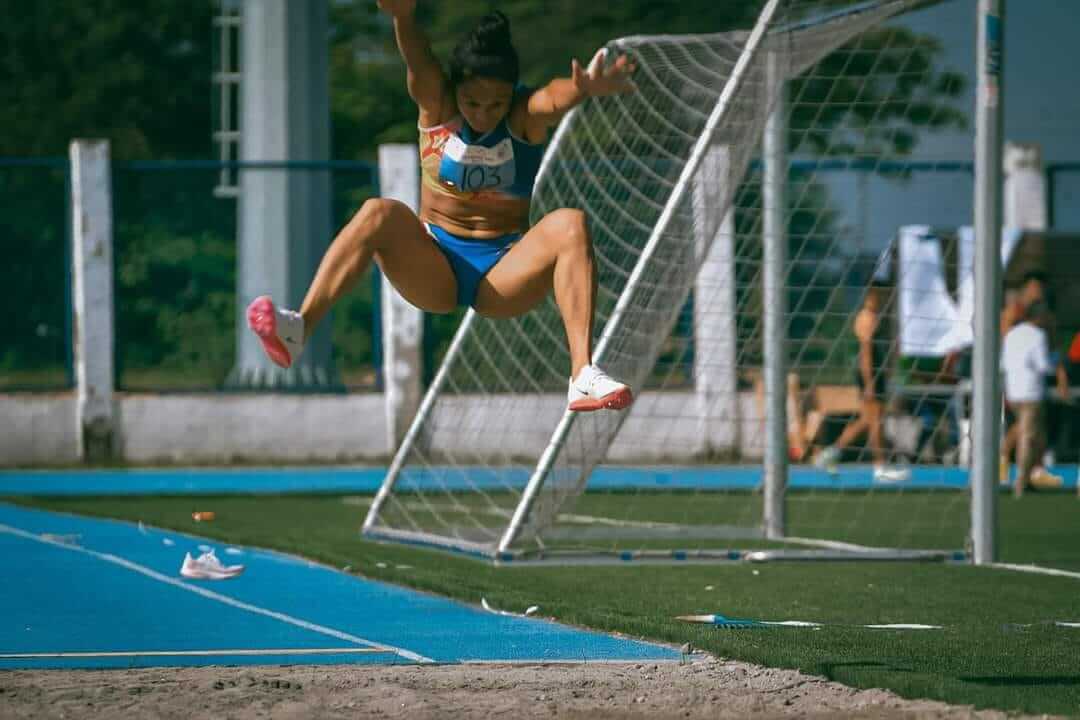 A career that spanned over 2 decades. After 23 years of loyal service to the national team, Marestella Torres finally hangs up the spikes and focuses on other ventures. One of the greatest ever Filipina Athletics Athletes of the 21st Century. Her feats in the Women’s Long Jump include.

Marestella Torres at 41 scores another win over Khay Santos

Torres Sunang did it again scoring 2 of 3 wins over her long-time rival Katherine Khay Santos. Marestella again at 41 showed consistency with a 6.00m jump. Khay Santos had the win over Marestella in Baguio with 6.06m on countback, then lost to Marestella at Imus 6.11m to 5.80m. And at Pasig managed only 5.67m.

Alexie Caimoso who has qualified for SEA Games in Heptathlon leaped 5.59m for t third and Abcd Agamanos the 19-year-old improved her leap from 5.47 to 5.51m.

The SEA Games standard is 6.15m, and only Marestella has achieved this with 6.15m during the qualifying period at the SEA Games 2019 when she was 4th on Countback. Khay Santos leaped 6.06m which was 9cm below the bronze standard. Marestella Torres – takes the win at almost 41 years of age

‘The Grand Old Dame’ of Philippine Athletics.
Marestella Torres at almost 41 years of age beat every single one of her opponents in the field of 10 athletes at the Milo PATAFA SEA Games Trial at Imus earlier this morning to secure the victory on her second jump.
Torres bounced back despite calve injuries and a surprise first-ever loss to Katherine Khay Santos at the Ayala Philippine Athletics Championships in Baguio losing to Kath 6.06 to 6.06 on countback.
This time she had to cope with coming off a calf muscle strain yet was able to extend her season’s best to 6.11m, just outside the SEA Games bronze qualifying mark of 6.16m. Santos was 2nd in 5.80m this time round. Marestella overcame competitors half her age.
She has been a member of the national team for 23 years (apart from a year off to give birth). Note Elma Muros was with the national team for 24 years but started at 14 years of age, she retired at 38. 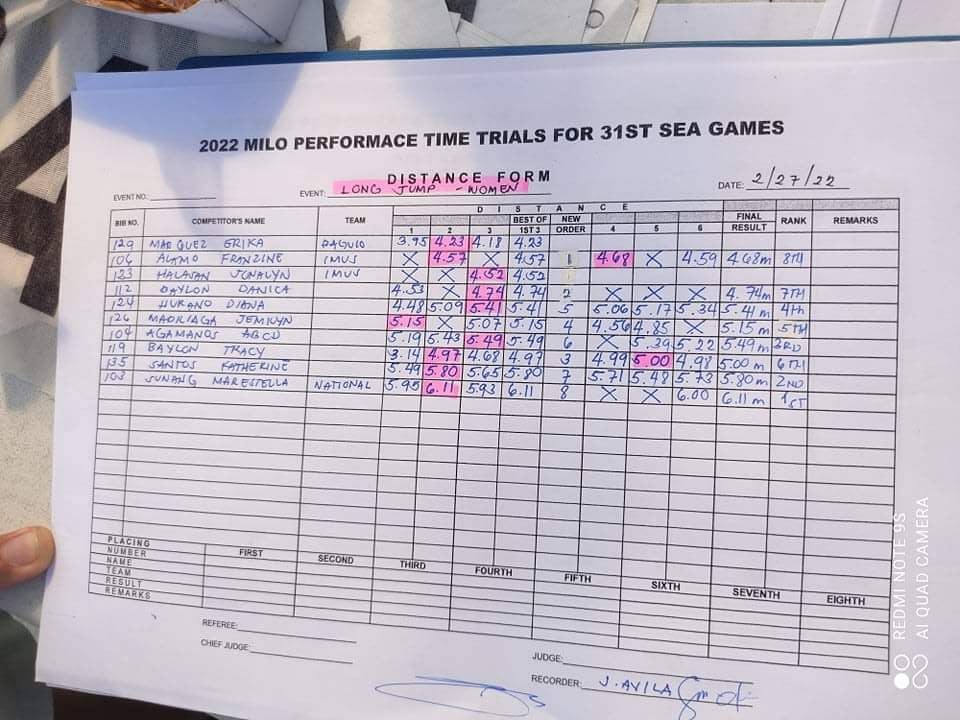 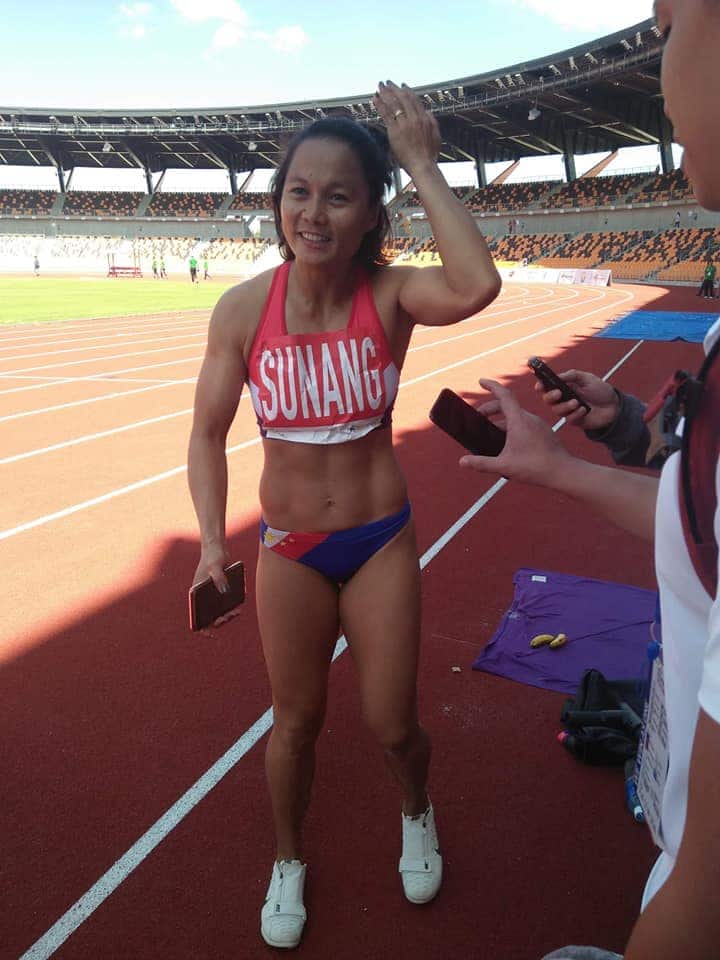 Both registered Seasons Bests (6.12m) and (6.05m) assuming they used a wing gauge in this event.

(If so, will need to update the 2019 SEA Rankings https://www.pinoyathletics.info/2019-sea-rankings-athletics/)

Torres, is 38 years old now, double the age of the 19-year-old Ngoc Ha of Vietnam.

Vietnam has a lot of depth and talent coming through in the years to come.

In the meantime, the grand old dame of Phi Athletics Marestella.

We strongly believe she will land a Top 3 finish at the SEA Games, with her strongest challenges coming from Londa, the favorite at this stage, and Bui, who is coming off an injury. 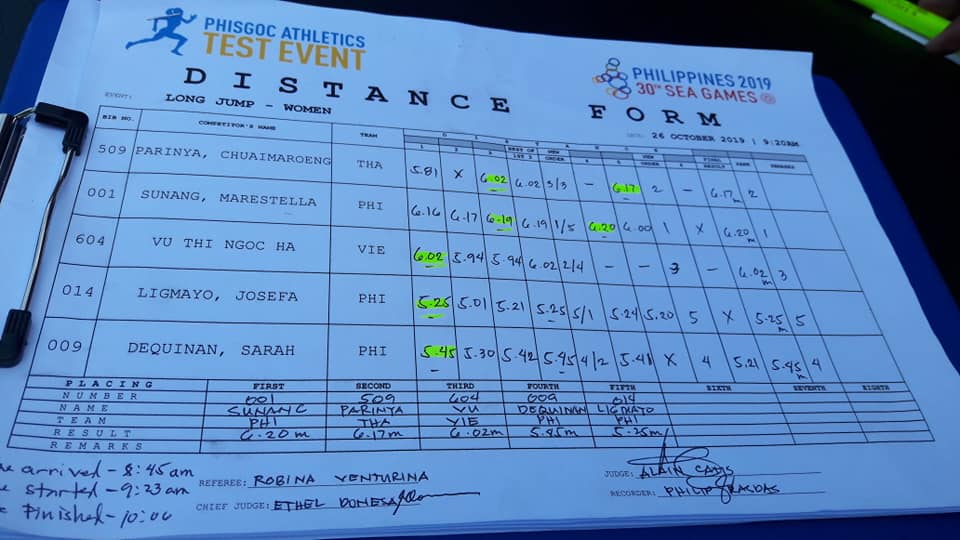 While it was a far cry from the 6.72, she had leaped in Kazakhstan.

Which was a new SEA and Philippine Record and had ensured her late qualification over the 6.70 standards to enter Rio.

While SEA Games Champion Maria Londa of Indonesia was slightly better with a 6.29m leap placing 25th, but still far from her Gold winning leap at SEA Games of 6.70m. Consequently, Tianna Bartoletta (USA) was the eventual winner with a leap of 7.17m ahead of Brittney Reese, who leaped 7.15m.

Marestella Torres-Sunang one week before the close of the Rio Qualifications on July 11.

Dug deep and delivered the greatest performance of her athletic career.

While at the age of 35, the mother of one set a career-best of 6.72m, which was also a National Record, South East Asian Record, and Rio Olympic qualifier (6.70m).

So this feat was done at the Kazakhstan Open in Astana on July 4, where she captured the gold.

The wind reading was +0.8, well below the legal limit of the IAAF qualifying standard of 2.0.

And Torres, once confirmed by IAAF, will have qualified for three Olympic games.

Marestella registered the 6.72m on her 6th jump after fouling her fourth and fifth.

While it was windy and rainy in Astana but this didn’t hinder Torres.

Furthermore, the rain, the anxiety of a last-minute qualifying, and the fact that age was not really on her side meant added to the climax.

Consequently, a dramatic twist when Tabal hit the standard and Torres lost her wild card spot.

While she fought back with a career-best at the grand old age of 35.

Along with Tabal and Eric Cray, she has qualified for the Olympics.

Clear signs she is far from done despite the odds put up against her continuing to push the boulder up the hill.

Ernest Obiena also has a strong chance to qualify in the Pole Vault competing in Europe. 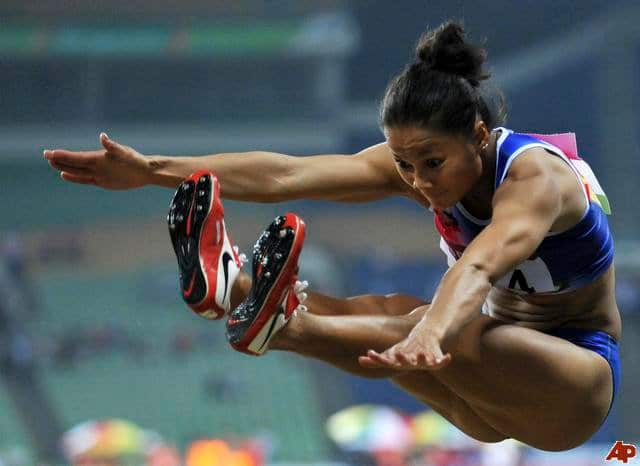 Hence, a surprise leap of 6.60m to take the gold in the women’s long jump at the 2016 Philippine National Open Championships in Pasig.

This mark puts Marestella only 10 centimeters away from the Rio Olympic Qualifying mark of 6.70m.

While Torres is now the closest to the Olympic qualifying in the athletics women’s for the Philippines.

And Her personal best of 6.71m, the South East Asian Record, was set at the 2011 SEA Games in Palembang, Indonesia.

Torres joined the national team as a teenager back in 1999, and her only pause was to give birth in early 2014.

Torres’s most recent performance at the SEA Games in 2015 was a bronze medal with a leap of 6.40m.

While 6.60m rates among one of the best jumps in her long career.

And it places her first in South East Asia for the first few months of 2016.

Also, Noor Shahidatun Nadia Mohd Zuki of Malaysia was second with 6.24m, and Kirthana Ramasamy was third with 5.80m. 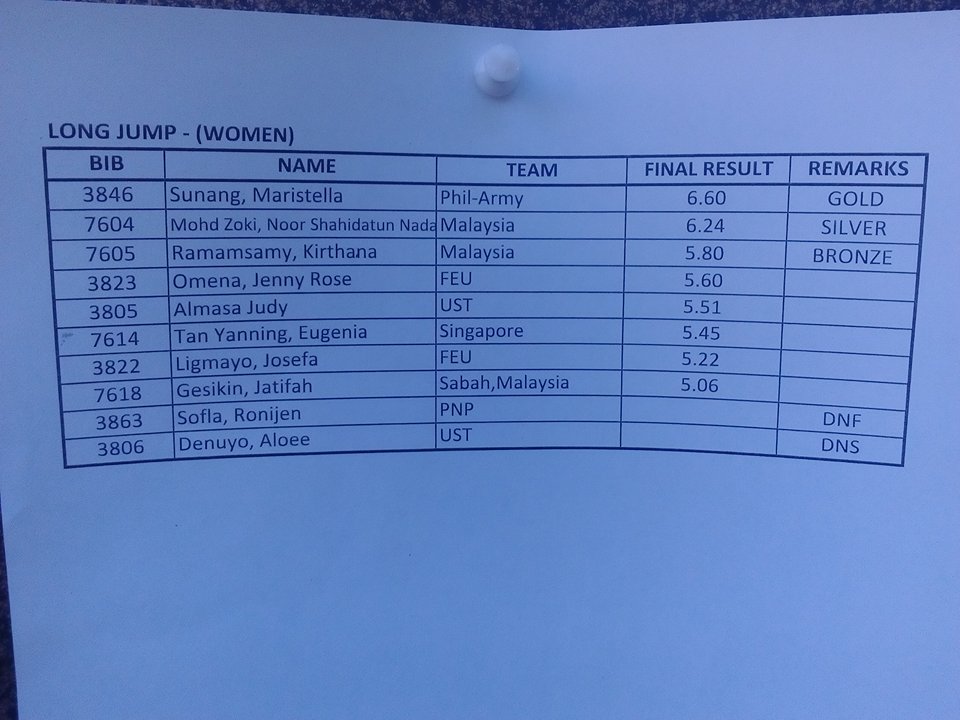 Marestella Torres medal would be the first for Philippines Track and Field in 20 years at Asian Games.

If Marestella Torres lands a medal in the women’s Long Jump at the Asian Games, it would be the first medal the Philippines has won in 20 years. At the same event in the Hiroshima edition, Elma Muros Posadas took the Bronze with a 6.41m leap.

If she takes it one further and lands the elusive gold, it would be the first gold medal for the Philippines Track and Field since sprint queen Lydia De Vega defended her 100m title in 1986.

Looking at the stats, Marestella, who is rapidly on the comeback trail, has a PB of 6.71m, set in the 2011 SEA Games.

Going into this competition, Marestella is ranked fifth, according to the IAAF Charts for 2014.

While Vietnam’s Bui Thi Xuan, who finished ahead of Marestella in the Vietnam Open, has registered 6.47m, Marestella has a season-best of 6.46m.

Marestella has the best career best than her younger opponents and will need to draw on this experience.

The winning leaps in the last 3 major Asian Championships were in the 6.50 range; a 6.50 plus jump would secure at least a medal, possibly a gold.

Marestella leaps 6.17m at a tryout for Asian Games.

And the 33-year-old mother of one fell short of the Asian Games fifth-place mark of 6.37m required by the POC/PSC Taskforce.

While the deadline for the Incheon meeting organizers is August 15

Cheered on by about 50 present, including POC Chairman Tom Carrasco and POC Sec-Gen Romansata Magat, as well as manager and mentor James Michael Lafferty.

Hence Marestella registered 5 of her 6 jumps.

Marestella looks like she is coming back into shape and should continue to improve this year with a few technical improvements here and there.

Hildilyn Diaz is also scheduled to perform today in weightlifting in a special tryout organized by the POC.

Hildilyn lifted 224 kg for Silver at the SEA Games; however, it requires a lift of 225 kg today to go to Asian Games.

4 Ateneo athletes also competed at their own expense

Torres, also a former Asian champion, was delisted because of pregnancy.