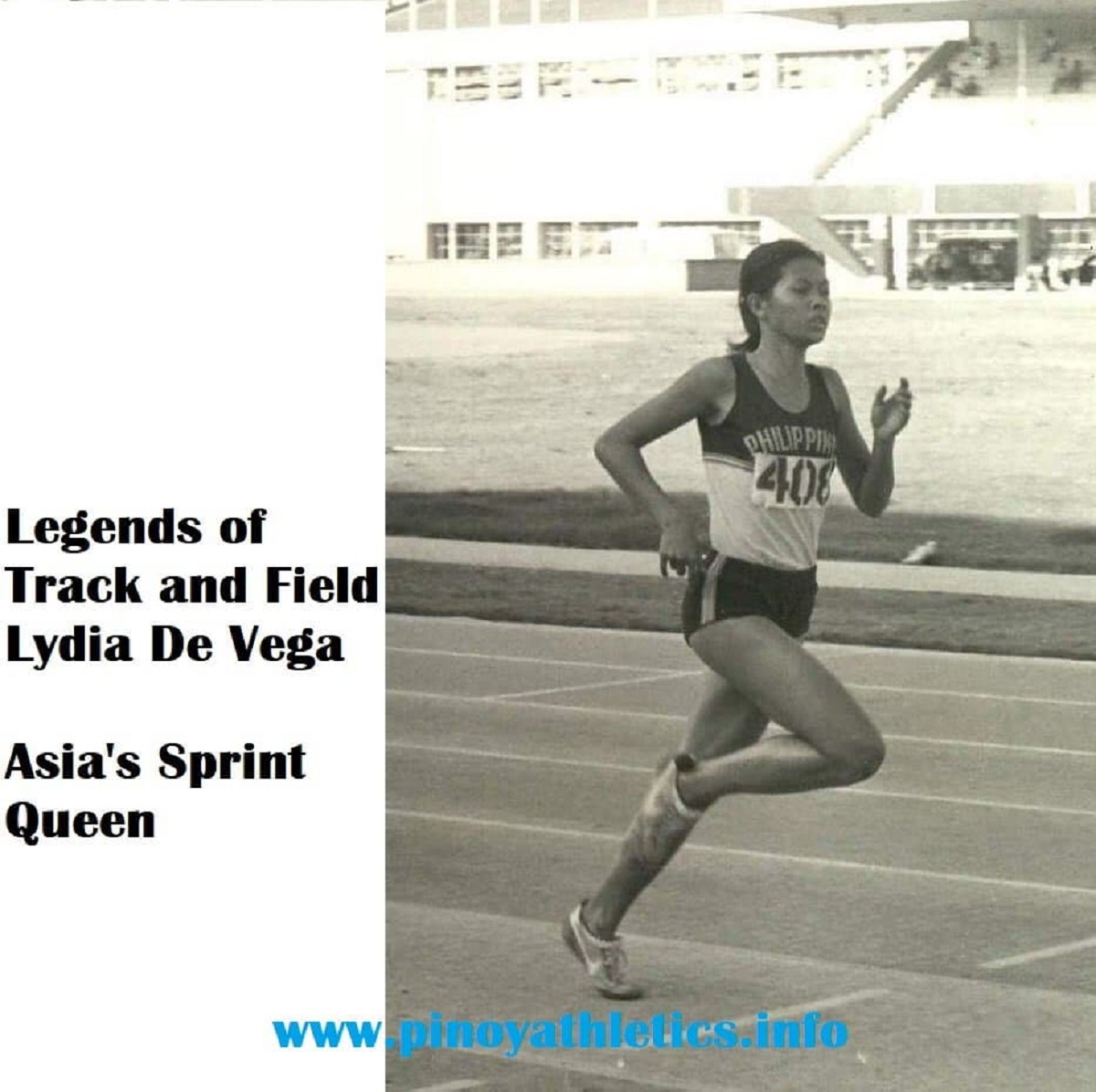 Sports has had a great impact in my life. It gave me the opportunity to bring prestige to my country and molded me into what I am today. I want my children to experience the same. During the 1980s, one of the essential chess pieces of the Gintong Alay program in Track and Field. Hence turning the Philippines into a superpower in Asian Track and Field and inspiring national pride in being Filipino.

Before Gintong Alay, De Vega was guided by her father, Tatang De Vega, with the program written by Claro Pellosis. But after 1980, she was trained by Magno Santos with input from Australian Head coach Tony Benson.

And it was then bettered further by another Fil-Heritage sprinter Kristina Marie Knott near the end of 2019 with 23.07 and 23.01.

And her National and National Junior Record in the 400 stood from 1981 to 2013 until Jenny Rose Rosales broke it.

Due to her records’ Longevity, which lasted around 32 years on average, she is considered the best locally produced Sprinter the Philippines has ever had. She currently works as a kid’s athletics coach in Singapore.

This I learned from being an athlete; no matter what adversities atrocities towards my name, it will not stop me from becoming what I intend to be. 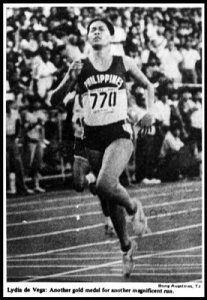 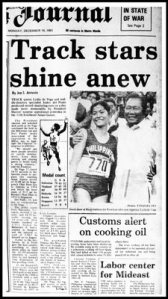 Lydia De Vega was born on December 12, 1964, in Meycauayan Bulacan. Her father was the late Francisco’ Tatang,’ a policeman whose rigid coaching would turn De Vega into our country’s most successful and well-known female track and field athlete.

Her mother, Mary, gave Tatang ten children. Hence Lydia first found her talent for sprinting at the age of 12 and would enjoy a career that spanned 17 years.

Track Queen Lydia De Vega from the Philippines During all the Asian Games in Delhi, sheer joy and deep disappointment were never as closely connected as after the 100 meters victory of Lydia De Vega.

While The 18-year-old PE student and film actress from the Philippines had won the final comfortably and unchallenged in excellent 11.76 secs, especially relevant was she had injured herself after breaking the tape.

Hence a pulled muscle prevented her from also participating in the 200 meters.

Hence, a dream had become true when Lydia crowned herself as the fastest woman in Asia.

The dream of a 14-year-old schoolgirl who had started to compete in Track & Field meets with a promising 27.5secs for the 200m and the silver medal in the Philippines National Junior Championship. And who added fourth place in the 100m to this success.

That was four years ago, in 1978. Only one year later, in 1979, at the age of 15, Lydia De Vega already represented her country in the 3rd Asian Track & Field Championship in Tokyo.

With a leap of 5.47 meters, she came in 7th in the Long Jump competition and carried home a bronze medal when she came third in the women’s 4x400m relay Lorena Morcilla, Carmen Torres, and Myrna Ayo.

But Lydia also won a silver medal in these Games when her 4x100m relay came second to Malaysia. So, in conclusion, the Games already showed very clearly that Lydia was always in danger of being overburdened with too many races in just a single meet.

Also, to cut down the competition program, she resigned from taking part in the Long Jump after taking the national junior meet title.

Furthermore, young Lydia made the news headlines when she won 200m and 400m in the first-ever ASEAN Cup in Jakarta with 24.53 and 55.83 seconds, respectively.

With two silver and one bronze medal in the 4th Asian Track & Field Championship in Tokyo, Lydia De Vega had a flying start to the 1981 season. With a time of 55.39secs, she was second to Japan’s Yunko Yoshida in the 400 meters. While in the 200m, she clocked 24.54secs to take Emiko Konishi and Tomi Ohsaka of Japan.

Yet her silver came in the 4x100m relay in which the Philippines team was placed second behind Malaysia following the disqualification of the winning Japanese team.

At the end of the 1981 season, Lydia De Vega became the 11th SEA Games’ undisputed star in Manila. Consequently, she secured the gold medals in the 200m and 400m with an outstanding 23.54secs shorter distance. ( only Chi Cheng was faster in Asia ever) and with 54.75secs in the metric quarter-mile (400m junior Record broken three times, 200m still stands)

Silver medals in both relay events completed her success again showed the danger of being burdened with too many races on the same occasion.

Consequently, after leaving school and taking up PE studies at the Far Eastern University in Manila., Lydia De Vega also started an exciting job as a film actress.

Therefore, first in a movie showing an athlete’s slow but steady progress from the very modest beginnings at the grassroots level to setting records and winning gold medals.

Hence most of all, Gold medals were, of course, also on Lydia’s program for 1982.

Also, winning bronze with her team in the 4x400m relay, she had to cancel her participation in the sprint relay due to a slight injury which she got in the 400 meters.

Hence this was only three weeks before the 9th Asian Games in New Delhi, the Indian capital.

Both of her opponents never were able to endanger the fleet-footed track queen from the Philippines.

Therefore due to new pains caused by an old injury, Lydia had to cancel her participation in the 200m after her triumphant showing in the 100 meters.

She became one of very few Filipino Track and Field athletes to win the Asian Games and Asian T&F titles.

For her efforts that year The Philippines sent Lydia De Vega to the World Championships in Helsinki, Finland. She finished fifth in her heat in 11.74 (+2.1) and then landed last in her quarter-final in 11.90 (which was won by Germany’s Marita Koch, with none other than Jamaica’s long hauler Merlene Ottey placing second).

Lydia represented the Philippines in 1984 at the Los Angeles Olympic Games. She made the quarter-finals again at a major championship, finishing 6th in 11.97 in the quarters.

At the Asian Track and Field Champs, De Vega ended up with the bronze to PT Usha the following year.

The following year, however, after bypassing the SEA games, she defended her Asian Games title in Jakarta, Indonesia.

“Opo nga, mabilis siya, but you know, I ran and I fast:” By Lydia de Vega after beating PT Usha of India in the 1985 Asian Games.;

De Vega continued her winning form with a Philippine and still standing SEA Record in the 100m at the SEA Games, clocking 11.28, and reclaimed the 200m title in 23.57.

As noted above, a false start distracted De Vega from the task of breaking the Asian Record of Chi Cheng.

She attended her second Olympic games in 1988 in Seoul, Korea, her 11.67, this time not good enough to qualify past the heats.

De Vega would take the next few years off to raise a family.

Her first daughter Stephanie was born in 1989 (2 other children followed, one tragically killed in a jeepney accident in 2001).

Diay brought home over 40 gold medals from international meets in a career that spanned a decade and a half. However, she remains the country’s greatest ever female sprinter, with her 100-200-400m marks still standing.

The Contributions of her late-father, Francisco ‘Tatang’ De Vega, helped shape and develop her to the very best of her abilities. Her feats in Track and Field captured the hearts and minds of the Filipino people.

“Sports has had a great impact in my life. It gave me the opportunity to bring prestige to my country and molded me into what I am today. I want my children to experience the same.”

The main content of this article is from the site below. However, I did add and modify some of them.

Update: With Kayla Anise Richardson now in the seniors and unable to break De Vega Junior 200m Record. The current crop of Junior Females is now even further away. The Record has now stood for 37 years!

It was here that De Vega won the 200m as a 17-year-old. De Vega resurfaced again when a newspaper falsely reported that she had died. But, of course, this is not true, and She is currently coaching in Singapore.

Meanwhile, Zion Corrales-Nelson clocked 24.26 at SEA Games, finishing fourth, and has a PB of 23.74.

The Duo of Richardson and Nelson have represented the Philippines already in several international meets; they are Filipino Heritage athletes (athletes with a Filipino Parent). And they are both based in the United States.

They were born in 1998, so they would only have until December 31 to eclipse De Vega Junior 200m Record.

Performing below expectations at the 2017 SEA Games in their individual 100 and 200-meter events. Nelson and Richardson. Joined Kyla Richardson and Eloiza Luzon to take the Women’s 4x100m National Record in 44.81.

Once dubbed as the fastest woman in Asia, Lydia De Vega dispelled rumors circulating on social media that she had passed away.

In a conversation with INQUIRER.net Wednesday night, De Vega said she was surprised about her fictional death and felt sorry for whoever wrote the malicious article.

“I don’t even know why someone would write such thing,” said De Vega in Filipino. “This kind of joke is not funny. I hope this serves as a lesson that he won’t do this kind of thing again.”

The two-time Asian Games gold medalist scoffed at the hoax, which she found out when her children called her Wednesday morning to check up on her.

“I read the article, and it’s so fake. Because it said that I was rushed to V Luna (the avenue where the AFP Medical Center is located). But I’m not even in the Philippines,” said De Vega.

Lydia De Vega is now based in Singapore as an athletics coach for students.