I was given the chance to Interview SEA Games Sprint Queen Le Tu Chinh with her long-time coach Huong Nguyen. This was especially a challenge as neither of the pair spoke English, and I do not know Vietnamese. Hence a friend Mr. Vinh Khang kindly volunteered to be the translator for the closed ZOOM Meeting.

8 Questions were asked which led to broader questions I had prepared myself from Research plus a further 3 questions came from a Malaysian and Australian coach.

Chinh Given a Chance

Nguyen had coached Chinh from the Age of 10. She was working for the city of Ho Chi Minh and they went around schools looking for athletes. She had met Chinh when she was 5th Grade in District 8.

“Chinh was very little and thin when I first saw her”. Said Huong.

She had not really identified anything special about her as an athlete at that point. Chinh had lost her mother at an early age and was from a poor family. Huong just wanted to give the young girl a chance of a better life through sport. In the years that followed Nguyen was more than just Huong coach but played the role of a surrogate mother. What makes Chinh a strong athlete is she always tries her best in training and competition. She always completes all her training. And does not make excuses. She always sets and has a clear view of her goals. She tries harder to reach her goals.

Chinh’s weaknesses are her technique is not yet fully developed but together we work on it day in day out to improve that aspect of her being an athlete. She also sometimes gets very emotional during bigger meets such as the Asian Champs and Asian Games which can be overwhelming for her at times.

But during meets, she usually rises to the occasion and does her best against every athlete she faces regardless of who she is up against.

“She shows a coal face and fires up when she needs to”. Huong expressed which is basically Chinh’s concentrated expression when she puts herself in the zone of just focussing which all sprinters know about.

As Vietnam’s fastest woman Chinh has a male sprinter as a pacer to help challenge her in training to reach that next level.

We have been working on Chinh’s strength which is also something she needed to work on. Her power clean is 80kg. (Melissa Breen of Australia who timed 11.12 had an 85-90kg power clean). 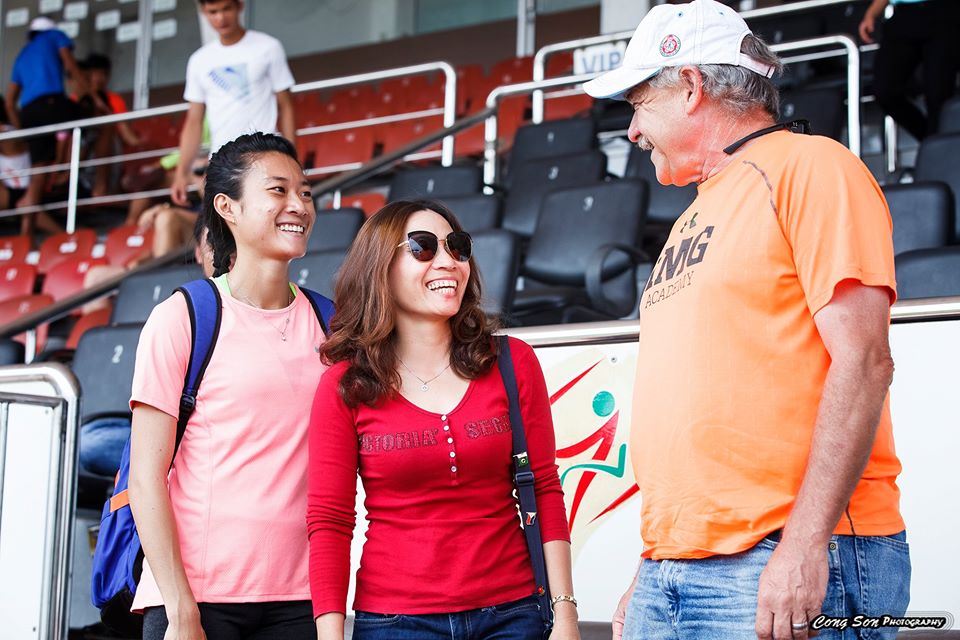 Although Chinh has only ever been coached by Huong since she started.

Huong and Chinh had the opportunity to work with one of the world’s best sprint coach American Mr. Loren Seagrave. Loren has worked with several Olympic and world gold medallists. Before Loren was with the IMG Sports Academy in Florida, United States. Chinh and Huong were able to gain valuable experience working with the veteran coach.

“It was an unforgettable experience working with Loren one that we will treasure for the rest of our lives. The Training system is very different from what we were doing in Ho Chi Minh City. Modern training methods, good healthcare for athlete recovery, and lots of resources equipment that can be used.” – said Huong.

“We don’t do much of that as we don’t have that type of equipment available in Vietnam. Such as high speed treadmills etc.”

They did use an Overspeed cord which is one person pulling and being pulled Vietnam has that and speed sleds.

The Road to the SEA Games Championship

Later that year in the 2014 ASEAN School Games in Marikina. I the author remember this meet well as I selected and managed the Philippines Athletics team at this event. I didn’t know who Chinh was at the time. Chinh took the bronze medal in the 200m Dash. While another Vietnamese Ha Thi Thu won the 100m Dash. Chinh at this stage was not even the best junior in Vietnam.

In 2015 Chinh took the Gold medal in both the 100 and 200-meter dash at the ASEAN School Games in Brunei. Then 18 Chinh established herself as not just Vietnam’s top Junior sprinter but began to start to fill the void that was left after the retirement of 4x SEA Games Champion Vu Thi Huong. The Vietnamese had not medaled in the 2015 SEA Games in Singapore in the 100m Dash and had only taken bronze in the 200m.

In 2016 Chinh home city Ho Chi Minh hosted the Asian Junior Championships. It was a huge breakthrough year for Chinh after a disappointing 4th in the 100m at these games. She somehow managed to crown herself Asian Junior Champion in the 200m defeating the powerhouse athletes from China and Japan.

It was spurred off this win that Chinh finally became SEA Games Champion in 2017 at her first SEA Games winning both the 100 and 200m Dash in Kuala Lumpur.

In 2019 SEA Games Chinh was well beaten in the 200 Meter Dash by American born sprinter Kristina Knott who represented the Philippines. Knott went onto break the SEA Record with a 23.01 clocking. Knott did so in front of a 3000 strong home crowd at the world-class New Clark City, Philippines.

In what to most would be a psychological blow to most Chinh who had been the reigning champion coming into these games was forced to regather her thoughts and composure. In what was a huge morale blow after finishing so far behind Knott in the 200m. Some 3-4 meters behind in fact. Was really hurting psychologically from the shock loss.

What lay ahead in defending her 100 meters titles in the day to come would be an uphill battle of the mind. In the 100 meter heats, Chinh opened with a season-best of 11.61 to win the first heat. But Kristina Knott bulldozed the second heat in 11.45 (just .03 off her best time at the Asian Grand Prix earlier in the year). It seemed like Knott had the 100m in the bag as well.

The final came the next day and huge anticipation was on Knott having won the SEA Games 200m title. In the final Chinh was out like a rocket putting almost 3 meters on Knott by the halfway mark. Knott was forced to work hard as she started to reel Chinh in. Knott fought hard and almost caught Chinh on the line. But Chinh arm went over the line first and a teary-eyed Chinh retained her SEA Games 100m title.

The author watched near the finish line as an emotional Chinh in tears ran over to embrace her coach Huong.

When asked about Knott. Chinh smiled and couldn’t stop giggling.

“She is a very powerful athlete who trains (went to college) in the best track country in the world America. It’s great to have a strong opponent like that at the SEA Games cause she keeps us from slacking off in training and we work very hard to get better.” Chinh has not yet competed at the world or Olympic level. The first goal in 2021 is to win the 100 and 200m titles when Vietnam will host the SEA Games.

Of course, we would like to better at the Asian/Asian Games  Level (where Chinh has made finals).

While most countries have been strongly affected by the COVID. Vietnam was lucky enough to have no deaths and few cases and it only really lasted a few months.

“We kept training normally through COVID and we did not let it disrupt our program at all. Every day is important as we the Vietnamese people will be depending on us as the Pride of Vietnam to deliver at the 2021 SEA Games” Chinh beat relay teammate Ha Thi Thu who clocked 7.61 secs, with newcomers Bui Thi Nguyen and Nguyen Van also impressive in the Junior Division. She did not have to run the heat and went straight to the final as per her coach Huong Nguyen. Chinh will run the 100 and 200m at this event in the next few days.

“We are working towards it” said Huong Nguyen who has coached Chinh since she was 9 years old.

Chinh From the Beach to the Track

Meanwhile, in the Women’s 2016 Asian Beach Games Champion Le Tu Chinh of Vietnam continued her wonderful season, a consistent top-three placer in the 100m Dash during the

Asian Grand Prix series in China for a few months. The 20-year-old Chinh improved her mark from 11.67 to 11.47 to win the Thai Open. Chinh win takes the season lead for the 100m Women’s.

Coming in second was Malaysia’s Zaidatul Husniah Zulkifili this time with a legitimate PB of 11.65, breaking her time of 11.67 from Kosanov last year. Zulkifili mark is the #2 in SEA this year in this event. Zulkifili had run faster but both times were disallowed an 11.36 (2.5) in Pretoria and 11.45 in South Africa also were both disallowed.

Defending SEA Games Champion Kayla Richardson (Philippines) who has been running 400’s is still yet to register a 100m time this year. But will defend her title.

It will be an interesting Women’s 100 Final in Kuala Lumpur in a few months as 3 women including Zion Corrales-Nelson of the Philippines have all ran below the winning time of 2015 SEA Games 11.76.

Le Tu Chinh of Vietnam SEA Games Champion in 100m and 200m, who was also the surprise Asian Beach Games winner last year in 60m. Wound up second in the 100m.

Chinh came into the competition with a 7.41 PB and reduced that to 7.39 in the Heats clocking the fastest qualifying time and then 7.36 in the Finals. And the Games record belongs to her fellow Vietnamese 4 times SEA Games Champion Vu Thi Huong with 7.24.

A good run for Chinh as she was up against the 2017 Asian 100m Gold, Silver and Bronze medalists. The win went to Zyabkina of Kazakhstan in 7.32, with Chinh beating out Safronova (Kazakh) and Dutee Chand. Which now shows a lot of promise for the 20-year-old Chinh at Asian Level.

For More Updates on the Philippine Team Check Here.