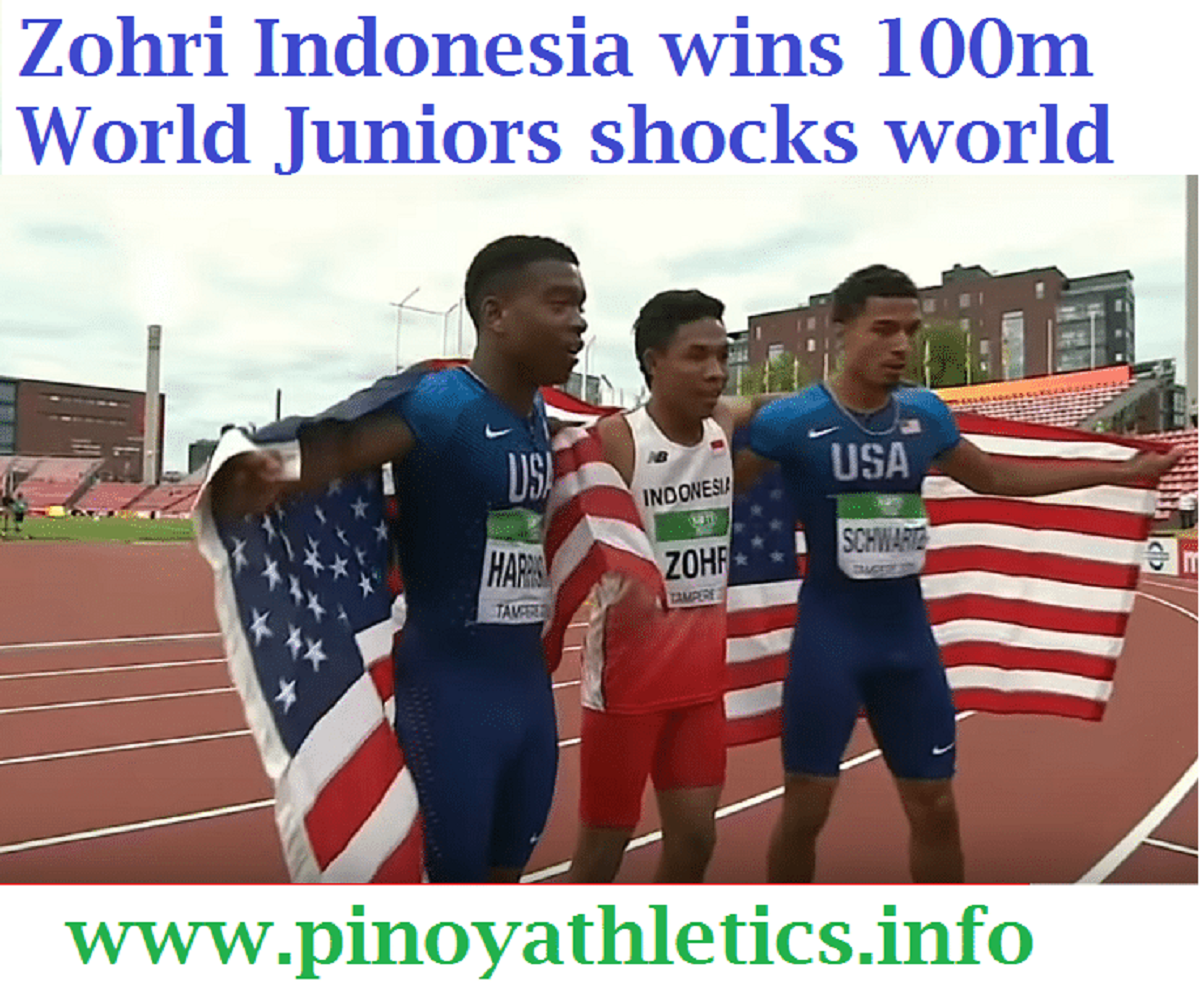 Lalu Zohri continued to lower his 200 PB with a win at the Indonesian nationals of 20.81. The mark again broke the Indonesian Junior record he set a few days ago of 21.12. Zohri time closed in on the 200m National Record of former Multiple SEA Games Gold Medalist Surya Agung Wibowo (20.76, 2007). He already improved on a number of occasions the former 100m record of Agung Wibowo (10.17). Zohri ran the 200m in the Junior age category as he is born in 2000. On the instructions of his Coach as a tune-up for the World Champs where he will run the 100m next month. The senior 200m was won in 21.26.

2018 World Junior Champion and SEA Record Holder Lalu Zohri of Indonesia who has a PB of 10.03 in the 100m.
Cruises through the 200m Heats of the Under 20 Men’s 200m (today August 3 at the Indonesian Nationals. Zohri (in blue)clocked 21.14 (-0.2). It will be interesting to see what Zohri will time in the finals. The athlete in green in the same heat was #2 in 21.85. Showing Indonesia has no shortage of talent.
Zohri time was a new National Junior Record. The previous mark of 21.27 was set by the 2011 SEA Games Champion Franklin Burumi (100/200). The Indonesian record for Open is 20.76 by Surya Wibowo.
The finals are tomorrow.
Zohri who has qualified for the world champs in the 100m (10.10) and Olympic games (10.05) after his splendid run against Justin Gatlin on the world circuit. He was advised by his coach just to run 200 as preparation for World Champs.
It has long been touted that Zohri will do the double at the 2019 SEA Games in Manila. The 100, 200, and also he has a strong cast of sprinters which Indonesia seems to have more than we know about in the 4×100.
21.12 Ranks Zohri #4 in South East Asia for this year already. According to Adriansprints.com the last time Zohri ran a 200 in 2017 he clocked 21.58 (against the wind)
Siripol Punpa of Thailand (20.76) and Russel Alexander Nasir Taib of Malaysia (20.77) have the two leading times this year. According to Adriansprints.com the last time Zohri ran a 200 in 2017 he clocked 21.58 (against the wind).
SEA Defending Champion Trenten Beram of the Philippines took the gold in 2017 with 20.84. 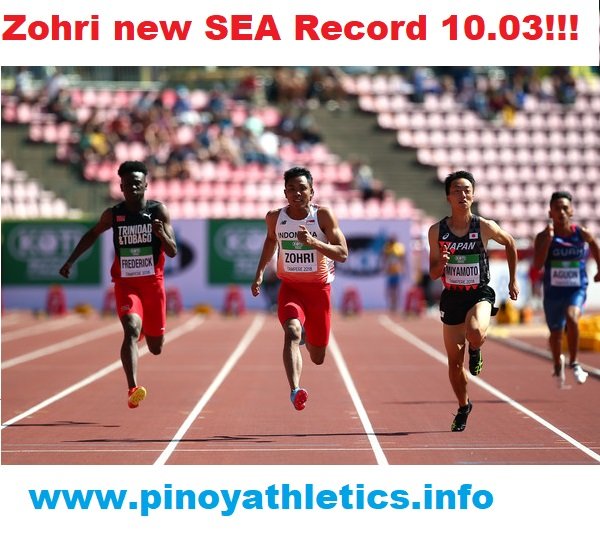 Zohri of Indonesia clocked an impressive 10.03 to improve on his Southeast Asian record of 10.13 set at the Asian Games.

He finished behind World Champion Justin Gatlin, 37 (USA) who won at 10.00 and also won this event last year. Asian Champion Yoshide Kiryu (Japan) who beat Zohri at the Asian Championships in Doha last month, barely held on with 10.01. It was a blanket finish with the rising Zohri nearly closing down Gatlin and Kiryu. Zohri the 2018 World Junior Champion is born in 2000 so he is still a junior athlete.

The middle of the track saw the Big American Gatlin running a neck to neck battle with Kiryu just holding on. With the fast-finishing Zohri storming down the track in Lane 9 to take third. 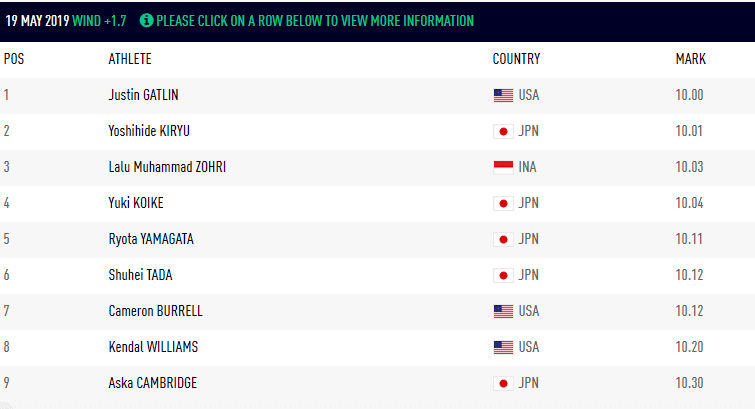 Zohri who clocked 10.18 to win world Juniors, broke country man’s Agung Wibowo SEA Record (10.17) with 10.15 at Asian Champs semifinals, improving this to 10.13 in the Finals to gain the silver. And now he shaved off another .1 seconds.

The question is will Zohri double at SEA Games. In the 100 Meters his time of 10.03, is a commanding .31 or 2 meters in front of his nearest SEA Rival Jirapong Meenapra of Thailand in the 2019 SEA  Rankings. Possibly with 10.0, 20.5 to win the SEA Games would be more of a jog for Lalu Zohri.

Zohri was just .06 seconds off the World Junior Record of Trayvon Bromell (USA) 9.97 (1.8) set in 2014 at the NCAA Div 1 Championships in Eugene. Zohri moves up to the #6= Best time ever by a junior athlete. The mark also meets the 10.05 qualifying for the 2020 Olympics in Tokyo and it also means he qualifies for world champs in Doha. 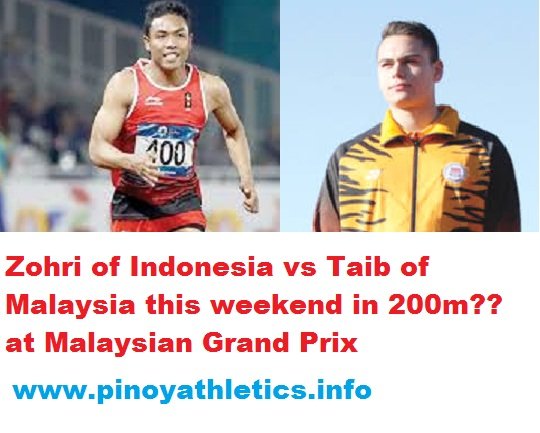 Who else wants to Russel Taib vs Lalu Zohri. I bloody well do. This weekend is very busy it was the Singapore Open, The Jatim Open in Indonesia, and the Malaysian Grand Prix. In recent developments, the Indonesians were sited at the last minute with there 2020 Olympic potential athletes arriving in Kuala Lumpur for the Malaysian Grand Prix. Among the crew was World Junior 100m Champion Muhammad Lalu Zohri who has a personal best of 10.18.

Still only a junior at 19. Zohri is the fastest 100m man in South East Asia but he hasn’t run a 200 for about 3 years but did time 21.74 as a 16-year-old when he was a 10.8 guy. So the guy knows how to run a curve but he is much faster now. So by this estimate, he can probably run around a 20.50 but might need a few races to hit that time. If anything Zohri might be the man to challenge another young man who came on the scene last year as well.

Australian-based Russel Taib whose recent run of 20.77 at the Queensland Classic last weekend was not only a Malaysian National Record but the fastest time in South East Asia in 10 years. With Supachai Chimdee of Thailand clocking 20.68 (Thai National record) as a junior back in 2009.

While Zohri has just been mainly focussing on the 100m. The question is will he now step up and take what seems to be a vacant 200m title. With Defending Champion Trenten Beram of the Philippines seemingly inactive in the sport, as he has not raced since Asian Games last August.

One thing is for sure the Malaysian Grand Prix is the premier meet in South East Asia this weekend with nothing but the best of the best of what South East Asia has to offer in a large number of events. Also, possible lineups for the 200 include Khairul Jantan the SEA Games 100 Champion (20.90 200), and Aqil (21.01).

Lalu Zohri sent ripples through the athletic world as he won Indonesia’s first global title at any Track and Field meet. On a breezy Wednesday afternoon, the Asian Junior Champion steamed ahead of the much favored Americans to claim the gold at the World Junior Championships.

Lalu Zohri stopped the clock at 10.18 to claim the gold medal at the World Junior Championships in Tampere, Finland. This is the first time a Southeast Asian athlete has won the 100m at the World Juniors. A few years ago Supanara of Thailand had won the Long Jump at World Juniors then becoming Thailand’s first-ever world level medalist.

He had won his heat in the heats the previous day with a time of 10.30. He had the fastest time. Some experts felt that the other athletes were holding back and Zohri may not last the rounds. In the Semi-Finals, there may have been signs of faltering. In Semi-Final #1 He finished behind the meets fastest man Anthony Schwartz who has a PB of 10.09. Schwartz clocked 10.19 and Zohri timed 10.24. He qualified 4th to the final. Its important note though 10.24 was still matched his Personal Best, South East Asian leading time, and National Junior Record.

If for that like hiccup or falter against a class athlete like Schwartz. He sure did get the better of the Americans and Jamaicans in the final. Zohri steamrolling a class field with the Americans gasping for air in silver and bronze in 10.22. He won from behind to run over the top of the Americans at the edge of the field in Lane 8. Zohri who turned 18 in July, Schwartz was totally left stunned having the world lead and undefeated in 2018 in the 100m.

Zohri clocked 21.74 as a 16-year-old. Before shifting over to the 100m. He sent waves across the athletic world when he clocked 10.25 at the Pre-Asian Games in Jakarta. Zohri was helped by Harry Mara including training and competing against top athletes in Los Angeles. Mara the coach of World Decathlon Record Holder Ashton Eaton (USA) has really leveled up Indonesia’s athletic program.

Zohri surprisingly with the absence of Abdul Hakimi-Brown of Japan won the 100m at the Asian Juniors a few weeks ago in Gifu, Japan. Leading onto his big win at the global level.

His mark of 10.18, is only .01 seconds off the National Record of Surya Agung Wibowo set in the 2009 SEA Games in Laos. With the fastest time in South East Asia in 2018, he is expected to challenge defending champion Khairul Hafiz Jantan of Malaysia who has an identical PB of 10.18 from 2016. Jantan best for 2018 is 10.34 at the Malaysia All-Comers back in March.

This question is will Zohri who was a former 200m runner, step up to 200 at the SEA Games in the Philippines next year?

It will give Indonesia a much stronger 4×100 with Zohri and Dewa Mudiyasa joining Yaspi, Fadlin, and Iswandi in the squad at the Asian Games next month. Where Zohri will also contend in the individual 100m as well.

Zohri is expected to be hot on the mind of US  Div 1 College recruiters and sponsors after this. Perhaps UCLA?

While already the fastest man in the senior ranks for 2018 in South East Asia. Consequently, Mohammad Lalu Zohri crowned himself Asian Junior Champion in the 100m Dash at the 2018 Asian Junior Championship in Gifu, Japan today.  And the 18-year-old Zohri is the new kid on the block of southeast Asian, and maybe even continental level athletics.

While none more shocked perhaps than the Japanese hosts of the bi-annual meet. Most noteworthy is that they did not field Japanese/Ghanaian sprinter Abdul Hakim Sani Brown  the 2015 World Youth Champion, who at 19 would have still been eligible for these championships. Especially relevant is that Sani Brown has a PB of  10.05 and 20.32 from l last year. While he has run a 10.46 and wind-aided 10.19 (2.1) this year. Yet he was not entered by Japan in either the 100 or 200.

In his absence even though he may have still triumphed over Sani Brown. Zohri clocked 10.27 to win the Asian Junior title. While just outside his 10.24 PB set in the heats of the Pre-Asian Games in Jakarta back in February. And it was also just .01 off the Meet Record of 10.26 set by Li Tao of China 32 years ago.

While Zohri clocked 10.44 into a -1.9 headwind yesterday in the heats to lead the qualifiers comfortably going into the final.  Also, Daisuke Miyamoto Japan’s #2 was out fastest and led halfway, but Zohri strong legs ran him down.

Hence Miyamoto settled for silver in 10.35. While Miyamoto has a PB of 10.26 and has run a windy 10.20 this year. And Muhammad Fakhri Ismail of Malaysia took bronze in 10.46 equalling his PB.  Also, another southeast Asian athlete Chayut Khongprasit of Thailand was seventh in a 10.59 PB.

While Zohri will not contest the 200m. And his next stop is more than likely the World Juniors in Finland next month where he will have a good chance at making the top 8.

Zohri runs at the Asian Juniors was the best ever finish in this event by an Indonesian. While Surya Agung Wibowo who holds the Indonesian and South East Asian Record in this event took Silver in 2002 with a time of 10.81. 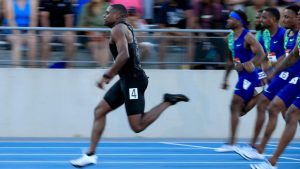 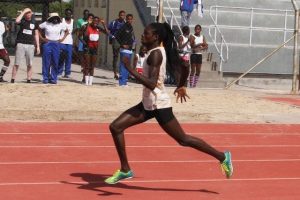