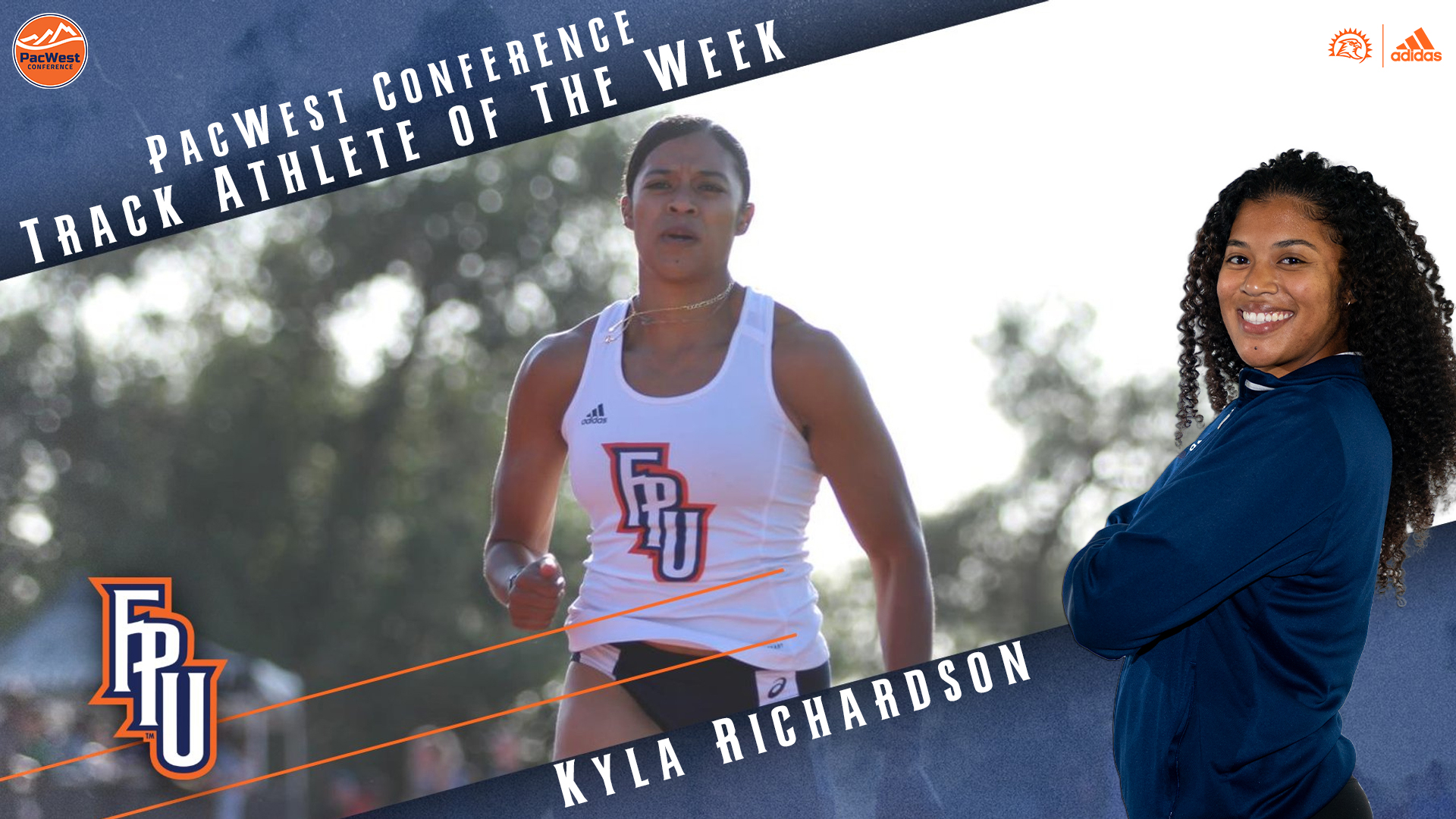 I will be so stoked if she finally becomes SEA Games Champion.
10 years ago Jeffrey Richardson contacted me via email regarding his two twin daughters who were 14 years old via PinoyAthletics.

And I would love to see after so many people said she was an early bloomer, she was too fat to be a sprinter and she will never make it.
Yet here we are today, the journey nearly coming full circle.
While Kyla Richardson is doing extremely well none of the PATAFA coaching staff can be given credit for her performance here or after SEA Games in individual or relay events.
She is currently coached by former Jamaican Olympian Robert Foster at Fresno Pacific in California. Before that, she had worked with Jon Gilmer (Academy of Speed), Carol Gilbert (USC), and Gary Cablayan (Evo Sports).
Kyla did not participate in the 2013 SEA Games, due to only being 15 at the time.
In the 2015 SEA Games, she didn’t do too well in her First SEA Games in Singapore hopping on an injured hamstring on the 3rd leg of the 4×100 that wound up 6th.
Her twin sister Kayla at 17 years of age was the surprise winner in the 100m and took silver in the 200m.
At the 2017 SEA Games Kyla was part of the 4×100 that took the Bronze, and in the 2019 SEA Games progressed to silver.
Both Kristina Knott (Philippines) and Le Tu Chinh (Vietnam) were out of the SEA Games due to injuries. Knott is the SEA Record Holder and 200m Champion with plantar fascitis and Le Tu Chinh of Vietnam is the SEA Games 2017-2019 100M Champion.
With no individual medal yet at SEA Games the door is wide open for Kyla Richardson to finally become SEA Games Champion.

Kyla Richardson clocks wind-aided 11.39 the fastest 100m Women’s time in South East Asia 1 month before SEA Games.
Kyla Richardson after her magnificent 23.22 (3.1) last week at Claremont has followed up with another wind-aided best time of 11.39 (+3.5)
With 1 month before SEA Games, the 23-year-old Richardson who runs for Fresno Pacific is in the shape of her life. Her time is the fastest in Southeast Asia in 2022 under any conditions. Richardson’s time of 11.39 clocked the Bryan Clay Invitational in Los Angeles she finished ahead of Michelle Harrison (Saskatoon) at 11.47 and Elena Carter (Montanna State) at 11.48.
The fastest wind-legal this time for 2022 comes from Husniah Zulkifli of Malaysia the 2017 SEA Games 100m Women’s silver medalist who clocked 11.62 on 26th March at the Malaysian Allcomers in Kuala Lumpur.
The clock stopped at 11.34 and then was rounded up to 11.39.
Kyla Richardson will be lined up next month at SEA Games in the 100 and 200 with the Philippine Record Holder in both events Kristina Marie Knott. Kyla has never won an individual medal at SEA Games but took silver in 4×100 in 2019 and bronze in 4×100 in 2017. Her twin sister Kayla was the 2015 SEA Games Champion in 100m.

Her time albeit wind-aided was just .04 second off the meet record. The time is well below Richardson’s personal best of 24.05. Kyla is still yet to legitimately break 24.00.

But her time of 23.22 is the fastest in South East Asia under all conditions for 2022. Kristina Knott the SEA Games 200m Champion and Record Holder ran 23.17 last year.

Kyla represented her school Fresno Pacific and is currently being coached there by Robert Foster who represented Jamaica in the 1996 and 2000 Olympic Games in 110 Hurdles.

Robyn Brown the SEA Games 400 Hurdles Bronze medalist clocked 23.75 (+3.1) to place 3rd her Personal best being 24.25 (+1.5) earlier in the year. Both Girls represent the Philippines through one Filipino parent.

Kyla Ashley Richardson continued her fine form; coming from behind to win the Hornet Invitational 100m in 11.65. Representing Fresno Pacific. The time albeit slightly wind-aided was just 0.1 outside her PB of 11.64 from the Kim Dunyst at Turlock on March 4.

Kyla Ashley Richardson took .01 off her Personal best with an 11.64 run at the Kim Duyst Invitational at Stanislaus, Turlock California on March 4. Kyla representing Fresno Pacific took the win over Raevyn Lawler of Lawler Athletics who clocked 11.69, and Fresno teammate Pipion Ceonna who tied 12.11. Kyla currently has the leading time in South East Asia for 2022.

Kyla Richardson was the only Filipino track athlete to participate at the Bryan Clay Invitational in Los Angeles. Kyla clocked 11.82 +2.3 m/s to finish 5th in Heat 2 of the Invitational Women’s 100m.
The race was won by RosAngela Santos of the Brazilian National Team (Brazil sprinters team is based in Los Angeles), who clocked 11.26.
Former World Junior Champion Candace Hill (USA) had the fastest time in the heats of 11.13 (+1.5).
Kyla’s time rounded up 11th overall, so she missed the final by 3 spots. The Final is tomorrow. A few weeks ago, Kyla had run a PB of 11.65. 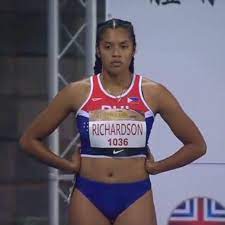 Representing Fresno State, she won the California Poly – 4 Way meet on April 3 in San Luis, California.  Improving on her school record of 11.85 set 2 weeks ago. She beat teammate Kyra Bailey who was second and Danielle Shelby.

The performance moves her from 9th to 6th on the All-Time Lists for Philippines Women’s 100m.

Kyla Richardson has opened 2021 with an

Her time of 11.85 was set on 24th March at the State Centre invitational in Fresno.

At the Cougar Invitational meet in Los Angeles, 17-year-old Kyla Richardson, who has battled with hamstring injuries for the past 12 months, registered a decent albeit slightly wind-aided 100-meter performance of 12.07 (+2.5). As a result, Kyla, whose best time is 11.93 in 2013, sees a spot in the revitalized women’s 4×100 Relay for the Singapore SEA Games. Princess Joy Griffey (11.62) and Kayla Richardson (11.78) currently occupy the two spots on the women’s 100m Dash.

Twin sister Kayla who has had the flu will be racing next week.

Young sprinters of Filipino origin both delivered excellent performances at the  Arcadia Invitational last weekend. Kayla Richardson, who turns 15 next month, broke the 15-year-old Best Mark of Baynard (25.04 last year), with a new personal best of 24.52 (-0.3), winning the seeded (second timed final) at the Arcadia Invite.

Caleb Monticalvo again leaped 5.02m; however, his 5.05m has not been ratified as a National Record as he still needs to supply a Filipino Passport to the PATAFA.

The Philippines ‘ fastest female over 100-200m who ran 12.00et and 24.12et last year, 14-year-old Kyla Richardson, had a very narrow win over her twin sister Kayla this weekend. Twin sister Kayla had a great start and looked like she had gotten away, but Kyla, who does not like to lose, came back with a strong finish to edge her out.

They both opened 2013 with personal best times of 7.85 and 7.89 at Cerritos All-comers meet on Saturday in Los Angeles, finishing 1-2 in their race. Kyla’s previous best was 7.94 at Azusa last February and Kayla whose previous was 8.1. Judging by these performances, it equates to a clocking of 12.00 to 12.20 at a worst-case scenario on the track right now. 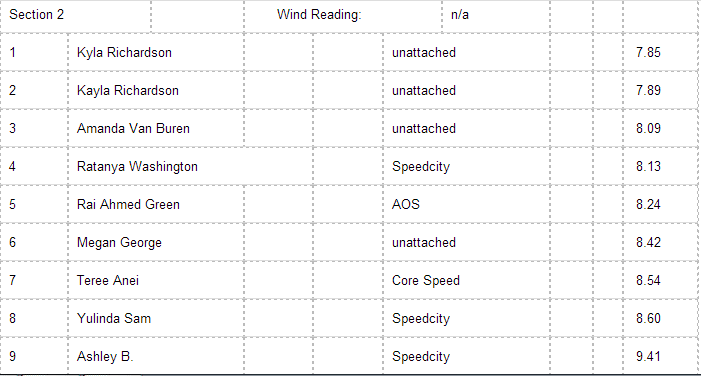 The twins later teamed in a relay team with the Academy of speed, which blew away their opponents by eight seconds in the 4×200, winning in 1:40.73; Kyla ran the second leg Kayla ran fourth.  This time equates to 25 seconds for each runner, or it’s indoors, probably around 24-24.5 on an outdoor track due to the tight bends.

The girls are running great and have almost acquired their Filipino passports. Both are enjoying their training with the Academy of Speed right now, which only started in December; they had a well-earned rest after peaking last May.  They will run at Irvine next week.

The twins are looking forward to participating in the Philippine National Games in May to line up in the Junior Sprint events. Following that will be the ASEAN Youth Champs in South Vietnam in June.

Kyla Richardson is in Good Form 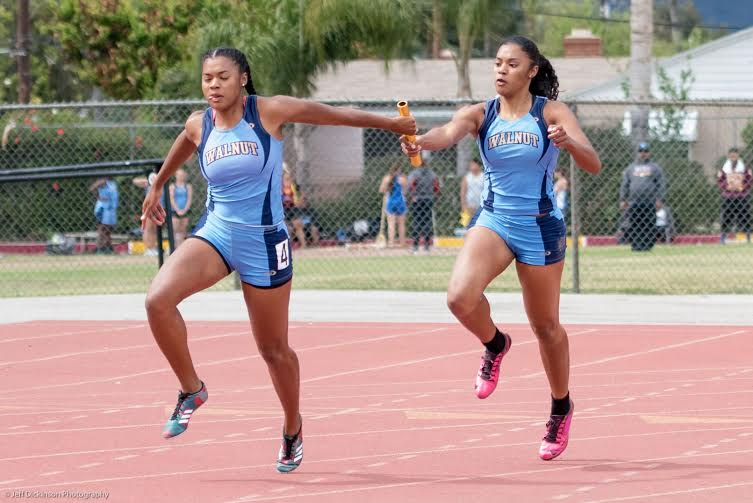 14-year-old twins Kyla and Kayla Richardson continued their fine form over the much shorter 55m at the UC Irvine open meet on Saturday 2nd February.  Kyla registered a winning time of 7.28, and Kayla 7.41 placed third. On conversion, these times are around 11.80 and 12.20 for the 100m.

Jon Gilmer coached the girls from the Academy of Speed.

Last year’s fastest Filipina over 100 and 200m 14-year-old Kyla Richardson clocked a season opener of 12.25s (0.0)  at the Azusa Pacific University All comers. Kyla is the front-runner for the National Junior title at the PNG in May.