There is only one thing I love more in athletics than watching a young athlete pursue a pathway from grassroots to elite. That is watching an athlete overcome barriers that make them into a better athlete. 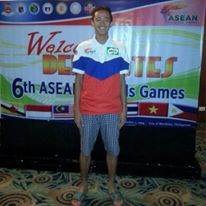 As the Team Manager for the 2014 ASEAN School Games team, and handpicking a group of 35 young athletes Under 18 from across the country, using a scaled selection method.

I always wondered how successful these athletes would be. Some of these kids were quite good and endured a lot of success at the college level and even got to play overseas meets or joined the national training pool; some of the good ones also dropped out from the sport.

It was a young man who was not particularly brilliant but went on impress and proved me wrong afterward even though he had a fairly miserable and unimpressive ASEAN School Games.

His name was Kirk Bacas; Kirk Bacas came from Cagayan De Oro. He had spent some time training with an old friend of mine and former national coach Alexander Ligtas (himself a national long jumper in his youth). Kirk Bacas was the silver medalist in Laguna 2014 and a 14-meter triple jumper.

The tall, gangly teenager was a shy type who seemed to lack a bit of self-esteem. However, one of our team coaches, Miguel Arca, instantly took a liking to the boy. Kirk quickly struck up a friendship with Jerry Belibestre (Miguel’s jumper).

The quencher came when Kirk was partnered with his much more illustrious teammate, the 6’1 Martin Esteban of Pampanga. He was attending the practice the day before the ASEAN School Games, and his morale and hopes dropped to an all-time low; he saw his much larger and stronger opponents. 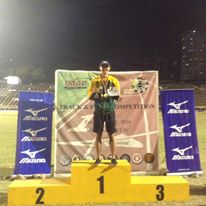 Kirk expressed his nervousness and lack of confidence bluntly on Facebook with this message.

It was an unrattling game for Kirk, who was so nervous he underperformed with a 13-meter jump. Esteban went onto take the silver medal for the Philippines. At that point, he almost felt like walking away from the sport.

At this point, everyone, including myself, seemed to think that Bacas’s career was completely made. But he proved us all wrong the following year. Bacas did gain a bit from this trip, but he also decided he would study at FEU. In fact, he spent most of his remaining trip staying with his friends in the dorms of FEU. ASEAN School Games teammate Bryan Pachecho who won the Shot put, had already decided to go to FEU.

Bacas string of bad luck came to an end in 2015, when as a freshman at FEU, he secured the ROOKIE MVP.  He won the Triple Jump Gold and the Long Jump Silver. More recently, Kirk got bronze in the long and triple jump at the Philippine University Games a few days ago in Dumaguete. It’s good seeing how he was able to turn his luck around. And prove to everyone he was a little bit less hopeless after all. 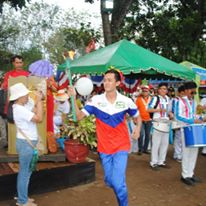