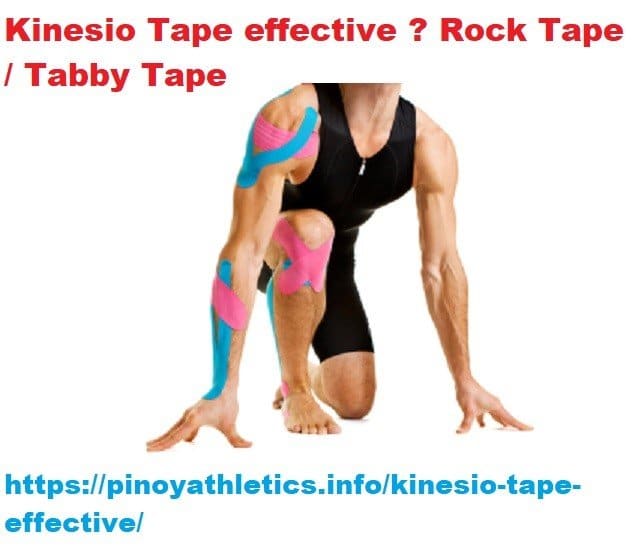 Today I’m going to write about a special kind of tape that helps promote blood flow to the muscles. And aid in recovery and injury prevention. While I first heard of Kinesio tape a few years back.  When my friend who is a part-time runner. And now on a collegiate scholarship playing American football started using it. While it just looks like masking tape, he stated it was very effective.

I also noted another friend Mary Joy Tabal a prominent road runner in the Philippines started using the full application taping methods of the Kinesio tape for the entire leg. It then became known as ‘Tabby Tape’

While the other day when I had my deep tissue massage my psio started telling me about a better version of Kinesio called Rock Tape. Yet my Physio swore by it and said it had really fixed up thumb problems he had for years.

Only after a few weeks of use and significantly reduced his knee pain. I then decided to go on E-bay and buy some, I ordered some from the UK and after 7 days (custom delays) it arrived.

I taped my foot, knee area, groin and calve and it was really effective. It helped speed up recovery between sessions. The other thing I liked about it compared to standard tape and joint supporters. It was so light you can’t even feel that it is there when you have it on and allows full range and freedom of movements.

A non-elastic tape is a typical way most athletes apply tape. This ends up stabilizing them at the cost of restricting movement.

Hence Kinesio(TM) taping has a  much broader range of applications. The tape is 140% the elasticity of human skin.

Also by skillfully applying the tape to specific structures with a particular amount of stretch on the tape different effects can be achieved. Some of these effects include: muscle inhibition, muscle facilitation, increased circulation,  increased lymphatic drainage (to reduce swelling), pain relief, functional correction, and increased range of motion.

The effect that there is the most evidence to support is lymphatic drainage.

The reduction of swelling, edema, and bruising with Kinesio Tape (TM).

There is also evidence to indicate that it can improve the proprioception in some joints.  Possibly reducing the likelihood of an injury such as an ankle sprain.

Beyond sporting applications, Kinesio(TM) taping is used to treat discomfort associated with pregnancy, infant colic, and digestive disorders. And TMJ disorders to name a few conditions.

Although there is a certification for Kinesio(TM) taping. The application of the tape may be done without certification.

Kinesio Taping gives support and stability to your joints and muscles without affecting circulation and range of motion. It is also used for Preventive Maintenance, Edema, and to treat pain.

Kinesio Taping is a technique based on the body’s own natural healing process. This Kinesio Taping exhibits its efficacy through the activation of neurological and circulatory systems.

This method basically stems from the science of Kinesiology. Hence the name “Kinesio”.  Movements of the body are not only due to Muscles.  But also control the circulation of venous and lymph flows, body temperature, etc. Therefore, the failure of the muscles to function properly induces various kinds of symptoms.

Consequently, so much attention was given to the importance of muscle function that the idea of treating the muscles in order to activate the body’s own healing process came about. Using an elastic tape, it was discovered that muscles and other tissues could be helped by outside assistance. Employment of Kinesio Taping creates a totally new approach to treating nerves, muscles, and organs.

The first application of Kinesio Taping was for a patient with articular disorders.

For the first 10 years, orthopaedists, chiropractors, acupuncturists and other medical practitioners were the main users of Kinesio Taping. Soon thereafter. Japanese Olympic Volleyball players were the first to use Kinesio Tape. And word quickly spread to other athletes.

While Today, Kinesio Taping is used by medical practitioners and athletes around the world. The Kinesio Taping Method is applied over muscles to reduce pain and inflammation, relax overused tired muscles. And to support muscles in movement on a 24hr/day basis. It is a non-restrictive type of taping which allows for a full range of motion.

Joint Stabilization and support in traditional sports are by wrapping tape.

Therefore during a sporting event obstructing the flow of bodily fluids as an UNDESIRABLE side-effect.

Anything from headaches to foot problems and everything in between is use for Kinesio Tape.

Read this article on how to get rid of sore muscles.