Kayla Richardson is PinoyAthletics Female Athlete of the Year 2022

2022 was a stellar year for Kayla Richardson. Against all odds, Kayla regained the 100m SEA Games crown she had won 7 long years ago as a starry-eyed teenager in Singapore in 2015. Like she had done in Singapore, it was again a blanket finish with the 5’10 Kayla storming over the top of the best South East Asia had to offer. Kayla’s second Gold in the centerpiece 100m Dash in Hanoi, has only ever been surpassed by the late great Lydia De Vega Mercado who has 3 wins. In Cambodia next year Kayla will try and match this great feat.

Richardson whose mother hails from Zamboanga Sibugay was both concurrently the 2015 Junior and Senior Female Athlete of the Year, the only athlete besides Zion Nelson to ever achieve the double award.

Kayla still holds the Philippine Junior Record in the 100m at 11.65.

Richardson’s MVP title also marks the end of Kristina Knott four year winning streak as MVP Female mainly due to being sidelined by an injury, with Knott expected to return to regular competition this coming season.

Richardson beat out Sarah Dequinan who took silver and broke the Filipino Record in Heptathlon, Christine Hallasgo for silver in SEA Games Marathon, and Shiloh Corrales-Nelson for setting the Philippine Record in Hammer. 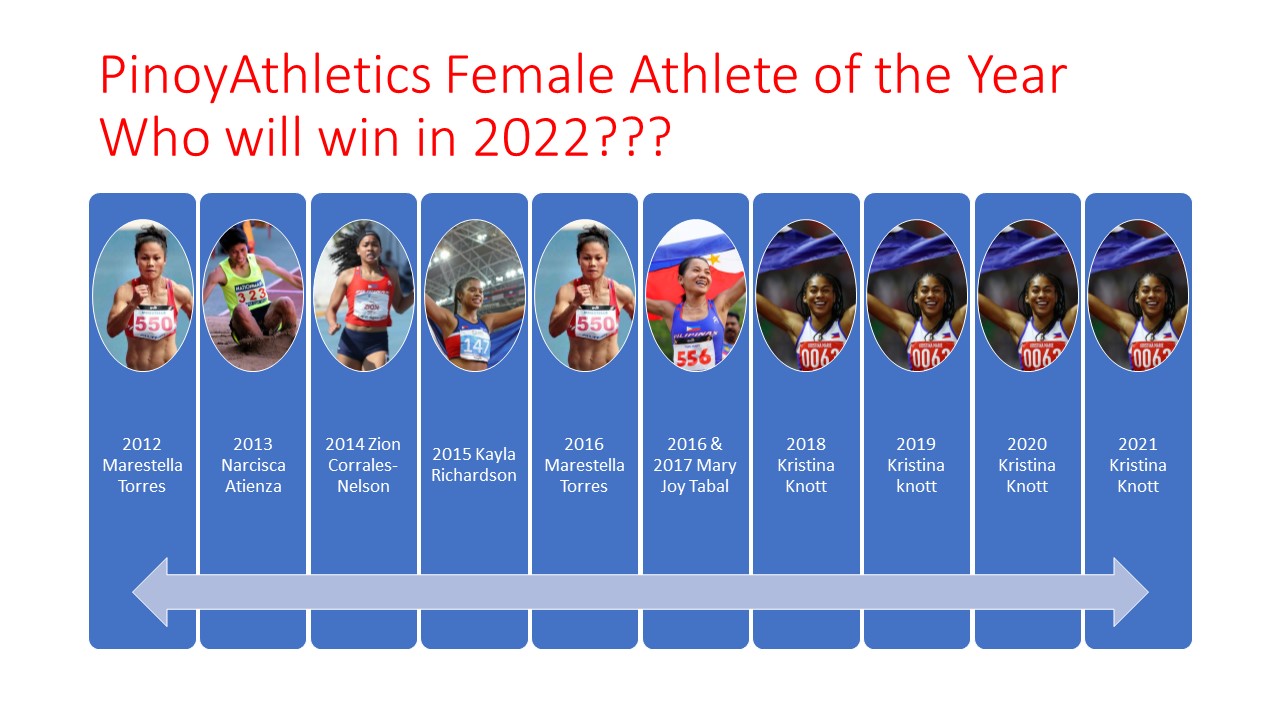 Kayla Richardson after 7 years finally regains her SEA Games 100m title!!! In the most dramatic of races the top 4 only .07 apart. She narrowly held off Veronica Shanti of Singapore who won the 200m on the 1st day. Kayla Richardson clocked 11.60, Shanti 11.62, and Poolkred of Thailand 11.66 for bronze. The Teenage sprinter Valentin of Indonesia was 4th in 11.67.

Kayla Richardson the 2015 SEA Games 100m Champion and 200m Silver Medalist roared away to the SEA Season lead in the 200m shattering her long-time personal best of 23.67 from the 2015 SEA Games where she took silver with a time of 23.19! into a -0.4 headwind. At the Oxy Invitational on May 7. Richardson took the lead from her twin sister Kyla who had clocked 23.50 recently.

The 24-year-old Kayla placed 2nd and was just half a second behind Olympic 5th placer Marie Talou of the Ivory Coast who won in a cruisy 22.68. The Philippine Record of Kristina Knott stands at 23.01, Zion Nelson had run 23.18, so Kayla now ranks 3rd on the Philippines All-Time Lists.

With the world championship qualifying mark at 22.80. It is now a competitive playing field in Philippines Athletics in women’s sprints.

Kayla will participate in the 100 and 200 next week at the Hanoi SEA Games as well as join the 4×100 team of Kyla, Robyn Brown, and Eloiza Luzon.

Unfortunately, the performance did not Kayla into the top 24 to advance to the semi-finals with Kayla finishing 38 out of the 48 entries. She is not entered/qualified in the 200m start list.

Also at the West NCAA Div 1 Finals Filipino Javelin Thrower Cerah Moren threw 45.78m but failed to advance to the next round. In the Div 2 Finals, Kyla Richardson clocked 11.85 finishing 4th in her heat and 11th overall missing out on the final by 2 places.

*Any Media using information from this article must quote Pinoyathletics.info

This mark ties her run set 7 years ago of 11.65 at the CIF Finals, which is still the Philippines Junior Record in the 100 Meter Women’s.

She now also has the same PB as her sister Kyla Richardson at 11.65. Kyla and Kayla are ranked 6th and 7th on the Philippines All-Time lists in Women’s 100m.

Kayla Richardson representing hosts UC Irvine had clocked a windy 11.84 +3.1 finishing second in her heat and second qualifying into the finals behind Hailey Murdica of California Fullerton on Friday.

*Any Media using information from this article must quote Pinoyathletics.info 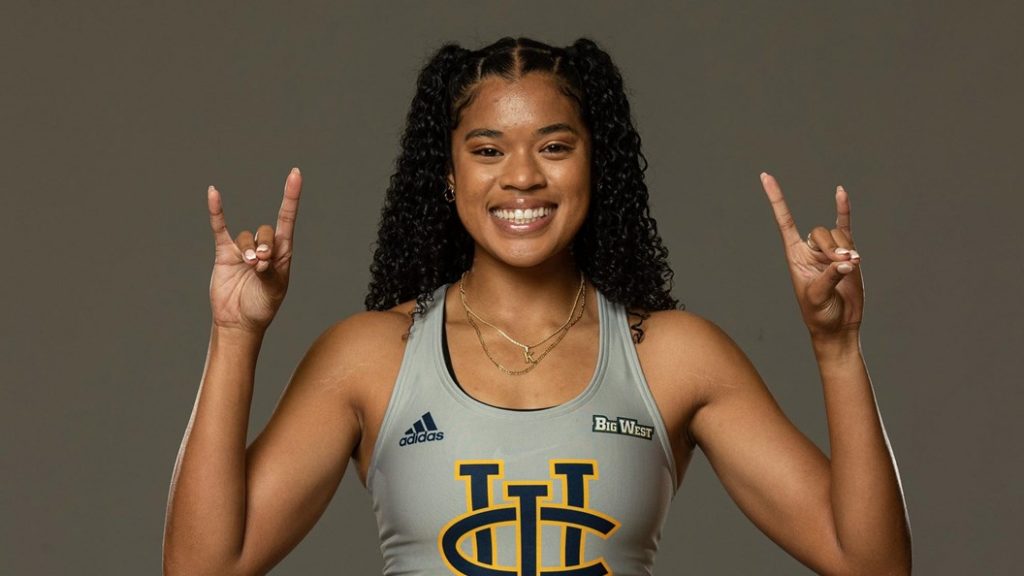 It was a return for form for Kayla. As a starry-eyed 17-year-old was the surprise winner of the blue ribband century dash at the 2015 SEA Games in Singapore.

Richardson’s personal best of 11.65 was set in 2015 when she broke the Philippine Junior record at the CIF meet leading up to the SEA Games, which still stands. The last time Kayla broke 12 seconds was in 2016 when she ran 11.79.

Richardson holds a Personal best of 23.67 set in the heats of the 2015 SEA Games. She also currently holds the Philippine Junior and Senior Record in 400m at 53.81.

Both times of 11.80 and 24.19 by Kayla Richardson are season-leading times for 2021 South East Asian Ranking Lists.

Apart from the 4×100 National Record and Bronze. It was a rather disappointing 2017 SEA Games for Kayla  Richardson.

Kayla Richardson went in as the defending champion from the 2015 SEA Games in the 100m and Silver in the 200m.

But she skipped her 100m title defense and wound up a disappointing 5th in Kuala Lumpur’s last SEA Games.

Meanwhile, her twin sister Kyla Ashley Richardson clocked a wind-aided 24.43 (3.1) second place in the C-Race. Her first run in over a year at any individual event.

Meanwhile, SEA Games 3x 400 Hurdles Champion Eric Cray helped himself to a PB at the UTEP Spring Time meet in El Paso over 400m. Cray timed 47.67 breaking his mark of 48.28 from 2 years ago.

He rarely runs the distance. Cray improved on the 50.28 indoors he ran earlier in the year. He is now ranked 2nd behind Anthony Beram over 400m for 2018 in South East Asia.

Some More Results to be updated in this article later today; stay posted. Please Bookmark Pinoyathletics and like our page on Facebook, and Follow us on Twitter for all the latest updates on Philippine Athletics.

Kayla Richardson has established a new Philippine National Indoor Record in the 400m Dash. Kayla Richardson clocked 54.94 to place, finishing 5th in Heat 1. Richardson turns 20 in a few months and is competing for the University of Southern California.

And set the record at the Martin Luther King to Invite in Albuquerque, New Mexico, on January 20.

At a guess, 54.94 is about the one-second difference in the outdoor, so it gives Kayla Richardson an early season 53.9, which is near her PB, not bad for a first race of the season. Kayla Richardson is currently being guided by the 1992 Olympic Champion Quincy Watts.