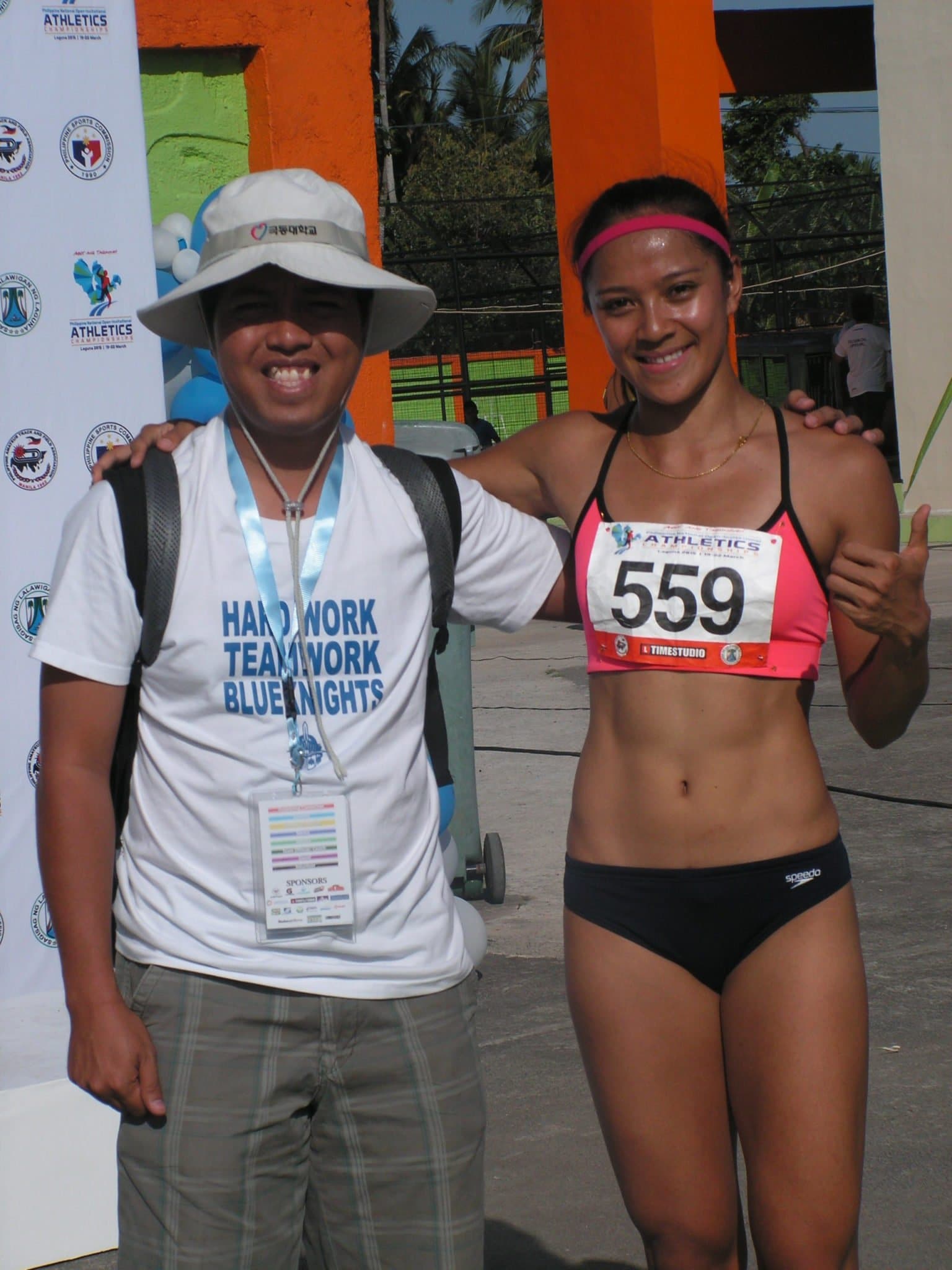 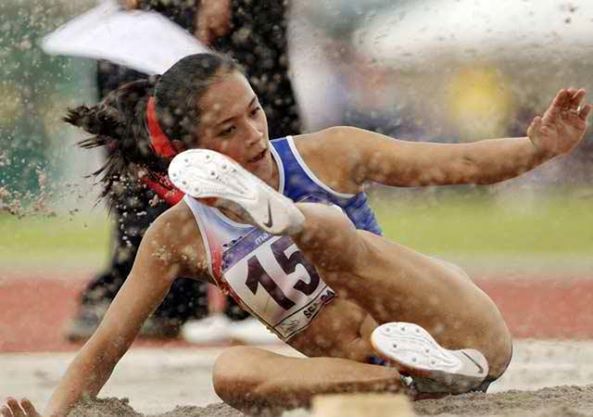 In conclusion, this was an incredible initial breakthrough in performance. Katherine Khay Santos being a mediocre collegiate athlete with 5.49m to now a serious contender at the SEA Games.

Also, Katherine Khay Santos’s leap of 6.09m was good enough to get her special consideration for selection for the 2011 National Games.

Consequently, she did not waste this opportunity to take the Bronze medal due to finishing behind Marestella Torres and Maria Natalia Londa of Indonesia.

While Marestella focused on the bigger meets and then took leave from the sport to give birth, Santos stepped out of the shadows to capture two Long Jump national titles despite having a finishing runner-up the previous two years.

Also, Khay was a member of the 4x100m women’s relay squad.

They took a bronze medal behind Thailand and Malaysia’s national team at the 2013 Thailand National Open.

Furthermore, the family has always been significant to Kath.

Some setbacks and family issues hindered her performance in the past year. But now, she is back on track and very focused on getting back to the 2015 SEA Games.

Katherine Khay Santos has again been named in the very potential relay squad as she is both a long jumper and sprinter.

However, at the 2015 SEA Games, Khay was a very close fourth in the Long Jump with a leap of 6.40m tying her personal best but just missing out on the Bronze medal (6.41m) taken by her teammate Marestella Torres.

Khay will primarily compete in the Long Jump but maybe be a reserve runner in the 4×100 relay.

Khay attended her first SEA Games in 2011 and took Bronze in the Long Jump with a 6.25m effort.

Having won the Malaysian Open in 5.83m, Khay will face a powerful challenge at her third, and fourth SEA Games. The top three from 2015 are all present.

Struggling with Injuries for most of 2017. Khay originally was lined up in the SEA Games

4×100 but gave way to Eloiza Luzon, who was showing rapid improvements.

Santos placed 5th in the 2017 SEA Games in 6.18m which was her best performance in over a year.

It was still not enough as it was her third straight SEA Games in a row without a medal.

PATAFA Management removed her from the national team in September 2017.

2011 SEA Games Bronze medalist Katherine Khay Santos whose previous performance of 6.27m, had been deemed invalid due to it being at an unsanctioned USA Track and Field meet, showed this performance was no fluke.

And Kath followed up at the prestigious Ben Brown Invitational (USTF Certified meet) with a leap of 6.17m with a 0.0 wind.

The mark was above the 6.15m bronze medal performance in the 2013 SEA Games in Myanmar.

Katherine Khay Santos a Warrior to Be 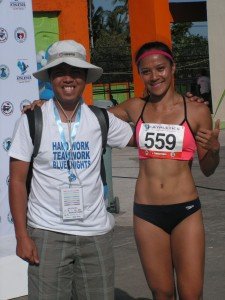 Katherine “Khay” Santos, a proud University of Baguio, snatched one of the bronze medals in the recent Southeast Asian Games held in Palembang, Jakarta, Indonesia. Katherine is a long-time athlete; she’s been engaged in sports since elementary now. She loves running and playing her events in jumping.

Entering college life for her made her realize the hardship of studying and playing her interest in sports. However, she’s still determined to finish her studies and be a varsity player at the same time. Khay is a full scholar of the University of Baguio and receives incentives for representing the school in different invitational games.

Katherine as a teammate

According to Ellamae Delos Santos, a former teammate of Khay, she used to be a model in

the team and always gives advice that helps her co-athlete.

“She encourages us to train more and harder because it is also for our own improvement”.

Katherine is an athlete

“Khay is a hard working athlete. She  tries to manage her time in training and studies in a balanced manner,” he said.

Eduardo Laureano, Athletic Director of the University of Baguio happily said that  he is very proud to have Khay as her athlete.

“Whenever she didn’t reach her  standard performance in trainings she does her best to cope up in the next training.

Lerma Gabito a former Olympian, one of the mentors and coach of Khay proudly  said that Khay is such an optimistic person.

Khay as a student…

Katherine is such a jolly person inside the four corners of the classroom, according to Micahel Vinluan, her former classmate in some of her subjects.

Khay considers her classmates always in any situation and always deals with them properly, he added.

Katherine “Khay” Santos has plans in entering the Philippine Team but still wishes to work in the tourism management. “ Dreams will be fulfilled if you strive harder”, she said. And the last thing that she can advice to her co athletes and those other who dream to become a famous athlete someday is that “Discipline is what it takes”.

The reckoning day draws nearer with seven weeks for athletes to qualify for the SEA Games athletics team.

Many had written off an athlete who sent a message that sent ripples through the Philippine Athletic world, proving she was far from done.

At a small invitational meet near the famous Paramount Studios in Los Angeles, Katherine Khay Santos finally erased her personal best with a 6.27m (+0.6) leap, good enough to pass the 6.14m bronze medal standard from the 2013 SEA Games.

Khay became the 28th athlete to hit the SEA Games standard in Athletics for 2015.
Her previous mark was 6.25m, set what seemed like a lifetime ago four long years ago at the 2011 SEA Games in Palembang.

God had given Kath another chance.

The goal-driven 21-year-old from Baguio took the Bronze medal from her much more prestigious protégé Marestella Torres.

It was a meteoric rise for the University of Baguio student Kath, going from a 5.50m Collegiate Long Jumper to the SEA Games bronze.

I was happy, it’s my first competition that all my jumps are over 6meters plus, and had a new personal record (PR) but at some point I’m disappointed because I didn’t hit the gold standard, because everytime you compete you should be thinking of getting a gold, anything else will be a disappointment, we train hard to be the best, and we push ourselves to the limit.

Kath went from being an athlete trying to make her way in the harsh world of Philippine Sports to an ambassador of the sport who encourages and inspires many young girls who want to emulate her achievements.

Yes, my attitude changes from experience in daily living, no matter what circumstances you go through, just push through it, learn everyday, grow, and be better than you were yesterday, in that way you’ll be a better person and a better athlete.

With Marestella pregnant and semi-retired, the high expectations fell on Kath to fill the void. While she didn’t live up to the demands of an athletic public hungry to see another Long Jump champion emerge.

After this, Kath had to endure a Filipino athlete’s hard life losing her priority allowance from the government, but a much more devastating event would leave her more emotionally destroyed, news of the sudden murder of her brother Darren Santos.

Yes, I almost give up, I lost hope, But because of God, Friends, and my family I’m still here making my dreams come true.
God , who give me the strength to keep going, friends for always being there for me, and specially my Family who give me the love, support and guidance that I need all the way here in Temecula, and now I can say it’s a journey worthwhile.

Santos, whose earnings support her family, did the best she could to keep her promises to several people, including herself.

She would even sell women’s sportswear ‘Jazzy Girl line’ to supplement their family income.‘

It was due kindness of one coach Jerry Cablayan who invited Kath to train with him in the United States .

Within less than two months of training Kath broke her PB (4 years old) and her body fat looks like it has lowered significantly due to a healthy diet/ Maybe its time we start feeding the athletes right? With a well controlled diet.